From January 1 to October 25, 2021, 25 political parties received donations totaling GEL 23,227,322, of which 71% - GEL 16,585,660 went to the ruling Georgian Dream - Democratic Georgia party, Lelo for Georgia was second with GEL 2,330,556, and the United National Movement was third with GEL 2,212,912. In addition, the companies connected with the donors of the ruling party had won public tenders worth about GEL 155 million and simplified public procurement contracts of GEL 6 million. During the same period, the donors directly or indirectly affiliated with these companies, contributed over GEL 3 million for the benefit of Georgian Dream - Democratic Georgia.

On September 28, Transparency International Georgia (TI Georgia) published an interim report on the finances of 2021 municipal election campaign, which reviewed and analyzed revenues, expenditures declared by election subjects and other related issues. The final report is scheduled for publication later this year, however, as the second round of municipal elections will be held across the country on October 30, updated information on party finances may be of interest to the public before the election.

From the day of announcing the Election Day, all candidates / election subjects are obliged to submit financial reports to the State Audit Office (SAO) once in three weeks in the prescribed form. From August 2, the election subjects have already sent 3 three-week financial reports to the SAO, thus presenting the revenues and expenditures received during the period of August 2 – October 2. The exception is the information on donations received by parties, which is available without their financial declarations. Political parties send this information to the SAO within 5 days of their receipt, which publicizes it on its website. Therefore, we present the updated information on the donations received by Georgian political parties from January 1 to October 25, 2021.

Political party donations have always been a matter of great public interest in Georgia. Georgia is a small, middle-income country, and generous contributions to political parties often raise legitimate questions regarding real individuals and entities behind the financial transactions and whether or not these donations are made as part of a corrupt deal.

According to the information posted on the website of the SAO, from January 1 to October 25 of this year, 25 Georgian political parties have received donations of any kind. More specifically, these political parties received donations totaling GEL 23,227,322, of which 71% - GEL 16,585,660 went to the ruling Georgian Dream - Democratic Georgia party, Lelo for Georgia was second with GEL 2,330,556, and the United National Movement was third with GEL 2,212,912 (See Graph). 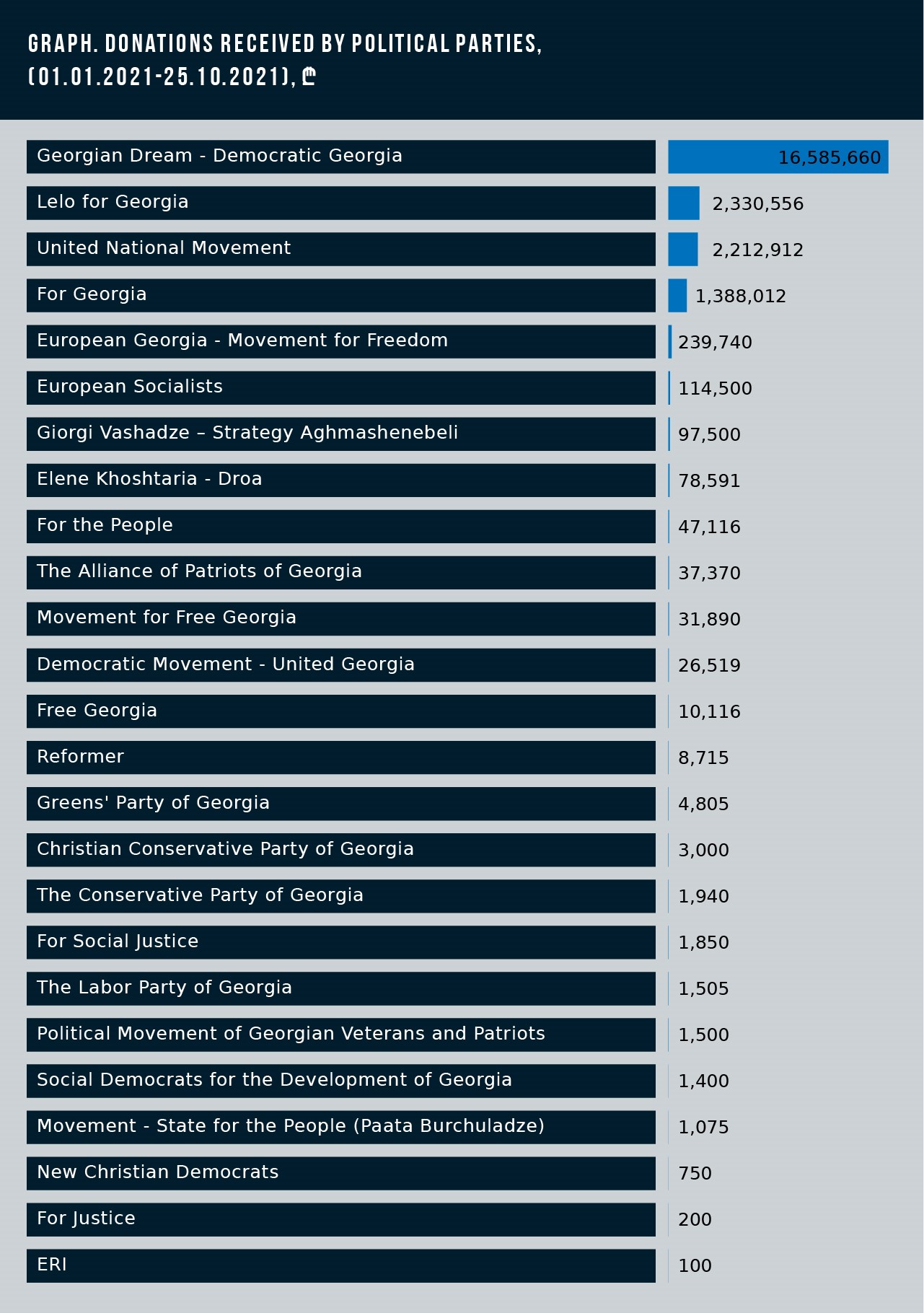 Donations received by the ruling party are more likely to be accompanied by particularly high risks of political corruption, because the authorities have the lever to make a deal with a potential donor in return for certain benefits. For this reason, in our research we put a special emphasis on the donors of the Georgian Dream – Democratic Georgia. In particular, we looked at how many of them were connected with companies that received certain benefits from public procurement this year.

As it turned out, the companies connected with the donors of the ruling party had won public tenders worth about GEL 155 million and simplified public procurement contracts of GEL 6 million. During the same period, the donors directly or indirectly affiliated with these companies, contributed over GEL 3 million for the benefit of the Georgian Dream - Democratic Georgia.

Anagi LLC is also worth noting since it is one of the largest public contractors. This company won tenders worth more than GEL 22 million in 2021. Davit Andghuladze, a company affiliate, and his business partner Giorgi Chitashvili donated a total of GEL 110,000 to the ruling party.

Another large state contractor is Arali LLC, which won public tenders of GEL 20.6 million in 2021, while its owner, Demetre Tateshvili, contributed GEL 50,000 to the ruling party. TI Georgia has previously written about large public procurement contracts of Tateshvili’s companies and corruption risks in the process.

Zimo LLC, a company affiliated with former Prime Minister and founder of the ruling party Bidzina Ivanishvili, has also been among the major state contractors. This company won  public tenders of about GEL 13.2 million during the year, and persons in various ways connected with Ivanishvili and this business group donated a total of over half a million GEL to the Georgian Dream - Democratic Georgia during the same period. It is noteworthy that individuals in this group donate substantial sums of money to the ruling party almost every year, and this usually happens in a very short time - at intervals of 1-2 days.

As in other years, Arsakidze-2000 LLC, a company that won public tenders of about GEL 4 million in 2021, also was noteworthy. The owners of this company are also affiliated with Lilo-Mall LLC, a large business group whose partners have been one of the largest political donors for years, and who, like those affiliated with Bidzina Ivanishvili, usually donate money to the ruling party in a short period of time.

Another company that is among the 10 largest state contractors is Ibolia LLC, which donated GEL 20,000 to Georgian Dream - Democratic Georgia. TI Georgia has written numerous times about receiving tens of millions of GEL worth of public procurement contracts in suspicious circumstances by the company, its owner, former MP Ioseb Makrakhidze, and his family members. 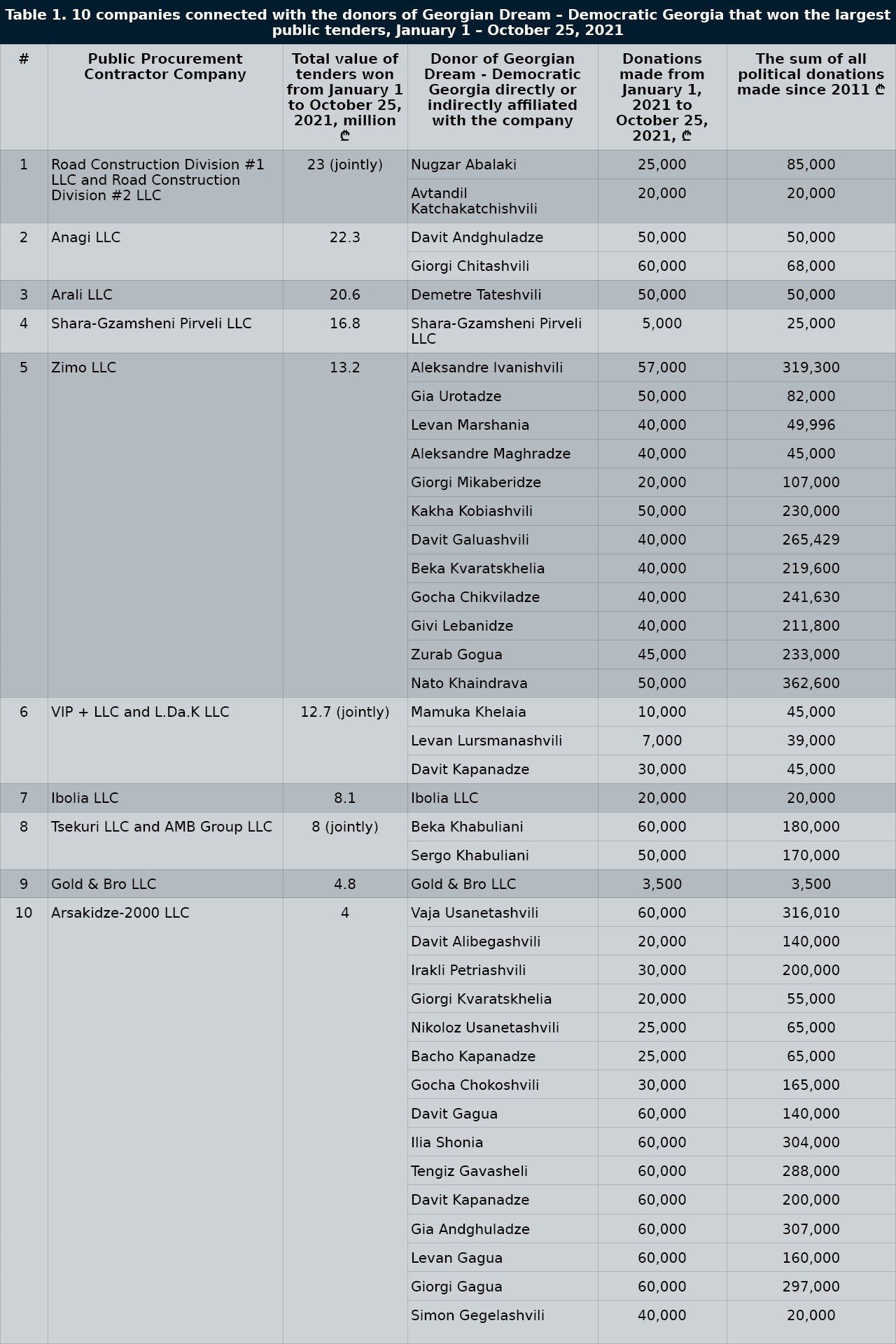 As for the simplified public procurement contracts received by the donors of the ruling party or their companies, the five largest such companies are given in Table 2. Of these five, JSC Rustavi Central Hospital stands out, having received a simplified public procurement contracts worth GEL 3.2 million during the year. Its director, Papuna Bakhtadze, donated GEL 55,000 to the ruling party. It should be noted that the largest part of this amount came from a single contract worth GEL 2.5 million, which was given to the company by the LEPL National Health Agency as part of the management of the COVID-19 epidemic.

Another company that during the year received simplified public procurement contracts worth about half a million GEL was New Tiflis LLC, which is affiliated with above-mentioned business group of Arsakidze-2000 LLC and Lilo-Mall LLC. 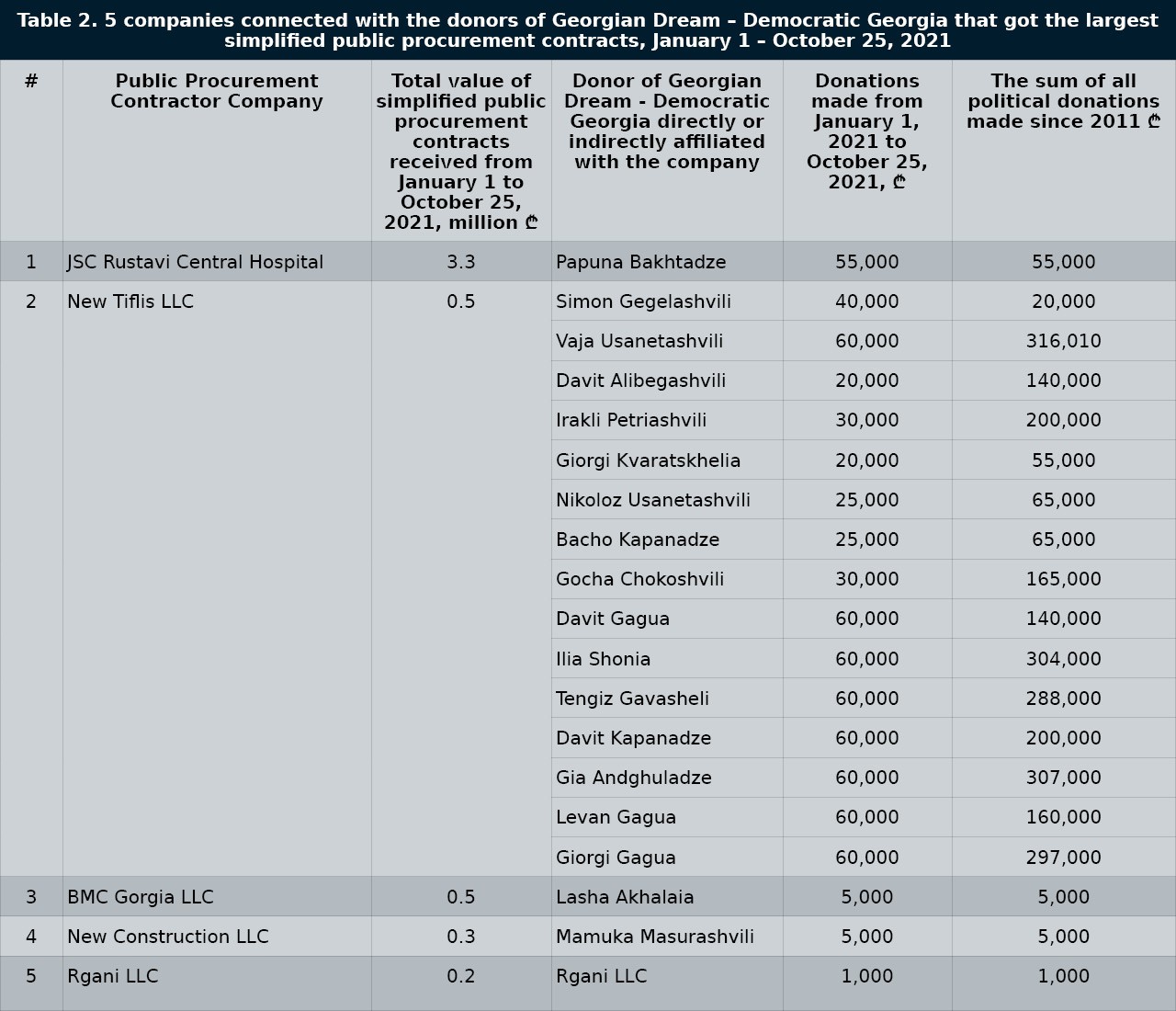