The year 2016 saw a number of important changes on the advertising market. The changes included the creation of one sales house which sells the advertising time of all large TV stations, as well as the founding of a new media holding which brings together the TV stations Imedi, Maestro and GDS. At the same time, two rating measurement companies continue to operate on the market.

According to the information on the analytical portal of the Georgian National Communications Commission, TV stations’ advertising revenues (revenues from advertising and sponsorship) in 2016 amounted to GEL 83.7 million (USD 35.3 million), which exceeded the previous year’s revenues by about GEL 10 m. (USD 3 million).

The advertising revenues in lari have increased by 14.5% and those in U.S. dollar – by about 10%. However, it is important to take into account the sums that political parties spent on advertising in the election period, the total amount of which amounted to GEL 9 million. With the exception of this sum, the commercial revenues received by TV stations were approximately equal to the revenues of the previous year. 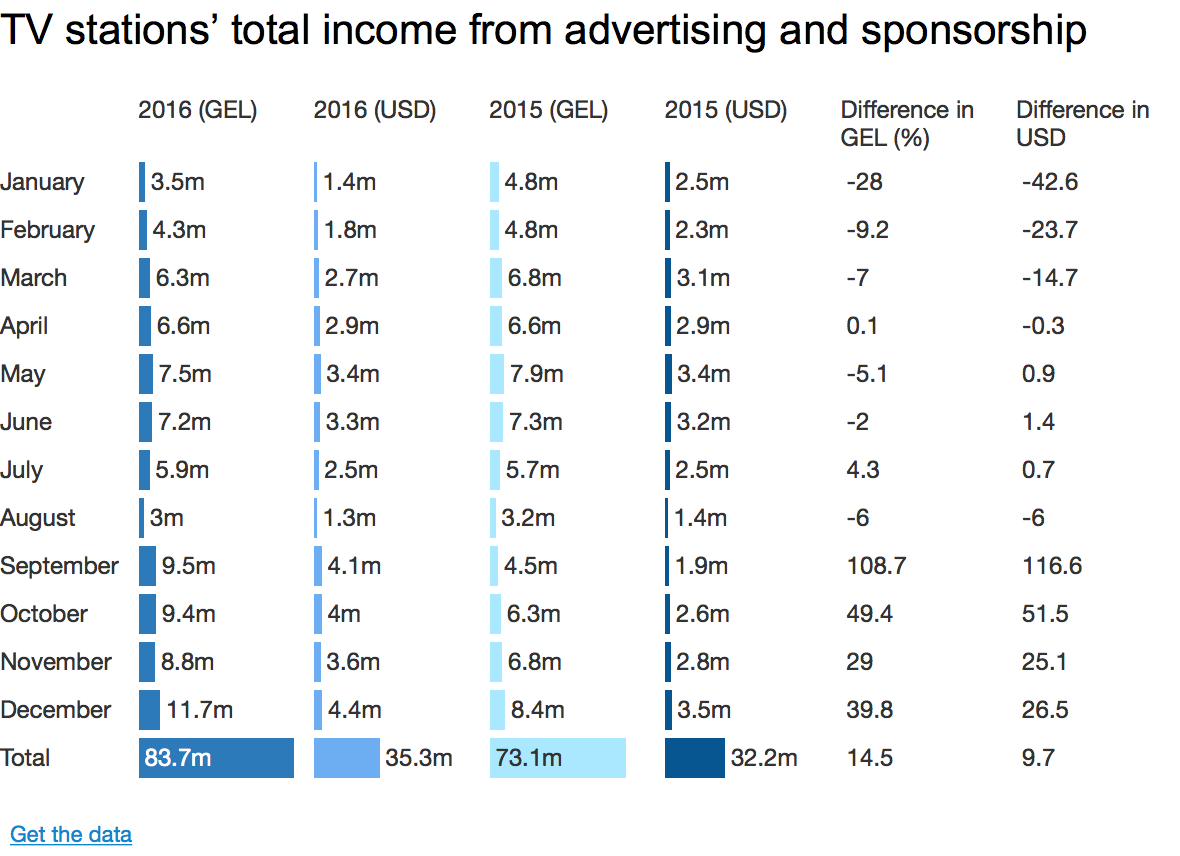 The revenues of the two largest TV stations on the market – Rustavi 2 and Imedi – has not changed significantly compared with the previous year.

At a meeting with TI Georgia, advertising sales representatives of Rustavi 2 and Imedi explained that the small increases observed in the advertising revenues were mainly due to the sums received from political advertising and the elections.

According to Alexander Skrebnev, the representative of Imedi, the channels received a part of the revenues from political advertising, and the large channels’ commercial revenues in the national currency decreased by 14% compared with the previous year. This view is also shared by the advertising sales representative of Rustavi 2 who pointed out that, if we exclude political advertising from the revenues, the channel’s advertising revenues had in fact decreased compared with the previous year.

The representatives of the TV stations cited the economic situation in the country and the depreciation of the lari as the main reasons for the decrease in the advertising revenues. Although representatives of various channels pointed out that the legislative changes of 2015 (hourly restriction of advertising time, stricter regulations on sponsorship) had caused inconvenience in planning programming schedules and expressed their discontent with new regulations on sponsorship, they didn’t say that these regulations had exerted a considerable direct impact on the amount of revenues. 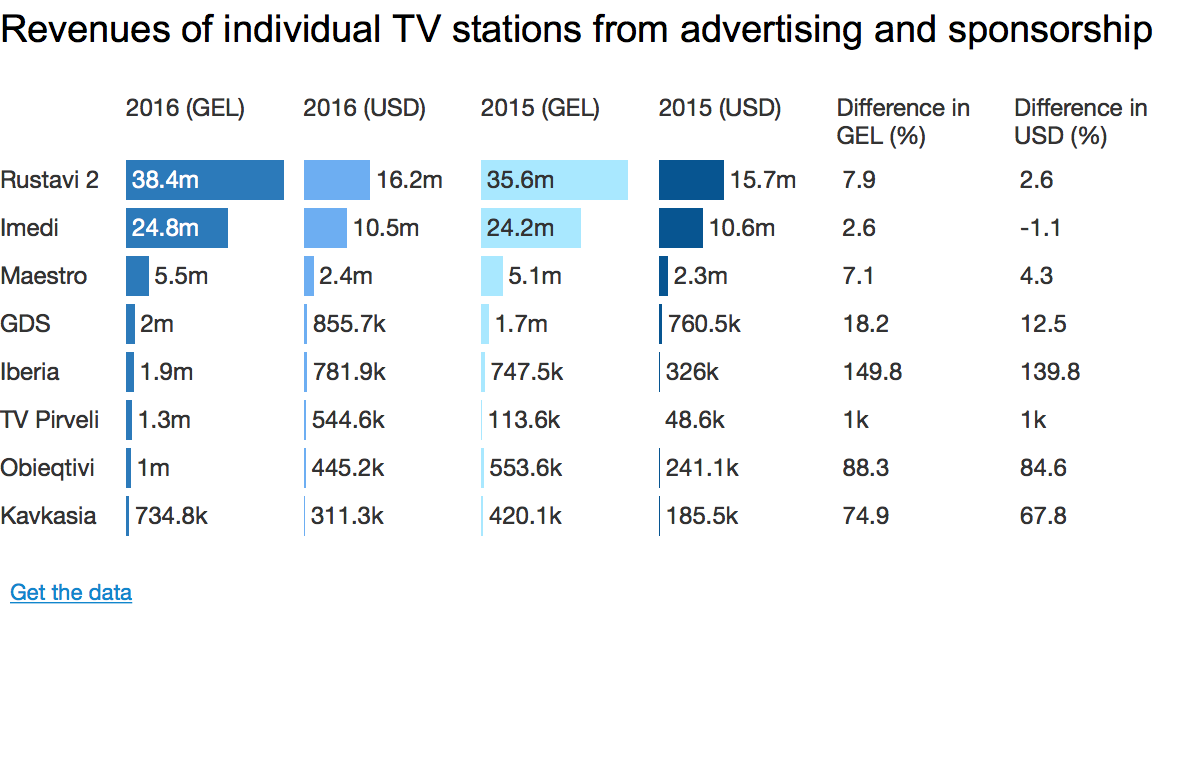 Unlike Rustavi 2 and Imedi, the channels that started broadcasting in the past several years – for example, TV Pirveli, Iberia, and Obieqtivi – have significantly increased their revenues from advertising.

According to the Public Registry data, TV Pirveli is owned by Ketevan Japaridze, the spouse of Vakhtang Tsereteli who is a son of businessman Avtandil Tsereteli. In 2015, the TV station’s revenues were above average, while in 2016 they increased tenfold.

According to the TV station’s representative, one of the reasons for the sharp increase in the channel’s advertising revenue was the channel’s decision to focus on the development of its sales service. The channel’s clients are average-sized and small companies, and it is planning to attract large international companies this year. It is also noteworthy that TV Pirveli ranks first among the eight largest TV stations by the highest share of revenues from political advertising (26.7%).

As part of the study, representatives of TI Georgia also interviewed the executive director of the Obieqtivi TV station who stated that the channel is not trying to attract commercial sales at all and that its revenue comes from political advertising.

Obieqtivi really stands out in terms of political advertising – in 2016, the TV station’s advertising revenue amounted to about GEL 1 million in total, of which the share of political advertising was 23.03%. It is noteworthy that the largest advertiser on Obieqtivi is the political party Patriots’ Alliance. The channel is closely connected with this party, which is also confirmed by the fact that the founder of the channel is Irma Inashvili, the leader of the Patriots’ Alliance and Vice-Speaker of the Parliament.

Iberia TV renewed broadcasting several years ago. It was owned by businessman Zaza Okuashvili and his wife, Nato Chkheidze. After the 2016 parliamentary elections, Nato Chkheidze became an MP on the party list of the Patriots’ Alliance, while Zaza Okuashvili became a member of the Supreme Council of the Autonomous Republic of Adjara. After being elected to the legislative bodies, they transferred their stakes to their children. The family also owns Omega Group, which brings together large cigarette and motor vehicle distribution companies. In 2016, the TV station’s advertising revenue increased almost by 150% compared with the previous year. Despite the fact that both owners of the TV station are persons with political interests, the share of political advertising on the channel only amounts to 5%. 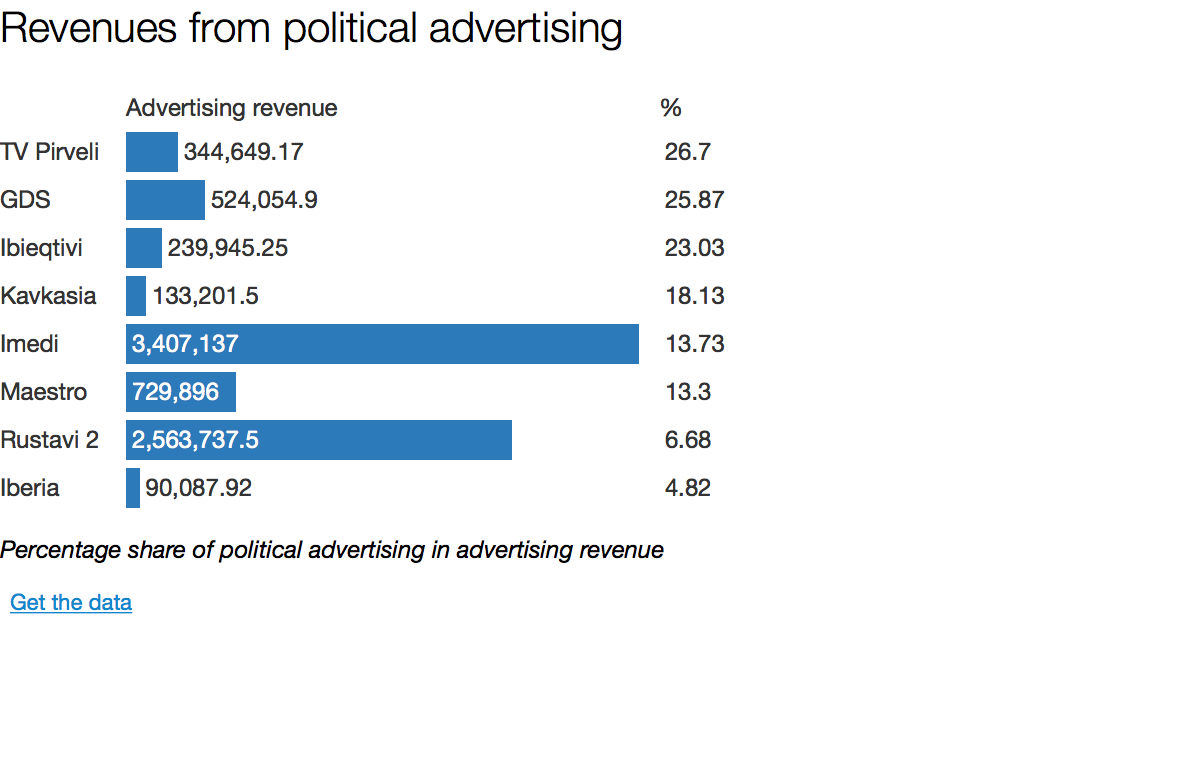 The criteria by which parties prioritize TV stations for pre-election political advertising are also worth exploring. In some cases, it is clear that the said behavior is not linked to the channel’s rating. For instance, according to the overall election campaign declarations posted on the website of the State Audit Office, the United National Movement didn’t place any paid political advertisements on Imedi TV, while the Georgian Dream behaved in the same manner with regard to Rustavi 2.

The Public Broadcaster received a revenue of GEL 1.7 million from advertising and sponsorship during 2016, which exceeds the previous year’s revenues by about GEL 1 million though is much less than those of commercial channels. Most of the revenues were received in the period from July to September, when the channel was broadcasting important international sports events. Increasing the advertising time for the Public Broadcaster can be one the issues to be included in the amendments to the Law on Broadcasting.

Since January 2017, Inter Media LLC has been selling the entire advertising time of Rustavi 2, Marao, Comedy Channel, Imedi, Maestro and GDS and a part of the time of TV Pirveli and Kavkasia. The sales house only sells advertising and sponsorship time, while the channels manage product placements as well as a number of programs which they believe they will sell better through their resources. It should be noted that these channels use the services of different rating measurement companies. Inter Media sells their advertising resources on the basis of the ratings measured by the respective companies. The existence of two measurement companies remains one of the main hindering factors on Georgia’s advertising market.

Although the director of Inter Media doesn’t see risks in the existence of a unified sales house, representatives of some TV stations noted that they didn’t see any qualitative difference between General Media and Inter Media. Considering the situation that existed on the market in the past, it is clear that the existence of a unified sales house makes the advertising market vulnerable to control by the authorities, which, in its turn, makes it possible to control the media. The unification of Imedi, Maestro and GDS under one holding is one of the signs of decreasing pluralism on the television media market. In this situation, the outcome of the dispute related to Rustavi 2 assumes a decisive importance. This is going to largely determine the fate of the unified sales house, as well as whether a recurrence of the situation that existed on the advertising market before 2012 is possible.

Inter Media has concluded one-year-long contracts with TV stations. It is unclear how sustainable this model of the market will turn out to be. Representatives of some TV stations think the model might not last long, one of the reasons being that the companies united under the sales house represent two opposing sides of a politically polarized media environment. In this regard, again, the outcome of the dispute related to Rustavi 2 is important. 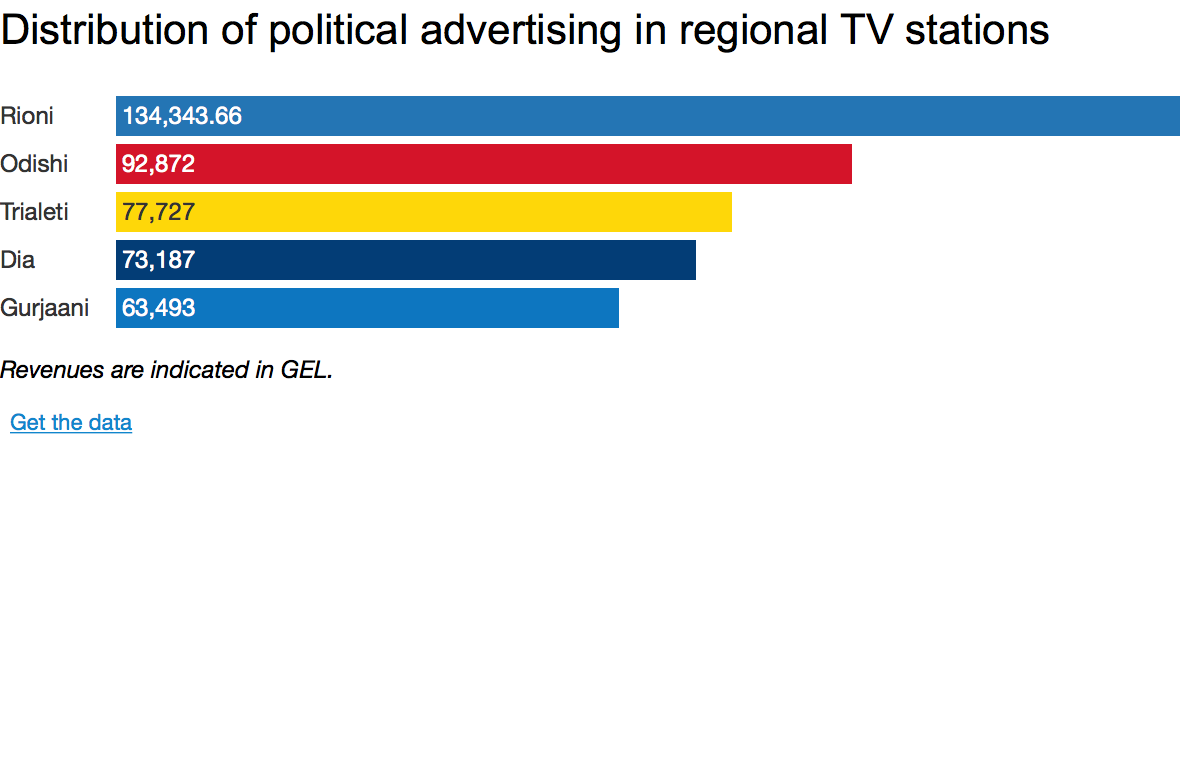 Despite the fact that the year 2016 was a little more profitable for the regional media, regional media outlets still face the financial, technical and HR-related challenges that have hindered their development for years. These challenges include problems with audience measuring companies, lack of technical order, disorganized operation of sales houses, etc. It is noteworthy that fundamental changes are less likely to take place in the regional media until these problems are resolved.

The developments that took place on the advertising market in 2016 offer little hope that the situation will improve significantly in the next year. 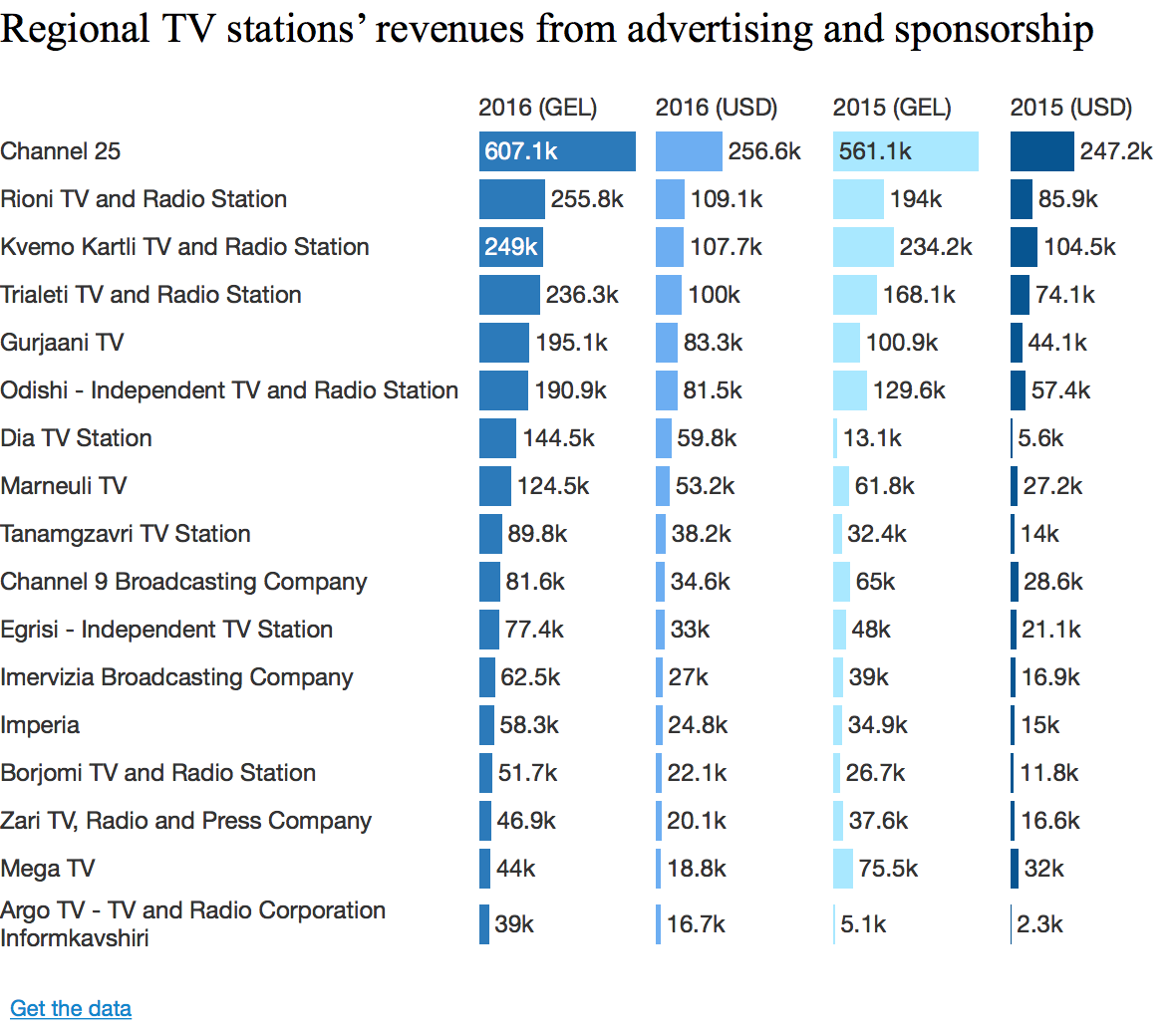 Forecasts for the future

The years 2015-2016 have demonstrated that the Georgian media advertising market lacks sustainability. It is influenced both by the country’s internal economic situation and the economic processes underway in the global and regional economy. The advertising market turned out to be quite sensitive to advertising regulations which changed the duration of commercials and, also, increased the interval between commercial breaks. The representatives of TV stations also stated that the new rules of sponsorship and product placement are not flexible and clear, which ultimately hinders their effective operation.

In 2017-2018, local government and presidential elections are due to be held in Georgia, which gives TV stations opportunities to receive additional revenue, although this cannot resolve the problems which representatives of the TV stations have talked about.

In view of the risks that accompany the unified sales house, the following questions arise: How stable and useful is this arrangement going to be in the long run? Is the new company in a monopolist’s position and will it use its privileged position in good faith in terms of advertising prices? Therefore, it is unclear whether the new sales house will be able to exert a considerable positive influence on the volume and competitiveness of the market.