It is common for cell phone users in Georgia to receive advertising SMS messages several times a day. In most cases, these messages are sent by companies offering various products and services without consent from the receiver. Messages sent through mail, telephone, E-mail or other means of telecommunication related to any type of goods, product, service, and employment or temporary job offer are considered to be examples of direct marketing that are regulated by the Law on Personal Data Protection. The law requires companies to set up accessible and adequate means for users to opt out from direct marketing. Even though this regulation was enacted into law in Georgia in September 2014, the problem still remains. For example, employees of Transparency International Georgia continue to receive advertising SMS messages that do not offer an unsubscribe option or where the opt-out mechanism is dysfunctional.

The Caucasus Research Resource Centers (CRRC) conducted a nationwide public opinion survey for Transparency International Georgia between April 28 and May 6, 2015. According to the results the number of respondents who receive advertising SMS messages without their consent has increased by 11% since  2013 and currently stands at 78%.

Additionally, fewer people think that these messages are useful or interesting. The number of respondents who are annoyed by SMS advertising has increased by 14% since 2013 and currently stands at 35%. 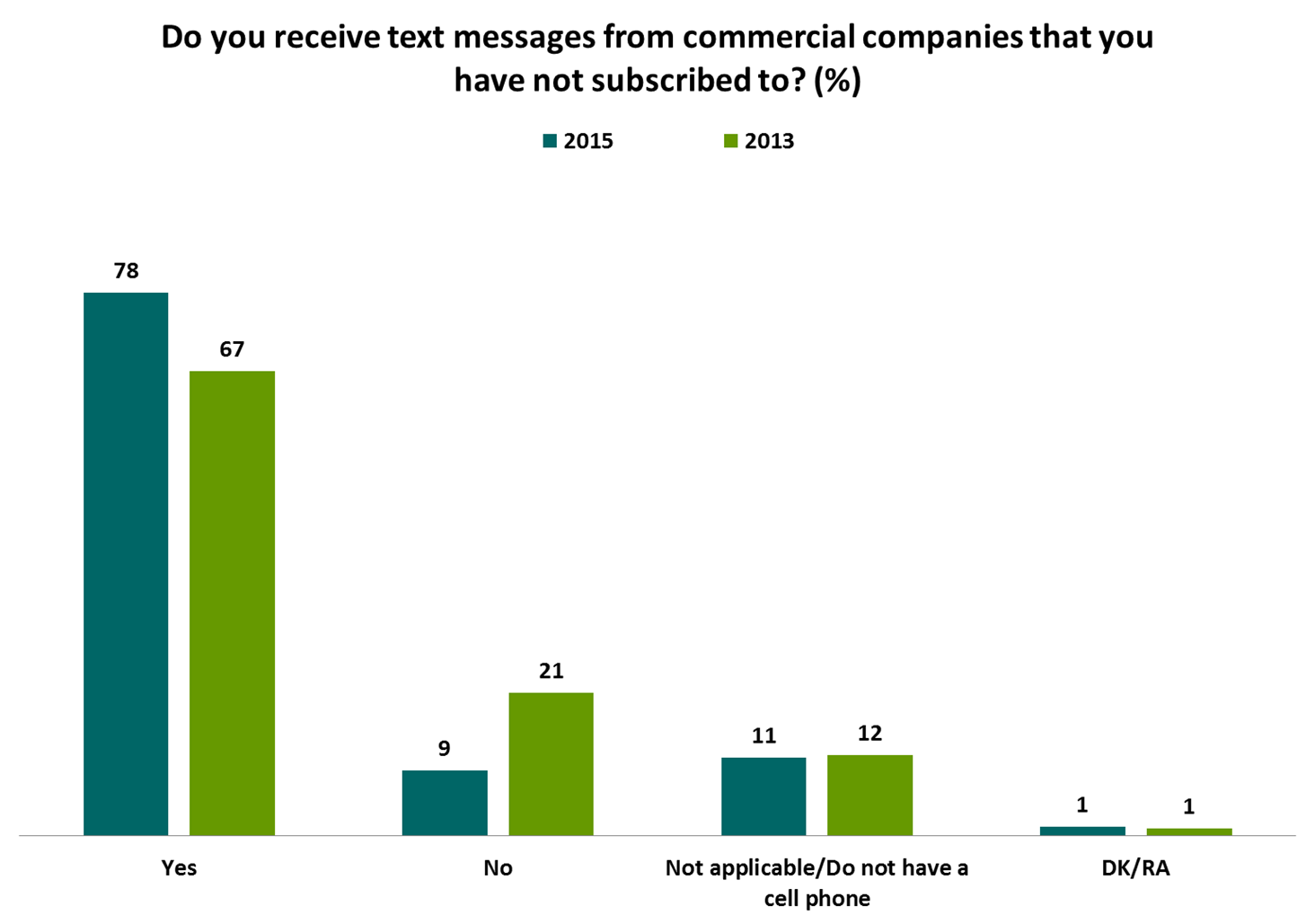 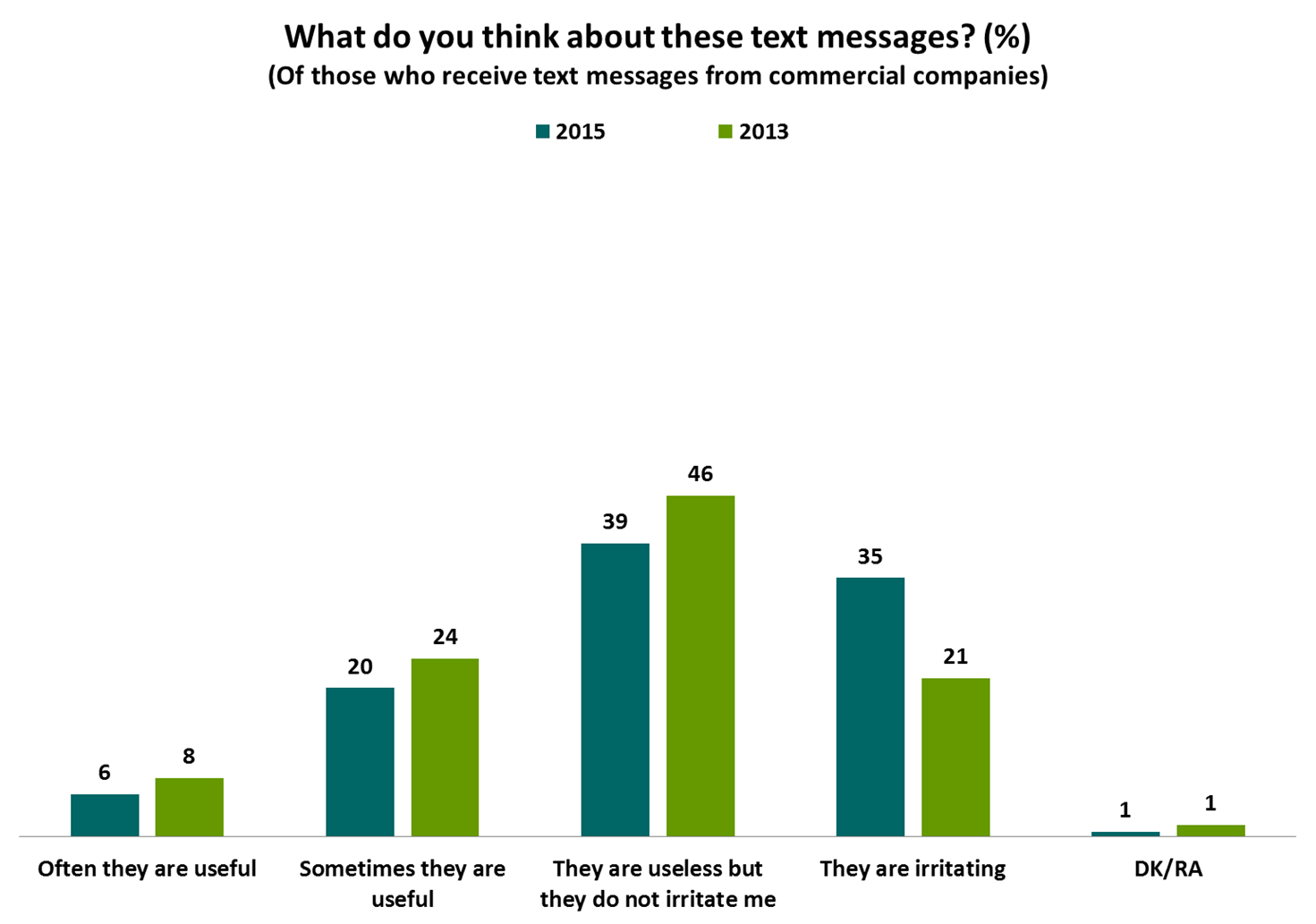 Citizens who believe that they are denied the opportunity to unsubscribe from  advertising messages or have continued receiving such messages past the 10 day grace period after unsubscribing  can contact the Office of the Personal Data Protection Inspector. The inspector’s website contains detailed information about direct advertising regulations for citizens. The responsibility for direct advertising lies with the company in whose name the advertising was conducted. In case of a violation the inspector is authorized to fine companies GEL 3,000. The fine is increased to GEL 10,000 if the violation is repeated within a period of 1 year.

According to the information provided to us by the Office of the Personal Data Protection Inspector, the inspector has received a total of 18 complaints since 2013. Based on these complaints the inspector has examined 13 companies and fined 4 of them for GEL 3,000. The number of complaints has increased every year. Four additional companies have been examined with the inspector’s own initiative, while 3 others are currently being studied.  Several violations have been revealed as a result. Since 2013, a total of 25 different organizations have consulted with the Office of the Personal Data Protection Inspector on direct marketing.

A few days ago, Magticom (one of Georgia’s largest mobile operators) users received a message notifying them about a change in their contract terms. According to the change, users were now giving their consent to receiving advertising SMS messages from Magticom’s partner organizations. The case is currently being studied by the Personal Data Protection Inspector. Despite the fact that Magticom did offer an opt out option to its users, we believe that the company should send advertising SMS messages only to those users who have previously subscribed to receiving such messages. This will ensure that users who do not wish to receive advertising SMS messages do not have to keep opting out of updates from each company separately.