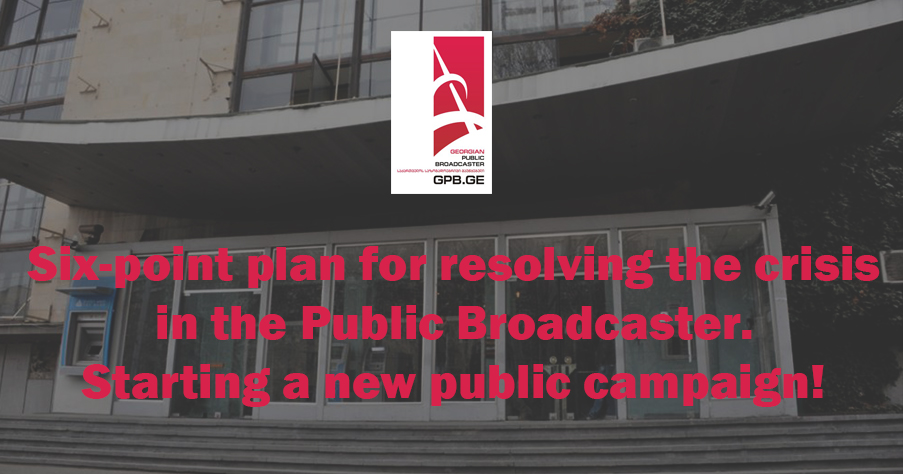 We, organizations signatory to this statement, are extremely concerned about the deep institutional crisis  the Georgian Public Broadcaster is in. Public trust towards the broadcaster is critically low, while it keeps receiving increasing funding from the state budget. Unfortunately, the Public Broadcaster fails to serve the interests of the public, is unable to fulfill its legal role; and acts instead as a media organization that is in service of political party interests.

Considering the importance of the role and function of a public broadcaster in a democratic society, we are launching a movement for reforming the Public Broadcaster and propose a 6-point plan involving the following demands:

2. Members of the Board of Trustees and the General Director must be summoned to the Parliament – We would like to once again call upon the Parliament of Georgia to look into the activities of the Public Broadcaster and organize a public hearing to examine the extent to which the broadcaster is fulfilling its legal obligations.

3. The Director of the Public Broadcaster Vasil Maghlaperidze must resign – The Georgian Public Broadcaster has made a number of inconsistent and questionable decisions under Vasil Maghlaperidze's leadership. These decisions were related to: a vague plan to reform the broadcaster; implementing a closed staffing policy, whereby journalists from the former Prime Minister's TV station were employed through uncompetitive procedures; suspicious tenders; failure to fulfill program priorities; assuming an editorial policy that was loyal towards the government; closing of the broadcaster’s European Office, etc. Vasil Maghlaperidze was also involved in the Public Broadcaster’s decision to air a video footage of a writer Zviad Ratiani that was taken out of context in a way that served the interests of the Ministry of Internal Affairs, which violated universally recognized ethical standards.

4. 2017 activities of the new management must be subjected to an extraordinary audit – An audit report published by the State Audit Office, which covers the period of 2015-2016, identified significant financial and managerial violations that match the assessments issued by the civil sector. Considering the questionable nature of decisions made by the new management of the Public Broadcaster in 2017, we believe that it is necessary to conduct an extraordinary audit of the broadcaster to examine its work over the past year.

5. The reform of the Georgian Public Broadcaster must , including a possible revision of the institutional formation of the Board of Trustees and amendment of norms regulating its activities – The existing norms regulating the Board of Trustees clearly do not meet the challenges faced by the Public Broadcaster. Therefore, for the purpose of establishing a more accountable Board that is free of political and economic influence, the Parliament must set up a working group with the involvement of civil society that will develop a better model for setting quotas and selecting members of the Board of Trustees.

6. The Parliament must not overrule the President's veto on the amendments to the Law on Public Broadcasting – Amendments initiated by the Public Broadcaster reduce its openness and transparency, increase the risk of corruption and significantly damage the advertising market. Therefore, the Parliament must not overrule the veto and needs to work with the civil sector and other stakeholders on legal amendments that are actually needed to reform the broadcaster.