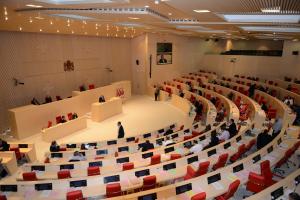 On May 4, the Parliament held a first reading and gave an approval to amendments to regulations governing the procedure of proposing legislative bills. The initiative entails adopting new procedures and rules for proposing bills to the Parliament which will differ from the existing practice.

A Legislative Proposal is a properly drafted request from a person/entity without legislative powers presented to the Parliament including a justified request to adopt, amend or repeal a law. According to the current law and practice, the right to propose a bill is an important way the public can engage and participate in the legislative process.

The 2012-2016 Parliament’s activities were marked with progress when it started publishing proposed bills on its website. A recommendation on this issue will also be provided in the Report on Assessment of the Parliament’s Performance by Transparency International – Georgia. The Open Parliament Action Plan 2015-2016 provided for publishing legislative proposals on the Parliament’s website as well as introducing functionality to make legislative proposals electronically. The same obligation is included in the draft Open Parliament Action Plan 2017-2018.

The 2016-2020 Parliament approved, after first reading, amendments that create unjustifiable barriers for citizens who would like propose a bill.

According to Article 150 of the Regulation of the Parliament of Georgia, a legislative proposal may be introduced by Georgian citizens; state entities (except for the executive branch of the government and legal entities under public law); bodies of local municipality; political and civic unions and other legal entities.

According to section 3 of the same Article of the Regulation, a proposal may be made in a form of:

The sponsor is required to include his/her argumentation, signature and address.

The existing practice shows that the committee invites the sponsors and hears them. This is a step ahead.

The initiative entails changes in several ways. It will define the procedure for proposing a bill. It will also change the deadlines for proposing and debating bills. The Bureau of the Parliament will send a proposal to the Leading Committee (if needed – also to other committees) which will debate the proposal within 30 days instead of existing 20-day deadline. If the debate cannot be held, it will be possible to delay the debate up to 30 days instead of existing 10 days.

The proposed amendments create barriers to free exercise of the right of legislative proposals that are non-existent in the current practice. Namely:

Drawbacks of the Amendments

The initiators of these amendments give the following reasoning in the explanatory note of the amendments: “to regulate issues arising from the procedure of proposing and deliberating legislative bills in the Parliament.” It is unclear what objective facts raised this discussion on flaws and problems of the practice.

The objective of legislative proposals is to ensure public engagement, specifically allowing them to participate in the legislative process and to propose their ideas and opinions. Contrary to this, it is impermissible to create qualification and competence requirements as barriers for citizens to exercise this right. More so, the practice shows that even the entities and persons fully authorized to initiate bills demonstrate lack of justification of the reasons and essence of bills.

These regulations create fewer problems for NGOs working on legislative proposals but may create additional barriers for individuals.

Additionally, a committee chairperson may decide that the reasoning of the sponsor of a bill does not comply with the requirements and thus the bill needs to be deemed incomplete. This issue instead can be considered when the bill is debated and a more reasoned decision – can be made.

It is important to keep the existing practice and that the sponsor of a bill had the possibility to propose a bill to a hearing of a committee, participate in the debate and answer questions. The amendments propose rules different from the practice: not only the person proposing a bill will lose the opportunity to present the proposal but he may not even be invited to the hearing on the bill.

Although the provisions of the Regulation of the Parliament require improvement, we should still avoid adopting rules that, based on formal grounds, substantially impacts an individual’s ability to exercise his or her right and changes the standard of public engagement.

We believe that these proposed amendments restrict public engagement in the activities of the legislature and worsens the existing practice.

The following are our recommendations on the procedure of legislative proposals:

No artificial barriers should be created regarding the format of legislative procedures (for example, justifying the reasons and essence of proposals) as this will both prevent citizens from exercising the right and make it possible to reject proposals based on subjective grounds.

[1] The highest number of legislative proposals from a citizen have been made by Zurab Vanishvili (6 bills) and a legal entity – “Union of Civic-political Organization In the Name of the Lord – the Lord is Our Truth” (4 bills). Out of 64 proposals: • 4 positive reports have been approved; • 14 negative reports have been approved; • In one case, two legislative proposals were initiated (a proposal of the Ombudsman); • In 3 cases, the sponsors withdrew their proposals; • In one case, a working group was formed; • No decision was made regarding 41 proposals. For example, on 16 December 2015, the Parliament of Georgia approved amendments regarding restrictions on registration of child marriages. The bill had been developed based on a proposal of the Ombudsman of Georgia. Transparency International – Georgia has been a sponsor of multiple legislative proposals to the Parliament.