Transparency International Georgia conducted a nationally representative survey between March 16th and 28th, 2016.  In total, 2032 respondents were interviewed. The fieldwork was carried out by the Caucasus Research Resource Centers (CRRC).

The most important healthcare related findings include:

1.1 The share of the public [1] which is ready to take on the financial responsibility for their own health insurance together with the government increased by 10 percentage points in 2016 compared with 2015. In total, 56%[2] of the public is willing to take financial responsibility together with the government for their healthcare, which is the equivalent of at least 1.7 million people. For further details, please see the chart below.

Chart 1.  Ability and willingness to pay for a desired health care package 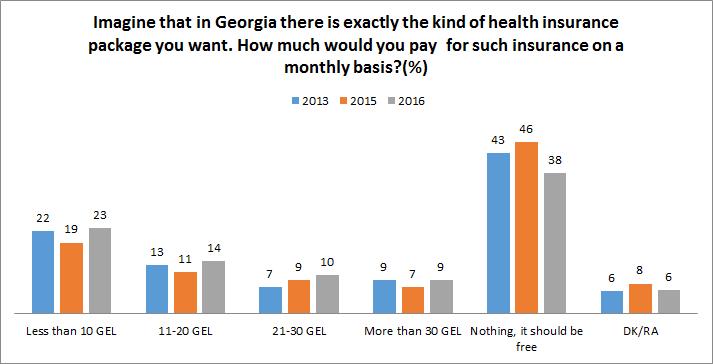 1.2. Sixty-one percent of the population believe that individuals who have an above average income should pay more for health insurance, and their payments should partially finance the health insurance of those who have low incomes. This is a five percentage point increase compared with 2015. Of those surveyed, 18% believe that every person should take care of their own health, and regardless of income should cover their own healthcare costs. For further details, please see the chart below.

Chart 2. Who should take financial responsibility for health insurance? 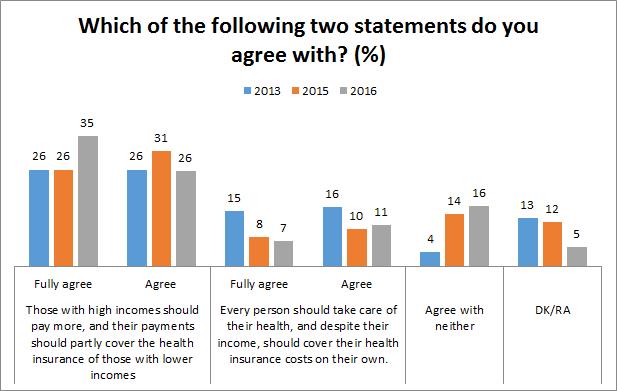 Chart 3. Who should pay for healthcare expenses – citizens or the government? 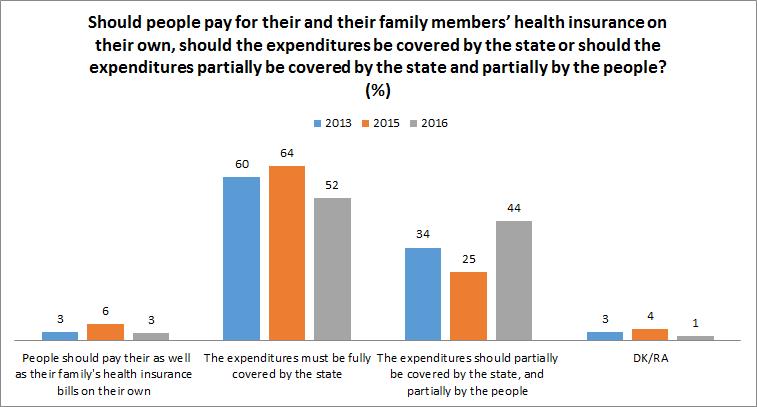 2.1. Significantly, 41% of the public could not see a doctor, because the consultation was too expensive; 59% of the public did not experience this problem. For further details, please see the chart below.

Chart 4. Situations when individuals were sick, but could not afford to see a doctor due to the co-pay 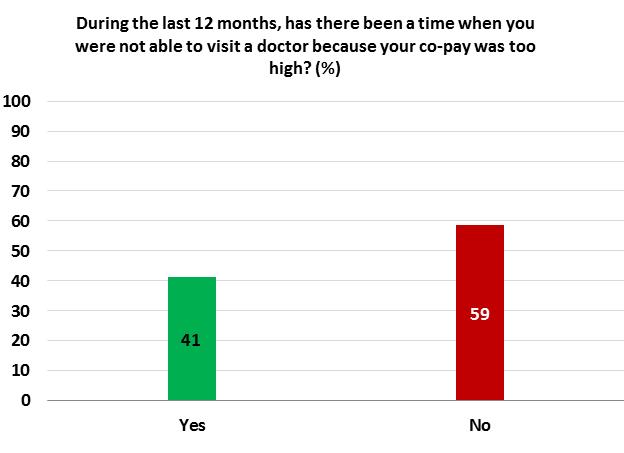 2.2. The survey shows that a large share of universal healthcare beneficiaries did not change their service provider. Beneficiaries are allowed to do so once every two months without explanation.[3] For further details, please see the chart below. 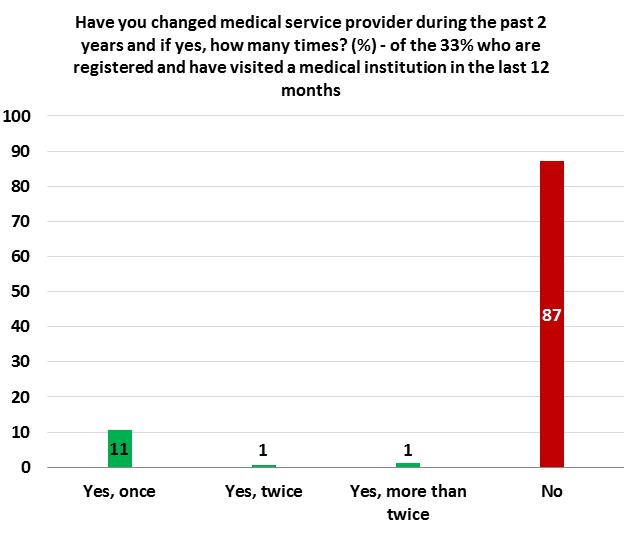 2.3. Of the universal healthcare program beneficiaries who changed their medical service provider, 37% did so because of the distance to the provider, 15% because of the poor qualifications of the doctor at the previous institution, 13% because of the reliability of medical tests,[4] and 3% because of sanitary conditions. For further details, please see the chart below. 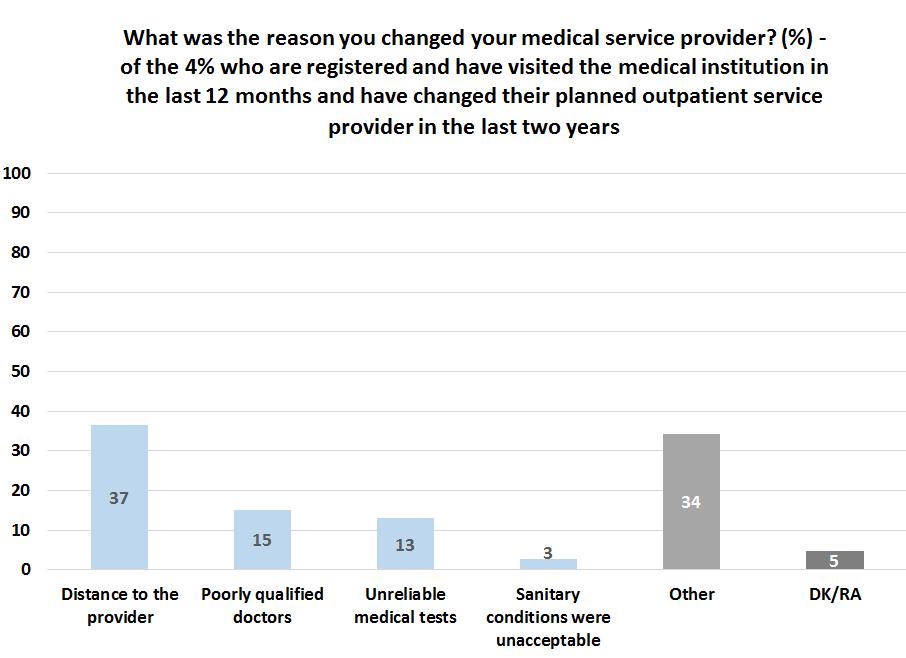 2.4. The survey shows that self-medicating remains a serious problem. During the past 12 months, 25% of the public took either antibiotics or anti-depressants without a doctor’s prescription; 74% had not. On the one hand, this data indicates that hundreds of thousands of people self-medicate. On the other hand, this suggests that 25% of the public is still able to bypass the prescription system to acquire medication.  For further details, please see the chart below. 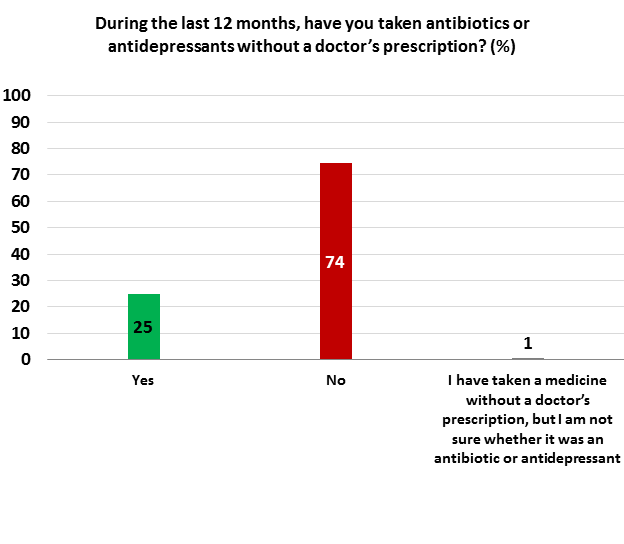 [1] We weighted the survey data, which allows us to generalize our findings to the population covered by the survey. People under the age of 18 and people within specific geographical areas did not participate in the survey. The sample is representative of the Georgian speaking population which at the time of the 2013 presidential elections was 18-85+ years old and within specific geographical areas. Hence, the survey is representative of the attitudes of 3,185,586 people. Individuals outside the geographic areas covered by the research and individuals under the age of 18 were not interviewed. We selected 2032 respondents out of the population of 3,185,586 people to achieve a demographically and geographically representative sample. The average margin of error is 3.2%.

[4] This is an indicator of patient trust in the tests, which clearly cannot be used as the only assessment criterion of medical testing.