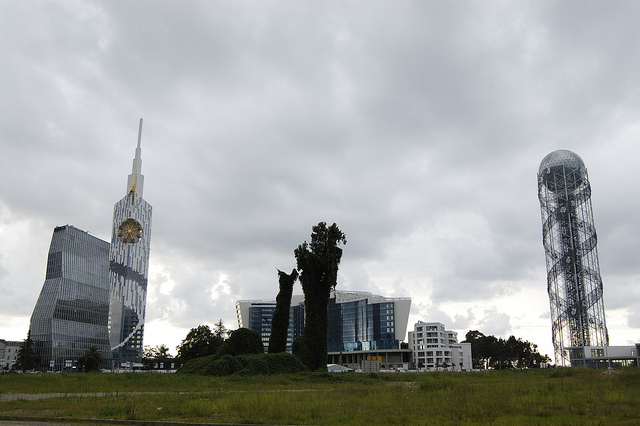 Transparency International Georgia continues to look into the business interests of local government officials. In March 2015, we published the outcomes of the study dealing with the entrepreneurial activities of Batumi City Council deputies and their family members.

This time, we are providing information on the persons appointed to high positions in the City Hall following the 2014 local elections.

The study showed that:

Below we bring information about the City Hall officials, who, according to the Registry data, are in charge of different companies and hold shares in companies:

The Vice Mayor is the 100% owner of  Elit-Flora (ID # 445391692) and is currently its director. This is a violation of Article 13, paragraph 4 of the Law of Georgia on the Conflict of Interests and Corruption in Civil Service. The company was registered in December 1, 2010. The company has never taken part in any state electronic tenders, nor have the administrative authorities ever signed any direct purchase contracts with it. The company's activities, according to the Registry data, extend to agriculture, nursery, and floriculture.

Manvelidze’s official declaration does not include the information about the above entrepreneurial activities – a violation of Article 15, subparagraph “i” of the Law of Georgia on the Conflict of Interests and Corruption in Civil Service. Consequently, it is also unclear whether this senior official of the City Hall received any income from the above activities at all.

According to the Registry data, Zurab Beridze voluntarily gave up his position as the director of Adjara ElitAudit Ltd (ID # 445403224) on August 27, 2014, following the local self-government elections. He also handed his 50% shares with management rights over to Dimitry Tevdoradze pursuant to the law. In his asset declaration filed on October 6, 2014, Zurab Beridze indicates that he has received GEL 104, 748 from the company as result of being its director and 50% shareholder.

On November 14 , 2014, the Public Broadcaster’s Adjara Television and Radio management signed a direct procurement agreement with Adjara ElitAudit Ltd. The company carried out the broadcaster’s audit and received GEL 2,500 in exchange.

On August 7, 2014, Zurab Beridze left the position of the director of another Batumi Business Group for personal reasons, however, he continues to own 25% of the Batumi Business Group (ID #445426833). He did not indicate this in his official declaration. The non-declaration is a violation of Article 15, subparagraph “i” of the Law of Georgia on the Conflict of Interests and Corruption in Civil Service. It remains unclear how much income Mr. Beridze received from holding the above position and shares.

The Deputy Mayor of Batumi has not included in his asset declaration (ID # 445416452) the information about owning 50% of   BT COMPANY, Business and Civil Disputes permanent Arbitration either. Zurab Beridze remained director until August 2014. His asset declaration does not contain any income received from this position.

Aleksandre Mitaishvili, another Deputy Mayor of Batumi, is not involved in the management of any company, nor owns any shares. In his asset declaration filed on September 30, 2014, he indicates that his father, Gabriel Mitaishvili is a shareholder in Infolt Batumi (ID # 245435907) and Infolt Georgia (ID # 245576602) and received over GEL 5,000 of income from both activities in 2013. The deputy mayor, however, does not indicate in his asset declaration that his father is director and 50% shareholder of one more company, Altei Ltd (ID # 445389115). This company was registered on September 17, 2010. It operates in the fields of opening catering facilities, arranging storage facilities and food production, sale and distribution.

Sophio Mikeladze,  Head of the Health and Social Protection Service in Batumi City Hall, filed her official asset declaration on September 26, 2014. The declaration does not specify that her husband, Revaz Verdzadze owns 25% shares in Khelmarjve Ostati Ltd (ID # 445387590) registered on July 8, 2010. According to the Registry data, the company’s major field of operation is water and sewer rehabilitation works. Revaz Verdzadze also served as chief specialist in the Batumi City Hall’s Boni-Gorodok territorial agency in 2013.

TI Georgia’s representative contact the Batumi Mayor’s office about the lack of declarations for heads of non-commercial and commercial entities with GEL 100,000 turnover or more, wholly owned by the local government, as required by Georgian Government Decree of February 12, 2014. TI Georgia representatives were told at the Batumi Mayor's office that the pertinent asset declarations of the officials will be filed in the nearest future, after which the organization will be able to conduct a research on a much wider scale.

We call upon the Civil Service Bureau and the Mayor of Batumi to require the relevant officials to make adjustments to their asset declarations concerning the violations identified through our study.

We also urge the Batumi City Hall to ensure timely filing of asset declarations by the heads of non-commercial and commercial entities that are owned by and subordinate to the City hall and that fall under the Georgian Government Decree of February 12, 2014.