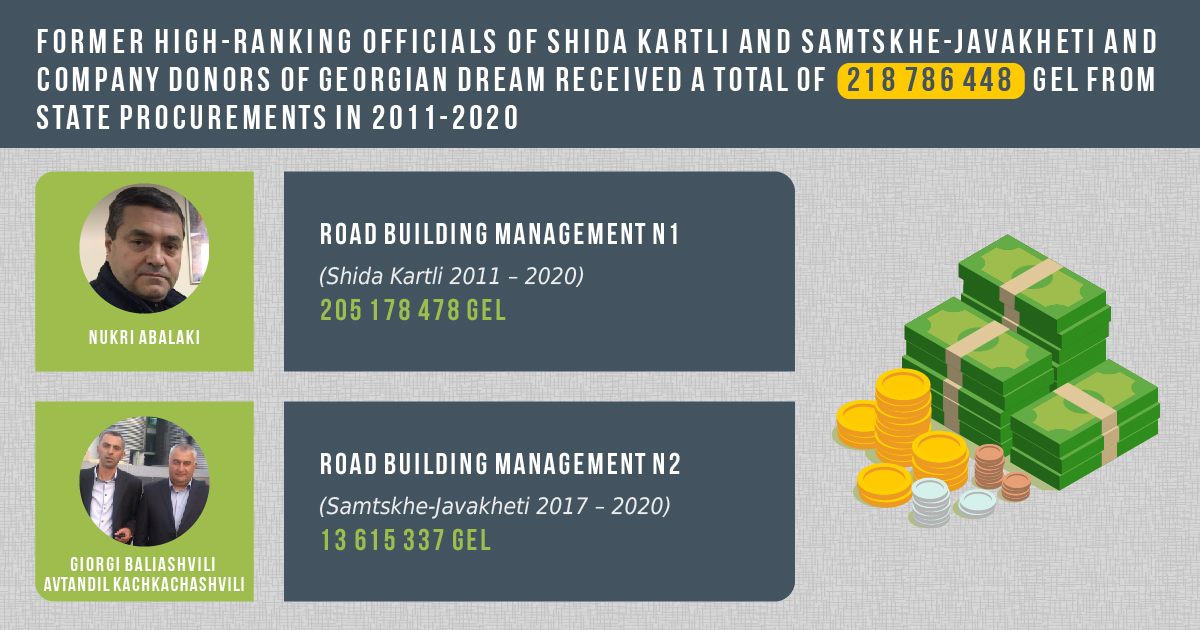 In 2015, the owners of this company, along with the former deputy Governor of Samtskhe-Javakheti Avtandil Kachkachashvili, and his friend and former director of Akhaltsikhe Municipality’s LLC Ketilmotskoba Giorgi Baliashvili, founded Road Building Management N2. The company operates mostly in Samtskhe-Javakheti. From the beginning of 2017 until September 2020, this company received 13 607 970 GEL from state tenders.

Nugzar and Nukri Abalaki are major donors of the Georgian Dream. Both of them donated 60000 GEL to the ruling party in August and October 2016, respectively. The third shareholder of the company, Shota Abuladze, donated 60000 GEL to the United National Movement prior to the parliamentary elections in 2012. The company also donated money directly to the former ruling party. In 2011, the Road Building Management N1 donated 100 000 GEL to the United National Movement.

Businessman Shota Abuladze is considered to have a close connection with the United National Movement. His son, Giorgi Abuladze, served for years under the previous government as the Head of the Regional Development Department of the Ministry of Regional Development and Infrastructure. Moreover, his son in law, Giorgi Kvitsinadze, served as Deputy Governor in Shida Kartli. According to Gori Community Radio “Mosaic” and the Information Centre of Shida Kartli, Shota Abuladze is a friend and a family relative of Ioseb Makrakhidze, who is a Georgian Dream majoritarian candidate for Gori.

Nugzar and Nukri Abalaki are long-time business partners of Shota Abuladze. They are currently running four businesses. These are the companies:

From 2011 till today, the company won 139 out of 267 tenders. Out of these, the company was the sole bidder in 64 cases. Moreover, there were 27 tenders where the company that offered a lower bid than Road Building Management N1 was disqualified. Therefore, the company received 43 495 702 GEL (22,2% of the total money received through tenders) in uncompetitive tenders. Moreover, the company received 49 812 910 GEL from tenders where their competitors were disqualified. It should be noted that more than two companies participated in some of the tender competitions, however disqualification was issued only to those companies that bids lower than those of Road Building Management N1.

Municipality of Gori, the Road Department of Georgia and Municipal Development Fund of Georgia are the main procurers of the company’s services. However, the company is also winning tenders announced by the Municipalities of Kaspi, Adigeni and Akhaltsikhe, as well as by different state N(N)Les and LEPLs.

The following is data of the tenders won by LLC Road Building Management N1 from 2011 till August 2020: 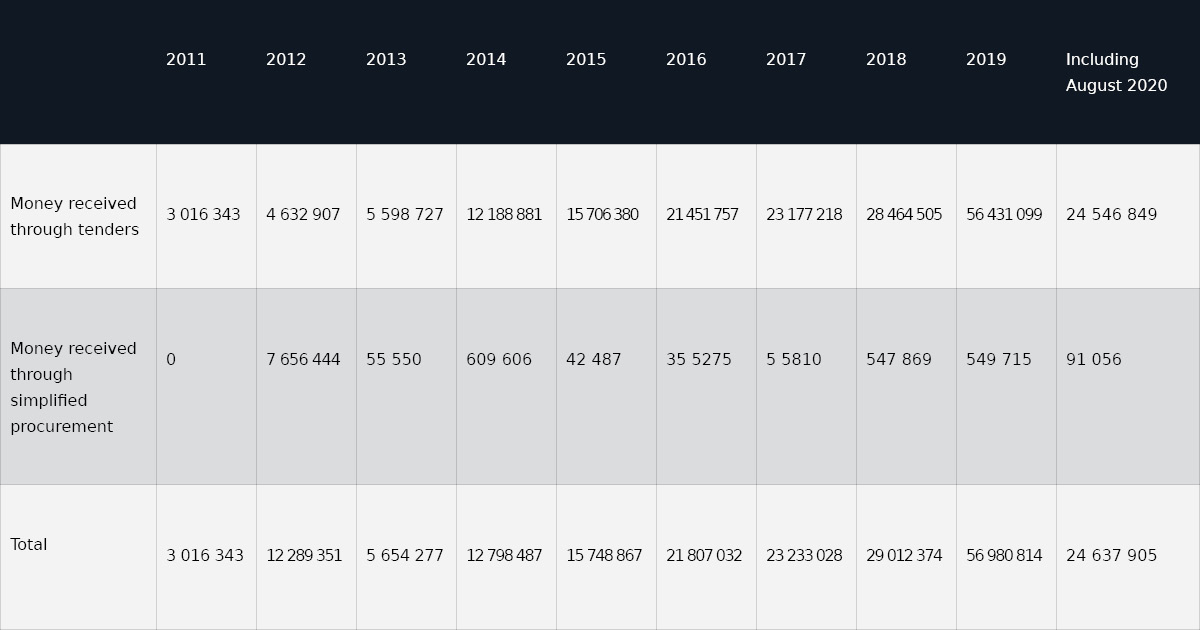 The Report of the State Audit Office published on November 22, 2019, states that 33 tenders were announced in 2017-2018 for the purpose of constructing, rehabilitating and maintaining roads in the Gori Municipality. LLC Road Building Management N1 secured 22 of those tenders, while the others were won by LLC Shara and LLC Ibolia, both of which are owned by the family of Ioseb Makrakhidze, Georgian Dream’s Majoritarian MP in Gori. Transparency International Georgia wrote about the business interests of Ioseb Makrakhidze’s family in September 2019. Out of these tenders, 21 were held without competition. As a result, LLC Ibolia received an income of 4 126 498 GEL, LLC Shara made 2 695 359 GEL, and LLC Road Building Management N1 – 12 712 254 GEL.

Similar trends are observed from 2019 till today. These three companies win most of the “big” tenders announced in these fields. LLC Road Building Management N1 secured 21 tenders in this field. In most cases, this company was the winner of the tender competition without competition, and in some cases LLC Shara was its competitor. LLC Shara was losing the tender competition because they made higher bids to the Gori Municipality City Hall. LLC Road Building Management N1 secured 14 387 449 GEL from the aforementioned tenders during this period, while LLC Ibolia received 3 073 444 GEL. It is in fact LLC Road Building Management N1 and the companies of the family of Ioseb Makrakhidze that divide amongst themselves expensive tenders related to the construction and rehabilitation of roads in Shida Kartli.

Avtandil Kachkachashvili and Giorgi Baliashvili became public officials in 2013 after the Government of Georgia transferred Akaki Machutadze from the position of Head of the Regional Department of the State Security Service in Samtskhe-Javakheti to the position of Governor of Samtskhe-Javakheti. Machutadze appointed Kachkachashvili as his deputy in 2014. Afterwards, Giorgi Baliashvili, who is a friend of the Governor, became the Head of the Municipal LLC “Ketilmotskoba”. Baliashvili and Kachkachashvili left their positions at the same time in July 2015. They became business partners afterwards and have been actively participating in state tender competitions.

Prior to his appointment as the Governor, Avtandil Kachkachashvili was the head of Georgian Dream’s headquarters in Adigeni.

Giorgi Baliashvili’s name is connected to several widely known cases. In 2015, he was accused of assault by a former inmate. Moreover, representatives of the National Movement exposed him of partaking in physical violence in 2016-2017. Giorgi Baliashvili, who is a friend of the Governor, has not been indicted for his connection to these incidents by the law enforcement.

Giorgi Baliashvili’s mother, Zoia Baliashvili, was elected as Georgian Dream’s Majoritarian MP in the Akhaltsikhe Sakrebulo during the local self-government elections in 2017. In March 2018, his sister’s husband, Koba Kurtanidze, was appointed as the director of Akhaltsikhe Municipality’s LLC “Ketilmotskoba”.

Road Building Management N2 participated in 95 tender competitions and won 47, including in 19 tenders (38.7%) without competition, from July 2017 until September 2020. Its main procurers are the municipalities of Samtskhe-Javakheti. The largest procurer was the Adigeni Municipality City Hall, which procured a total of 5.5 million GEL. 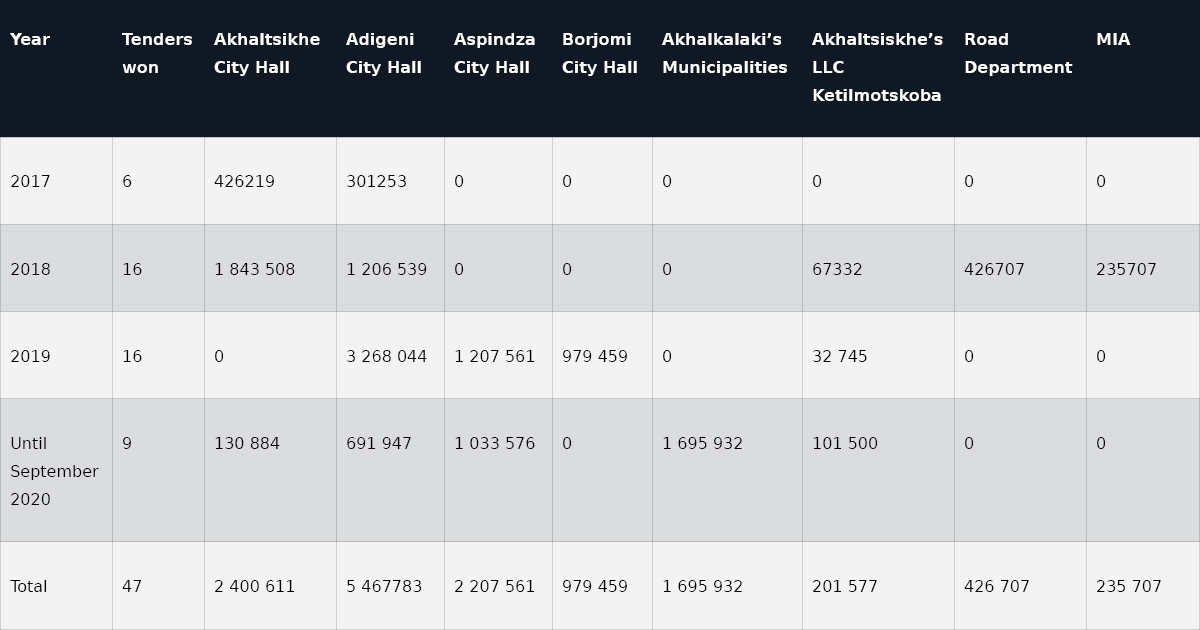 The Road Building Management N2 received 7367 GEL from 6 simplified procurements in the same period, including three procurements (a total of 4465 GEL) from Akhaltsikhe’s LLC “Ketilmotskoba”

During the past three years, the company signed state procurement contracts worth a total of 13 615 337 GEL.