The companies whose shares are owned by Georgian MP Viktor Japaridze and his son, Otar Japaridze, are winning tenders. The total value of the contracts they have been awarded since 2018 amounts to GEL 6,264,688.

Viktor Japaridze has been a Georgian MP for 16 years, he was elected as representative of the single-seat district of Mestia twice and was elected to the current Parliament from the party list of Georgian Dream – Democratic Georgia.

Viktor Japaridze owns 33.3 percent of shares of Seti+, LLC. He indicated this in his asset declaration submitted in December 2019. Seti+ has been participating in public procurement since July 2019. It has been awarded 10 contracts as a result of simplified procurement procedures. Their total value hsd amounted to GEL 57,762. 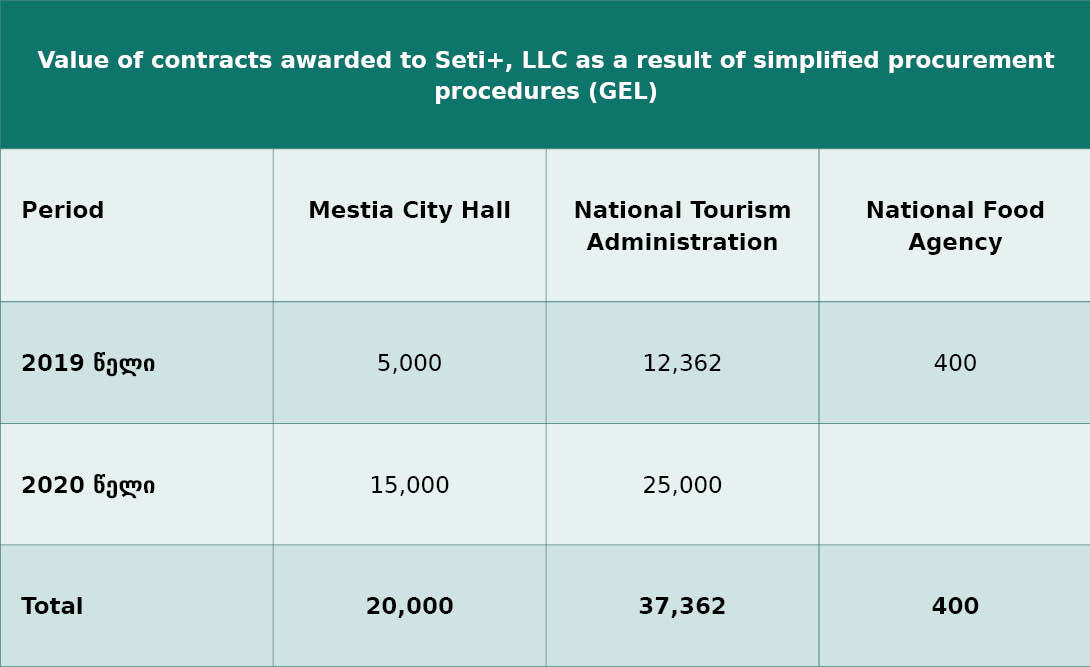 Expert House, LLC has participated in 14 tenders since 2017, winning six of them. The total value of its contracts amounted to GEL 2,571,006.

Otar Japaridze also owns 50 percent of shares in TOB Constructions, LLC. In 2018, the company participated in the total of two tenders, winning both of them without any competition (announcement numbers: GEO180000241, GEO180000181), in both cases the procuring agency was the State Construction Company, the total contract value amounted to GEL 3,635,920. Gravel and concrete were the subject of procurement. The tender documents show that, in case of both tenders, the State Construction Company requested that the supplier company’s plant be located within the maximum of 30 km radius from the village of Ipari of Mestia Municipality.

It is worth noting that precisely during this period the State Construction Company was conducting rehabilitation works on the 165-177 km section of the Zugdidi-Jvari-Mestia-Lasdili road. These works were conducted under the tender announced by the Roads Department of Georgia (announcement number: DAP170000180) which the State Construction Company won in December 2017.

Viktor Japaridze, his wife, Natia Khvistani, and Viktor Japaridze’s son, Otar Japaridze’s business partners are also large [political] contributors: since 2012, they have donated the total of GEL 360,000 to the ruling party Georgian Dream – Democratic Georgia, while in 2018, they donated GEL 50,000 to the presidential candidate, Salome Zurabishvili:

Viktor Japaridze has never mentioned his own and his wife’s political donations in his asset declarations. According to the Law on the Conflict of Interest and Corruption in Public Institutions, an official is under the obligation to indicate in his or her asset declaration a monetary expense exceeding GEL 5,000. The amount of donations made to parties by both Viktor Japaridze and his wife, Natia Khvistani, was considerably greater than GEL 5,000 in each case.

Transparency International Georgia calls on the Anti-Corruption Agency of the State Security Service and the General Prosecutor’s Office to investigate each tender won by the companies linked to Viktor Japaridze and his son, and to establish whether these tenders were announced in the conditions that favoured the companies in question and whether they possibly involved signs of corruption.

We also call on the Public Service Bureau to investigate Viktor Japaridze’s asset declaration and to respond accordingly.