The reconstruction of the government administration building cost a total of GEL 7,368,743 from 2013 until June 2015. All of the related services were purchased using the simplified procurement procedure, through negotiations with a single entity. A total of 142 contracts were signed in this way since 2013, with an overall contractual value of GEL 7,823,217. However, the actual reimbursement value was consequently set at GEL 7,368,743 by the LEPL Levan Samkharauli National Forensics Bureau. The government administration did not announce any tenders on procuring reconstruction services worth more than GEL 7 million, even though it would lower the price through competitive bidding.

Anagi Ltd was the recipient of the largest amount of government funds – GEL 2,336,768. Registered in 1995, Anagi Ltd. is fully owned by Nana Aroshidze, whose shares and managed by her husband Zaza Gogotishvili, member of the Supreme Council of the Autonomous Republic of Adjara and majoritarian Member of Parliament (MP) representing the city of Batumi in 2008-2012. In 2011, the company unsuccessfully participated in 6 tenders. In 2012, it won 3 out of 6 tenders it participated in. In 2013-2015, Anagi Ltd. participated in 12 tenders, but was unable to win any of them. The company did, however, manage to sign 4 simplified procurement contracts worth a total of GEL 923,000 with the Tbilisi Development Fund in 2015, as well as a contract worth GEL 4 million with the Municipal Development Fund in 2013. In 2011-2012, the company had signed a total of 37 simplified procurement contracts.

None of the companies mentioned above have been registered recently. Their owners are not among the list of financial donors to the ruling party. Only the current director of Anagi Ltd. Irakli Gogolashvili, its commercial trustee Davit Chantladze, and 100% owner Nana Aroshidze donated GEL 9,000, GEL 2,000, and Gel 60,000, respectively, to a non-commercial legal entity Georgia Is Not For Sale in 2012. However, these individuals have not made any donations ever since. 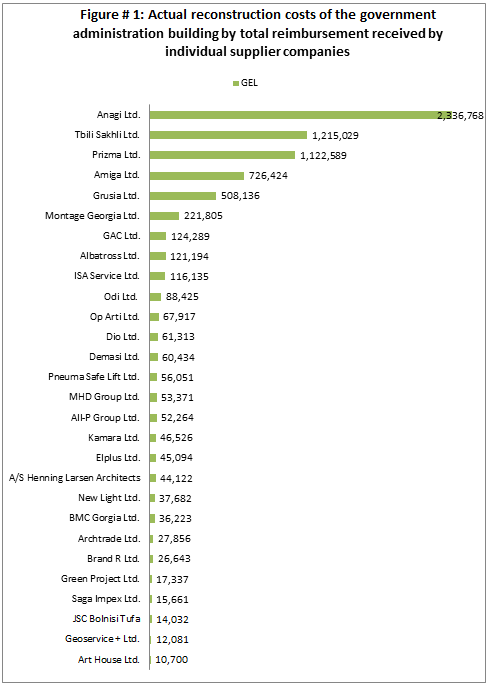 Out of the GEL 7 million spent on the reconstruction of the government administration building GEL 3,874,093 was spent on repair works, GEL 2,515,084 on construction and engineering works, GEL 189,111 on supply and installation of windows and doors, GEL 870,241 on installation of heating, ventilation and air conditioning systems, and GEL 108,393 was spent on architectural design. 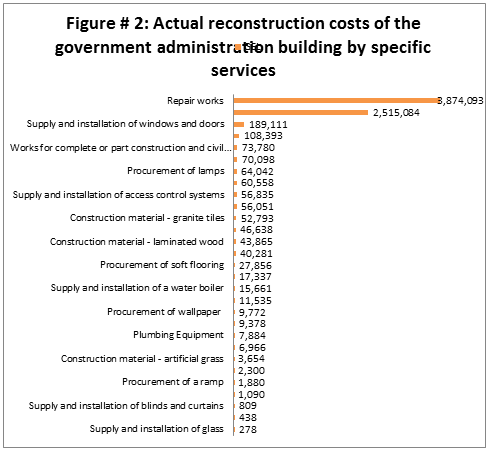