Developments around Georgian ports: what is new? - საერთაშორისო გამჭვირვალობა - საქართველო

In March 2020, the Poti Port Operator Company received a land-use permit for the first stage of the port expansion and began construction of a new dock, while the government has not yet begun searching for new investors to build the Anaklia Port.

Transparency International Georgia has been monitoring developments around the port of Anaklia in recent years and has published several publications on the subject. In June 2019, we wrote that perhaps one of the reasons for the suspension of the construction of the Anaklia port was the expected expansion of the Poti port, where persons related to the Georgian government operate. 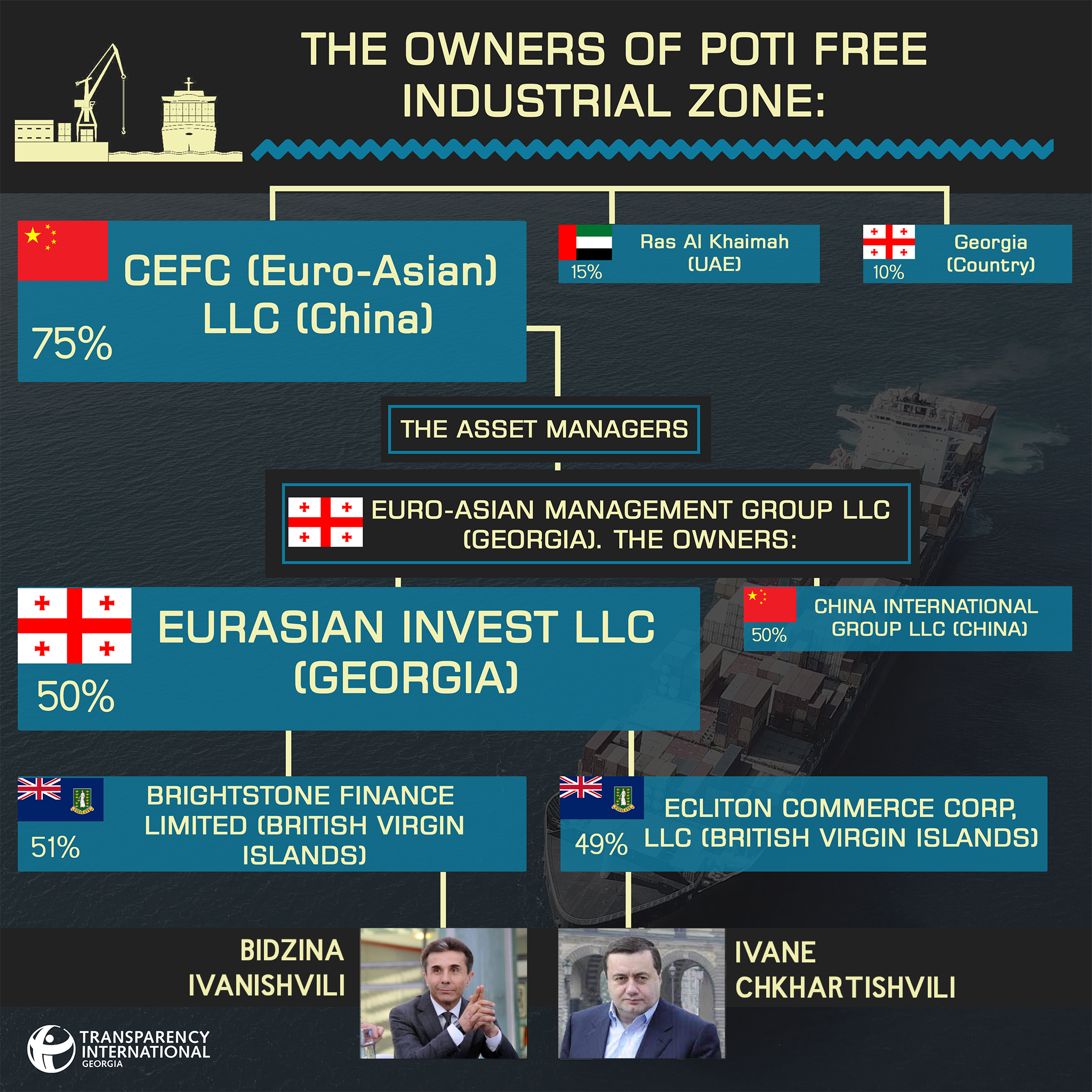 We have written before that the Poti Free Industrial Zone LLC is located near the Poti port, the successful operation of which is directly related to the cargo turnover at the Poti port. In 2017, CEFC China Energy became the owner of 75 percent of shares in the Poti Free Industrial Zone. In 2014-2016, CEFC was a fast-growing company whose turnover amounted to USD 40 bn in 2016. However, in 2017, one of the heads of CEFC, Patrick Ho, was arrested in New York. He was charged with bribing officials in African countries to promote the interests of the Chinese company. CEFC was also accused of trading in weapons and evading sanctions imposed on Iran. The company founder and former head, Ye Jianming, who came to Georgia and met with the prime minister in 2016, is on the wanted list.

At the time when CEFC was already involved in international corruption scandals, in February 2018, Georgia’s former Prime Minister Irakli Gharibashvili was appointed an advisor to the Supervisory Board of the company managing regional projects of CEFC Energy Company Limited.

On March 4, 2019, Irakli Gharibashvili returned to politics as the political secretary of the ruling Georgian Dream party. In September of the same year he was appointed as the Minister of Defense. According to the asset declaration filed by him in 2020, he worked in the Euro-Asian Management Group until August 2019. Gharibashvili became the Prime Minister of Georgia for the second time on February 22, 2021. Irakli Gharibashvili received a remuneration of GEL 410,704 from the Euro-Asian Management Group.

Ivane Chkhartishvili, a Georgian businessman, was involved in negotiations on CEFC’s entry to Georgia. Chkhartishvili is the executive director of the Georgia-China Economic and Cultural Development Centre, which was founded on 3 October 2016. The Georgian Chamber of Commerce and Industry and the Georgia-China Economic and Cultural Development Centre jointly founded the Georgia-China Friendship Association, electing Jianjun Zang, the executive director of CEFC China Energy, as its honorary president on 18 October 2016.

In Georgia, CEFC Energy Company Limited is represented by CEFC (Euro-Asian) LLC, which was registered in the Georgian Business Register in August 2016 and is 100% owned by CEFC. In November 2016, by a decree of the Government of Georgia, 3,809 square meters of buildings were directly sold to CEFC (Euro-Asian) LLC for GEL 9.8 million for creating the company's head office, office space and Sino-Georgian Cultural Center.

In April 2020, the Shanghai Court declared CEFC and its subsidiaries bankrupt. In September 2020, the Tbilisi City Court ruled that Euro-Asian Management Group LLC had become the asset manager of CEFC (Euro-Asian).

51% of Eurasian Invest is owned by UK-based Brightstone Finance Limited, and 49% is owned also by UK-based Ecliton Commerce Corp. Both companies are founded according to the laws of the British Virgin Islands and are subject to a high standard of confidentiality. Therefore, it is not available who the owners of the UK-based companies are. However, according to the Georgian Business Register, Giorgi Bachiashvili, the head of Bidzina Ivanishvili's Co-Investment Fund, was originally the director of Eurasian Invest. Therefore, British companies are connected with Ivane Chkhartishvili and Bidzina Ivanishvili.

As for the Poti port itself, in March 2020 the Poti Port operator - APM Terminals – again received land use permit for the first stage of port expansion (first was received in May 2019, which was soon revoked) and the construction of a new dock began. The port expansion project is being implemented by Pace Group, a Georgian company operating in the Poti port area. The cost of the project is USD 93 million. The new dock is being built on an area of ​​27 hectares. The new port will be able to receive ships with a depth of 12.5 meters and a cargo capacity of 50,000 tons. Currently, neither Poti nor Batumi port can accept such ships. New dock will be able to process 6.5 million tons of cargo annually.

The owners of Pace Georgia LLC, a member of Pace Group, and their business partners, Irakli and Teimuraz Kervalishvili, Laura Larioni, Irakli Tateishvili, Tamaz Kapanadze, Apollon Bzhalava and Davit Nadirashvili, donated a total of GEL 620 thousand the Georgian Dream and its presidential candidate - Salome Zurabishvili, in 2017-2018. In addition, three months after receiving the land use permit for the expansion of the Poti port, in 2020, Irakli and Teimuraz Kervalishvili, Laura Larioni and Irakli Tateishvili donated a total of GEL 200,000 to the Georgian Dream.

For comparison, the total investment of the port of Anaklia would be up to USD 2.5 billion, it would receive vessels with a depth of 16 meters, and the port cargo processing capacity would reach 100 million tons per year.

In January 2020, the Georgian government terminated the contract with the Anaklia Port Construction Company - Anaklia Development Consortium. The search for new investors to build the port has not yet begun. On March 4, Natia Turnava, the Minister of Economy and Sustainable Development announced that a tender for getting an investor in the Anaklia port project will be held in the near future.