Georgia's economy depends on Russia mainly through tourism, foreign trade and remittances and this is a significant challenge for our country's economic security. Particularly problematic is a high dependence of Georgian wine export on Russia market, Russian tourists visiting Georgia and the import of Russian wheat.

During recent years, exports of Georgian products to Russia have been growing, reaching about USD 500 million in 2019. Russia's share in Georgia's total exports were 13.2%. However, the Covid 19 pandemic has had a significant impact on exports to Russia, with its share falling to 11.7% in the first quarter of this year.

Up to 70% of wheat consumed by Georgia comes from Russia. Russia's share in Georgia’s wheat imports is over 90%.

Georgia’s dependence on Russian tourists is the most important factor for Georgia’s economy. In 2019, Russian visitors spent about USD 700 million in Georgia. The share of Russian visitors in the total number of foreign visitors to Georgia reached a maximum of 16% in 2018. Due to the restriction on flights imposed from July 2019, Russia's share in Georgian tourism decreased to 15.7%. The ongoing pandemic has also had a significant impact on the influx of visitors from Russia. In the first quarter of 2020, the number of visitors from Russia decreased by 32%, while its share decreased to 13%.

Many scholars believe that Georgia's economic dependence on Russia causes some threats, as Russia has repeatedly used economic leverage against Georgia over the past 15 years. For example, in 2006 Russia cut off natural gas and electricity supplies to Georgia, then it banned the export of products from Georgia to Russia. At the end of the year, it started deporting Georgian citizens. After the events of June 20, 2019, the Kremlin banned flights from Russia to Georgia and this restriction is still in force.

Therefore, it is important to be informed about the level and trend of Georgia's dependence on Russia. Transparency International Georgia has explored key areas where Georgia's economy heavily depends on Russia. These areas are: foreign trade, tourism and remittances sent by emigrants.

The experience of 2015 is also interesting, when the Georgian-Russian relations were not complicated, but due to the economic crisis in Russia, Georgia's exports to Russia decreased by 41%, and remittances from Russia decreased by 46%. In total, approximately USD 0.5 billion less was transferred to Georgia from these two sources. This decline affected Georgia’s economy, especially its currency exchange rate. However, in 2015 the economy of Georgia did not stop growing and ultimately grew by 3%.

In 2006, when Russia declared de facto trade boycott to Georgia, Russia's share in Georgia's total exports was 18% (USD 154 million). After that, Georgian exports to Russia almost stopped and in 2008-2012 Russia's share was up to 2% (an average of USD 34 million a year).

The export of Georgian products to Russia was fully restored in 2013 after the change of the Georgian government. In 2013-2014, Georgia's exports to Russia increased by 487%, compared to 2012, and reached USD 275 million. In 2015, this figure decreased due to the economic crisis in Russia, but since 2016, rapid growth has begun again, and in 2019, Russia's share in Georgian exports was 13.2%. Last year, Georgia exported USD 497 million worth of products to Russia, which is 2.8% of Georgia's Gross Domestic Product (GDP).

The spread of Covid 19 significantly affected Georgia’s economy, including trade, in the first quarter of 2020. Georgia's exports fell by 22% in March, while total exports fell by 6% in January-March. In March, Georgian exports to Russia fell by 43%, while total exports in January-March fell by 33% (USD 44 million). In the first quarter of this year, as the level of decline in Georgia’s exports to Russia exceeded the level of contraction of total Georgia’s exports, Russia's share in Georgia's exports fell to 11.7%. 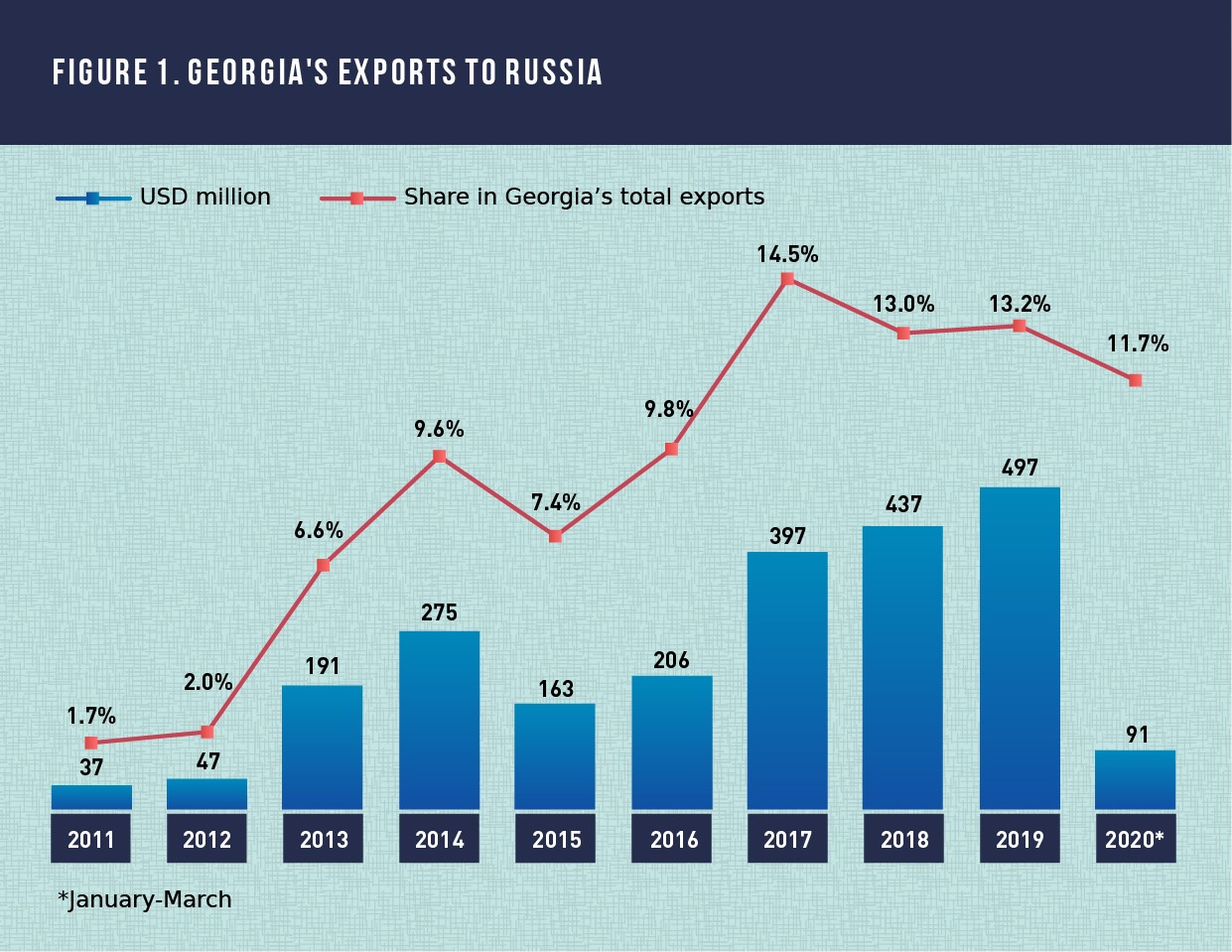 According to 2019 data, wine (USD 133 million) was number one commodity in the export of goods from Georgia to Russia. Other large export commodities were: ferroalloys – USD 115 million, mineral and still water – USD 61 million and alcoholic beverages – USD 35 million. These four commodities comprised 69% of Georgia’s total exports to Russia.

The most significant decrease (- 37%) in the first quarter of 2020 was in the export of ferroalloys. Exports of wine, mineral and still water and alcoholic beverages also declined.

If we disregard the effect of Covid 19 pandemic, Georgia would lose about USD 500 million a year in revenue from Russia's market in case of Russia's toughest trade restrictions. However, it should be noted that after the 2006 trade boycott and the 2008 war, the export of Georgian products to Russia did not fully disappear. Although Russia's share in Georgian exports fell in the first quarter of 2020, at this stage it is difficult to estimate how much this decline will ultimately be and to what extent Georgia's dependence on the Russian market increase or decrease.

It should also be noted that due to the pandemic, Georgia's total exports in 2020 will decrease more than the potential Russian boycott can harm us. 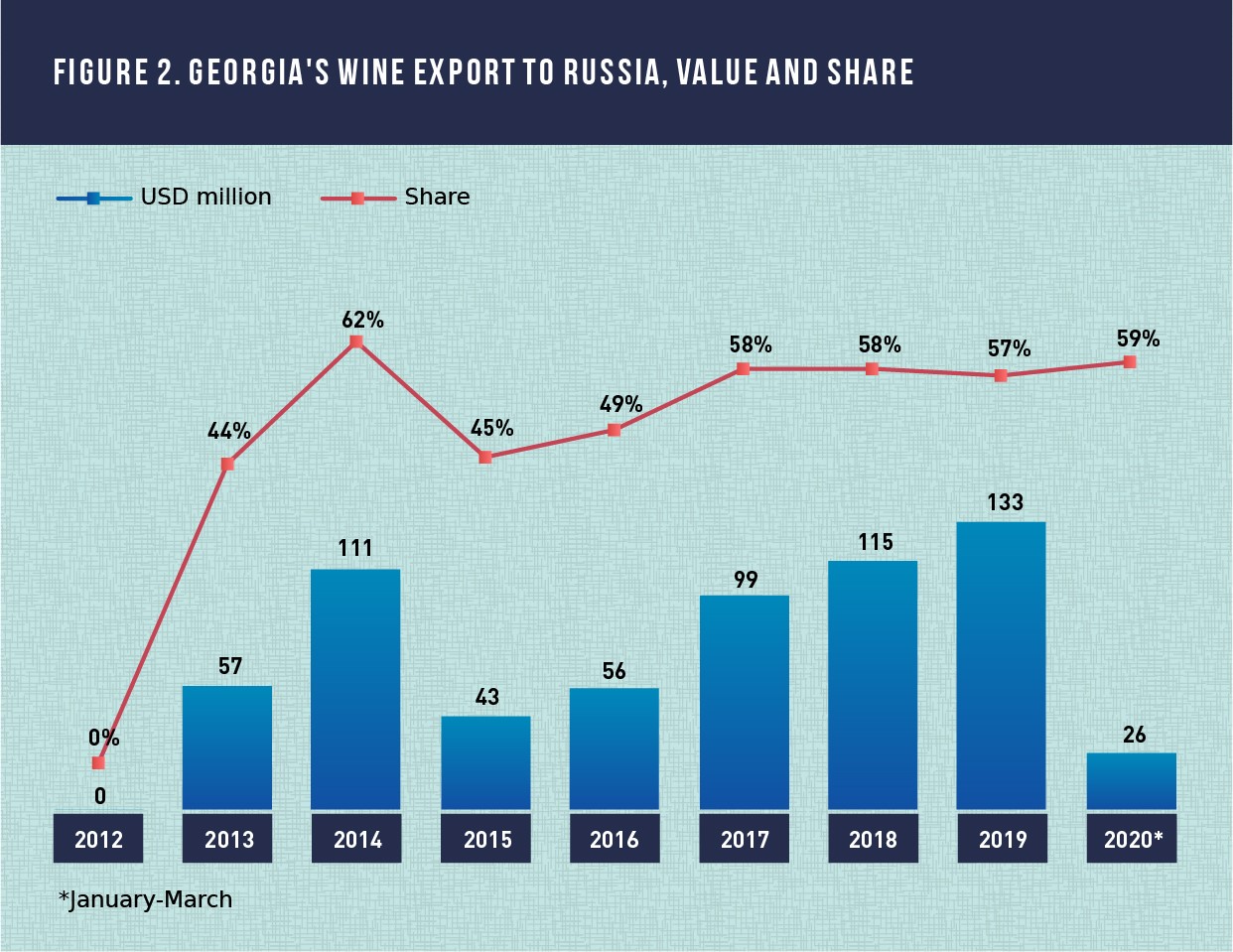 High dependence of Georgia’s wine exports on the Russian market carries certain political risks. As we have already mentioned, the boycott of Georgian products by Russia in 2006, as well as potential restriction of Georgian wine exports to Russia, discussed at the Russian Duma due to the events of June 20, 2019, clearly showed that reliance on the Russian market is a challenge to Georgia's economic and political security. The people living in Kakheti region most heavily depend on the revenue from wine exports, and in case of the export ban, they will suffer the most, since many families do not have an alternative source of income.

Georgia has a negative trade balance with Russia - we import more products than we export. In 2019, imports from Russia amounted USD 976 million (11% of Georgia's total imports).

In 2019, Gasoline had the largest share (20%) in Russia’s exports to Georgia. It was followed by wheat - Georgia imported wheat worth USD 91 million from Russia. It is important to focus on wheat, as up to 70% of Georgia's wheat consumption depends on Russia’s imports. However, since 2015, when the share of Russian wheat reached 82%, a downward trend has been observed.

In the first quarter of 2020, compared to the same period of the last year, wheat imports from Russia to Georgia increased from 72 thousand tonnes to 87 thousand tonnes. At the same time, 100% of imported wheat was Russian. 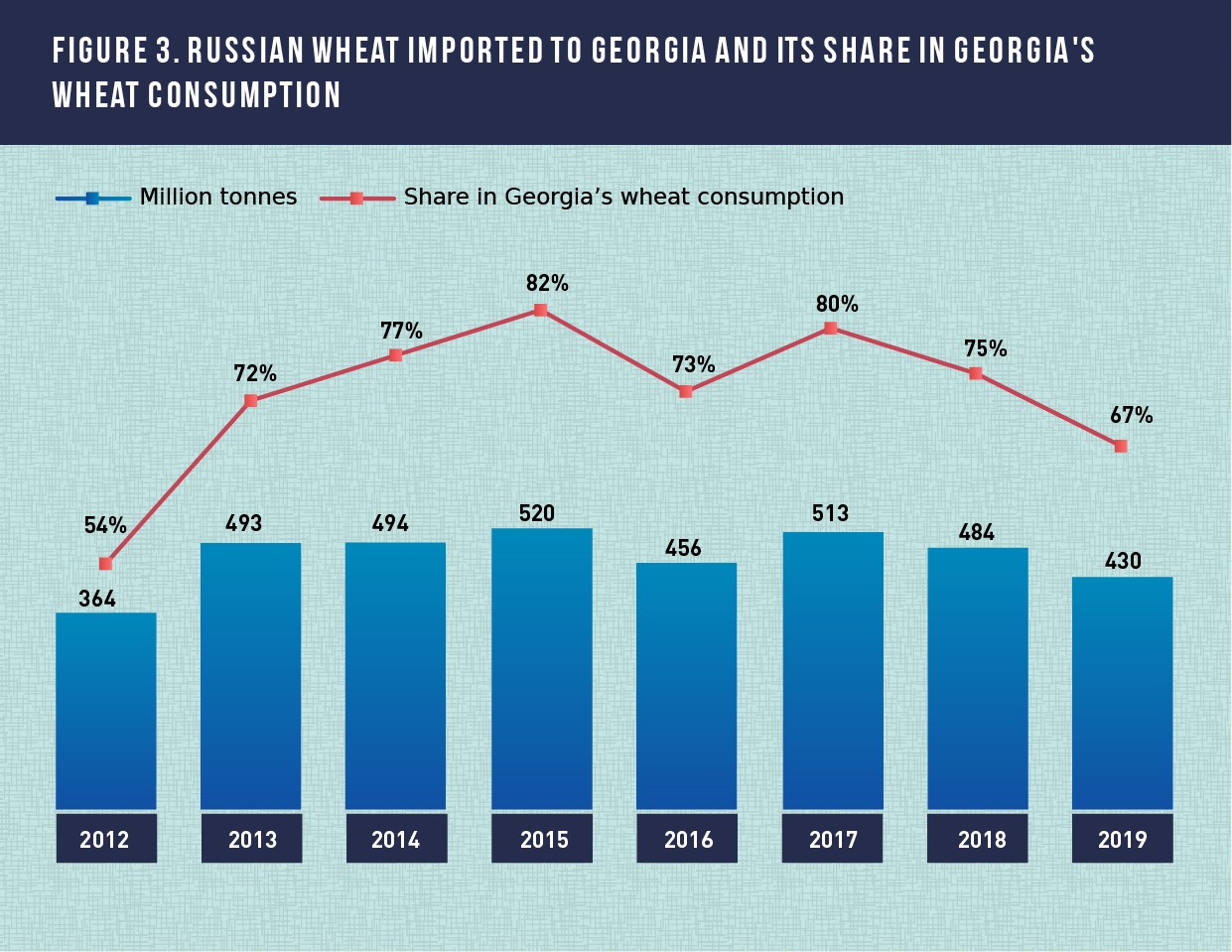 Such a high dependence on wheat imports from Russia also poses certain threats, because for political or other reasons, the halting of wheat imports from Russia to Georgia can cause a shortage of wheat in Georgia for some time and increase the price of bread. The events that have been going on around Russian wheat for several weeks are the proof of this. Russia has virtually suspended its wheat exports until July 1 of this year due to the Covid 19 pandemic. 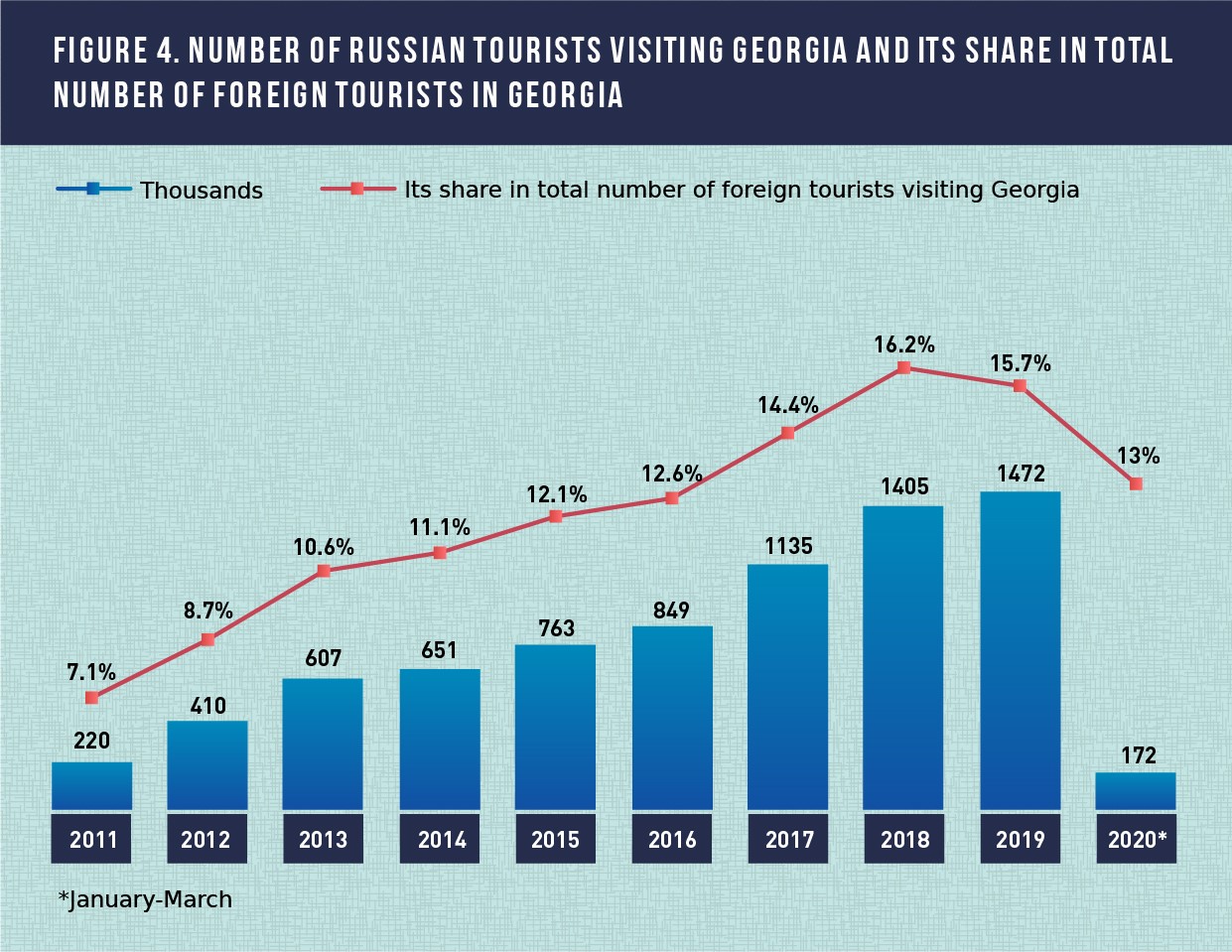 Data, sorted by country, on earnings from tourism in Georgia is not available, but according to Georgia’s National Tourism Administration, one Russian tourist spent an average of GEL 1,282 in Georgia in 2019, which means that, in 2019, Georgia received about USD 700 million from Russian tourists (4% of Georgia's GDP). In the first quarter of 2020, this number stood at USD 70 million.

If we disregard the effect of Covid 19 pandemic, Georgia would lose about USD 700 million a year if the Russian government banned its citizens from traveling to Georgia. To compare, due to the borders closed to tackle the pandemic, Georgia will lose at least USD 1 billion from tourism in 2020.

Money earned by Georgian emigrants are transferred to Georgia mainly in the form of remittance. The share of Russia in total remittances of Georgia has decreased in previous years. In 2012, Russia's share in Georgia's total remittances was 56%, while in 2019, it was only 25%. This was caused by the following reasons: remittances from Russia to Georgia have been declining, while remittances from other countries have been increasing. Decline in Russian remittances started in 2014, when falling oil prices and sanctions imposed by Western countries caused an economic crisis in Russia. In 2019, 1.9 times less money was transferred from Russia to Georgia than in 2013. In addition, in recent years, new streams of Georgian emigrants have been mostly moving to EU countries than to Russia, which has increased remittances coming from EU countries. Remittances from Israel have been growing significantly too. All this reduced the share of Russia.

Despite the decline, in 2019, USD 429 million (2.3% of Georgia's GDP) was transferred from Russia, which is a significant amount. If we look at potential risks of destruction of remittances coming from Russia, modern technologies make it practically impossible to completely stop sending money by banning money transfers. Even in 2006, despite the deportation of many Georgians, remittances from Russia increased by 78%, compared to 2005, and by 48% - the next year. This was due to the high economic growth rate of the Russian economy in those years.

The year 2020 also began with a decline in remittances from Russia: in January it decreased by 5.2%, in February - by 9.3%, and in March - by 28.3%. The Covid 19 pandemic clearly affected the March statistics. However, it is interesting to note that Georgia’s total remittances coming from all countries decreased by 9% in March, which is 3 times less than the decrease from Russia. In March 2020, Russia's share in Georgia's remittances was 20.2%, which is less than in March 2019 (25.5%). In January-March, remittances from Russia fell by 15% (USD 14.4 million). During the same period, Russia's share in Georgia’s total remittances was 21%. 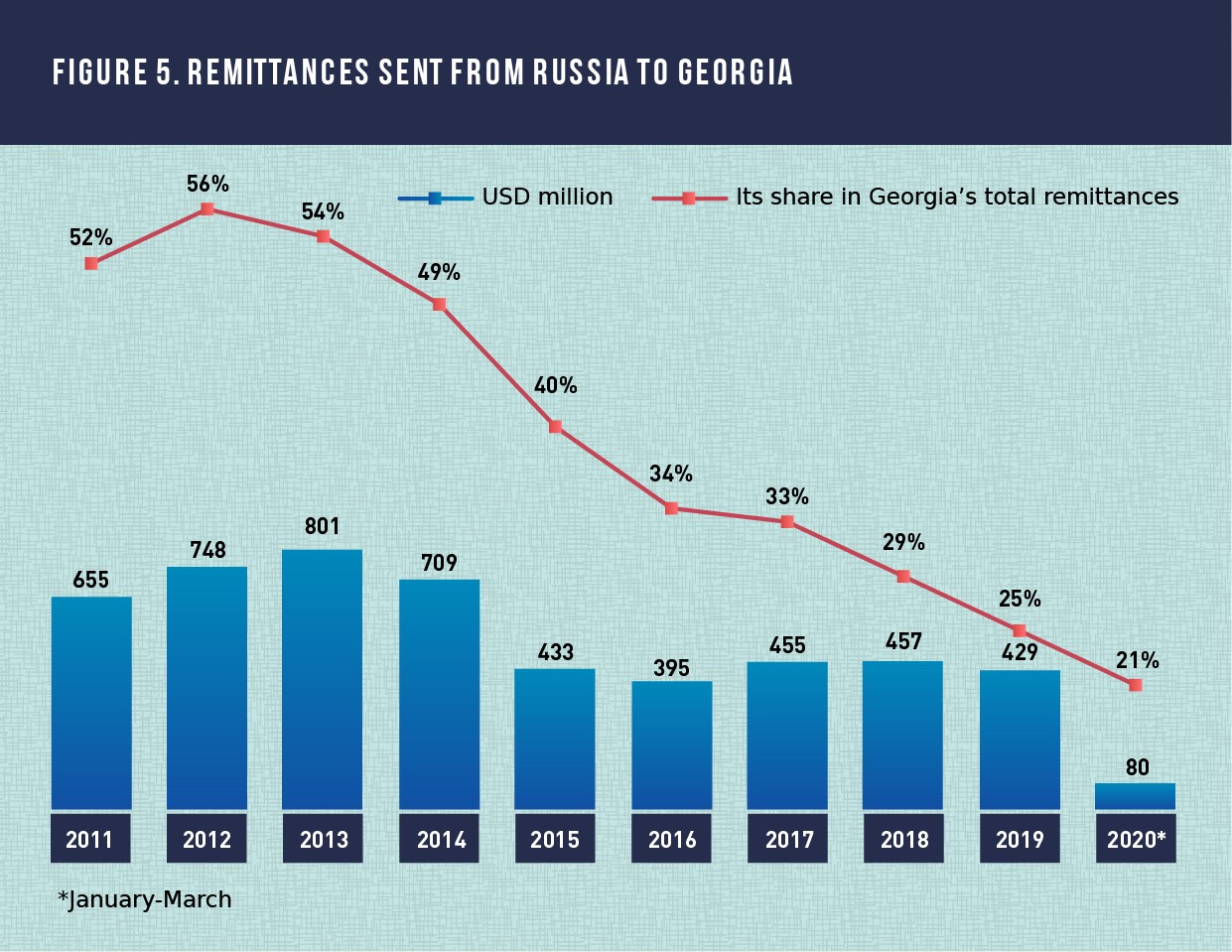 If we disregard the effect of Covid 19 pandemic, Georgia would lose about USD 400 million a year if the Russian government could fully suspend remittances. However, this is a very unrealistic scenario, because Georgian emigrants would send money through other channels. Mass deportation of Georgians from Russia is the only way to stop money transfers, but since a large part of Georgians living in Russia are Russian citizens, it is virtually impossible scenario.

In 2019, Georgia received about USD 1.6 billion from Russian tourists, remittances and goods exported to Russia, which was 9% of Georgia's GDP.

Georgia's economic dependence on Russia has been "naturally" declining since March 2020 due to the Covid 19 pandemic. After the end of the pandemic, Georgia has the opportunity to transform its economy and become less dependent on Russia. This at least will be inevitable in tourism, as the share of tourism, including Russian tourists, in Georgia’s economy will decrease and it may take several years to return to the level of 2019.

Georgia's economy will suffer far more from Covid 19 than Russia can potentially economically hurt us. This will give the Georgian population and government an opportunity to be less vulnerable to economic sanctions expected from Russia, and develop some sort of immunity.

At present, the high dependence of wine exports on the Russian market and wheat imports from Russia remain the main challenge for Georgia's economic security. In addition, the disruption of exports or imports is easier than that of tourism and remittances.