In November 2015 the parliamentary majority brought forward a proposal to amend the Election Code of Georgia which aims at redrawing borders of current single-mandate majoritarian districts. The explanatory note of the draft law states that the amendment was triggered by the 28 May 2015 ruling of the Constitutional Court of Georgia that found the current majoritarian system violating Articles 14 (right to equality) and 28 (right to vote) of the Constitution. The Court found that the large discrepancy in the size of constituencies of majoritarian districts was unacceptable, resulting in different “weight” of a vote in different constituencies.

The proposed reform would indeed decrease the major disparity in the sizes of districts. It does not, however, fully address the Constitutional Court’s concerns, which based its ruling on the equality of vote standards defined by the Venice Commission.

The Constitutional Court determined in its ruling that equality of votes and giving equal opportunities to voters should be the main principle of definition of borders of the electoral districts. The Election Code should ensure that the districts are defined in a way that equality of votes and adequate representation are achieved. This means, that the number of voters in every constituency should be equal, to the highest extent possible, so that the equal “weight” of votes is guaranteed. The ruling also mentions that when defining the borders of the constituencies, geographical specifications, as well other important social criteria can be taken into account. In some cases, depending on special characteristics of the district, some reasonable discrepancy might be allowed. However, each such regulation will fall under supervision of the Constitutional Court.

Along with the Constitutional Court, the crucial importance of the principle of equal weights of votes is underlined in the Code of Good Practice in Electoral Matters of the Venice Commission. According to these guidelines, the borders of the electoral districts should be defined in such manner, that appropriate mandates be allocated proportionally to the number of voters. Furthermore, permissible departure from the norm should not be more than 10%, and should certainly not exceed 15% except in special circumstances (protection of a concentrated minority, sparsely populated administrative entity)[1].

As the borders of the constituencies in Tbilisi are not yet defined, it is hard to predict what is going to be a deviation from the average number of voters in each constituency. In case of Rustavi, this is easier to predict, as there are only two constituencies here. We tried to calculate deviation percentage in each constituency based on the data attached to the draft law and checked if the new borders are in compliance with the ruling of the Constitutional Court and Code of Good Practice of the Venice Commission. Because of the above mentioned reasons, we didn’t include 18 constituencies from Tbilisi, therefore sizes of 55 constituencies are calculated, instead of 73. 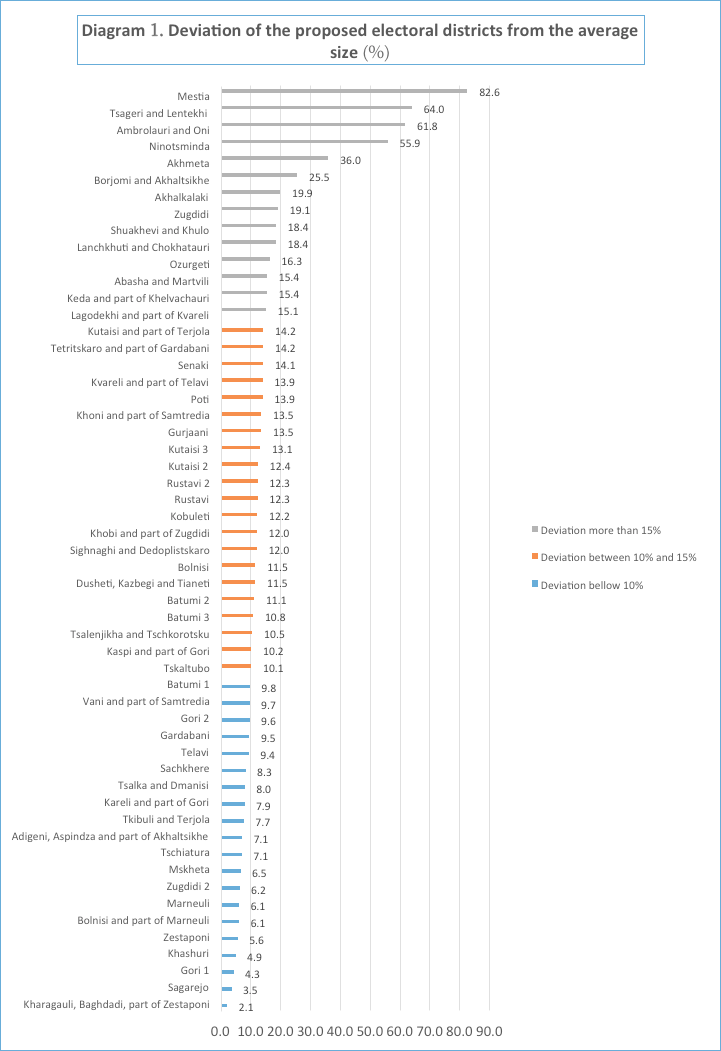 Furthermore, our organization has underlined numerous times, that equalizing the current single mandate districts will be extremely complex, as it will result in mechanical merging/splitting of districts with various geographical/historical characteristics. Merging and splitting of various administrative units and their villages clearly demonstrates the problem with the initiated draft law.

This is why, among other important reasons, to prevent this problem, the position of the NGOs was and remains, that, using constitutional amendments, the 2016 parliamentary elections should be held in a fully proportional electoral system.

[1]This standard of the Venice Commission is also referred to in the motivation section of the ruling of the Constitutional Court, however the rule regarding permissible departure from the norm is presented in a different manner. This can be reasonably explained with a flaw in translation and should not be perceived as a different standard set by the Constitutional Court, as the Court writes that it is quoting the principles established by the Venice Commission. See motivation section of the ruling, paragraph 25.