How matters stand in the Rustavi Metallurgical Plant – Review

Who is behind the companies  representing the disputing parties

The Rustavi Metallurgical Plant was purchased by Badri Patarkatsitshvili for 36 million US dollars back in 2005. Up until his death, the plant was owned by JSC Georgian Steel, Badri Patarkatsishvili’s company. Following Mr. Patarkatsishvili’s death in February 2008, all 100 % of the JSC Georgian Steel (the owner of the Rustavi Metallurgical Plant) shares were transferred to Joseph Kay in a disputed process. 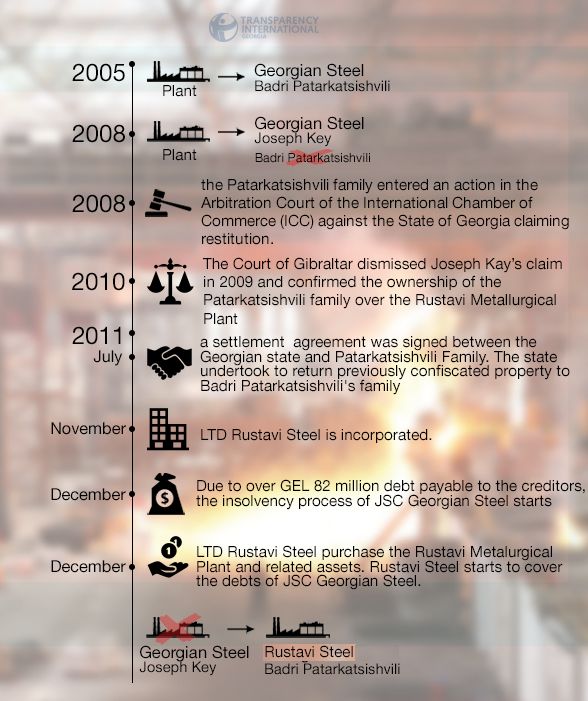 Over the period from 2008 to July 2011, the Rustavi Metallurgical Plant belonged to JSC Georgian Steel, which, in turn, was controlled by Joseph Kay. After the signing of the arbitration settlement in 2011, the government started to return the seized assets to Badri Patarkatsishvili's family. On 7 July 2011, the JSC Georgian Steel shareholders took a decision to make adjustments in the Supervisory Board composition and appointed a new director who, subsequently, pursued the Patarkatsishvili family interests.

Financial problems within the Plant and the rehabilitation process

Within the rehabilitation plan, the Metallurgical Plant assets owned by JSC Georgian Steel (land, buildings and movable property) were assigned to Rustavi Steel LLC (a company belonging to Badri Patarkatsishvili's family) under a contract of purchase signed on December 27, 2011. On the same date, Rustavi Industrial Group LLC (another company belonging to Badri Patarkatsishvili's family) signed another contract with JSC Georgian Steel to purchase bulk slag and ash that were in the latter’s possession. Rustavi Industrial Group, in turn, sold the above property to Rustavi Steel, who by that time already owned the Rustavi Metallurgical Plant.

It was during that period that Badri Patarkatsishvili's family regained the ownership of the Rustavi Metallurgical Plant (the enterprise proper as well as its property) undertaking thereby to clear the multimillion arrears with JSC Georgian Steel.

Legal disputes against the companies owned by the Patarkatsishvili family started in 2013 and were aimed at invalidating the sale of the Georgian Steel assets and identifying it as the owner of the Metallurgical Plant. It is worth noting that Georgian Steel, the company controlled by Joseph Kay, and its representatives resorted to court challenging the actions that took place in 2011 (the steel Plant and slag and ash purchase contracts) only in 2013. Altogether, there have been 3 legal disputes since 2013, one is still underway.

The disputes in the first and second instance courts

In all three cases, Rustavi Steel LLC  (the current owner of the Rustavi Metallurgical Plant) lost the lawsuits in the first instance courts. The judge in all three cases was Lasha Kochiashvili.

The claimants  in the disputes initiated in 2013 and 2014 (the current owners of JSC Georgian Steel) highlighted several circumstances, and specifically that  the rehabilitation Manager and then JSC Georgian Steel director had agreed with Rustavi Steel LLC in advance to conclude unfavorable contracts with JSC Georgian Steel. They underscored that the asset purchase contracts were for show and that the actual value of the assets exceeded the amount specified in the contract. The claimant argued that considering to the purpose of rehabilitation it was impermissible to sell the greatest part of the company’s assets, as the  remaining creditors could have been covered without fully divesting its assets.

The Georgian Supreme Court overturned the lower court decisions in two cases. The Supreme Court ruling highlighted that, following the rehabilitation plan, sale of the enterprise assets constituted one of the possible outcomes of the rehabilitation process. The burden was on the plaintiff to provide sufficient evidence to prove that the rehabilitation goals could have been reached by other means envisaged in the rehabilitation plan; that it was possible to satisfy all secured creditors without the full realization of assets. The plaintiff provided only verbal explanations that the assets were sold at a low price. The Supreme Court also underscored that the primary goal of the Law on Insolvency Proceedings is to secure the satisfaction of creditors and only after this to seek to ensure the continued viability of the company rather than vice versa, as interpreted by the Court of Appeal.

It is important to note that the decision to sell the JSC Georgian Steel assets was taken in accordance with the rehabilitation plan endorsed by the creditors. In addition, the case does not contain any justification either as to how the debt of over GEL 82 million would have been covered by alternative means other than alienation of the enterprise assets.

The Supreme Court considered that there was no evidence to prove that the actions of the former Director of JSC Georgian Steel and the Rehabilitation Manager had  been pre-agreed with Rustavi Steel LLC, neither was the plaintiff's claim confirmed that the assets of JSC Georgian Steel had been sold at a price lower than their market value. The Supreme Court noted in this regard that the applicant’s contention according to which the disputed property was sold at a price lower than the market value must have been supported by relevant evidence (such as the document assessing the market value of the vendible), which the petitioner did not produce. Subsequently, the Supreme Court found that the claim was not substantiated in this part while the lower instance courts had erred in their assessment of the situation. The Supreme Court highlighted that the contract price is subject to the agreement between the parties, and no one is limited to specify his/her suitable price in the contract, even if it does not correspond to the market value of the vendible asset.

While the Supreme Court's decision confirmed the legitimacy of the asset sale, Ms. Eter Mtvralashvili filed a new suit on 29 December 2014 thereby requesting to nullify the contract of purchase of the assets (slag and moveable and immovable property).

Importantly, Eter Mtvralashvili acquired the requested right from Metacom Ltd on 26 December 2014 and became a JSC Georgian Steel creditor (Metacom Ltd never articulated any claims against the parties in the dispute). Metacom Ltd is the creditor of the 4th level, and the deadline for satisfying its credit expires in 2019. As to Eter Mtvralashvili’s right of claim, it amounts to GEL 4, 553.48.

The lawsuit of the plaintiff states that the full sale of JSC Georgian Steel assets contradicts the objectives of rehabilitation, is against the interests of creditors, and jeopardizes the enforcement of her claims pursuant to the rehabilitation plan. She also requested the court to impose a ban on Rustavi Steel’s right to dispose of or register title of the immovable property owned by it. The plaintiff claims that the non-application of the interim remedy would make it impossible to enforce any future judgment since the defendant would try its best to register title of the transferred multi-million property in another person’s name by signing a sham contract, thereby excluding the possibility for the enforcement of the court decision. This, in turn, would significantly affect the plaintiff's legitimate interest and render it pointless to pursue the dispute in court.

In response, Rustavi Steel LLC requested the court to change the interim remedy offering it to deposit GEL 4,553. 48 on the court’s account, since the plaintiff's officially declared interest was to obtain the sum in the amount of GEL 4,553. 48.

The court rejected the defendant's request to change the interim remedy, highlighting that such a change would put the enforcement of the decision at risk in the event the court decided in favor of the claimant. Consequently, the court granted the plaintiff’s request and imposed a ban on the property worth tens of millions of Lari in order to secure the claimed GEL 4,553.48.

The court decision raises considerable doubts as to its proportionality. It is not clear what risks the court was trying to safeguard against there being no real peril for Ms. Mtvralashvili’s petty claim to be rejected. It is not clear either what caused the rejection of the suggested alternative interim measure. The alternative measure was fully safeguarding against the risks that the applicant referred to. When making such decisions, it is essential to build them on comprehensive and logical reasoning; any reasonable risk that the court seeks to insure against by its decision must be clearly specified.

The court upheld Ms. Mtvralashvili’s claim by its 24 February, 2015, decision and annulled the disputed contracts. It should also be pointed out that the Supreme Court confirmed the legality of the lower court decision to annul the contracts (the JSC Georgian Steel rehabilitation process as well as the actions within its scope are deemed lawful; also, Rustavi Steel LLC is recognized as a bona fide purchaser of the assets who is also discharging the JSC Georgian Steel debt pursuant to the asset contract purchase agreements, and so on). The annulment of the same contracts on the same grounds and against the same defendants by the first instance Court raises additional questions in connection with the above case.

The importance of the Rustavi Metallurgical Plant being able to smoothly continue its operations must also be taken into account. The Plant representatives commented at a  press conference held on 1 March 2015 that the ban imposed by Tbilisi City Court on 24 February 2015 has deterred the Plant’s normal functioning. This has compelled the Plant management to put 360 of its employees on indefinite unpaid leave.

Creating such artificial and unjustified barriers for the enterprise that employs thousands of people is totally unreasonable. It is essential that everyone, including common courts, acknowledge these risks in advance and take decisions only after having fully assessed them.

The role of creditors significantly increases during the insolvency process of an enterprise; the creditors are also granted greater powers compared to all the other management structures. Creditors’ decisions are the best reflection of the actual need facing the company. Therefore, assessing the expediency of such decisions is definitely outside the competence of external entities; especially when the plan under which the sale of assets takes place and which provides for repayment of the enterprise’s multi-million debt is endorsed and approved by the creditors. It is important that the enterprise owned by an insolvent corporation did not stop operation. The functioning of the Plant under the Georgian Steel management does not raise any concerns. The developments around the Rustavi Metallurgical Plant suggest there is a new attempt on the part of the group associated with Joseph Kay to gain possession of the Plant.

This series of concerted actions aimed at gaining control over the Metallurgical Plant undermine any impression that legal actions being taken are based on the principle of fairness. Moreover, the current processes give the present management of the enterprise sufficient grounds to suspect attempts aimed at deterring the functioning of the Plant through initiating an artificial and groundless dispute. We consider that the ongoing court cases appear suspicious, which urges us to closely monitor the process. We can also discern concerted actions of certain interconnected groups (both inside and outside the judiciary). This might be indicative of an unhealthy atmosphere within parts of the judiciary.