In early 1990s, a large portion of the internally displaced persons (IDPs) from Abkhazia and South Ossetia had been resettled in collective centers throughout the rest of the country. Some of these collective centers have since been either partially or fully renovated through state of international donor funding. The living conditions of many collective centers, however, do not meet even the minimum standards.

The following are TI Georgia’s findings:

The Paipuri Settlement in Zugdidi consists of several collective centers that house IDPs as well as a few dozen homeless citizens.

The so-called Karavi collective center, located inside the building of a former collective farm market, is in an especially dire condition. The center has not been renovated in any way and currently houses 14 families, of which 7 are internally displaced. The majority of its residents are below the poverty line. They rely on the social and/or IDP assistance as their sole source of income.

The physical condition of the building is very poor – the roof is damaged, resulting in rainwater leaks. The rooms are separated with thin wooden boards, windows and floors are damaged, and the sewage system is dysfunctional. All families have to share a single toilet and bathroom. The building is supplied with water on a schedule, only during the morning hours. In many cases, the water is cloudy and unfit for drinking.

Several rooms on the first floor of the building get flooded during rain. The ceilings between floors are coming down. In some places the outside walls are made of wood. The damp rooms are almost impossible to heat in winter. 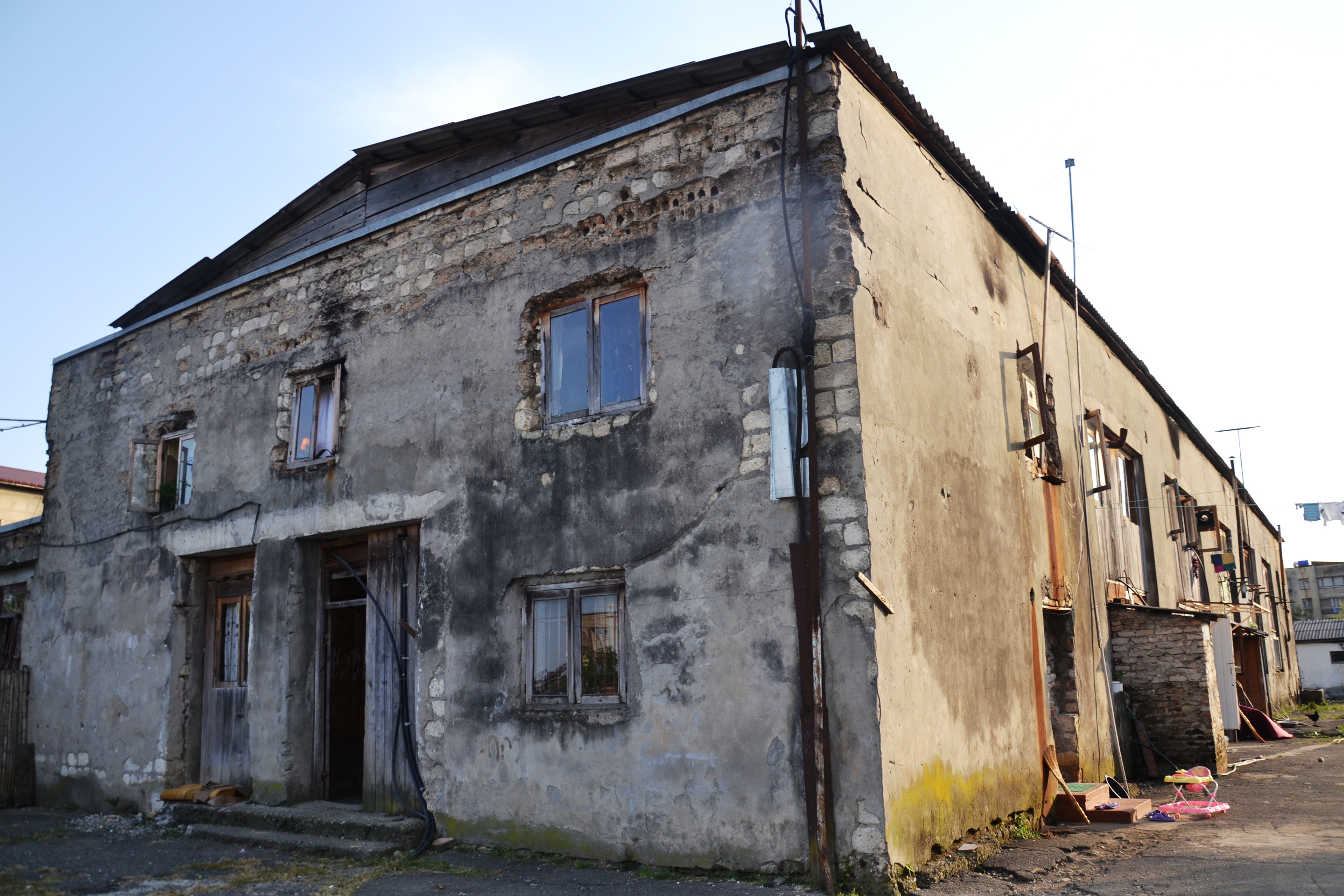 8 IDP families live in the nearby two-story building. The majority of these residents are socially vulnerable. The roof of the building was changed 2 years ago, however, a few families moved elsewhere due to the remaining difficult living conditions. The residents of the collective center do not have land that they can cultivate, and no stable income, except for the IDP and social assistance. The families all use a common bathroom, located in a yard adjacent to the building. According to the residents, they have appealed to public authorities numerous times with the request of alternative accomodation, but no effective steps have been taken in this direction.

The building is supplied with water on a schedule for a total of 4 hours in the morning and in the evening. However, the water is polluted, so the residents use homemade filters and only drink water after having boiled it.

The sewage system located outside the building is out of order, resulting in poor sanitation.

The situation is identical in a nearby collective center located inside a former printing house building that currently houses about 30 families, of which 8 are socially vulnerable.

The roof of the building is damaged to the point that rainwater easily reaches into the rooms below. The rooms are separated with thin wooden boards, with each family occupying an average of 20-25 square meters of space. Windows need changing in all rooms. Some of the residents own land plots in the yard outside the building, however, they say the land is too stony and, therefore, low in yield. All residents share a toilet and a bathroom located outside the building. Water supply is on schedule and is only provided in the morning.

The Vector Settlement is located 3 kilometers out of Zugdidi. This location was planned to be a military base in Soviet times. After the 1990s war the emptied buildings were occupied by internally displaced persons from Abkhazia. The settlement is currently home to more than 100 families.

All residential buildings in the collective center have similar problems, such as damaged roofs, walls and floors. Water is supplied to only a few dozen families, since it only reaches the first three floors of the five-story buildings in the area. The sewage system is out of order. Some families have kitchens and bathrooms set up in the hallways.

The majority of residents are unemployed. Their main source of income is the IDP and social assistance. Only 15 families own agricultural land.

In 2006, roofs on several buildings were renovated by the Save the Children Federation and the National Fund Erani with funding from the Swiss Agency for Development and Cooperation. However, residents report that the renovation works were carried out poorly, resulting in rainwater leaks.

Located on 4 hectares of land near the collective center is a run-down building full of rodents and reptiles, posing threat to local residents. 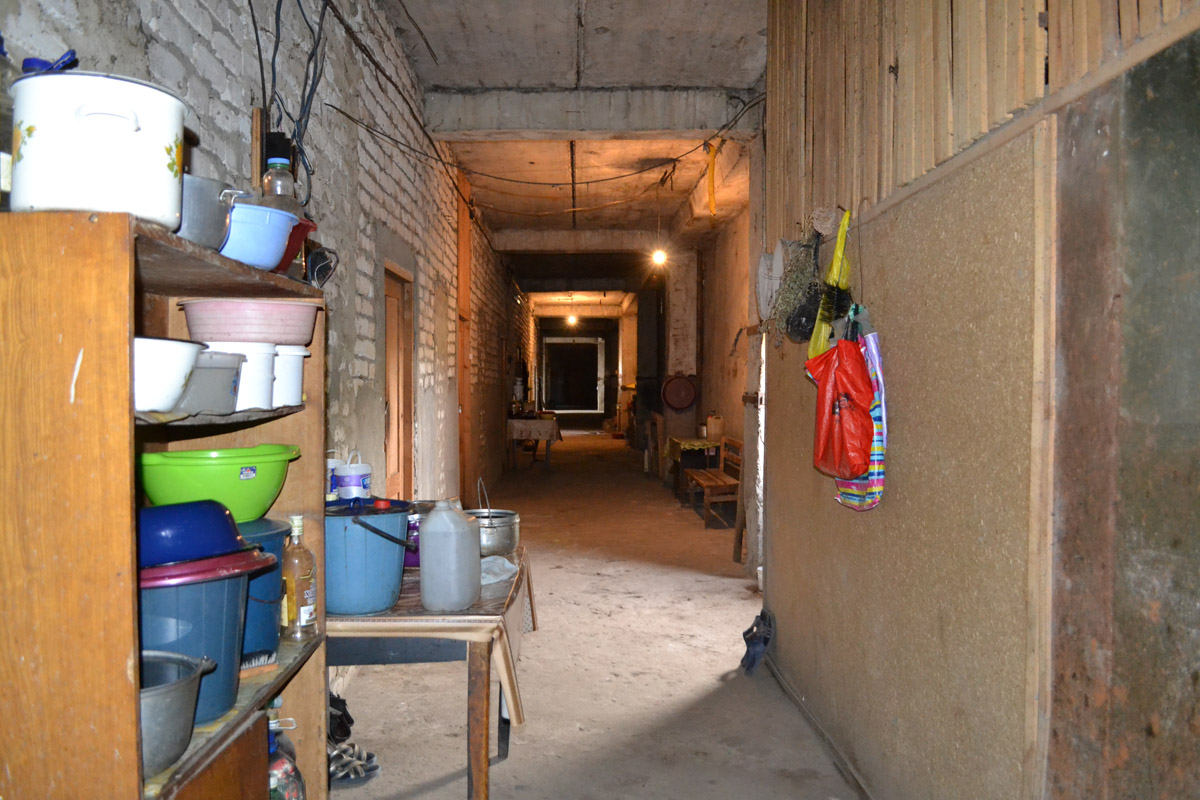 The Zghvaia settlement is located in Tsalenjikha Municipality. It used to be a settlement for tea factory workers in Soviet times. Today it houses a total of 38 local and IDP families.

IDPs at Zghvaia live in 16 two-story houses, some of which are damaged and in need of renovation. In 2013, the Ministry of IDPs funded the renovation of several roofs. 3 houses were rejected from this program, however, even though each one housed at least one family at the time.

The water supply system is out of order. A water well was dug in 2012, however, water is still not being supplied to any building. A damaged water pump has caused oil to mix with the water. The inner roads of the settlement are also damaged. 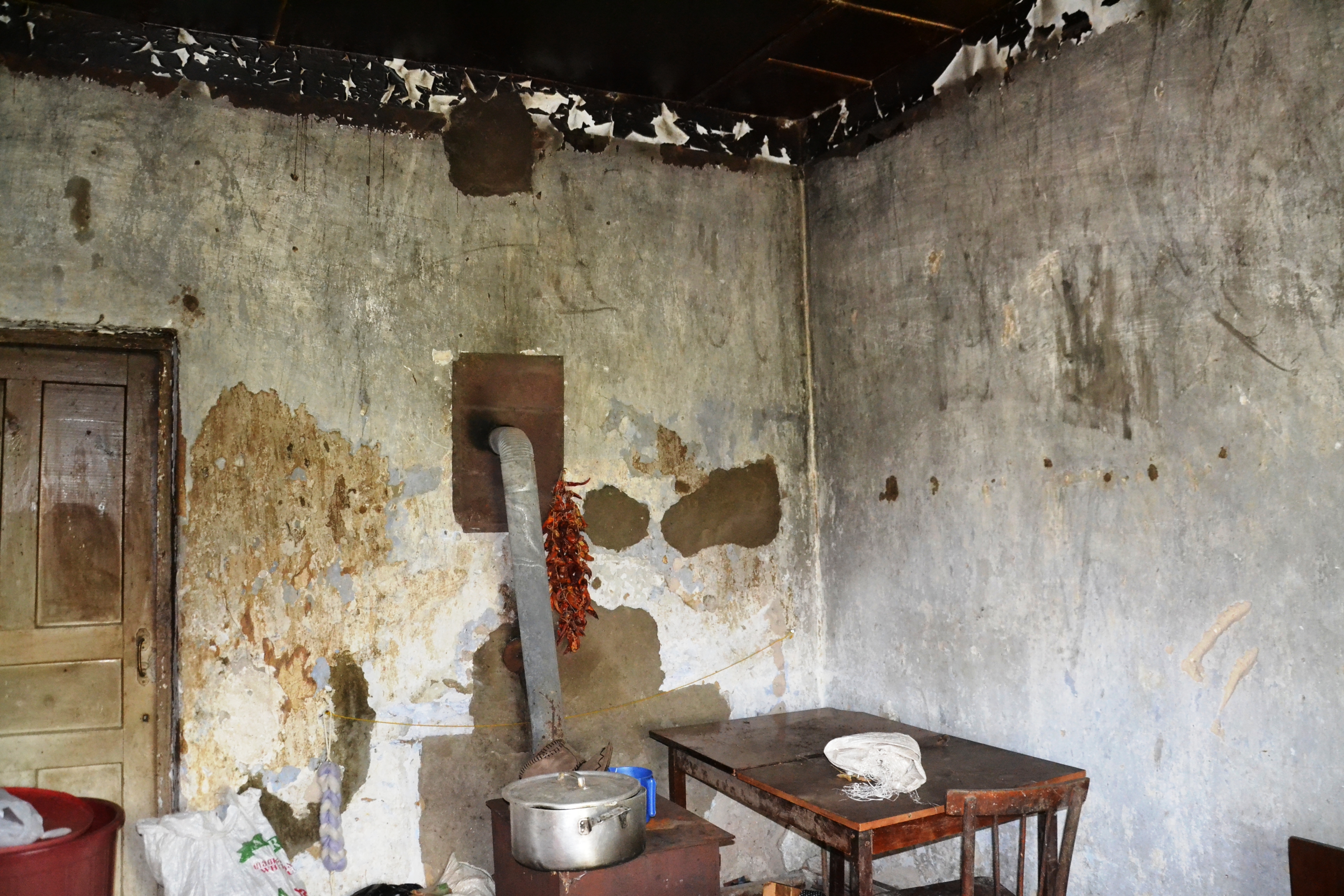 The Potskho-Etseri settlement was originally constructed for workers employed at the construction of the Enguri HPP in Soviet times. The dam is located a few hundred meters from the settlement.

Most of the buildings have been renovated. The main problem here is high unemployment. The residents do not have land that they can cultivate. According to them, the settlement sits on top of the bedrock, the soil is stony and damp, making it impossible to cultivate.

Until 2007, Potskho-Etseri residents were supplied with free power, due to the settlements location inside the so-called red zone of Enguri HPP. However, in 2007 this exemption was revoked for all families. Residents demand to be supplied with free electricity by reintroducing the exemption.

The residents are not allowed to harvest firewood, while the amount of firewood provided by the state is insufficient to last the whole winter.

Potskho-Etseri is connected to the outside world with a single bus line that costs GEL 2,5 and runs until Tsalenjikha-Zugdidi only three times a week. Residents demand more frequent bus runs.

The settlement gets windy almost daily due to its high altitude. High humidity and moisture levels due to its proximity to the Enguri HPP result in a variety of respiratory diseases. 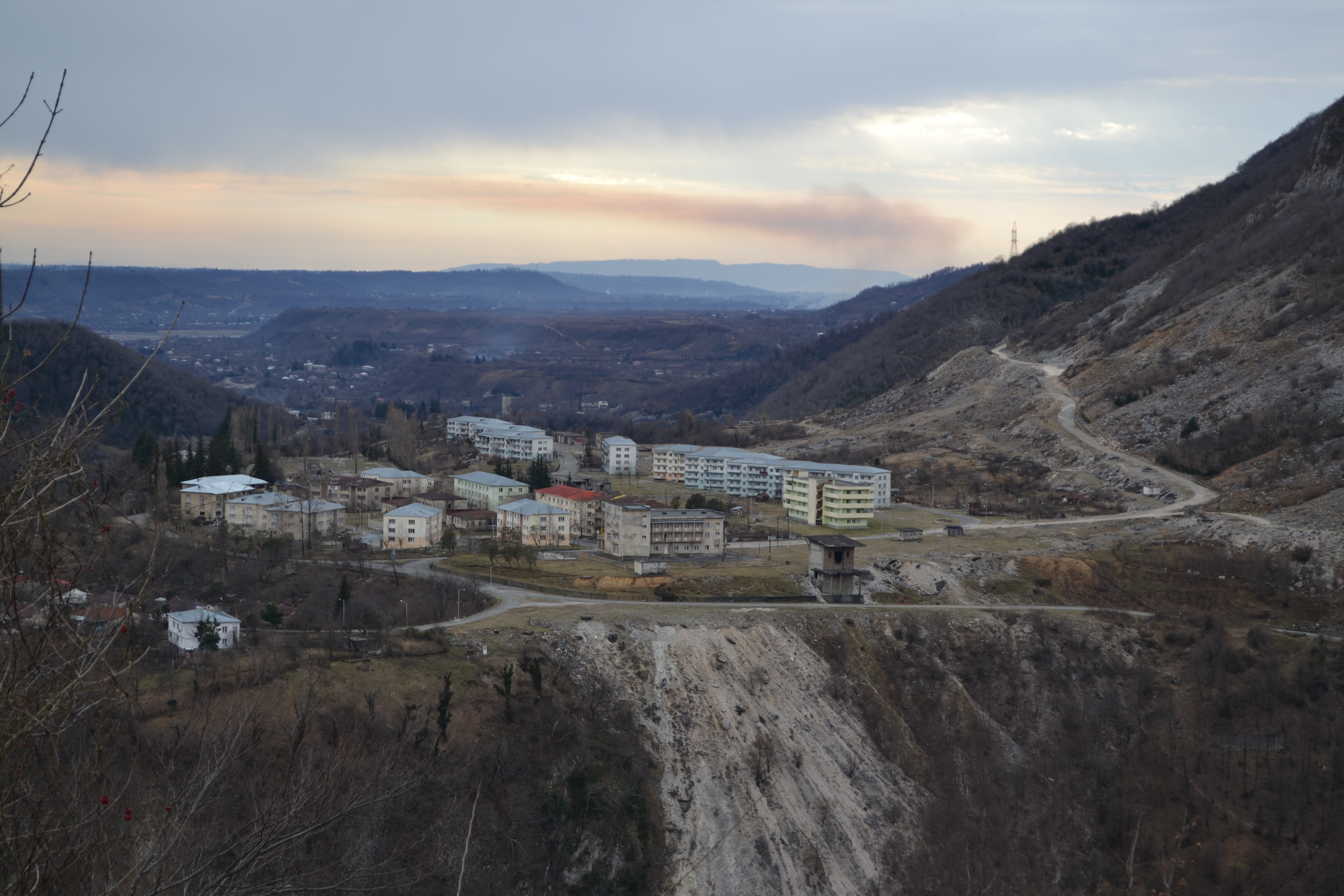 The Kolkhida Sanatorium, located in the former resort village of Menji, Senaki Municipality, is home to 51 IDP families.

The 8-story building is in an extremely dire condition. The roof is completely destroyed leaving the 8th floor uninhabitable. The reinforced concrete slabs used to separate floors are damaged. This results in rainwater reaching down to the 4th floor.

In 2015, the water supply system outside the building was renovated; however, no pipes were installed inside the building. Residents currently have to carry water by hand.

The drainage and sewage systems are also damaged. In many cases, water accumulates in the yard or the basement, resulting in poor sanitation. The settlement is not provided with municipal trash cans. Residents collect their waste in the so-called bunker, which does not have a door and is not being disinfected. Residents report that the municipal cleaning service only cleans out the bunker once a month.

The Kolkhida Sanatorium is not supplied with natural gas, even though Senaki municipality has been almost fully gasified. The residents use firewood for heating in winter.

In 2009, common bathrooms were installed on the 2nd, 4th and 6th floors of building. However, these bathrooms are unusable due to the faulty water supply system. 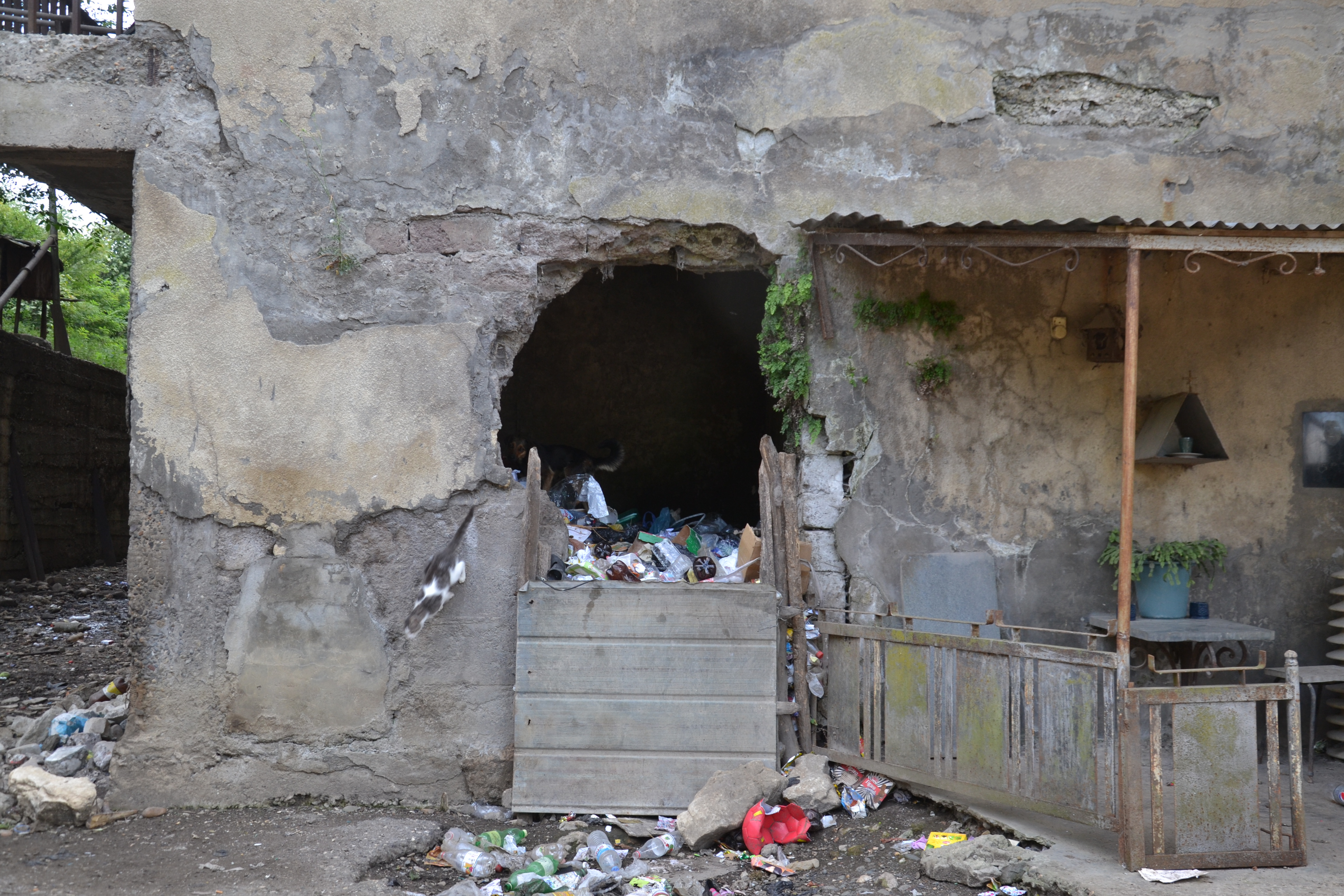 The former tea factory settlement of Kolkhida in Khobi is home to 40 IDP families. All 8 of the 2-story buildings in the settlement have damaged walls, floors, and roofs. Rainwater easily reaches inside the buildings. The drainage, sewage, and water supply systems are out of order. Residents carry water from an artesian well located 1.5 kilometers away. The settlement does not have an outpatient clinic, so the residents receive medical care in Khobi.

The settlement has only two small trash cans, while the Khobi municipal cleaning service collects the accumulated waste only once a month.

More than 20 families own agricultural land. However, most of residents are socially vulnerable, live below the poverty line, and rely on the social and/or IDP assistance as their sole source of income.

Kolkhida settlement residents demand alternative housing, since their current buildings are no longer subject to renovation. 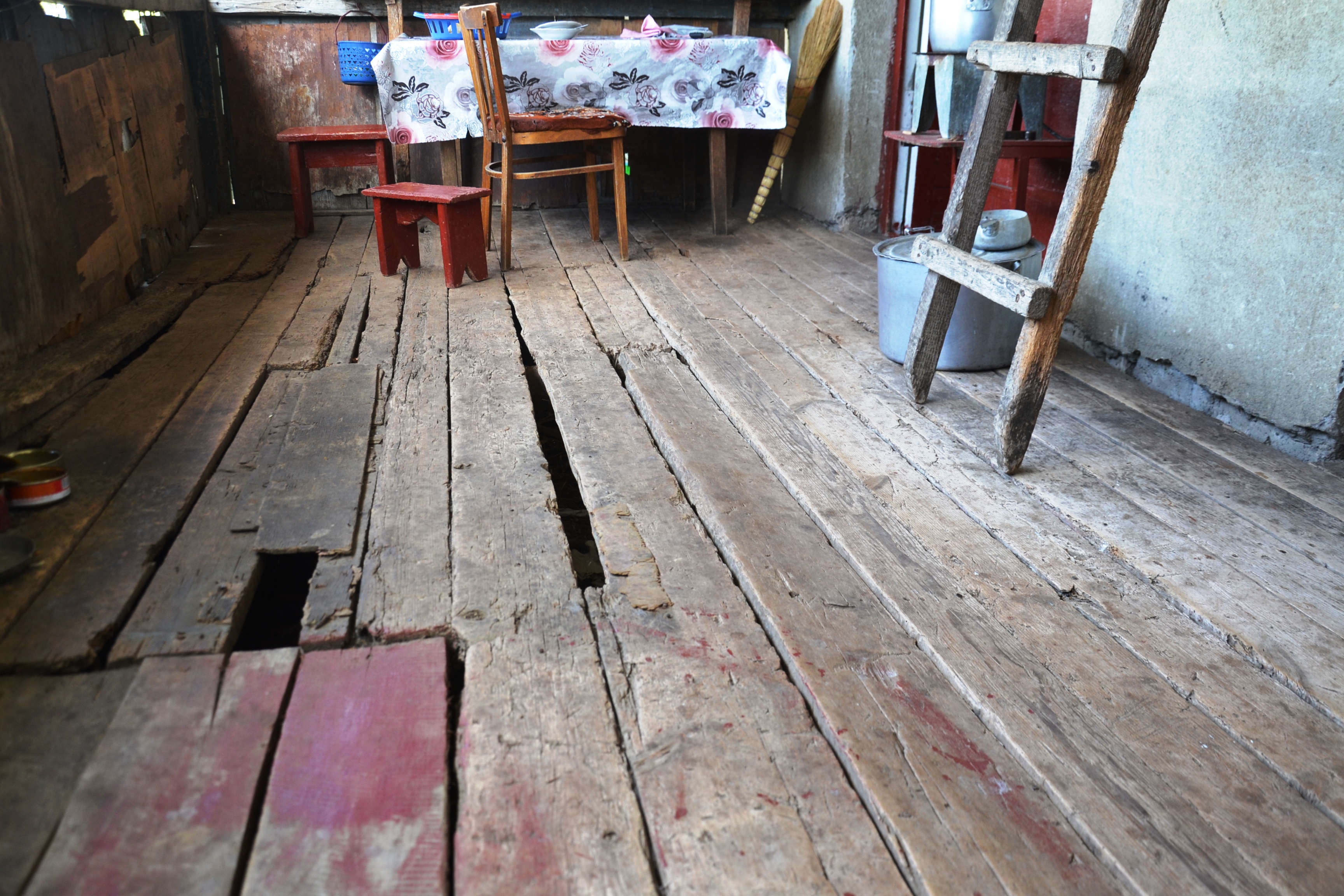 According to the Ministry of IDPs, there are a total of 8,730 IDP families living in 444 settlements throughout the Samegrelo - Zemo Svaneti region. Out of these, 1,906 families have been granted legal ownership of their living space. Detailed information is presented in the table below:

From 2013 until September 2015, a total of GEL 2,425,569.41 was spent on renovation and construction of IDP accommodation facilities through state budget appropriations. More specifically:

TI Georgia’s stance on IDP accommodation and access to livelihoods

Even though the Georgian government made significant progress in renovating IDP collective centers over the years, many issues remain due to the scale of the overall problem. Renovation works are often of low quality due to lack of oversight. Consequently, most collective centers are still in need of renovation.

A significant portion of the IDPs still live in harsh conditions. The process of their social and economic integration is slow and difficult. Most IDPs living in collecting centers are socially vulnerable.

In addition to improving IDP living conditions, the government needs to implement other activities outlined in the Strategy for Providing Access to Livelihoods for IDPs. The chief objective of the strategy is to provide IDPs with vital assistance, such as food and health care. In addition to providing long term accommodation and renovating collective centers, the strategy envisions the creation of conditions enabling IDPs to have access to essential livelihoods. Targeted projects need to be implemented for smaller target groups with specific needs.

The Georgian government must ensure that IDPs in all collective centers have access to livelihoods, and the necessary social and medical infrastructure (school, employment, health care, transport). Currently, many collective centers fall behind in this regard.