Public opinion on medication use and the prescription system

There are two main findings about the usage of medication and the prescription system from our nationally representative 2015 public opinion poll:

1. Approximately half the respondents reported that the changes to the prescription system negatively affected them and their families;

1. In connection to medicine, the public opinion poll provides us with the following picture:

1.3. Almost one in ten respondents said that after the changes to the prescription system, they had bought medications without prescriptions, while 68% stated that they had not done so.

1.4. In the opinion of 75% of those surveyed, after the changes to the prescription system, the cost of medications increased. The same share of those surveyed (75%) think that it has created unnecessary barriers to the purchase of medicine. 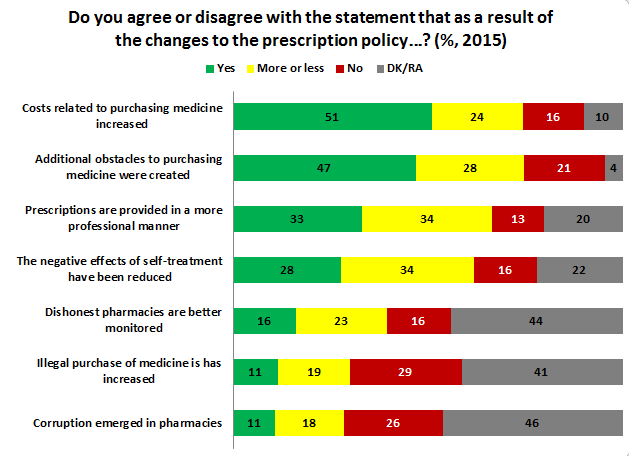 1.5. Monthly expenditures on medicines are still quite high: during the last month preceding the survey, 68% of respondents spent up to GEL 100 on medicine, 24% spent between GEL 100 and 500, and 2% spent more than GEL 500. In the month before the survey.

1.6. In the twelve months prior to the survey, the purchase of medicine occurred at the following frequencies:

[1]  The Georgian speaking adult population (18-85+) at the time of the 2013 presidential elections in the geographic areas covered by the survey was used as the sampling frame (3,185,586 persons) and not the country’s entire population. People under the age of 18 and people within specific geographic areas did not participate in the survey. From the 3,185,586 people within the sampling frame, we selected 1867 respondents in order to be as representative of demographic and geographic factors as possible.