Staff numbers swell at entities set up by Guria’s municipalities

Since the 2014 local self-governance elections, the number of staff employed at the non-profit (non-commercial) legal entities established by Guria municipalities has increased by 984, inflating the salary portion of their budgets by a total of GEL 370,000 each month and GEL 4.5 million annually on average.

Transparency International (TI) Georgia requested public information regarding the number of employees of the N(N)LEs founded by Guria municipalities in May 2014 and in October 2015, along with salary expenses for the respective periods.

The provided information has demonstrated: 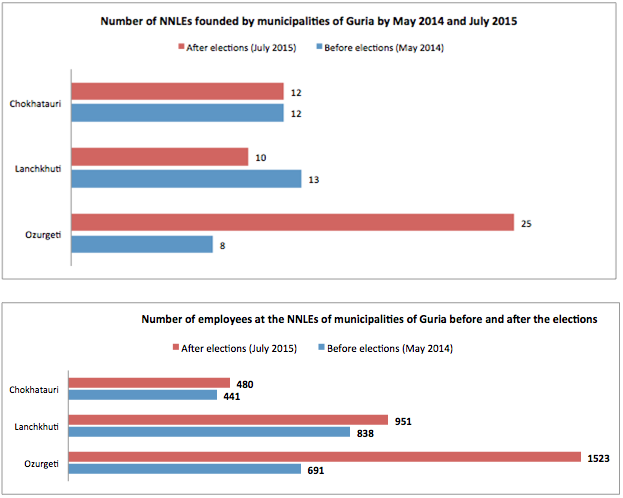 TI Georgia once again recommends that municipalities decide based on the local needs what type of organizations are necessary for effective functioning of the local government. Taking into account limited budgetary resources, they should mostly focus on saving administrative expenses and dealing with the essential needs of the citizens, utility and infrastructural projects.

It must be noted, that unlike appointment to a public office, employment at N(N)LEs does not require going a competitive merit based process. Thus, a head of N(N)LE personally makes staffing decisions, which does not allow for employment of persons with higher qualifications who would have been chosen through open competitions. At the same time, qualifications of individuals appointed without open contests are under question.

For improvement of the system of appointment of heads and staff of legal entities founded by a municipality, it is necessary that: