The June 20 rally on Rustaveli Avenue was dispersed through the use of disproportionate police force in response to violent acts carried out by a select group of demonstrators. The case is being investigated in two directions: the organization, management and involvement of the citizens in group violence, as well as allegations of excessive use of force by individual police officers.

Unfortunately, the steps taken by the state so far do not show a desire for a comprehensive and fair investigation of the case; moreover, the investigations are much more intensive in the case against the demonstrators, which shows signs of a selective approach. The steps taken by the state also do not respond to the sentiments felt within the society. According to a recent poll that was commissioned by the US National Democratic Institute (NDI), 43% responded that the government was responsible for the June 20 events; 68% believe that the authorities overreacted during the dispersal of the rally, while 71% think that  appropriate measures were taken against those who overreacted during the rally.

We present information about the state's approach to the law enforcement and demonstrators. The following examples and statistics illustrate the perception of a selective approach. In some cases, the actions of the investigative authorities may also be punitive and aimed at intimidating protesters in the future.

According to the information provided by the Ministry of Health, 202 civilians were injured in the demonstration, including 187 civilians and 15 journalists[1]. 24 civilians and 2 journalists required surgery, two people were placed on artificial ventilation, and two young persons reportedly lost sight due to the rubber bullets.

As a result of the events, 305 demonstrators were placed in administrative detention. In the overwhelming majority of these cases, the demonstrators were only detained on the basis of police testimony, proceedings were conducted in an accelerated manner, and the detainees were unable to fully exercise their rights. 19 civilians have been prosecuted, 16 of whom are still in custody. The prosecution's motions had a mostly template character and based only on general reasoning, but the court upheld them and sentenced the detainees to the most severe form of detention - imprisonment. The court sentenced one of the defendants, Levan Jikuri, who is the sole breadwinner of a socially deprived family and was brought to the trial in poor health, to imprisonment. According to media reports, detainee Besik Tamliani is also in poor health. On August 10, one of the detainees, Bezhan Lortkipanidze, was released from prison due to his deteriorating health conditions.

At the time of the dispersal of the rally, three law enforcement officers were charged with abuse of power, one of which was granted bail at the start of the trial, and two were later remanded in custody. One of them was released from custody on September 27 for pleading guilty and his deteriorating health. Eventually all three law enforcement officers were released and as of now, none of them are in prison. The Public Defender has questions about this fact and intends to study the cases in detail. 11 law enforcers have been temporarily suspended, including the Director of the Department of Special Tasks of the Ministry of Internal Affairs.

To date, the public has not received convincing answers and has not investigated the role of the head of the State Security Service and Bidzina Ivanishvili’s former security guard Anzor Chubinidze in the June 20 events. The media published footage of Anzor Chubinidze at the scene of the rally, where he allegedly was giving orders to the special forces. Although he was legally entitled to be present there, it must be investigated that his actions were beyond the scope of the powers conferred upon him by law.

It is also important to note that up to now the then-Minister of Internal Affairs, Giorgi Gakharia, has not taken political responsibility, which would be the only correct answer to the horrible results of the disproportionate police actions on the night of June 20. In contrast, the parliamentary majority on September 8 backed the promotion of Giorgi Gakharia to the post of Prime Minister, reiterating that the government has not reflected on the severity of the results of the dispersal and the significance of the crisis.

One of the leaders and lawmakers of the opposition National Movement - Nika Melia, as well as Irakli Okruashvili, the leader of the opposition party "Victorious Georgia", have also been accused of organizing, leading and participating in the group violence.

On June 25, 2019, the Prosecutor's Office indicted Nika Melia, an MP from the National Movement, while the Attorney General made a request to the Parliament to suspend Melia’s immunity. The Prosecutor General demanded the detention of a member of the parliament, which by procedure requires the parliament's approval. On June 26, the parliament voted to approve the decision and suspended the immunity, with 91 votes in favor. It should be noted that the prosecution's request had a template character and did not sufficiently substantiate why the most extreme form of preventive measure - detention, should be used against Melia. The template character of the document is also reflected  in the number of cases brought in support of the prosecution's arguments, most of which relate to circumstances so different that the reference to Nika Melia's case was absolutely irrelevant. There is no justification or explanation for the resolution adopted by Parliament either. Finally, the Tbilisi City Court imposed a bail for Nika Melia and other restrictions instead of detention.

Former Defense Minister Irakli Okruashvili was arrested on July 25. According to police officials, the politician, along with his companions, called on the protesters and himself attempted a violent intrusion into the parliament building. In addition, the investigation alleges that Irakli Okruashvili was involved in various acts of group violence. On July 27, the Tbilisi City Court granted the prosecutor's motion and sentenced Irakli Okruashvili to two months in prison.

As in the case of Nika Melia, the prosecution's motion was irrelevant in the case of Irakli Okruashvili. The request for detention was based solely on general reasoning. In the motion, the prosecutor's office pointed to the dangers of Irakli Okruashvili going into hiding and obstructing his administration of justice, destroying evidence and committing new crimes. The motion also stated that the prosecution's ruling based on the testimony of the witnesses, in addition to the video material distributed. It is noteworthy that all witnesses in the case at the time of the detention were police officers.

It is also noteworthy that a few days prior to the arrest and detention of Irakli Okruashvili was preceded in him critically accusing the government of owning Rustavi 2 TV and publicizing certain details against the ruling party.

Analysis of the current events suggests that steps the state has taken to date, instead of eliminating the systemic gaps, exemplify the desire for exemplary punishment for demonstrators and for a more selective approach by the state. The dispersal of the demonstration through disproportionate force by the law enforcement of the June 20 rally, severe human rights violations by the police in the process, among other problems, exposes serious systemic flaws and demands a prompt and fair response from the state. The lack of a fair response deepens public distrust towards the Ministry of the Interior and raises suspicions of its political influence.

In order to gain public trust in the Ministry of the Interior, it is important to identify and prosecute all law enforcement officers who committed the crime. We call on the investigating authorities to take the investigation with great responsibility, to pursue and complete this approach with maximum transparency and equality. 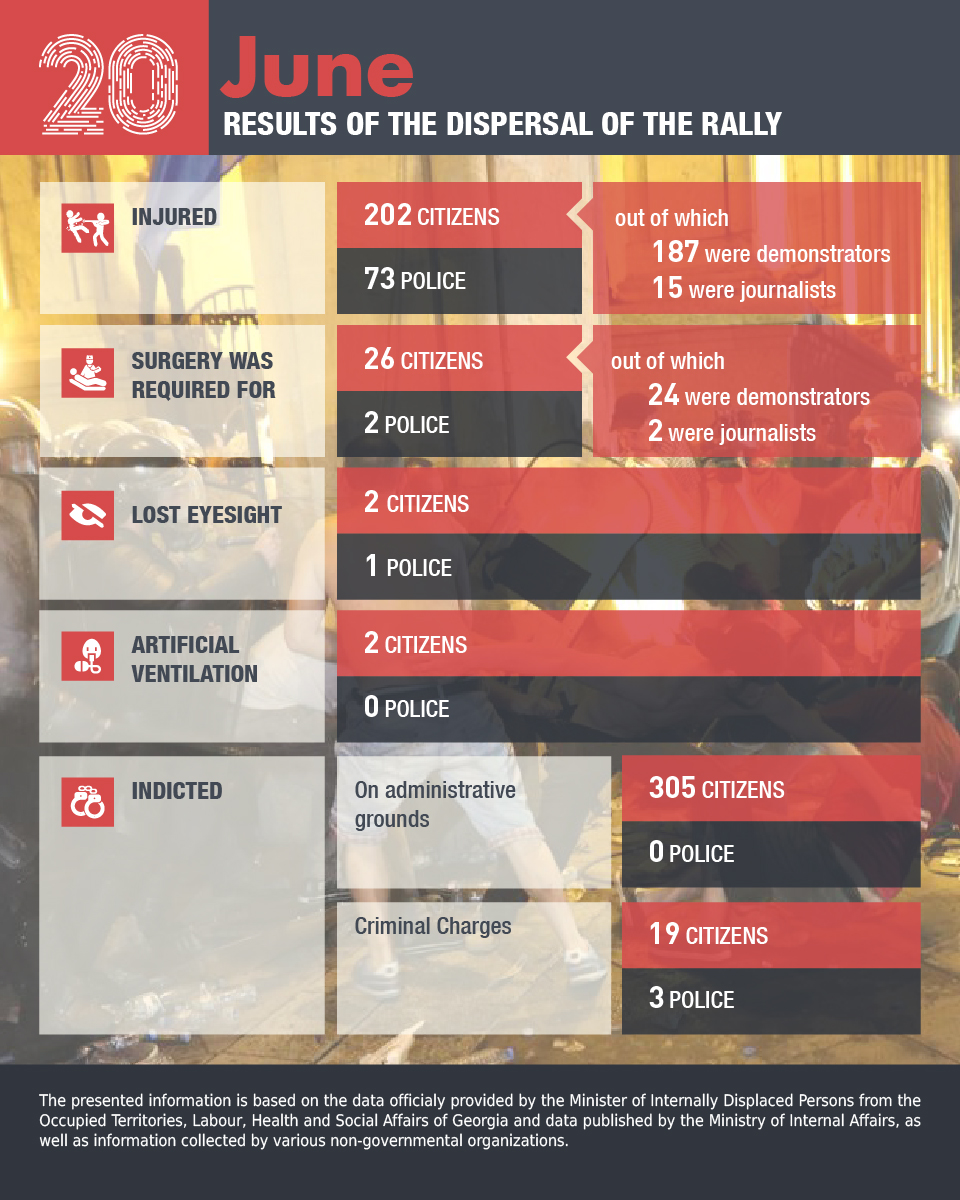