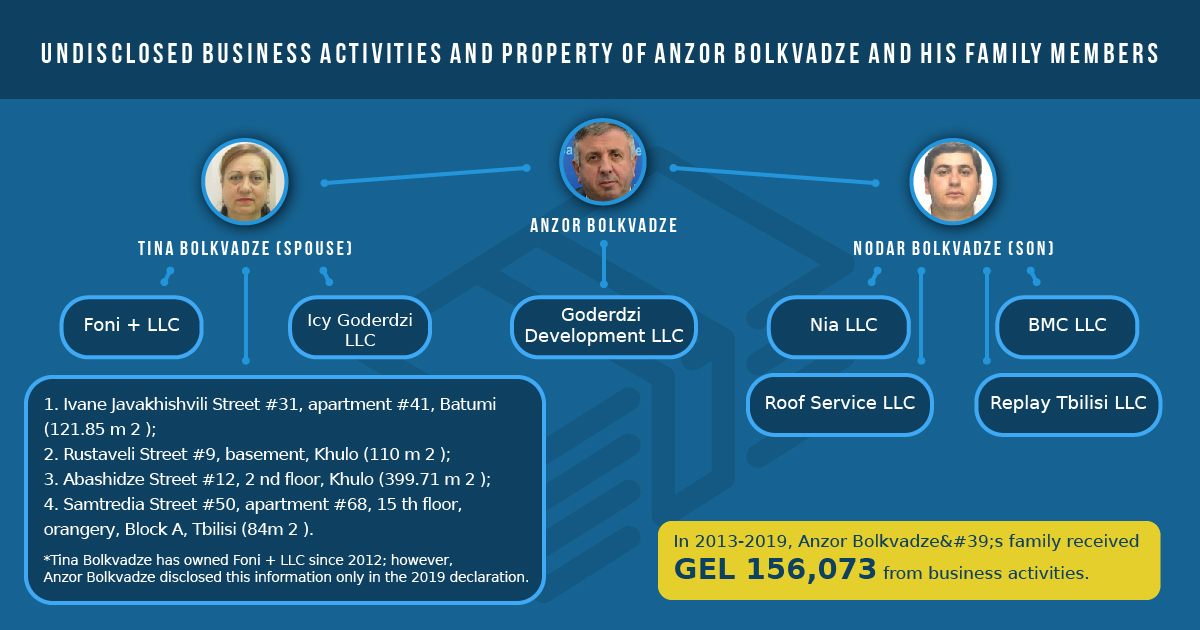 Transparency International Georgia continues to study public officials' asset declarations to identify possible violations. This time the organization studied the asset declaration of Anzor Bolkvadze, a majoritarian MP of Khulo, Shuakhevi and Keda, and property and business activities of his family members.

Anzor Bolkvadze has been a Member of Parliament for 12 years. He was a majoritarian MP from the United National Movement in the 2008 and 2012 convocations. On October 1, 2012, shortly after the change of government, he left the former ruling party. Bolkvadze ran again for majoritarian seat in the 2016 parliamentary elections, this time from the Georgian Dream.

An examination of Anzor Bolkvadze's asset declaration of 2019 and publicly available sources revealed that the majoritarian MP has not disclosed four family-owned properties and seven facts of participation in businessl activities. In addition, it was found out that Anzor Bolkvadze's family received GEL 156,073 from public procurements of Goderdzi Resorts LLC, the company owned by the Government of Adjara, and Khulo Municipality. Incomplete disclosure of property and entrepreneurial activity in an asset declaration is a misdemeanor.

The study revealed that Anzor Bolkvadze has had a 50% stake in Goderdzi Development LLC (ID Code 402064458) since 2017. The MP did not hand over the managing rights of his stake to another person, and this is a misdemeanor. The fact that the MP has not disclosed the mentioned business activity is another misdemeanor.

Together with Anzor Bolkvadze, Heliski Georgia LLC (ID code 402035409) is the co-owner of Goderdzi Development LLC. Heliski Georgia has received GEL 97,921.59 through simplified public procurement, in most cases the procurer was the LEPL Emergency Management Agency. The contracts envisaged the purchase of helicopter services owned by the company.

According to the asset declaration filled out on May 1, 2019 by Anzor Bolkvadze, his wife Tina Bolkvadze owns 100% of Foni + LLC (ID code 445411670). The MP's wife has owned this company since 2012; however, Anzor Bolkvadze disclosed this information only in the 2019 declaration.

Batumelebi - the magazine has found out that Foni + LLC owns Hotel Khulo, in which Caritas Czech Republic in Georgia rented office space as part of the Rural Development and Diversification Support Program in Khulo Municipality. The program is being implemented during 2017-2020. Giorgi Murvanidze, the Project Manager of ENPARD Khulo, confirmed to Transparency International Georgia renting of the hotel space owned by Anzor Bolkvadze's wife. It is unclear why Anzor Bolkvadze did not disclose his spouse's income from Foni + LLC in the asset declaration.

Since 2019, Tina Bolkvadze has also owned 33.3% of Icy Goderdzi LLC (ID code 448052473). Prior to that, Nodar Bolkvadze, Anzor Bolkvadze's son, owned that stake. This business activity has not been disclosed in any asset declaration filed by the MP. In 2017-2019, the company received public procurement contracts worth of GEL 136,028 from Goderdzi Resorts LLC, which is owned by the Autonomous Republic of Adjara.

Along with business activity, in his 2019 asset declaration, Anzor Bolkvadze did not disclose four real estate units of his wife, Tina Bolkvadze. She received two out of four units as a gift:

Transparency International Georgia calls on the Civil Service Bureau to take measures prescribed by the law in response to the study findings.

[1] Transparency International Georgia studies activities of any company by verifying the data available on the websites of Public Registry and the Public Procurement Agency. Therefore, the organization does not have any information whether Replay Tbilisi LLC has had any turnover during the 6 years before Anzor Bolkvadze filled out his declaration. According to the law, an official is not obliged to disclose the business activity of his or her family member in a company that has not had more than GEL 500 of turnover for six or more years before the filing date of an asset declaration.

Administrative Expenses of the Government of Adjara in 2018-2019