A number of restrictions are applied to public officials in Georgia regarding their business activities to avoid giving priority to their personal interests above the interests of the state and citizens.

Transparency International Georgia (TI Georgia) analyzed business interests and activities, and political donations of all 50 members, including 29 public officials, of the Tbilisi City Assembly of the 7th convocation and revealed several violations:

16 out of 29 members of the Tbilisi City Assembly from the ruling Georgian Dream party donated suspiciously identical amounts (GEL 5 or 10 thousand) to “Georgian Dream – Democratic Georgia” on the same day, 12 October 2021 (following the first round of the local self-government elections) – in a total of GEL 115,000. 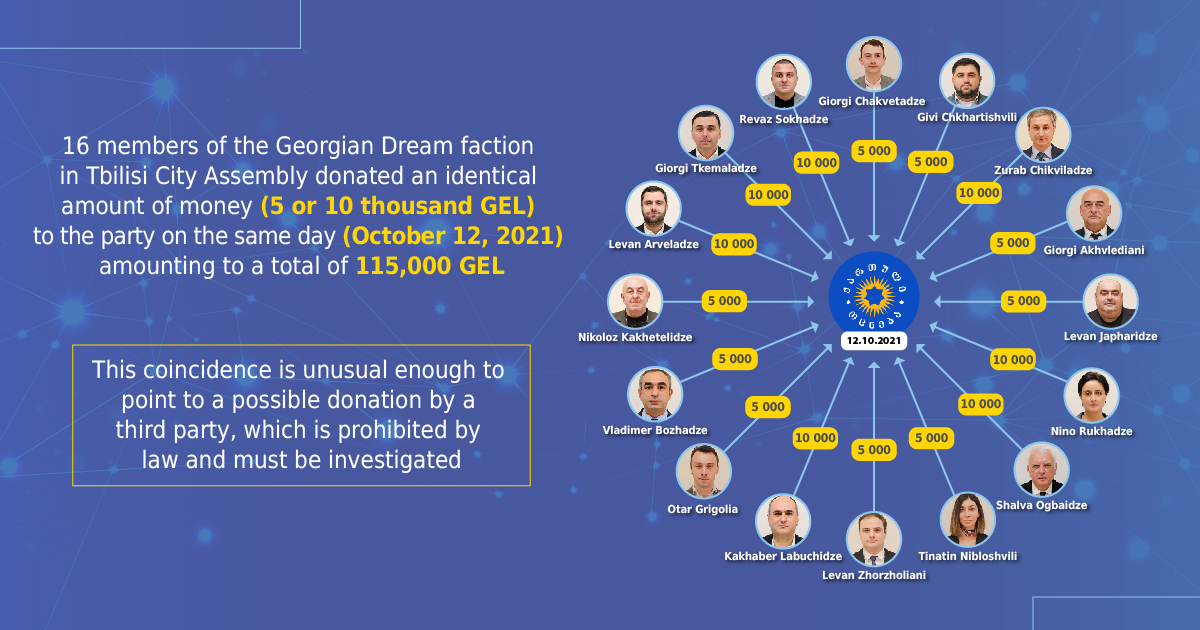 We believe that illegal political donations through third parties may have taken place.

On April 13, 2022, Transparency International Georgia urged the State Audit Office (SAO) to investigate alleged political corruption with regard to political party financing. On May 2, 2022, SAO replied that "the State Audit Office inspected the finances of individuals financing political union of citizens “Georgian Dream - Democratic Georgia” in 2021, and did not find any violation."

TI Georgia urges the Civil Service Bureau to review the violations found in the asset declarations of public officials below and respond in accordance with the law.

The business activities of the Tbilisi City Assembly members and their families look as follows:

Requirement for non-public official members of the Tbilisi City Assembly to disclose their business interests – The public should be aware of the business interests of every person elected to the local representative body, regardless of his/her position. For this purpose, it is advisable to introduce a simplified form of assets declarations for non-public official members, focusing on their and family members' business activities (disclosing connections with private sector companies), to strengthen the prevention of conflicts of interest at local government bodies.

Expanding the circle of family members to be declared - Research shows that it is necessary to declare all family members (parents, siblings, and adult children) and their interests as well. A very good illustration would be an example of Giorgi Akhvlediani and his son - Levan Akhvlediani, who is engaged in several business activities and is not included in the declaration, despite the fact that he is registered at the same residential address as his father.

The amendment made to the Law of Georgia on Conflict of Interest and Corruption in Public Service on December 30, 2021, shall be assessed positively. Based on this amendment, a deputy chairperson of the faction of a municipal Assembly shall be obliged to submit an asset declaration.