Five tenders announced by the Senaki City Hall in March 2022, whose total value amounts to GEL 2,614,550, were won without competition by JSC Arkeopolisi, a company owned by Demur Gadelia, the uncle of the Mayor of Senaki Vakhtang Gadelia, and Indiko LLC, a company of Ioseb Gadelia, the Mayor’s cousin. Vakhtang Gadelia previously also worked at Arkeopolisi. According to the information on the website of the Senaki City Hall, in 2009-2013, he was a member of the Supervisory Board of the joint stock company. 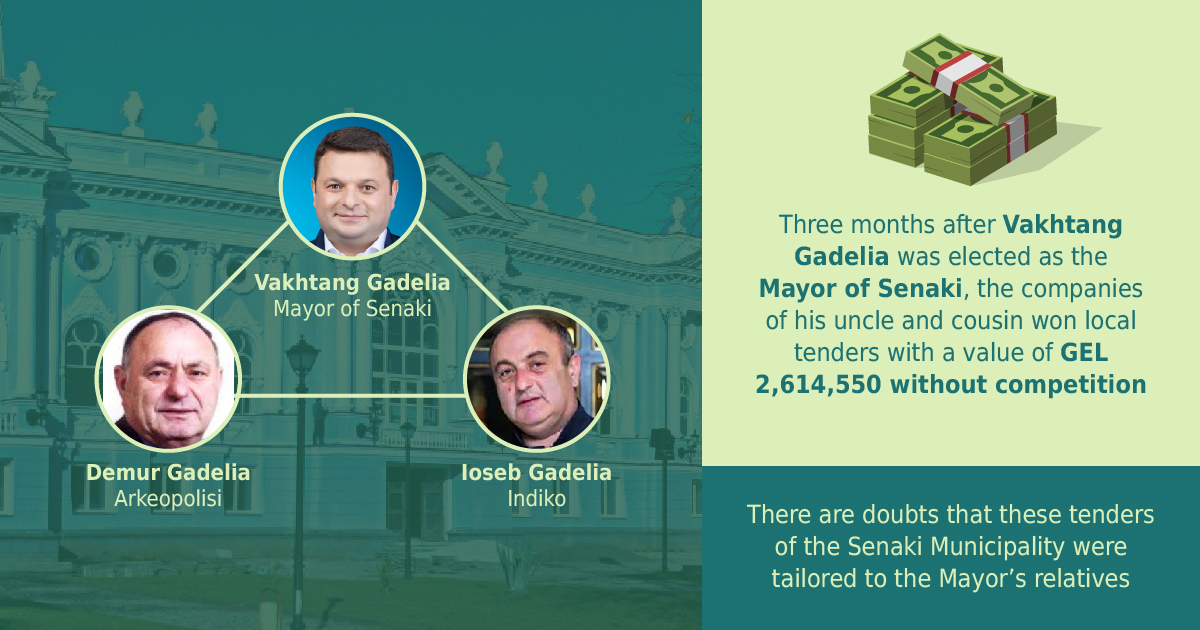 The examination of the tendering documentation and terms, as well as the process of the said procurements, makes us think that they may have been tailored to concrete suppliers.

JSC Arkeopolisi has won three tenders and is supposed to restore the road surface on two streets in the City of Senaki and in various neighborhoods of five villages, while Indiko LCC is the winner of two tenders – the company is supposed to perform the works of improvements of the yards of apartment buildings in the military settlement in Senaki, rehabilitation of internal roads, and arrangement of a sports pitch.

The Senaki City Hall first tried to procure the said services in January 2022, albeit by means of only two tenders:

The City Hall was not able to conclude contracts with JSC Arkeopolisi and Indiko LLC, because in both cases the value of the contract exceeded 5% of the budgetary payments of the Senaki Municipality, and signing a contract with such a value requires the consent of the City Council, while the Senaki City Council has yet to start functioning due to confrontation among parties. Accordingly, the tendering commission terminated both tenders.

Neither JSC Arkeopolisi nor Indiko LLC had any competitors in the terminated tenders, which was presumably caused by high financial requirements determined by the terms of the tenders – in one case (NAT220001182, participant – Indiko LLC), a procurement participant was to have an experience in the performance of the same type of works dating back to January 1, 2019, and the total value of the works was to be not less than GEL 7,877,300. And in the case of another tender (NAT220001185, participant – JSC Arkeopolisi), the value of the works performed was to be not less than GEL 12,367,700.

After terminating the previous two tenders, the Senaki City Hall announced six new tenders on March 25 and March 29. This time, the tender that was won by JSC Arkeopolisi was divided into three procurements; so was the tender won by Indiko LLC. By doing so, the City Hall reduced the value of the services, avoiding the need for obtaining the consent of the City Council for awarding the contract.

As in the previous two cases, in the new tenders the Senaki City Hall has also set quite high requirements of financial experience, which, in our opinion, has considerably restricted competition and other alternative suppliers active on the market, as it’s impossible for the majority of the companies active in Senaki and the region to meet these requirements.

The Head of the Administration Service of the Senaki City Hall, Nana Zarandia, is also connected with Arkeopolisi JSC – from 8 February 2019 to 12 June 2020, she was the Director of Arkeopolisi. Nana Zarandia is also the Deputy Chairperson of the Tendering Commission of the Senaki City Hall; as part of both the previous two terminated procurements and all the six new procurements, she has signed documents stating that she does not have a conflict of interest in relation to JSC Arkeopolisi and Indiko LLC.

Vakhtang Gadelia has stated in connection with all the five procurements that he does have a conflict of interest in relation to both Indiko LLC and JSC Arkeopolisi, and has delegated the authority to award the contracts to the First Deputy Mayor. However, in spite of this, the circumstances mentioned above raise doubts regarding the transparency of the process.

TI Georgia calls on the Anti-Corruption Agency of the State Security Service to study the process of participation of JSC Arkeopolisi and Indiko LLC in the tenders of the Senaki City Hall and to establish whether or not it contains possible signs of corruption.