Company with links to the Georgian Dream wins tenders in Imereti

Tenders in the municipalities of Zestaponi, Terjola, and Baghdati are won by Borani LLC, a company with links to the Georgian Dream, whose main activity is the arrangement, maintenance, and repairs of road surfaces. From 2013 to July 12, 2022, the company obtained tenders and simplified procurement contracts worth GEL 34,970,860.

Borani LLC and links to the Georgian Dream

The mother of Beka Arabidze, the acting director of Borani LLC, Nino Chkhikvadze, who used to own a 22% stake in the company, has links with the Georgian Dream. She now holds the position of the Deputy Chairperson of the Terjola City Council. Nino Chkhikvadze indicated in her asset declaration filled out in February 2022 that she, as a previous owner of a stake in Borani, as well as her son (the director of the company) and spouse (the deputy director of the company), had received an income of GEL 156,893 in total from the enterprise.

Today, Nino Chkhikvadze’s mother, Tamar Garibashvili, owns a 66% stake in the company. Before his death, this stake belonged to her spouse, Amiran Chkhikvadze, who in 1998 had founded Borani LLC together with his partners and served as its director until 2020. In 2017 and 2020, Amiran Chkhikvadze donated GEL 60,000 in total to the Georgian Dream. In the same period, owners of stakes of 10% and 16% in Borani LLC, Giorgi Abuladze and Melano Ukleba, donated a total of GEL 30,000 to the Georgian Dream.

The involvement of Borani LLC in public procurements

Borani LLC participates actively in public procurements: since 2013, the company has won 52 tenders with a total value of GEL 32,960,373, including 26 tenders without competition and 8 – at the expense of disqualification of competitors.

During the same period, the company also obtained 8 simplified procurement contracts, with the total value of the contracts amounting to GEL 2,010,487.

Out of the 52 tenders won by Borani LLC, 22 were announced by the Zestaponi Municipality, 15 – by the Terjola Municipality, and 3 – by the Baghdati Municipality. The company also won 12 tenders of the Roads Department, the majority of which were related to the maintenance and repairs of roads in the territory of Imereti. 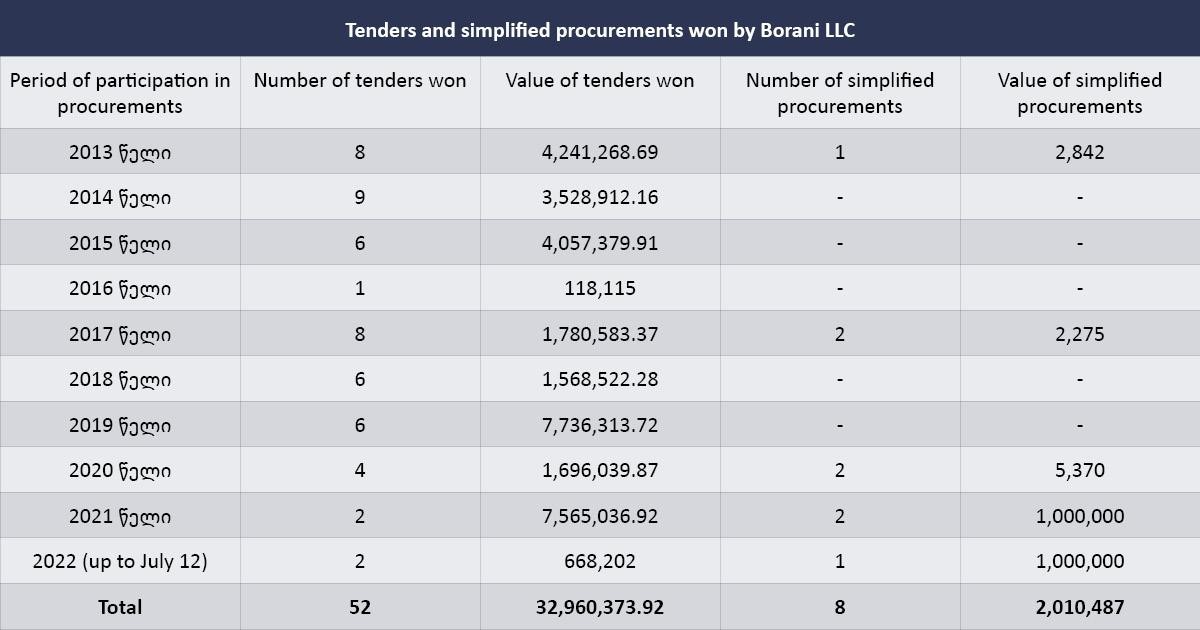 TI Georgia also wrote about the involvement of Borani LLC in procurements in its 2021 study that dealt with simplified procurement contracts concluded by the State with the construction sector at the time of the pandemic.

In the opinion of TI Georgia, the involvement of Borani LLC in the public procurements of the municipalities of Zestaponi, Terjola, and Baghdati raises doubts regarding the lawfulness of the process. Therefore, we call on the Anti-Corruption Agency of the State Security Service to study each procurement and establish whether or not they contain possible signs of corruption.