Tbilisi, 22 February 2018 –  Georgia is ranked 46th among 180 countries with the score of 56 points in the Corruption Perception Index (CPI) 2017 published by Berlin-based Transparency International Secretariat. Georgia ranks highest in the region of Eastern Europe (not including the members of the European Union) and Central Asia. 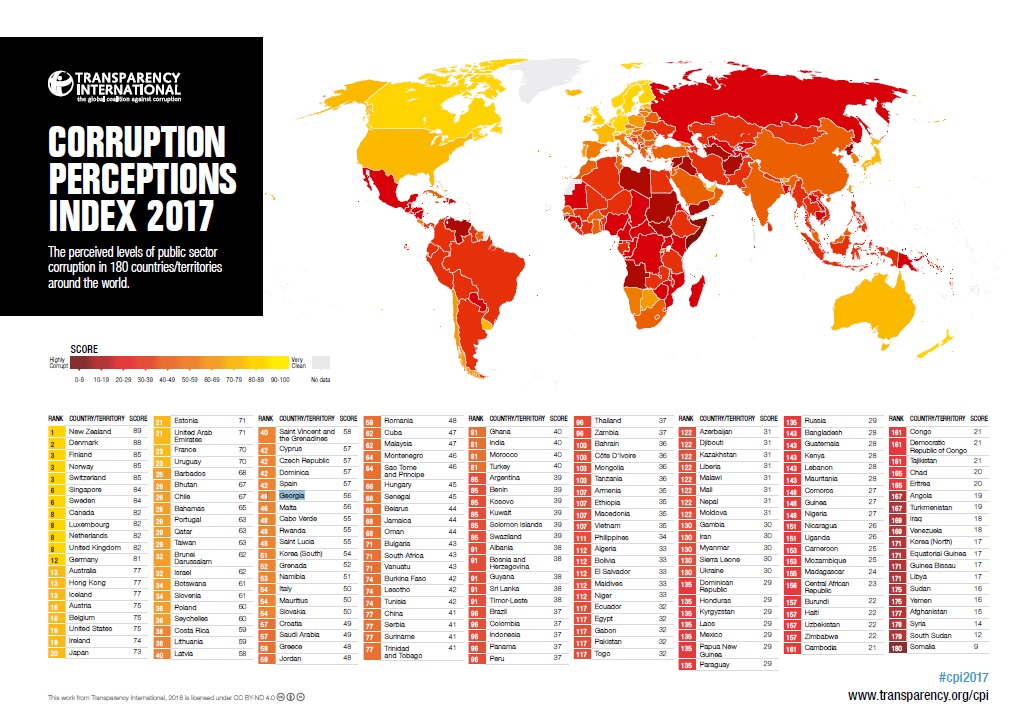 In the ranking, 100 points indicate the lowest level of perceived corruption while 0 – its highest level.

According to this year’s survey, Georgia’s ranking worsened compared to the previous year although (based on the survey methodology) a decrease of the score by one point is considered insignificant. The stability of Georgia’s position in CPI over the past several years (and its worsening in 2017) indicates that, after Georgia made a certain progress, its government needs step up its anti-corruption efforts.

The challenges with regard to Georgia’s anti-corruption policies are mainly related to the lack of accountability at the high levels of governance which, in turn, is the result of the absence of an effective system of checks and balances among the branches of power. Noteworthy are the challenges that exist with regard to the parliament exercising meaningful oversight over the executive branch, ineffectiveness of the judiciary and problems related to the independence of law enforcement/investigation agencies.

At the same time, the unanswered questions concerning possible corruption among active or former public officials in the past years cast doubts on the government’s readiness to combat high-level corruption.

The need to strengthen the role of independent agencies (State Audit Service, Procurement Agency and others) is also noteworthy. Despite the fact that some steps have been taken with regard to monitoring asset declarations of public officials, it is important that, like in the case of the Civil Service Bureau, the efficiency of other services which monitor budget spending and public procurement is also improved.

The challenges facing the judiciary have come to light in the recent period. Flawed legislation, inappropriate influence from inside or outside the system, the closed nature of the system, the lack of accountability and inefficient management in the judiciary pose a direct threat to the independence of judges and significantly increase corruption risks.

In order to address the prevailing challenges and to continue making progress in combating corruption, we believe that it is necessary:

Corruption Perception Index (CPI), published for the 25th time today, is based on expert opinions of the level of corruption in the public sector. Since 2012, the survey has been conducted using a new methodology which allows comparing the results from different years. CPI is prepared based on the research by reputable international organizations, each containing the assessment of the situation prevailing in various countries with regard to corruption.

According to CPI 2017, the level of perceived corruption is the lowest in New Zealand and Denmark (89 and 88 points) and the highest in Somalia (9 points), South Sudan (12 points) and Syria (14 points).