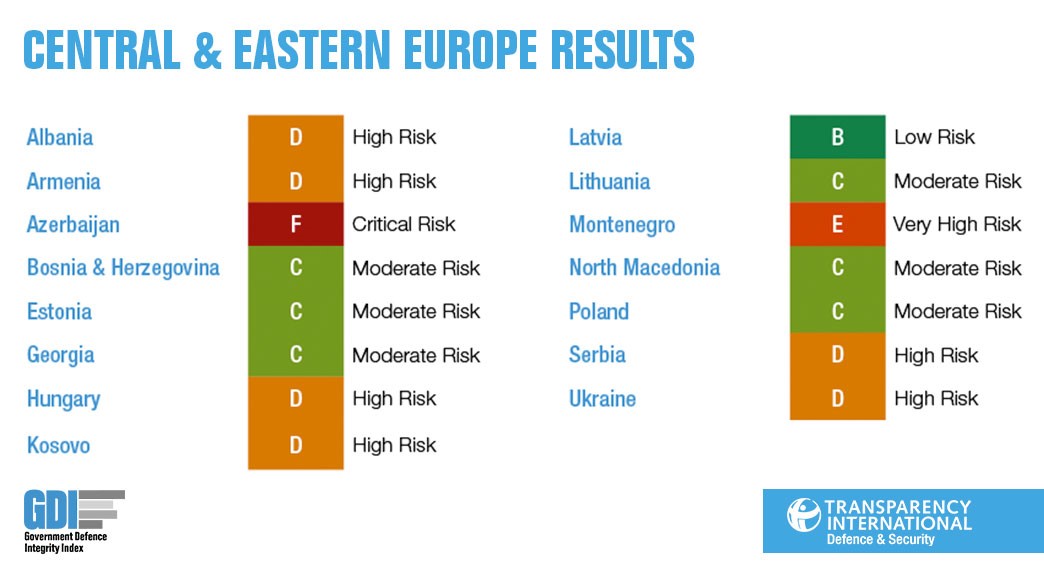 According to Government Defence Integrity (GDI) Index 2020 published by Transparency International – Defence & Security (TI-DS), Georgia has received a score of 60 out of a 100, placing it in the category of having moderate risk of corruption in the field of defense.

In the ranking, 100 points indicate the lowest risk of corruption, while 0 indicates the highest risk.

Georgia has an above-average overall score in the Central and Eastern European region (Georgia - 60, regional average - 48). Strengths include, for example, freedom of information in the field of defense, when the Ministry of Defense provides complete and, in most cases, timely information to the public.

However, the assessment revealed several areas of concern that make the country's defense system vulnerable to corruption. These include: weakness of anti-corruption mechanisms and parliamentary oversight, use of opaque public procurement procedures, and inadequate protection of whistleblowers.

According to TI-DS: “With the enhancement of the defence capabilities of the Georgian armed forces and the increase in investment and resources dedicated to the sector, it is essential for institutional mechanisms of oversight, accountability and transparency to be strengthened, to ensure funds are utilised properly and that corruption risks are properly mitigated.”

The authors of the study point to 5 main components in the case of Georgia, where there are shortcomings and improvements are needed to reduce the risk of corruption in the Georgian defense system:

Georgia still has no unified military doctrine that addresses corruption issues as a strategic threat on operations. As part of NATO and EU deployments, Georgia relies on partner forces to include corruption mitigation measures into operational planning, but fails to mainstream anti-corruption into strategic documents for military operations on the national level.

The Georgian Parliament has not been able to exercise strong oversight over the defense sector. For example, there is no recent evidence of the defence committee refusing to approve defence and security legislation presented by the executive. Most legislation is passed either without amendment or with only technical changes, raising doubts as to the quality and extent of parliament’s oversight.

Information about the defence budget is largely superficial and lacking consistent justifications and detail, with no breakdown by programmes. The Parliament has not enough access to a detailed breakdown of all defence expenditure.

Although the Ministry of Defence does have some internal mechanisms of disclosure, whistleblowers in the defence sector are not covered by whistleblower protection guarantees provided by Georgian law. Relevant special legislation, which was supposed to be drafted in 2015, has not been adopted to this day. This lack of protection guarantees reduces the chance that defence sector employees will report potential corruption violations from within the system.

In order to reduce the risks of corruption in its state defense system, Georgia needs to:

Address corruption as a strategic issue in the planning of military operations – According to the GDI 2020 analysis for Georgia: “As access to international organizations and contributions to multilateral military operations is a key pillar of Georgia's defense and security policy, it is essential that Georgia has robust governance and anti-corruption mechanisms and awareness built into its strategy, command and training for military operations.”

Increase the transparency of the defense budget – Parliament should be given greater access to detailed defense-related expenditures to enable stronger parliamentary oversight of the use of budget funds in the defense sector.

Reduce the use of closed procurement procedures – Given the fact that defence funding is gradually increasing in Georgia, it is necessary to make sure that as much of these funds as possible is spent through open and competitive procurement procedures in order to minimize corruption risks. In addition, even though there is no legal requirement to disclose information about subcontractors, the Ministry of Defense should nevertheless set this high standard of transparency that will help reduce the risks of corruption and conflict of interest.

Developed by Transparency International - Defence and Security, which is part of the global Transparency International movement, the GDI is designed to measure corruption risk in national defence sectors. It assesses the existence, effectiveness, and enforcement of institutional safeguards to corruption across five key risk areas: financial, operational, personnel, political, and procurement.

The GDI is the result of a robust research process, involving multiple peer review stages and reviews by governments themselves. It is based on a variety of evidence, including desk research and confidential interviews. The assessment is built around a set of 212 risk indicators.

GDI 2020 is the second iteration of this index. The first study was published in 2015, however, due to a change in methodology, direct comparison between the two studies is not possible.

The results of the index are published in several waves, according to the regions of the world. Three regions have been published at this time: Central and Eastern Europe, West and Central Africa, and the Middle East and North Africa. The results from other regions will be published in the spring of 2021, after which a global comparison will be possible.