Russian Businesses of Bidzina Ivanishvili and His Relatives

After the launch of a full-scale war against Ukraine by the Russian Federation and the imposition of unprecedented sanctions on Russia by the West, the Georgian ruling elite’s peculiar approach to dealing with Russia has become a topic of wider discussion. As many countries around the world have imposed significant economic and other restrictions on Russia, there is a growing risk that Russia will try to circumvent these restrictions by any means at its disposal. The Kremlin is likely to consider using neighboring countries, including Georgia, to achieve this goal.

After coming to power, the Georgian Dream ruling party did not hide the intention to assume the so-called policy of non-irritation towards Russia. Over the years, this approach, coupled with other specific policies, resulted in certain segments of the Georgian economy being heavily dependent on Russia. Transparency International Georgia (TI Georgia) has written about this trend and the necessity to reduce economic dependence on Russia on multiple occasions, which has become even more relevant today and is directly linked to the country's security.

In this context it is also necessary to determine what business interests the Georgian ruling elite holds in Russia, as this may impact their decisions on issues of strategic importance for Georgia. The article below presents specific facts about the business interests of the founder of the ruling party and the informal ruler of Georgia, Bidzina Ivanishvili and his relatives.

Upon entering politics in 2011, Bidzina Ivanishvili stated that he would sell all of his Russian-owned businesses to avoid unnecessary questions in Georgian society. While Ivanishvili did sell those assets that were directly in his name in Russia, TI Georgia found that he continued to own at least 10 Russian companies through offshore entities in 2012-2019, which further branched out into an even wider network of subsidiaries. As of today, Ivanishvili owns at least 1 company in Russia (Aqua-Space Ltd) through one of his offshore companies. In other words, Ivanishvili has, in fact, misled the public about his Russian assets.

Bidzina Ivanishvili's relatives also do business in Russia, with family members of former and current high-ranking Russian officials no less. These companies should also be considered part of Ivanishvili's broader business interests for reasons outlined below. While these connections have been previously reported in Georgian media (TV Pirveli, Formula), the news here is that one of the Russian business partners was recently sanctioned by the US.

More specifically, through a company called Geo Organics, Bidzina Ivanishvili’s brother Alexander Ivanishvili and cousin Ucha Mamatsashvili do business with a US-sanctioned former KGB general and Governor of St. Petersburg Georgy Poltavchenko, and also with former high ranking official of Volgograd Roland Kherianov, whose wife is a former member of the State Duma Anna Kovichko, author of the infamous propaganda video "Uncle Vova, We Are With You".

Ways through which Bidzina Ivanishvili owns businesses in Russia

1. Offshore companies - Bidzina Ivanishvili owns business in Russia through offshore companies. He uses a similar scheme in Georgia, where he owns several dozen companies in such a way that his name is not directly visible anywhere. At this point, we have been able to identify three offshore companies (Vanity Overseas Limited, Wellminstone S.A. and Wenigen Management Limited) that Ivanishvili has been using to hold businesses in Russia for years (see below for more information). However, this is only a small part of the whole picture, since among the current shareholders of Ivanishvili’s former Russian companies are more than 20 other offshore companies that took over Ivanishvili's shares after he announced his withdrawal from the Russian market. TI Georgia is currently studying these entities.

Another example is Kakha Kobiashvili, Bidzina Ivanishvili’s nephew, who has long been the official representative of Ivanishvili's offshore companies operating in Georgia. Considering the degree to which Ivanishvili trusts and involves his relatives in dealing with issues related to his assets, the businesses held by these people, for example in Russia, should be considered as part of Ivanishvili’s broader business interests. It is also hard to imagine that Ivanishvili’s relatives would be able to establish successful business relations with influential Russian politicians (who may also fulfill the role of the so-called ‘krisha’ or ‘a cover’) without Ivanishvili’s influence.

The fact that the people who used to manage Bidzina Ivanishvili's personal assets currently hold highest positions in Georgia's executive government only strengthens the suspicion that certain decisions of the Georgian government may be tailored to the interests of their former employer.

Since 2015, the General Director of the company is Olga Borovikova (Боровикова Ольга Анатольевна) who is also the director of the "Dolgovoe Agentstvo" (ООО Долговое Агентство) - a legal successor of Unicor (Уникор), founded by Bidzina Ivanishvili in order to manage his assets in Russia.

In parallel with Russia, Vanity Overseas Limited also owns a company in Georgia - Aqua Center Ltd, which has a name and business activities similar to its Russian counterpart. Aqua Center Ltd was founded in 2010 and is run by Bidzina Ivanishvili's nephew, Kakha Kobiashvili. Kakha Kobiashvili is the official representative of Bidzina Ivanishvili offshore companies that are operating in Georgia. 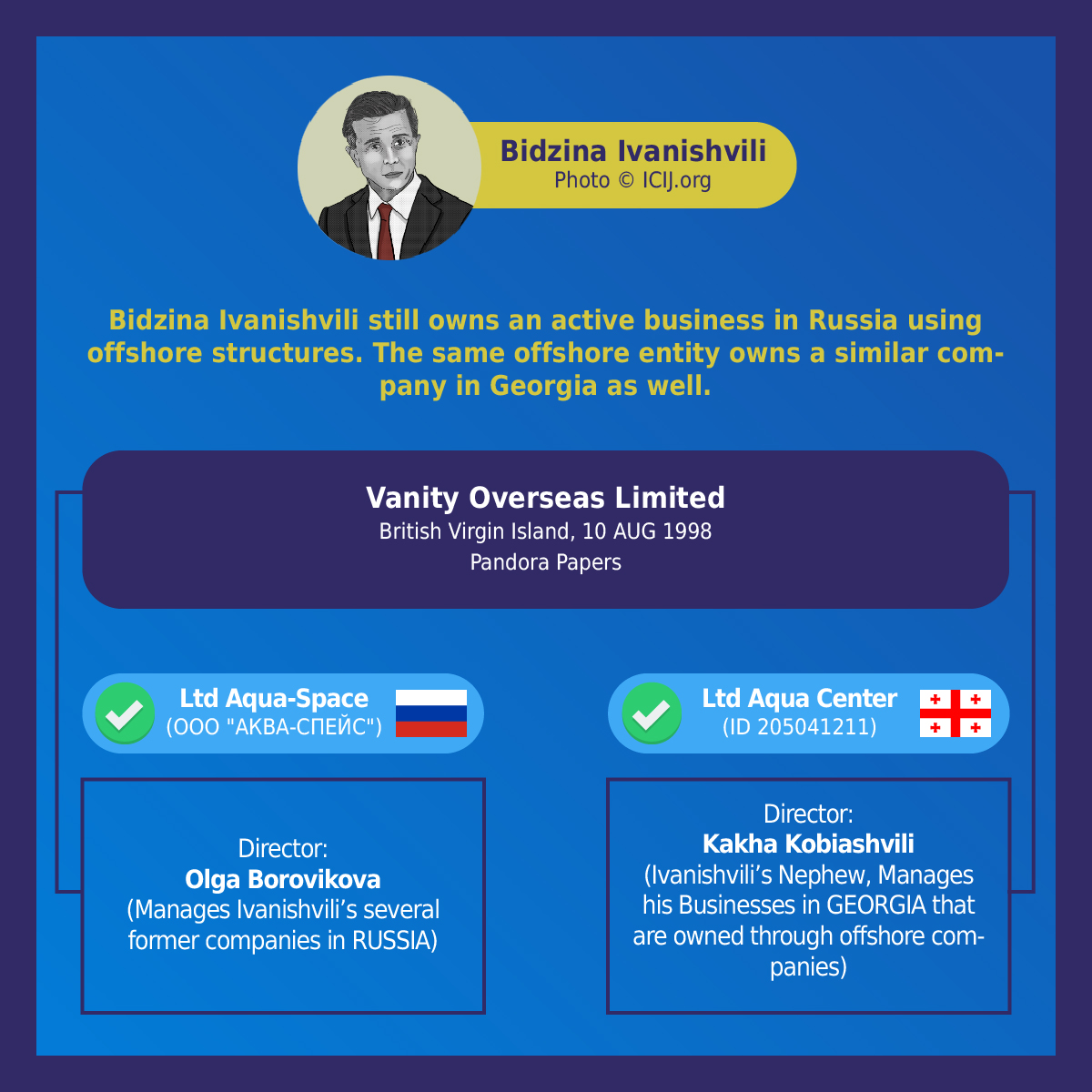 Bidzina Ivanishvili's linkage with Wellminstone S.A. (Beneficial Ownership) is confirmed by the Judgment of the Court of Appeal of the Republic of Singapore in 2020. Wellminstone S.A. has been the founder and shareholder of numerous companies in Russia since the 2000s. 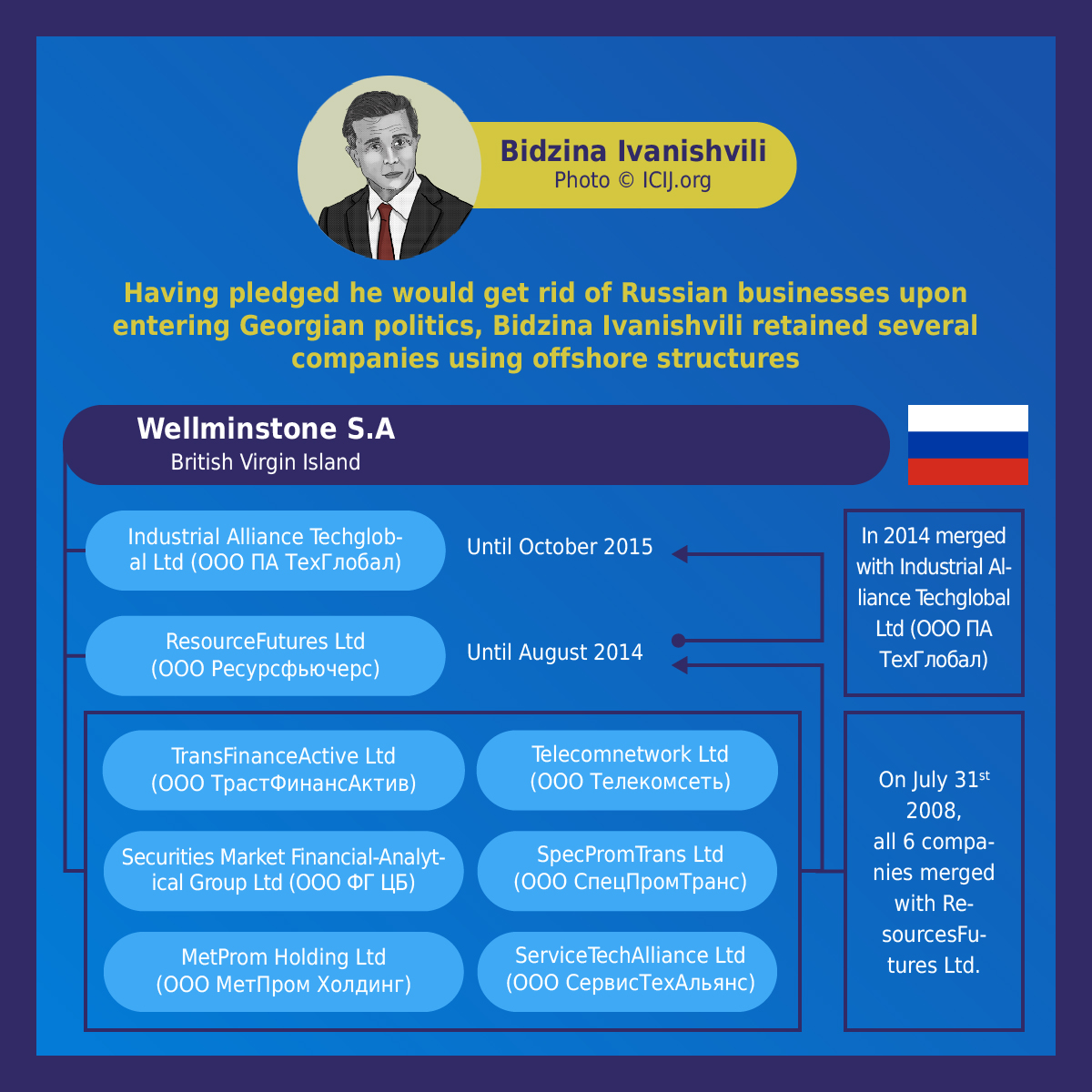 Bidzina Ivanishvili's one other offshore company Wenigen Management Limited also founded and owned many companies in Russia. Through this company Bidzina Ivanishvili was a direct shareholder of at least 4 companies during 2012-2019: Firm AVEK Ltd. (ООО Фирма АВЕК) - until June 2019, TERS Ltd. (ООО ТЕРС) - until November 2015, KMA-HoldingTrans Ltd. (ООО КМА-Холдингтранс) - until June 2015, and MK-Holding Ltd. (ООО МК-Холдинг) - until November 2013. In addition, Zhelezorudny Holding Ltd. (ООО Железорудный Холдинг) that was owned by the same offshore company, was merged with TERS Ltd. (ООО ТЕРС) in 2010.

The above-mentioned companies are connected to a wider network of sister companies, which in turn, is linked back to Wenigen Management Limited. These companies are currently being studied. 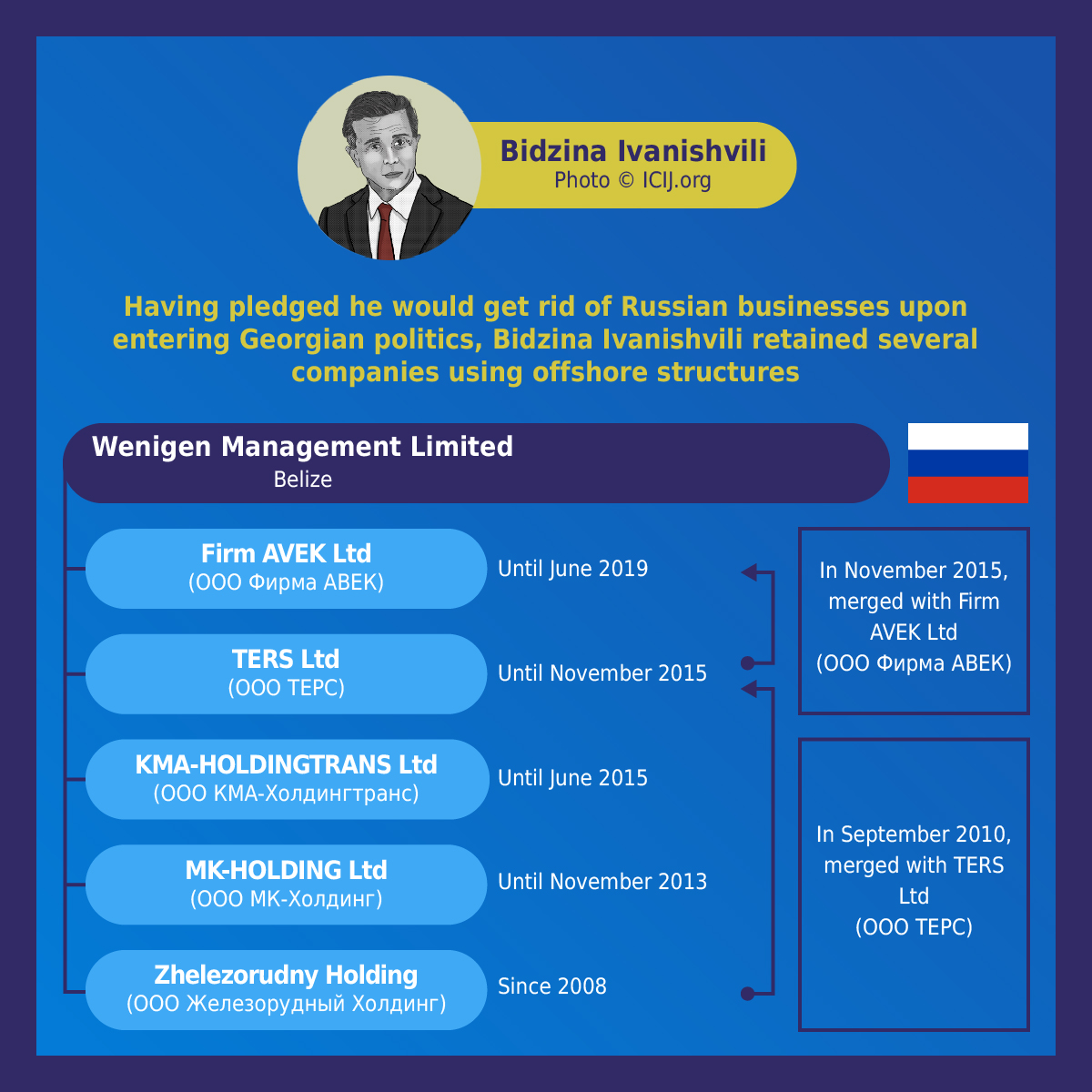 Bidzina Ivanishvili's relatives are also actively engaged in business activities in Russia, which was previously reported by the Georgian media. Both TV Pirveli and Formula conducted a journalistic investigation on this topic. Transparency International Georgia reviewed information obtained by investigative journalists. Below is a unified diagram and additional information on Russian business connections of Bidzina Ivanishvili's relatives.

Georgy Poltavchenko is a former governor of St. Petersburg (2011-2018), a former KGB general and a close associate of Vladimir Putin. In 2018, Putin appointed Poltavchenko as chair of the board of directors of the largest state-owned company JSC United Shipbuilding Corporation. The connection with Georgy Poltavchenko is problematic because he has been under US sanctions since April 7, 2022, while the United Shipbuilding Corporation has been sanctioned by the United States, the European Union, Switzerland, Canada, the United Kingdom, and Ukraine.

Ucha Mamatsashvili’s and Alexander Ivanishvili’s common business with the former Volgograd official Roland Kherianov and former Russian State Duma Member (2016-2021) Anna Kuvichko - Journalists of TV Pirveli and Formula also found business ties Ivanishvili's relatives have with Roland Kherianov, who used to hold the positions of acting mayor of Volgograd, member of the Volgograd Regional Duma and first deputy prime minister of the Volgograd regional government. In addition, TI Georgia found that his wife Anna Kuvichko was a member of the Russian State Duma from the ruling party in 2016-2021. Roland Kherianov was a shareholder in Geo Organics for the last 2 years of his wife's Duma term. At the end of 2017, Kuvichko's name became more widely known, when she sponsored a propaganda video titled "Uncle Vova, We Are With You" featuring young children and dedicated the song to Vladimir Putin. Anna Kuvichko was sanctioned by Ukraine since 2019 as a member of the Duma. Since 2016, Roland Kherianov has also been a member of the board of directors of the Russian pharmacy network 36.6. Erkapharm, the owner of 36.6, used to be part of Bidzina Ivanishvili's former company Unicor until 2012. This connection seems to suggest that Kherianov is a reliable partner for Ivanishvili, which further suggests that his abovementioned business connections with Ivanishvili’s relatives could not have been established independent of Ivanishvili.

The information presented here is only a small part of the full picture. TI Georgia continues to research Bidzina Ivanishvili's Russian companies and will publish other findings in the future.

Despite formally leaving politics, Bidzina Ivanishvili retains influence over Georgia's ruling party and a number of key institutions, which are still headed by people who had worked for his companies or directly for his family.

According to Transparency International, such influence on democratic institutions qualifies as state capture. Freedom House makes a similar assessment of the state of democracy in Georgia by stating that: "Oligarchic influence affects the country’s political affairs, policy decisions, and media environment, and the rule of law is undermined by politicization."

Against this background of obvious signs of state capture, when the informal ruler of the country is found to have serious business interests in a hostile state, the security of the country and its foreign policy course may come under threat.