In response to the dire economic situation in the country caused by the COVID-19 pandemic, the Government of Georgia (GoG) submitted draft amendments to the Law on the State Budget for 2020 to the Parliament on June 9, 2020. We present an analysis of this draft law and recommendations.

According to the draft amendments, the GoG forecasts a 4% economic decline this year. Prior to the spread of the COVID-19, the forecast for economic growth for this year was 4.5%. In 2020, the nominal Gross Domestic Product (GDP) will remain at the level of GEL 50 billion as 4% economic decline will be outweighed by 4.8% increase in price level (deflator). The World Bank predicts a 4.8% decline in Georgia's economy in 2020. In January-April, Georgia’s economy shrank by 3.6%, mainly due to a 16.6% decline in April.

After tax revenues, the second most important source of budget revenues will be government debt. This year, the GoG will borrow more than GEL 8 billion. This is the largest debt ever taken by the GoG in a single-year period. For example, in 2019, the GoG borrowed GEL 3 billion. 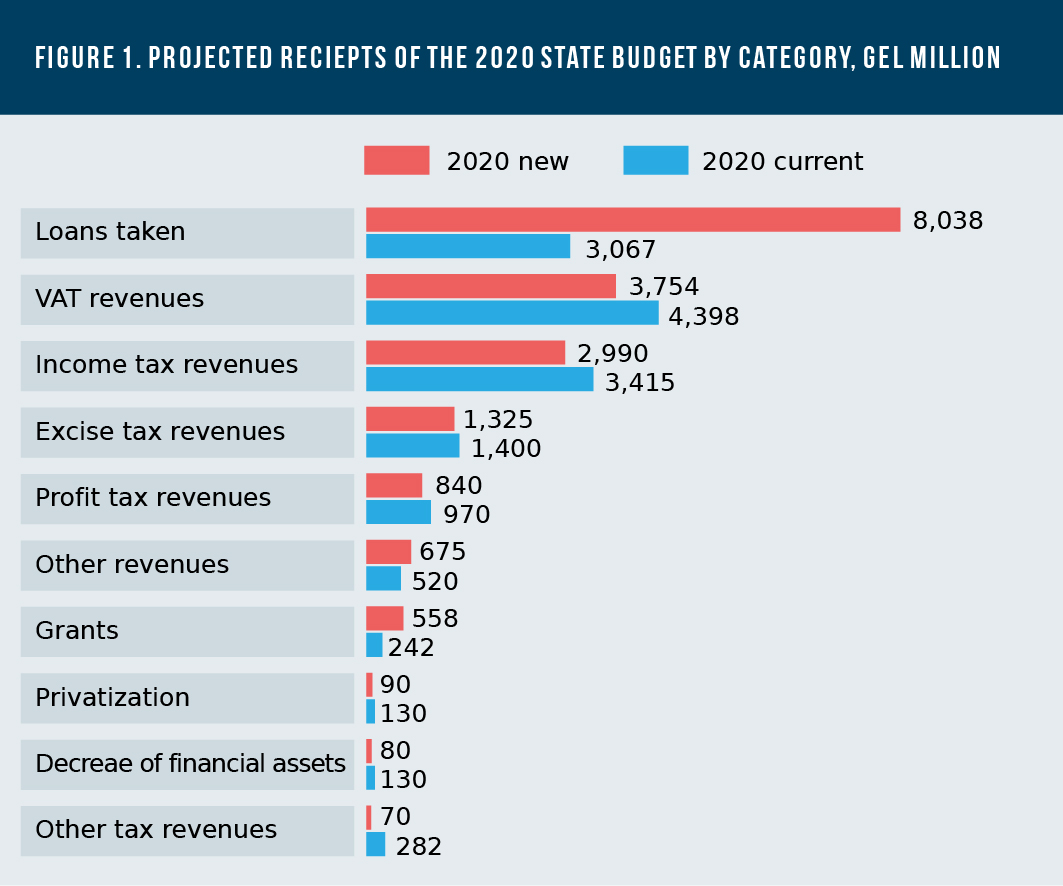 Due to the economic crisis and new tax breaks, the tax revenues will decrease by GEL 1.5 billion, compared to the current budget for 2020:

Compared to the current state budget for 2020, grants will increase by GEL 316 million in the new budget. The increase comes entirely from the additional EUR 330 million attracted from the EU. Investment grants increase by GEL 1 million, while budget contributions (classified as grants) from LEPLs will decrease by GEL 15 million.

Other budget revenues will increase by GEL 155 million and reach GEL 675 million. The increase is mainly due to the reflection of GEL 133.5 million in the state budget mobilized through the StopCoV fund3. It is the right decision to include StopCoV fund donations in the budget, because the same standards of transparency and accountability will apply for the spending of this money as we have for budget expenditures. Other revenues will also increase due to the GEL 54 million that will be obtained from the interest on deposits placed as a result of additional funding.

3.    Expenditures of the State Budget4

As a result of the amendments, the Current Budget Expenses will increase by GEL 1.7 billion, of which the largest part – GEL 1 billion - will be directed to social expenses. In 2020, a total of GEL 5.3 billion will be spent in this direction.

The following public institutions made savings from the current budget:

The Ministry of Education, Science, Culture and Sports will save GEL 53 million from sports funding programs, GEL 21 million - from culture funding, GEL 20 million - from general education reform and students transportation, GEL 18 million-  from infrastructure development, and GEL 9 million - from higher and vocational education.

The Ministry of Defense will save GEL 15 million from current expenses, and GEL 60 million - from capital expenses, such as infrastructure development and purchase of military products including the anti-missile defense systems from France.

According to the explanatory note of the draft law, the pandemic will increase expenses on goods and services by GEL 195 million, out of which GEL 44 million will be spent on quarantine space services, and GEL 151 million will be added to other health care expenses (tests, personal protection equipment, etc.).

Additional costs incurred as a result of the pandemic

As a result of the amendments to the state budget, the cost of social security will increase the most - by GEL 793 million. The largest part - GEL 525 million - of these funds will be spent on unemployment assistance. GEL 170 million will be allocated for subsidizing utility costs, and an additional GEL 61 million - for the socially vulnerable population. Assistance to people with special needs will rise by GEL 24 million.

As a result of the amendments to the state budget, an additional GEL 20 million will be allocated for the purchase of IDP homes.

Funding of the Ministry of Healthcare will increase by a total of GEL 1,154 million.

Due to the fact that the revenues of the autonomous republics and municipalities will be reduced this year, the total amount of transfers from the state budget will increase by GEL 85 million. 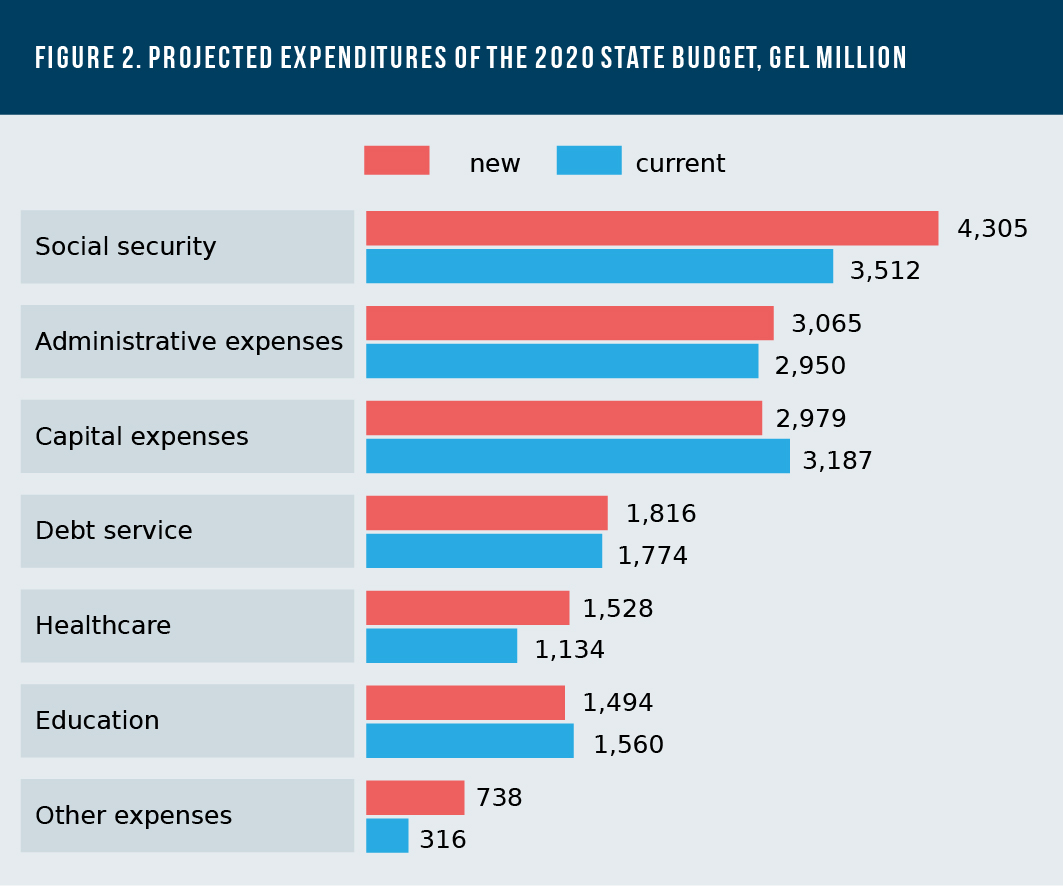 The GoG planned to increase the budget deficit and public debt for 2020 from the very beginning (at the end of 2019). In fact, that budget was partly motivated by 2020 parliamentary elections and Transparency International Georgia wrote about that in October last year.6 The GoG planned to take the record-high public debt of GEL 3 billion, in 2020, making the country’s fiscal system more vulnerable to the sudden economic crisis caused by such factors as a pandemic.

According to the proposed draft law, the operating balance7 of the 2020 state budget is planned at the level of GEL 2.3 billion, while in the current budget for 2020 this number is only GEL 380 million. A significant deterioration in the operating balance was due to a decrease in tax revenues and an increase in costs. Negative operating balance is not desirable for sustainable long-term economic growth and can only be used to mitigate short-term losses cause by COVID-19.

The deterioration of the operating balance will lead to the worsening of the total budget balance.8 In 2020, the negative total balance of the budget will be GEL 4.3 billion, while in the current budget it is planned to be GEL 1.2 billion. The total negative balance of the budget will be 8.4% of the GDP projected for 2020. In the current budget, the similar figure is 3.2% of GDP. As for the 2019 budget, it stood at 2.9% of GDP.

Since the balance of the consolidated budget is higher than 3% of GDP, the GoG is obliged to submit to the parliament a plan on how to return to the parameters defined by the law. The duration of the return plan should not exceed 3 years. The plan is presented in the basic economic and financial indicators document, according to which, the deficit of the consolidated budget will be 4.8% of GDP in 2021, 4% - in 2022, and 3% - in 2023. 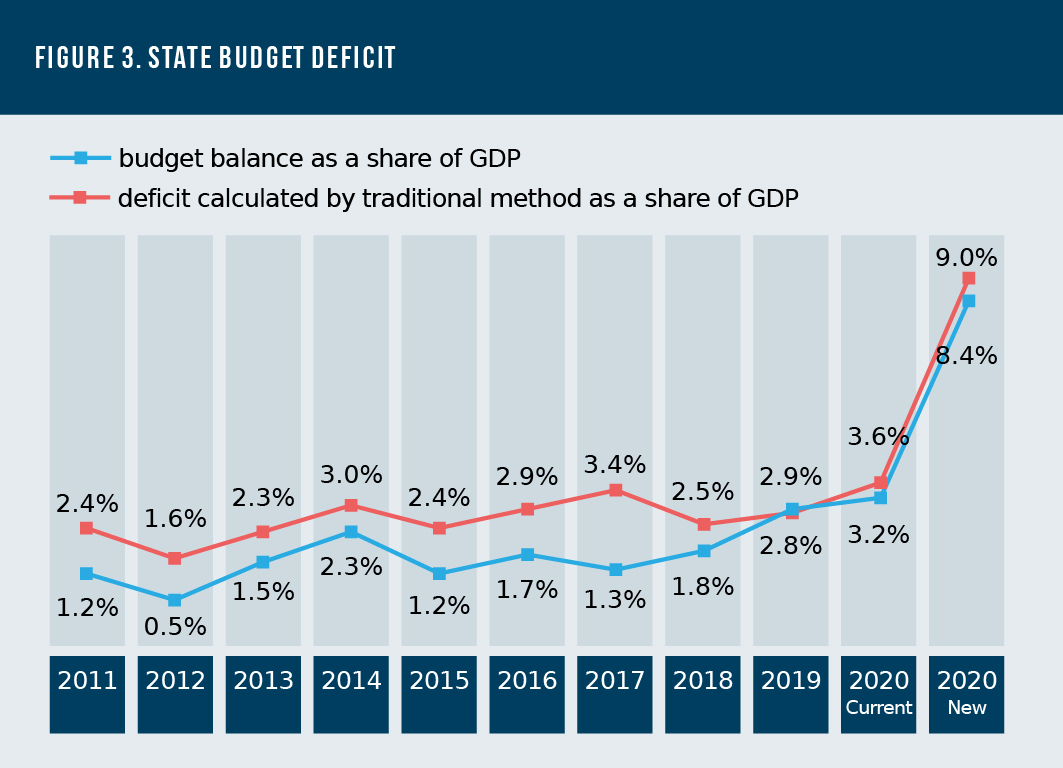 *Projected indicators are given for 2020

In 2020, the GoG will borrow more than GEL 8 billion, but at the same time will cover the previously taken debt of GEL 1 billion. As a result, government debt will increase by GEL 7 billion, of which GEL 1.8 billion will be domestic debt and GEL 5.2 billion will be foreign debt. The current budget envisaged taking the debt of GEL 2 billion. 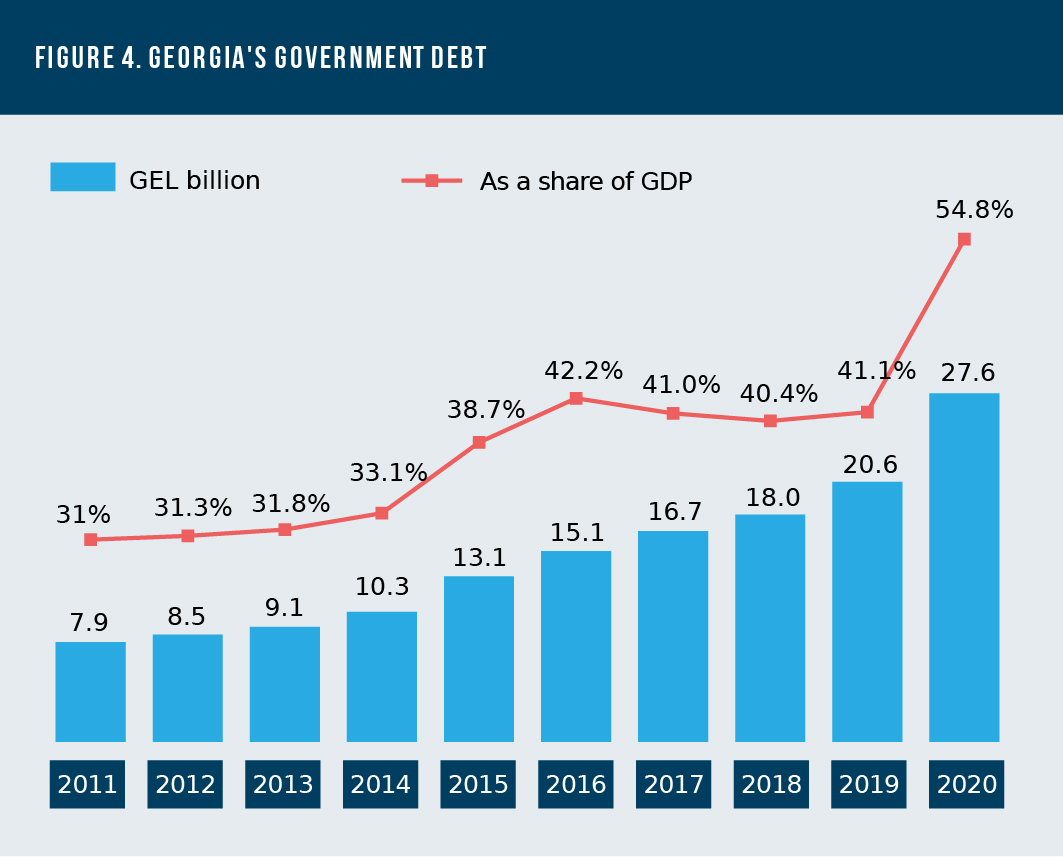 *Projected indicators are given for 2020

Up to 77% of the Georgian government debt is foreign debt. Therefore, if GEL depreciates the foreign debt expressed in GEL and its ratio to GDP will increase. For instance, due to the depreciation of GEL, in January-April 2020, the government's foreign debt increased by GEL 1.9 billion.

Out of the GEL 7 billion borrowed in 2020, the GoG will not spend GEL 2.5 billion this year. The mentioned amount will be transferred to the budget remainder.

The GoG plans to invest GEL 600 million, taken from the additional domestic debt, in the deposit certificates of commercial banks, the purpose of which is to create long-term liquidity of GEL for them. The interest rate on the domestic debt will be higher than the GoG will receive from deposits. This means that the GoG subsidizes commercial banks. At the same time, the GoG fulfills the function of the National Bank - to provide liquidity to commercial banks.

While government debt is rising to 54.8% of GDP and the country’s fiscal system is becoming more vulnerable to future economic shocks, the GoG should refrain from taking additional GEL 600 million in domestic debt to subsidize commercial banks. Moreover, due to the instability of the GEL exchange rate, the government debt to GDP ratio may exceed 60% (which is the maximum debt ration allowed by the Law on Economic Freedom) by the end of the year. The government debt to GDP ratio of 54.8% is calculated at the GEL/USD exchange rate of 2.98. There is a risk of exceeding the ceiling of 60% of GDP even if the economy shrinks by more than projected 4%. 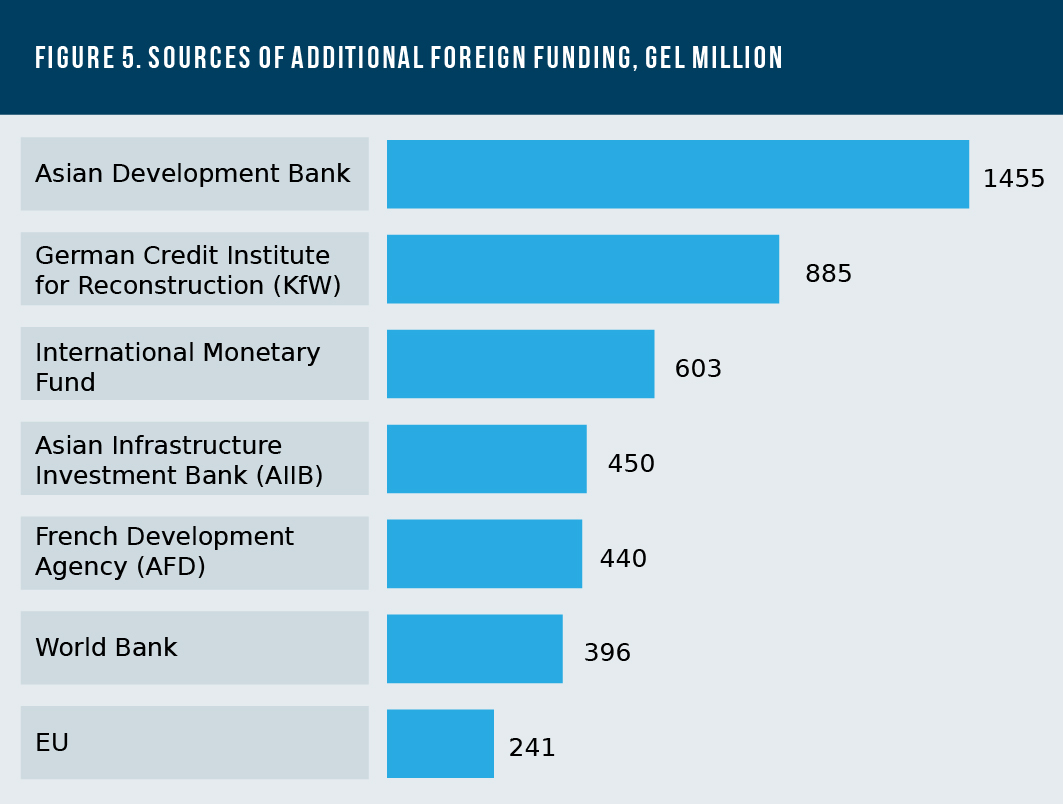 The GoG will spend part of the taken foreign debt in 2021, another part may also be used this year if the second wave of the COVID-19 starts and the economy is somewhat locked again. At the same time, foreign debt will serve other purposes apart from financing the budget deficit. Due to the decline in tourism, exports and remittances, Georgia will lose up to USD 3 billion in revenues from foreign sources, which, in addition to the shrunk economy, would put a lot of pressure on the GEL exchange rate. The increase in foreign grants and debt, coming in foreign currency, will play a significant role in stabilizing the GEL exchange rate.

1 Receipts are the sum of revenue, disposal of non-financial and financial assets, and newly taken loans. It includes all funds that go to the budget while the revenue includes only tax revenues, grants and other specific sources of income.

4 Expenditures are the sum of expenses, increase of non-financial and financial assets and repayments of previously taken loans. It includes any funds that go out of the budget, while the expenses include only funds spent for specific purposes, such as administrative, social, education, etc.

7 Operating balance is the difference between budget revenues and expenses

9 The consolidated budget is the sum of state, autonomous republican and local self-government budgets.

10 Since the total budget balance does not fully cover all budget revenues and expenditures, in the traditional sense, the budget deficit means how much the budget has been reduced by using new debt and budget remainder.