Contracts for 674 government procurements, including 665 direct contracts, were signed with three companies owned by the sons, brother and uncle of Enzel Mkoyan, who is the Majoritarian MP from Akhalkalaki and Ninotsminda. The companies received 2 312 278 GEL from the budget. Enzel Mkoyan purchases fuel for his bureau only from his family-owned company; the bureau has transferred 78 339 GEL to the company through 34 direct contracts over the course of four years. The MP signed contracts amounting to 49 000 GEL directly with the company’s director – who is his own uncle.

Enzel Mkoyan has been a Member of the Parliament for 20 years. He has served as the Majoritarian MP for Ninotsminda from different political parties on four separate occasions. For the fifth time, he was elected as a representative of the Georgian Dream in the Akhalkalaki-Ninotsminda Majoritarian District. 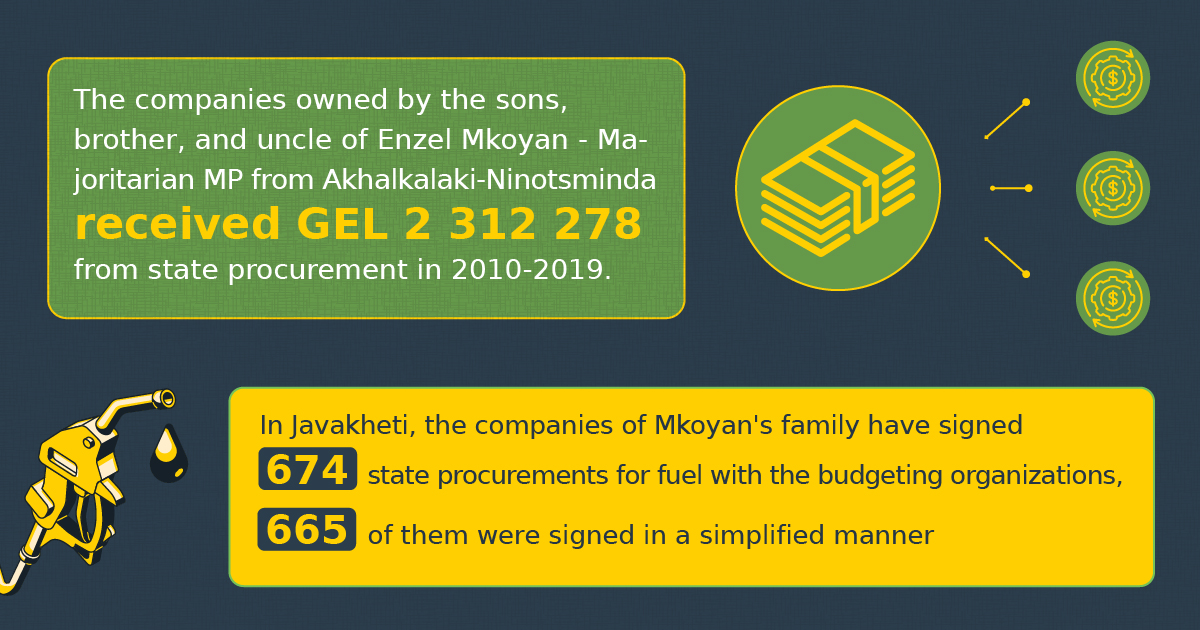 Companies belonging to the Mkoyans

Enzel Mkoyan was elected to Parliament on November 20, 1999. Within exactly one month, on 21 December, his brother Martun Mkoyan and his uncle, Norair Mkoyan, founded LLC Meeki. Enzel Mkoyan’s son, David Mkoyan, was appointed as the Deputy Director in January 2018. In June 2019, David Mkoyan, the MP's son, became a 25% shareholder in the company. Norain Mkoyan has been the director of the LLC for a number of years. From 2009 to 2016, on different occasions, for a combined period of two years, the company was headed by Gaioz Lomsadze. In November 2017, Lomsadze became a member of the Akhalkalaki Sakrebulo through the Georgian Dream party list and became the deputy chairperson of the Sakrebulo.

On May 6, 2008, the Mkoyans founded another company – LLC SG GAS – with Russian citizen and businessman Aram Sanosyan for the purposes of distributing fuel products. The Director and owner of 60% of shares in this company is Aram Sanosyan, another 20% belongs to his company Satakha, and the remaining 20% belongs to LLC Meeki.

Two years later, Enzel Mkoyan brought his eldest son, Karapet Mkoyan, into the fuel business. On April 26, 2010, he founded the LLC Akhalgazi in Akhalkalaki. Back then, he shared 50% of the company with LLC Georgian International Energy Corporation, while today LLC Neogazi holds the same amount of shares.

Mkoyan’s companies have more procurement contracts with the Ninotsminda City Hall and its LLCs/N(N)LEs than with Akhalkalaki. For example, from 2012 till the present day, the Akhalkalaki City Hall has signed only 2 out of its 28 fuel procurement contracts with Meeki for a total of 9 400 GEL. (Its main suppliers are Rompetrol Georgia and Lukoil Georgia).

The Ninotsminda City Hall has signed procurements contracts with Mkoyan’s companies in 58 out of 61 cases of procurement. Amongst these were 2 tenders and 56 direct procurements. The only bidder in both tenders was Meeki and it won a total of 181 000 GEL. Out of the 56 simplified procurements, 52 were signed with Meeki and 4 with the SGM Gas Company. The purchaser in the other three cases was LLC Lukoil Georgia. Therefore, Mkoyan companies received 513 315 GEL out of the 668 515 GEL spent on fuel by the Ninotsminda City Hall. Meeki received 383 080 GEL, while SGM Gas Company received 130 235 GEL.

In Javakheti, if the municipal bodies do not buy firewood, then the contracts are signed through direct procurement, often only with Meeki, or with SG Gas Company. (This SG Gas Company also carries out the design, construction and repair work for the gasification in Javakheti.) 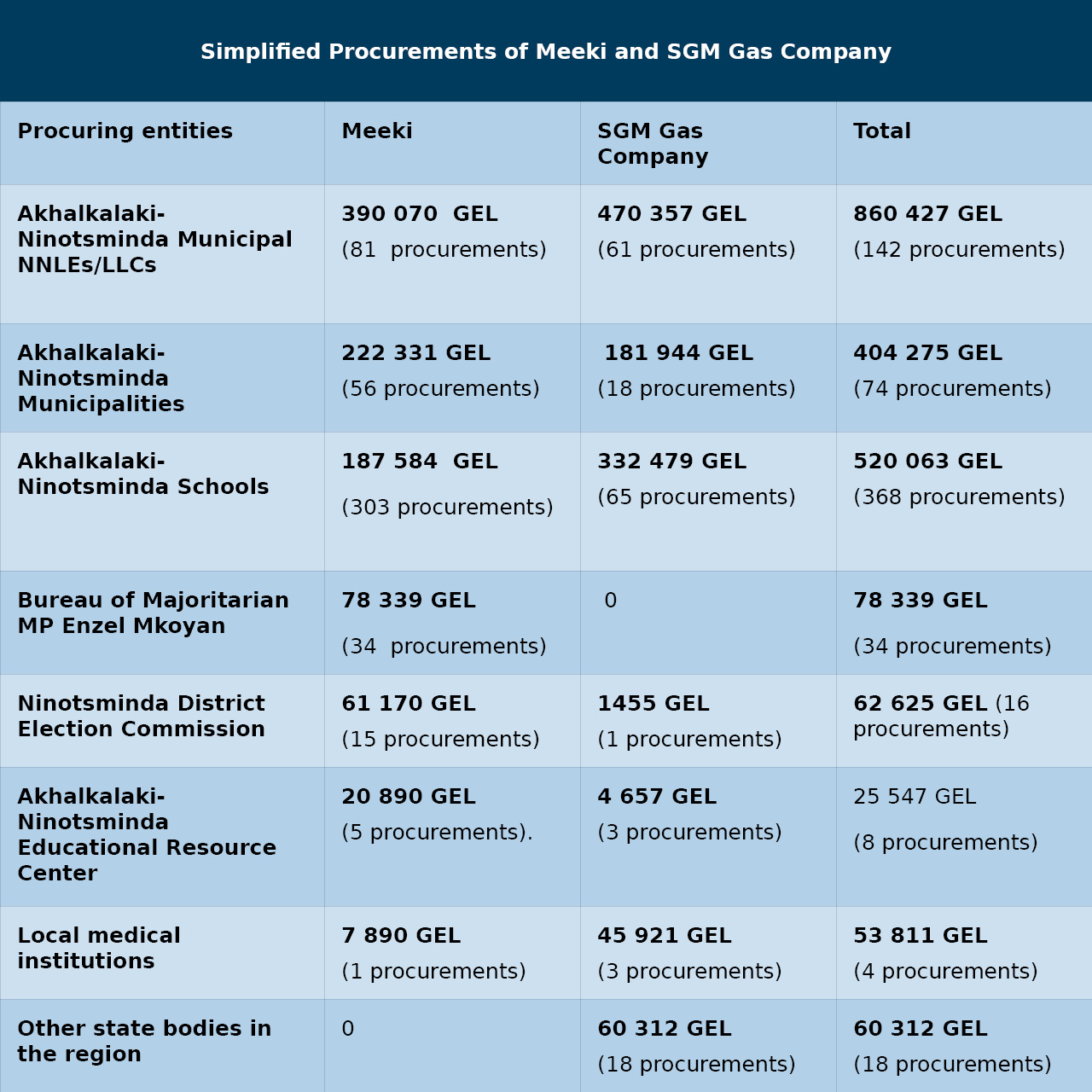 The bureau of the Majoritarian MP Enzel Mkoyan purchases fuel only from LLC Meeki. In January 2014, the bureau started purchasing fuel from the companies of the Mkoyans through simplified procurement procedure and the last contract was signed in October 2019. During this time period, the bureau made 34 purchases of fuel from LLC Meeki to a total of 78 339 GEL, out of which 9 contracts amounting to 49 000 GEL were signed by the Majoritarian MP directly with the company’s director, Norair Mkoyan, who is Enzel Mkoyan’s uncle.

After Enzel Mkoyan’s son became a shareholder of LLC Meeki, the bureau signed a contract for four simplified procurements with the company to a total of 4 866 GEL.

LLC Akhalgazi, the third company of the Mkoyan family, has only one simplified procurement contract to the amount of 1600 GEL that was signed in 2011 with the Akhalkalaki Higher Education Institution-College.

The companies of the Mkoyans are winning state procurements in Javakheti with no competing bids.

Since 2012, the budgetary organizations in Javakheti, which were the procuring entities for the companies of the Mkoyans, no longer announce tenders for the purchase of fuel.

Apart from the LLCs owned by the Mkoyans and other large oil distributor companies, Grigol Hambartsumyan’s company is also operational in Javakheti. From 2010 to 2014, it received simplified procurements in Akhalkalaki and Ninotsminda through LLC Maximedi, and then through LLC Otsneba-2014 from January 2014 to June 2016. The Hambartsumyans started the fuel business in Akhalkalaki in 1998, which was a year earlier than Meeki. However, to this date, LLC Maximedi and LLC Otsneba-2014 have secured 132 tenders from the Ninotsminda and Akhalkalaki municipal bodies and public schools, to a total of 72 762 GEL. 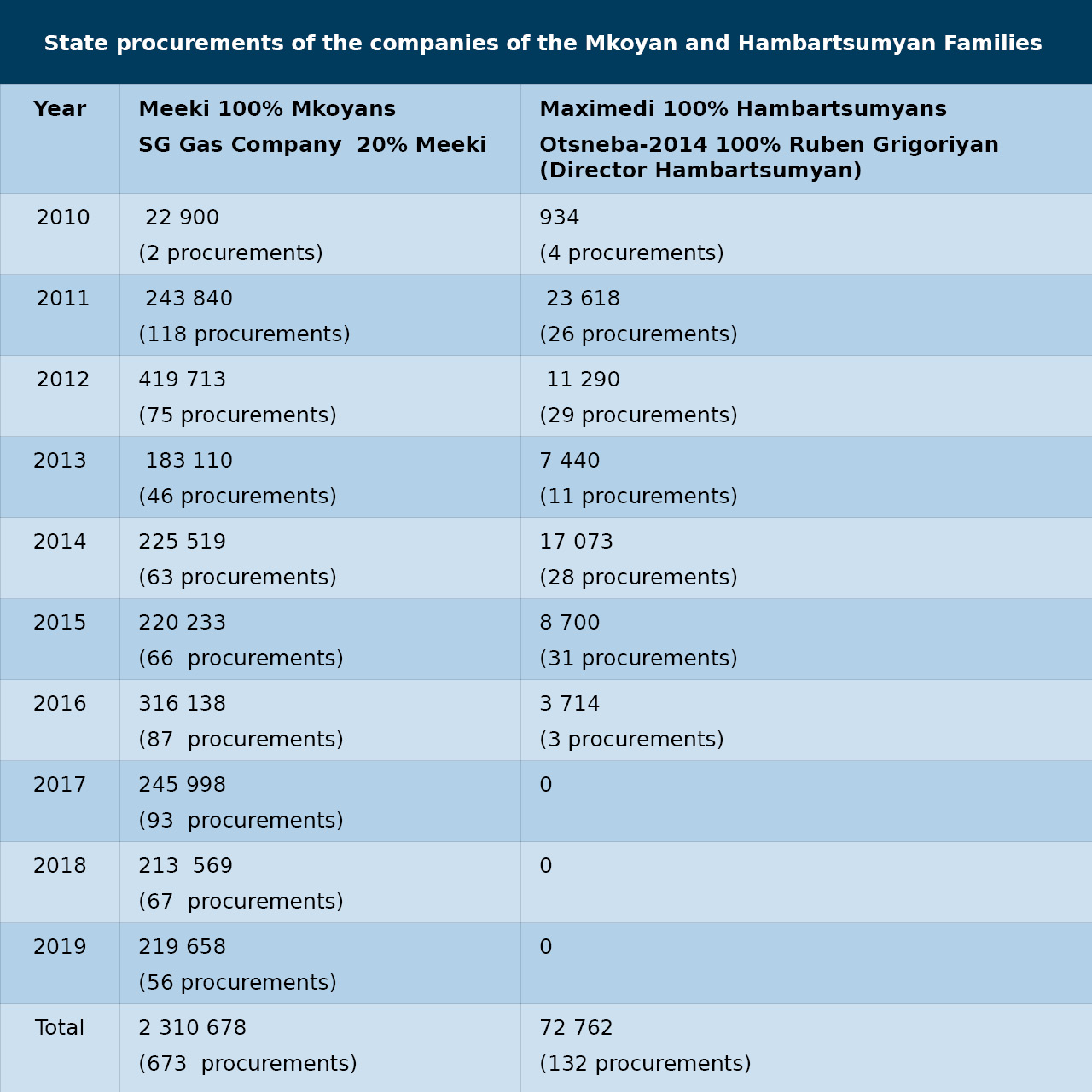 Since 2016, after Enzel Mkoyan became the Majoritarian MP in Akhalkalaki, his competitor company Otsneba-2014, which is registered in the Akhalkalaki municipality, has not been active in procurements. In exchange, just as it is the case in Ninotsminda, the companies of the Mkoyans are more active in Akhalkalaki.

Contributions to the Ruling Party

Transparency International Georgia calls on the Anti-Corruption Agency of the State Security Service and the Prosecutor's Office of Georgia to investigate every state procurement won by LLC Meeki and LLC SGM Gas Company and to determine if the tender requirements were tailored specifically for them and if there were any signs of corruption.