The issue of offshore zones is quite relevant for Georgia. Companies registered in offshore zones invest a considerable amount of money in both private and state-funded projects. Given the specificity of offshore zones, it is difficult and sometimes even impossible to find out who the real owners of such companies are, who is behind the money coming from offshore, and why they chose to use offshore instead of being openly and transparently involved in economic activity.

Today there are about 3,000 companies registered in Georgia that are fully or partly owned by offshore companies. According to some scholars, an inflow of money is so important that its origin does not matter, but this is a very problematic approach as there may often be a former or current politician behind money coming from offshore, who either has legal restrictions on business activity or seeks anonymity. In this case, the offshore can be used for corruption schemes and money laundering.

As there are many questions about offshore, it is important to better understand what the offshore zone is, why it is used, why this issue is relevant for Georgia, and what kind of policies the developed and democratic states have with this regard.

An offshore zone also called a tax haven, is a country or a specific territory of a country where companies enjoy special concessional terms. Lower tax rates, the secrecy of company owner, simpler financial reporting rules and ease of company registration and operations can be among such terms. It is also very important that you do not have to be a resident of this country or have a registered office (business representation) for having an offshore company. If you want to escape the state bureaucracy, legal control, and taxation, offshore can be a solution.

There are dozens of offshore zones in the world. For offshore countries, such a flexible legal system is profitable. In addition to the fact that companies pay a certain fee for offshore registration, local companies provide mandatory services for foreign companies.

Why are offshore zones used?

Tax break is a main incentive for registering a company in offshore zones. This applies to corporate taxes like profit tax, dividend and income taxes. Because there are high taxes in developed countries and the capital amounts to trillions of USD, part of funds flows to offshore.

For some businesspersons, confidentiality and low standards of verification of the origin of money are among primary drivers for using offshore zones. However, these conditions also simplify the possibility of money laundering. Through offshore companies, individuals can engage in active business without their identity being disclosed.

Offshore is often used by both current and former politicians and government officials who are prohibited/restricted from doing business or do not want to show off their wealth so as not to harm their reputation. A striking example of this was the Panama Papers published by the International Consortium of Investigative Journalists in April 2016. Based on the confidential database of offshore companies, it turned out that more than a hundred politicians, including the current ones, were using offshore companies to evade taxes and launder illegal money. The documents revealed not only pure connections of politicians with offshore companies but also some illegal actions of them.

Registration of a company in an offshore zone is generally not prohibited, but it increases the risk of corruption and fraudulent transactions. For example, as government officials are restricted to participate in public procurement or programs, they may have offshore companies and receive money from the state budget through these companies or their affiliates. Moreover, when a government official owns a beneficiary company he or she is likely to ensure a non-competitive environment. In other case, a person who is responsible for the distribution of public money and the recipient of this money may be the same person.

This year on September 13, while commenting on FDI Ivane Matchavariani, the Minister of Finance of Georgia, stated: "you should know that 60-70% of FDIs flowing in Georgia during various years by nature were Georgian, local investments. This money has been transferred abroad and then returned through different countries or offshore zones."

According to the official statistics, in 2010-2018, the FDIs coming from those countries which have offshore territories amounted to USD 5 billion. This is 38% of total FDIs attracted by Georgia during this period. Most investments – USD 3 billion in total - came from the Netherlands and the United Kingdom. It does not mean that these investments solely came from offshore territories of the mentioned countries. As stated above, it is difficult to sort the FDI data by this criterion. With USD 300 million Panama tops the list of investors of those countries that are entirely offshore zones followed by Malta with USD 239 million, Virgin Islands with USD 96 million, Belize with USD 64 million and so on. 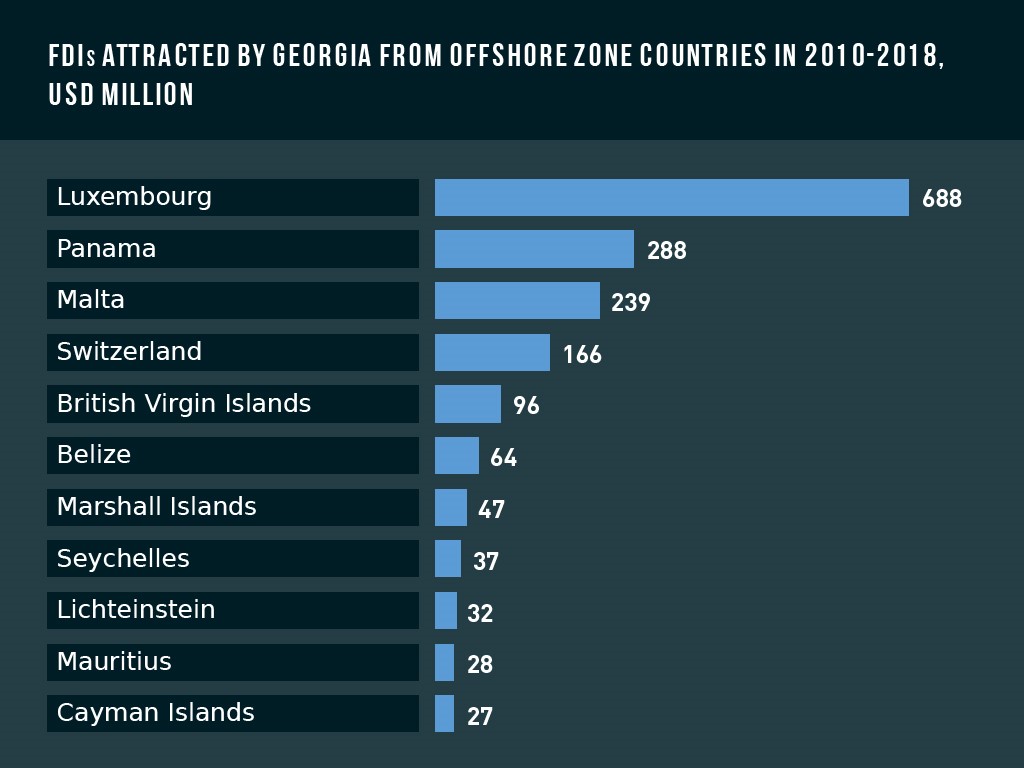 In October 2018, Transparency International Georgia published a study on offshore companies connected to Bidzina Ivanishvili. According to this study, at least 9 offshore companies and more than 70 organizations registered in Georgia in some form are affiliated with Ivanishvili, the Chairman of the ruling Georgian Dream party. While a politician's association with a private company, including offshore one, is not always illegal, it is a potential source of conflict of interest and corruption, especially when all branches of government are in the hands of one party. Since offshore companies are mainly chosen to cover the real origin of money and low transparency this circumstance raises additional doubts.

Bidzina Ivanishvili and Davit Kezerashvili, the former Minister of Defense, also were mentioned in the 2016 Panama Papers. In April 2016, Transparency International Georgia published an article stating that Bidzina Ivanishvili did not include an offshore company in the asset declaration of a public official, which he filled out when he became a Prime Minister of Georgia.

According to the study published by the Institute for Development of Freedom of Information (IDFI) in 2016, Russian citizens own significant capital in Georgia and control several strategic objects through companies registered in offshore zones. These include thermal and hydro power plants, fuel companies, precious metals companies, Beeline, Georgian Water and Power and others.

Full prohibition of the entry of offshore capital into a country is hardly justifiable and no country does it. However, it is unacceptable for the political culture of developed countries to have such politicians who are directly or indirectly related with offshore companies. A good example of this was the scandal of Panama Papers, when, for example, the British Prime Minister had to explain the sale of a 30,000-pound share of an offshore company.

In addition to the fact that the links of politicians with offshore companies encourage corruption, there is a problem with so-called political morals. It is strange when a politician being in power and able to make important public decisions, finds the business environment of another country more favorable for company registration and taxation than his own country while other citizens do not use such privileges.

In May 2016, Giorgi Kvirikashvili, the former Prime Minister of Georgia and Tea Tsulukiani, the Minister of Justice attended the Anti-Corruption Summit that was held in London. The London Anti-Corruption Summit coincided with the publication of the Panama Papers. Six countries participating in the summit (Afghanistan, France, Kenya, the Netherlands, Nigeria, and the United Kingdom) pledged to maintain a register of real beneficiaries of offshore companies. An additional six countries (Georgia, Australia, Indonesia, Ireland, New Zealand, and Norway) said they would consider creating such a registry.

Experience of developed countries and recommendations

After the scandal of Panama Papers, the attitude towards offshore zones and companies has significantly changed in developed countries, especially in EU states, as this was an unprecedented case. Such a volume of information about offshore companies and their clients has never "leaked" before. The scandal has had major consequences with Iceland's prime minister and sectoral ministers of various countries resigning, and some politicians having to explain, such as the prime ministers of Canada and the UK. An inquiry commission has been set up in the European Parliament. After 10 months of work, the EU has published a blacklist of 17 offshore zone countries, with whom it has been more attentive and has demanded high standards of transparency in certain operations.

In recent years, developing countries have been actively considering opportunities to mitigate potential risks coming from offshore zones and are gradually adopting a high standard of disclosure to offshore companies, which is one of the recommendations of the Organization for Economic Co-operation and Development (OECD) anti-corruption network. Georgia also is a member of this Anti-Corruption Network, so this recommendation applies to it as well. Moreover, as already mentioned, due to the high level of corruption, this recommendation requires to be considered.

Some regulations regarding offshore companies should be also worked out in Georgia. The country should comply with the recommendations of the OECD Anti-Corruption Network and require disclosure to offshore companies, at least when these companies or their subsidiaries participate in public procurement, the Partnership Fund’s projects or other state programs.