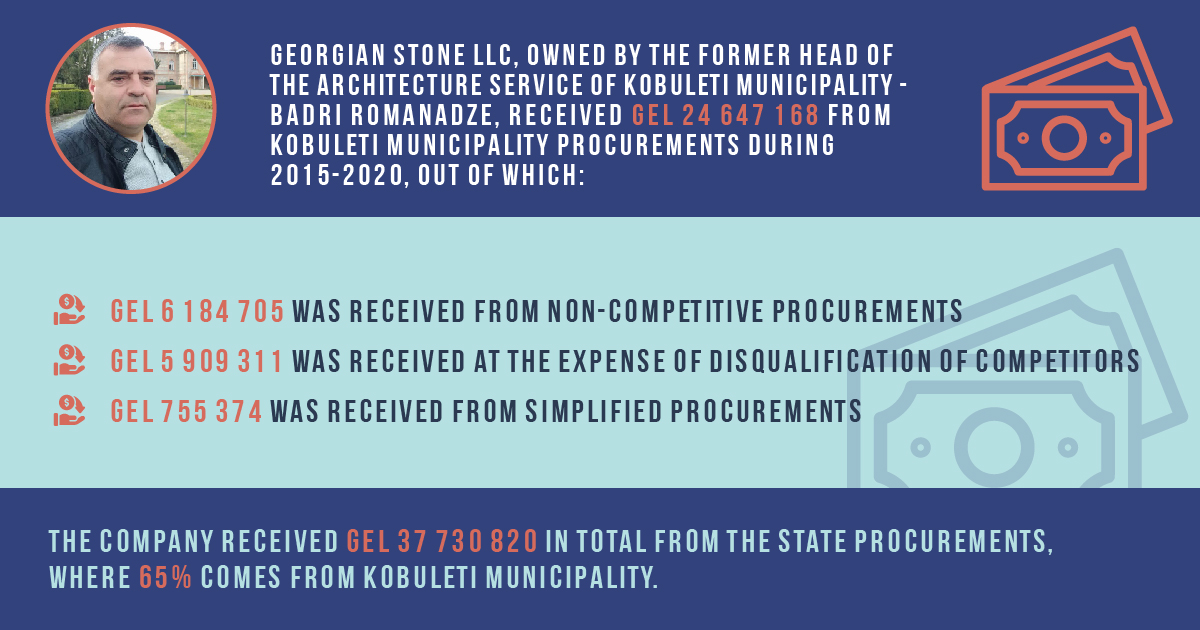 Last year, Transparency International Georgia published research on tender conditions customized to fit Georgian Stone LLC and on other suspicious circumstances. Our organization called upon the relevant government bodies for the investigation, however, it was not followed with a reaction from them.

Suspicious tendencies were revealed in the procurements of Poti and Terjola municipalities as well. The company won 3 state procurements of Poti municipality in 2020, beating its opponents by offering the lowest bids. However, at the end of the day, the contracts were signed with greater values than the other competitors had bidden. Moreover, the final contract cost exceeded the tender’s initial estimated cost. Suspicious circumstances were revealed from the large procurements signed with Georgian Stone LLC by Terjola municipality too. The number of changes made in this document draws attention as well.

The Anti-Corruption Agency of the State Security Service should become interested in the aforementioned circumstances at least this time.

Up to GEL 6 million from Kobuleti procurements in 2020

Georgian stone LLC received GEL 5,837,734 (58% of total income from electronic tenders)  from 2 large procurements of Kobuleti municipality. The company’s opponent was disqualified in one of those tenders (The estimated cost of the tender was GEL 4.7 million).

The following occurrence drew our attention to Georgian Stone LLC: Kobuleti municipality disqualified Award LLC from the tender, which bade GEL 500,000 less during the second stage tender for building the Kobuleti Seaside Park and awarded the tender contract to the ex-official’s company for GEL 4,637,636 that was less than the tender’s estimated value (GEL 4,773,769). Georgian Stone LLC won the first stage tender of building the Seaside Park in 2019 and received GEL 2,770,077 accordingly.

Director of the company - Badri Romanadze was the Head of the Architecture Department of Kobuleti municipality in 2011-2014. Kobuleti City Hall began a formal relationship with Georgian Stone LLC, once Mr. Romanadze left the position: The company received GEL 24,647,168 from the procurements of local self-governments (65% of the total income from tenders) in 2015-2020, out of which, GEL 6 million - without a competition.

Suspicious circumstances in procurements of Poti and Terjola municipalities

Georgia Stone LLC’s success in procurements of Poti and Terjola municipalities was suspicious in 2020 - the company won 4 procurements by offering the lowest bid, however, the value of contracts was more (GEL 3,074,239) than the highest bids offered to the buyer by competitors. Contract value exceeded the electronic tender’s estimated value in 3 cases:

Georgian Stone LLC provided budget estimate documents to the tender commission based  on the costs that the company pointed out during the participation stage in the tender, however, the reason why the tender was awarded to that particular company which bade the higher cost than the estimated value of the tender is not clear in documents uploaded to the web-page of the State Procurement Agency.

A similar event occurred in the case of the expensive procurement of Terjola municipality - Georgian Stone LLC made the lowest bid for carrying out the works required by the self-government and it led the company to victory. However, the contract awarded was worth more than the competitor’s bid in this specific tender.

The circumstances mentioned above are against the principles of Law on State Procurements and legal frameworks as they disregard the terms of fair competition and other goals of electronic tender.

It is noteworthy, that several changes were made in the awarded contracts in all 4 procurements (NAT200003262 - 7 times, NAT200002538 - 4 times,  NAT200008970 - 2 times, NAT200007696 - once). Hereby, the terms of the most expensive contract awarded by Poti municipality was changed 2 times by the parties because of the errors identified. The contract awarded to Georgian Stone LLC was changed by Terjola municipality because of the same reason. The tender commissions of the local self-governments have not uploaded what errors were made in these contracts. This circumstance raises additional suspicions. It is also noteworthy that the majority of changes made in contracts are related to the postponement of the obligations taken on by the company.

The electronic tenders of Kobuleti, Poti, and Terjola municipalities won by Georgian Stone LLC, and the contracts awarded to that particular company raise suspicions of potential corruption cases because of lack of transparency by disregarding the fair competition rules and series of unsubstantiated changes.

We call upon the Anti-Corruption Department of State Security Service to start the investigation on the aforementioned facts immediately.