The Parvana TV and radio station, which belongs to Konstantin Vardanyan, the Deputy Chairperson of the Municipal Council of Ninotsminda, has received GEL 320,645 from the budget of Ninotsminda since 2014, when Mr. Vardanyan was appointed to the office. Parvana concluded 9 of the 12 contracts of procurements obtained during the seven years with the City Hall of the Ninotsminda Municipality and its non-entrepreneurial (non-commercial) legal entities (N(N)LEs). Since Mr. Vardanyan’s appointment to the office, the City Hall has also provided Parvana with an office space with an area of 273 sq. meters in Ninotsminda free of charge.

Konstantin Vardanyan founded the civil society organization Radio and TV Broadcasting Station ‘Parvana’ in Ninotsminda together with four locals on January 12, 2001. After the Georgian Dream came into power, the head of the local TV station of Ninotsminda was appointed as the Deputy Chairperson of the Municipal Council of Ninotsminda. From the spring of 2013 to March 2020, Vardanyan held two positions – he was both the director of Parvana and the Deputy Chairperson of the Municipal Council of Ninotsminda. Vardanyan resigned from the position of the head of the TV station on March 9 this year, and his spouse, Albina Vardanyan was appointed as the director of the company. However, Parvana had obtained all the public procurements during the time when Konstantin Vardanyan was in charge of the TV station.

Since 2014, the Ninotsminda City Hall has been concluding 1-year contracts with Parvana for the procurement of television services. Accordingly, the TV station covers the projects and events of the City Hall during the entire year. Neither the local Nor radio station, which has been broadcasting in Ninotsminda since 2012, nor the local Internet publication Geonews, which has been actively covering the news in Javakheti since 2014, have obtained a public procurement from the Ninotsminda City Hall on a single occasion, whereas in the same region, the Borjomi City Hall, for example, distributes the funds allocated for information services to a local TV station, Internet publication, and newspaper.

In the years 2014-2016, Parvana won 3 tenders announced by the Public Broadcaster in Ninotsminda without competition and received GEL 19,100 in total. 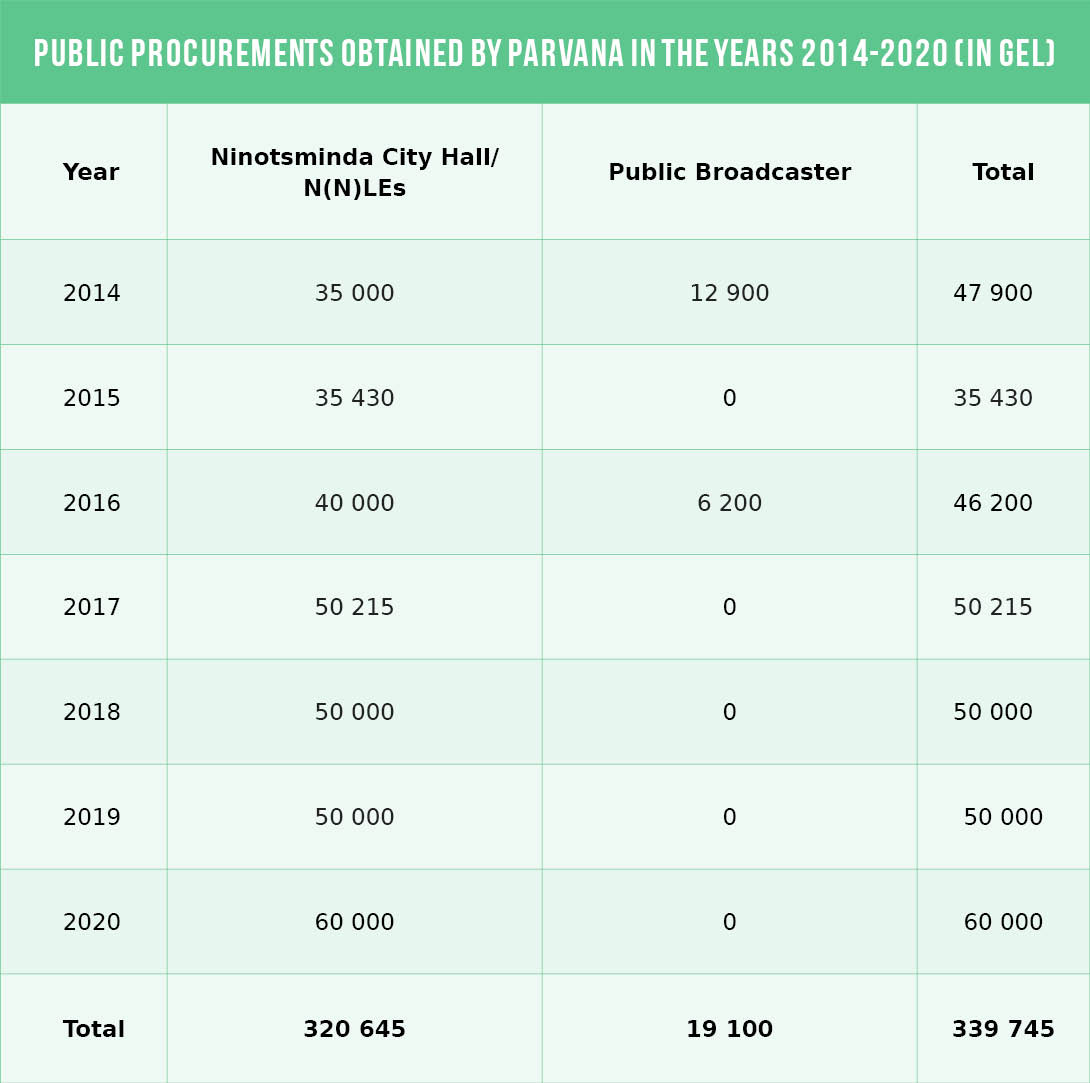 As for Parvana’s contracts with the Ninotsminda City Hall, they all indicate Konstantin Vardanyan’s spouse, Albina Vardanyan, as the director of the company. One of these documents, which concerns a simplified procurement worth GEL 35,000, is also signed by the immediate superior of Konstantin Vardanyan, the Chairperson of the Municipal Council of Ninotsminda, Sumbat Kiureghyan. However, according to excerpts from the Public Registry, Albina Vardanyan had no official ties (until March 2020) with Parvana, the company participating in the public procurements.

Konstantin Vardanyan’s spouse, Albina Vardanyan, founded Parvana TV LLC in Ninotsminda on June 22, 2015. She is both the director of the limited liability company and owner of a 100% stake, although the company has never taken part in public procurements. It follows that the public procurements were obtained by the Parvana (identification code 236686412) owned by Konstantin Vardanyan, the Deputy Chairperson of the Municipal Council of Niotsminda, while the contracts were signed by the director of another company, Parvana TV LLC (identification code 436684134).

In addition, despite the fact that the participant of all the public procurements is the Parvana of Konstantin Vardanyan (identification code 236686412) and that the legal form of this company has always been N(N)LE, some of the contracts indicate the legal form of the company as N(N)LE and others as LLC.

The company of the Vardanyans has been functioning in a building on the balance sheet of the Ninotsminda City Hall without paying a rent for six years. The space with an area of 273 sq. meters, which is located at 37 Freedom Street, was transferred to Parvana by usufruct in February 2015.

Since 2013, Konstantin Vardanyan has not indicated in any of his asset declarations about the Parvana registered either in his or his spouse’s name. This violates Paragraph J of Article 15 of the Law on Conflict of Interest and Corruption in Public Service.

TI Georgia calls upon the Anti-Corruption Agency of the State Security Service and the Office of the Prosecutor General to study each of the procurements obtained by Parvana TV and radio station and to establish whether these procurements were tailored to its interests and whether they reveal signs of corruption. We also call upon the Civil Service Bureau to study the asset declarations of Konstantin Vardanyan and to act accordingly if they discover a violation of law.