Georgia's economic dependence on Russia: Impact of the Russia-Ukraine war

Transparency International Georgia studied the issue of Georgia's economic dependence on Russia, as it poses a threat to the country. In particular, the data as of June 2022, on trade between Georgia and Russia, tourists, remittances, foreign direct investments from Russia, and registration of Russian companies in Georgia were analyzed.

Among the specific findings of the study, the following should be noted:

Georgia's economic dependence on Russia is threatening, as Russia has repeatedly used economic leverage against Georgia, Ukraine, Moldova, and other countries since the collapse of the Soviet Union. For example, in 2006 Russia first cut off natural gas and electricity supplies to Georgia, then virtually banned the export of products from Georgia to Russia, and at the end of the same year began deporting Georgian citizens. Russia also decided to "punish" Georgia after the events of June 20, 2019[ii] and banned flights to Georgia.

Therefore, it is important to know the level of dependence of the Georgian economy on Russia and the tendency to strengthen resilience in the face of possible threats. Transparency International Georgia has been studying this issue for years and periodically publishes the research results. The last study[iii] was published in March of this year, which showed how Georgia was dependent on Russia for trade, tourism, and money transferred by emigrants, and also highlighted large Russian companies operating in Georgia.[iv]

The war that started in Ukraine at the end of February 2022 made the monitoring of Georgia's economic dependence on Russia even more relevant. The harsh sanctions imposed on Russia are leading to a decrease in its economy, which also affects the countries that have close economic relations with it. That’s why Transparency International Georgia is more actively monitoring this issue and in the next 8 months will present 3 updated publications on the impact of the Russia-Ukraine war on Georgia's economic dependence on Russia.

This is the first publication that analyses data on trade between Georgia and Russia, tourists and remittances from Russia, and registration of Russian companies in Georgia as of June 2022. The next two publications are scheduled to be published in October this year and February 2023.

In January-June 2022, the export of Georgian products to Russia decreased by 2.8% and amounted to USD 256 million, while the import increased by 51% and reached USD 706 million. Despite such an increase, the share of trade with Russia in the total trade balance of Georgia decreased from 11.8% to 11.4%. The reason for this was the greater growth of Georgia's foreign trade with other countries. However, the share of imports from Russia taken separately was 11.9% of total imports, which is the highest in the last 15 years. 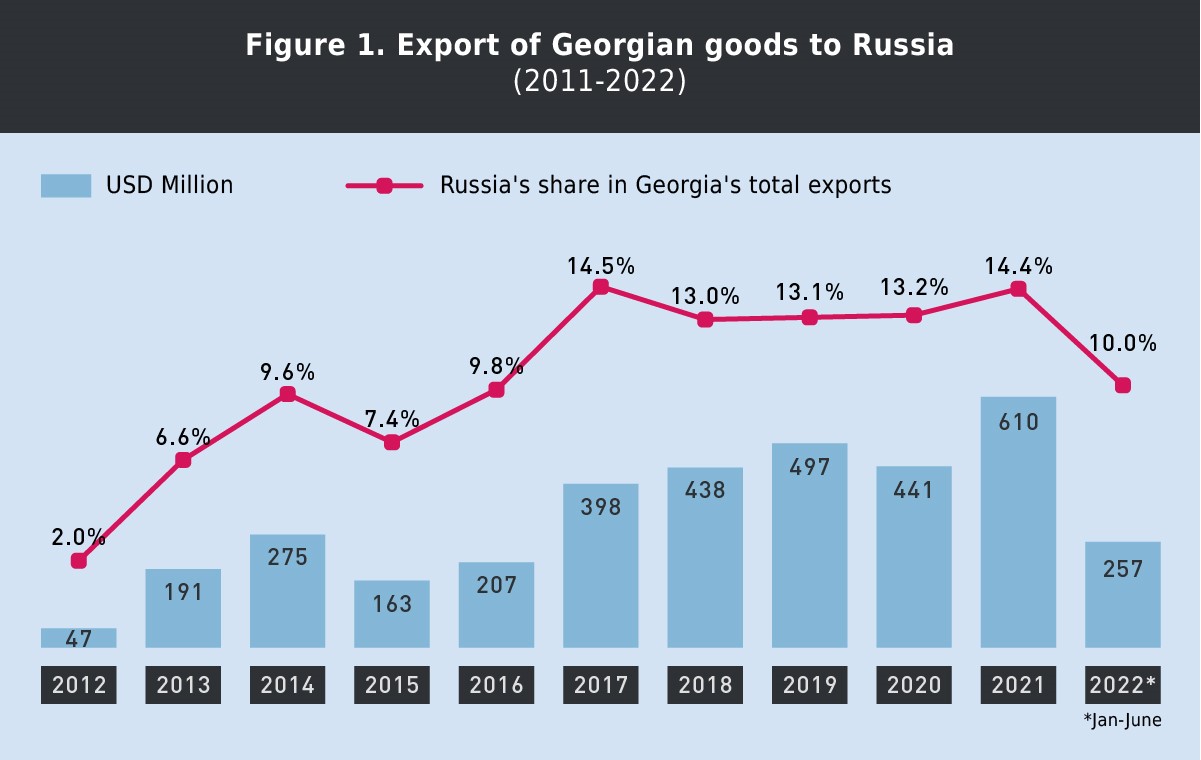 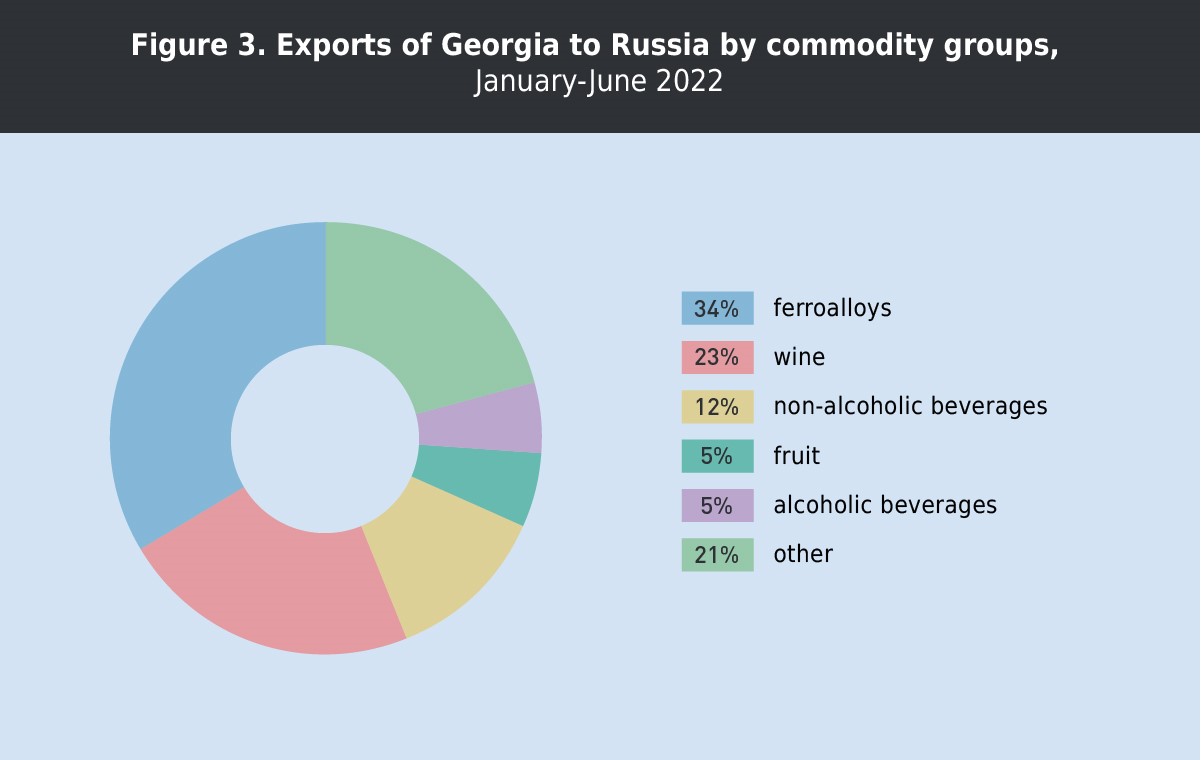 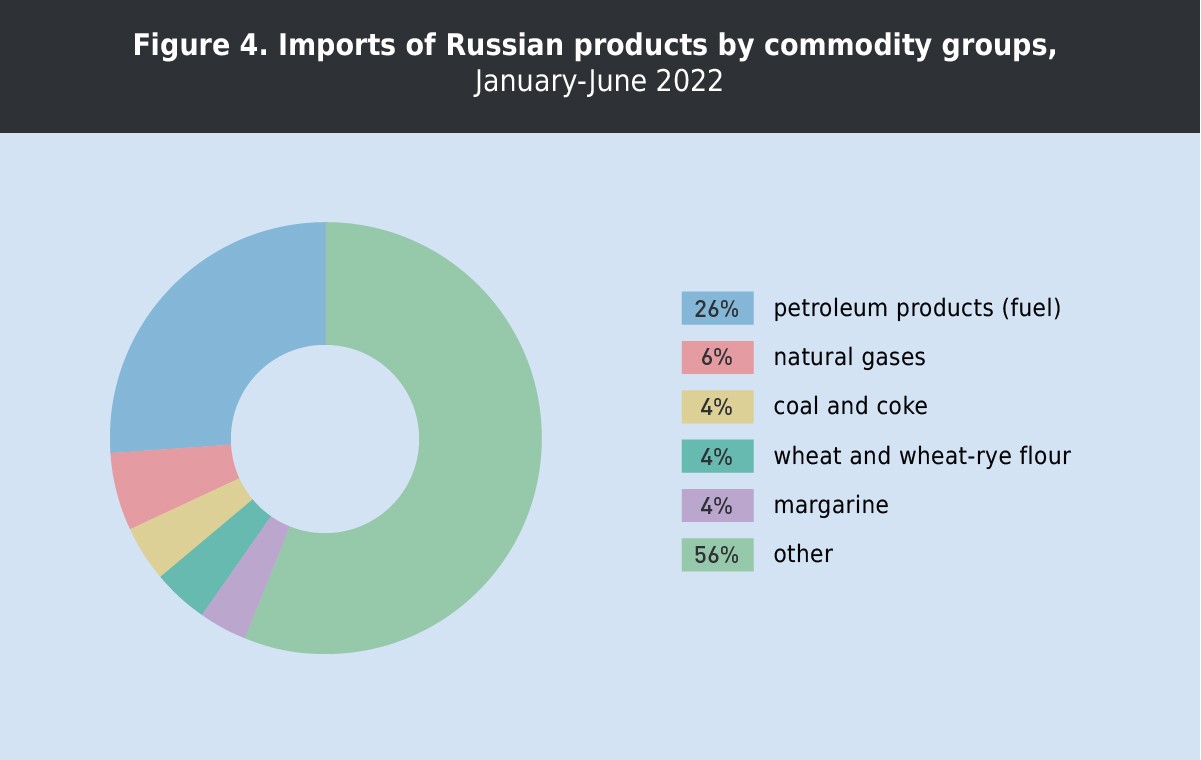 Georgia's dependence on Russian wheat and wheat flour has been also traditionally high. In 2021, 319,000 tonnes of wheat worth USD 87 million were imported from Russia, which was 94% of Georgia’s wheat imports. Since 2022, wheat imports have been replaced by wheat flour imports. Due to Russia's increased tax on wheat exports, importers have chosen to import wheat flour instead, which was ultimately cheaper. In January-June 2022, the import of wheat flour from Russia to Georgia increased 14 times, while the import of wheat was halved. In total, the share of Russian wheat and wheat flour in Georgia's total import of the same goods was 95%.

After the start of the Russia-Ukraine war, in March-June 2022, Georgian exports to Russia decreased by 16% and amounted to USD 163 million. In March-June, the share of the Russian market in the total exports of Georgia was 9.1%, while the figure for the same months of 2021 was 14%. In the same period, imports from Russia increased by 57% and amounted to USD 524 million. The share of Russia in the total imports of Georgia was 12.8%, while it was 10.6% in March-June of the last year.

Before the Covid-19 pandemic, Georgia was most dependent on Russia for its income from tourism. According to the information from the National Tourism Administration of Georgia, in 2019, up to 1.5 million Russian visitors came to Georgia, as a result of which Georgia received approximately USD 776 million in income.[x] 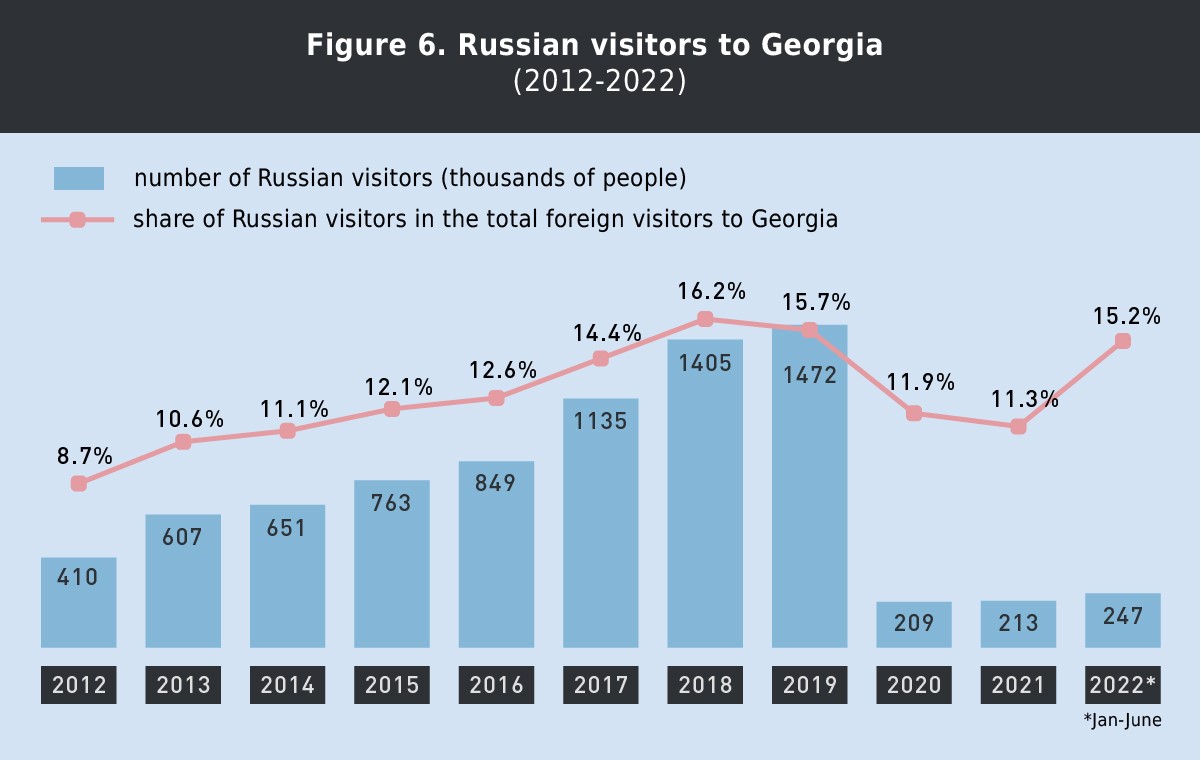 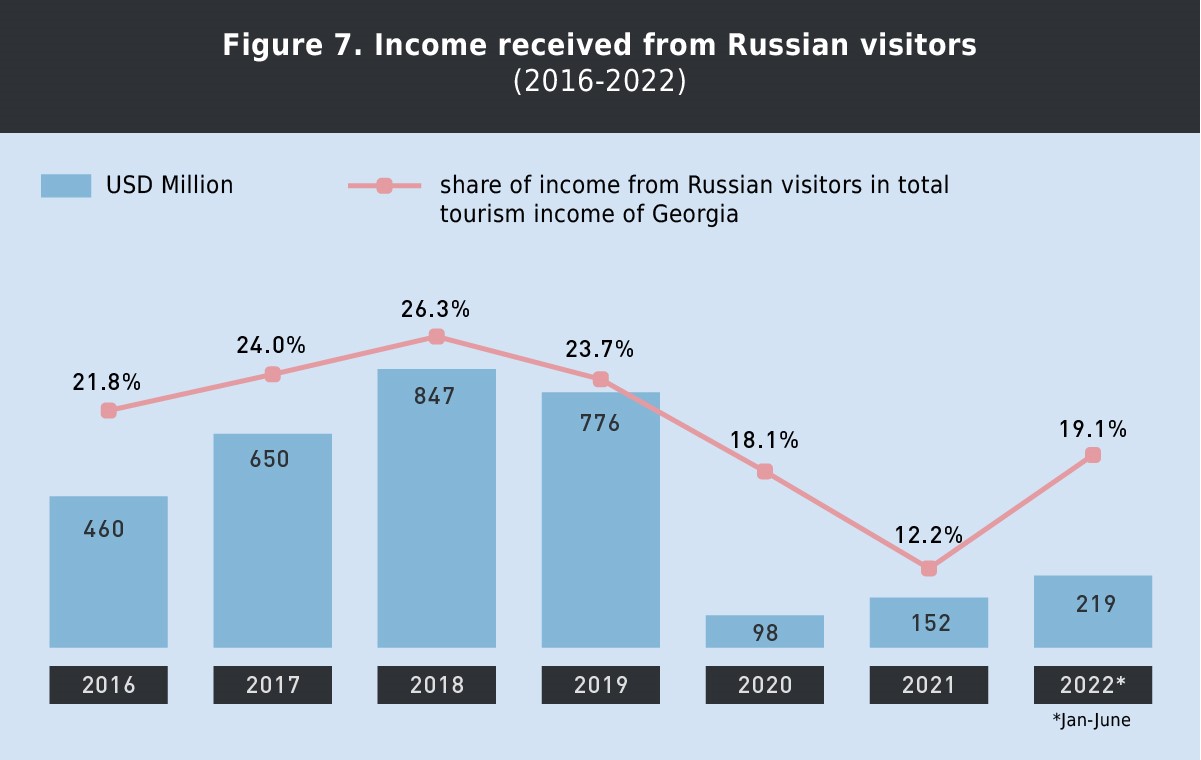 Traditionally, funds transferred by Georgians employed in Russia have been an important source of income for Georgia. In recent years, the share of remittances received from Russia in Georgia’s total remittances tended to decrease. For example, in 2012, the share of Russia in the total foreign remittances of Georgia was 56%, and in 2021 it was only 17.5%. This was caused by two circumstances: the amount of money transferred from Russia to Georgia has been decreasing from year to year, while the transfers from other countries have increased.

In 2022, the situation related to remittances changed significantly, which is a result of the Russia-Ukraine war. In January-March, an average of USD 24 million per month was transferred from Russia to Georgia. The remittances began to grow rapidly from April when USD 133 million were transferred. In May this figure stood at USD 314 million, and in June it was USD 231 million.

In total, USD 750 million were sent from Russia to Georgia in 6 months, which is even more than the annual figure of previous years. As a result, the share of Russia in Georgia’s total remittances increased to 42%. The last time such a high figure was in 2015. If we compare the April-June 2022 transfers from Russia with the same figure of April-June 2021, it increased 6.5 times. The main reason for such high growth is the increased flow of Russian citizens moving to Georgia, who send money from Russia and/or transfer their savings. It seems that Russian citizens are fleeing the difficult situation created in their country and the imposed sanctions after the start of the war in Ukraine. Some of them decided to stay in Georgia for a long time. 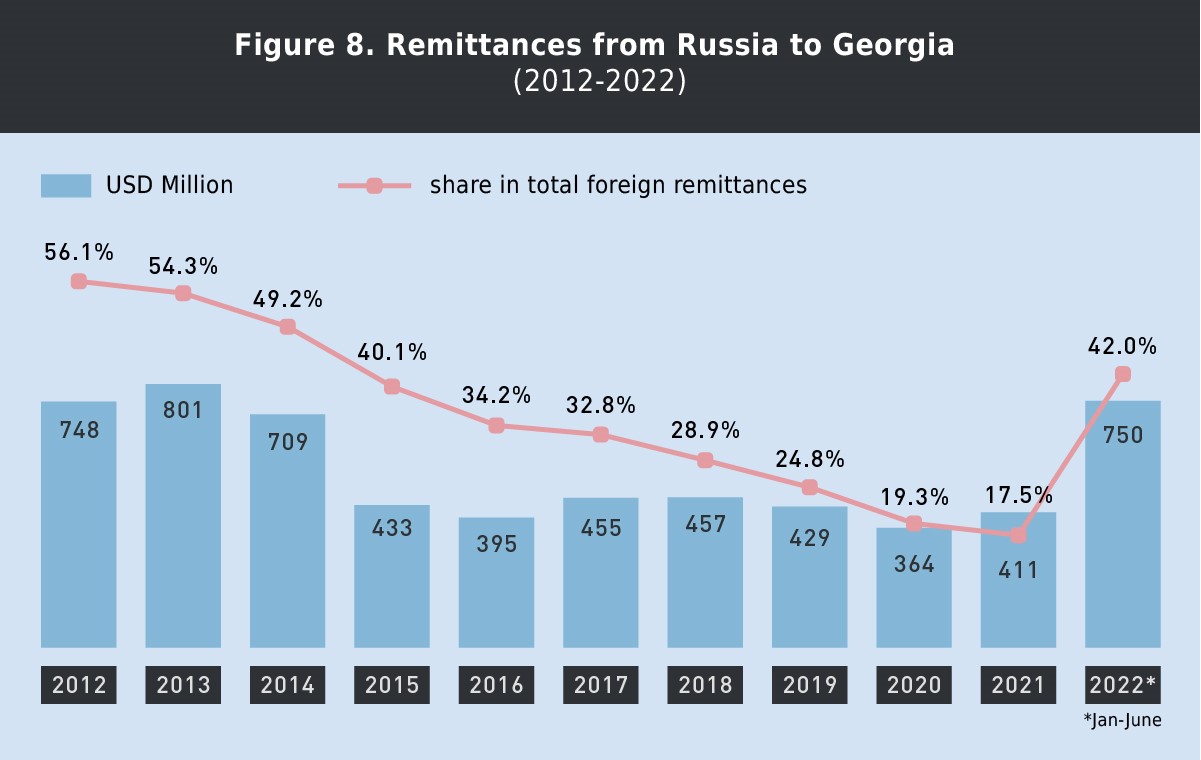 After examining the databases of the Georgian Business Register, we have found those companies, all or part of which are owned by Russian legal or natural persons (citizens). We call such companies Russian companies. However, this may not be a complete list, as a company registered in Georgia may belong to a Russian legal entity or an individual through a company in another country. There are also frequent cases when the owner of a Georgian company is registered offshore, which makes it difficult to determine the real owners of the company.

[i] 10 Recommendations to the Government of Georgia on Economic Issues, https://cutt.ly/DZEyOOe

[iv] Russian companies are companies operating in Georgia, all or part of which are owned by legal entities and individuals of the Russian Federation.

[vi] The figure of electricity imported from Russia does not include Russian electricity supplied to the occupied territory of Abkhazia, which passes through the territory controlled by Georgia.

[xi] An offshore zone also called a tax haven, is a country or a specific territory of a country where companies enjoy special concessional terms. Lower tax rates, the secrecy of company owner, simpler financial reporting rules and ease of company registration and operations can be among such terms.

Publication of this report was made possible with the support of the Open Society Foundations. The views expressed in this publication are those of Transparency International Georgia and do not necessarily reflect the views of the donors. 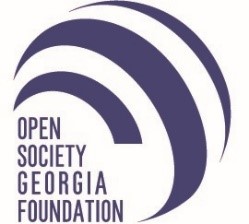