The number of government PR service personnel and budgetary costs expended for their remuneration are still high in 2017-2018.

Considering strong interest regarding the previous research published by Transparency International Georgia, the Organization proceeds with the study of the topic and this time offers data for 2017-2018. Taking into account the main trends of the last-year research, which was based on data retrieved from 133 agencies, we increased the number of agencies to maximum practicable extent (up to 216), we retrieved data about the number of personnel employed in public relations field and remuneration received thereby. Total 194 agencies responded.[1] Several organizations provided us with incomplete information, including Tbilisi City Hall, while the Administration of Government sent inaccurate data. Whereas the data from certain agencies are still lacking or provided information is incomplete, there might be some inaccuracy in presented data, but the foregoing does not affect the general tendency.

Main Findings of the Research

The number and remuneration of PR service employees had been persistently growing from 2013 including 2018, the same trend was maintained in 2017-2018 as well.[3] 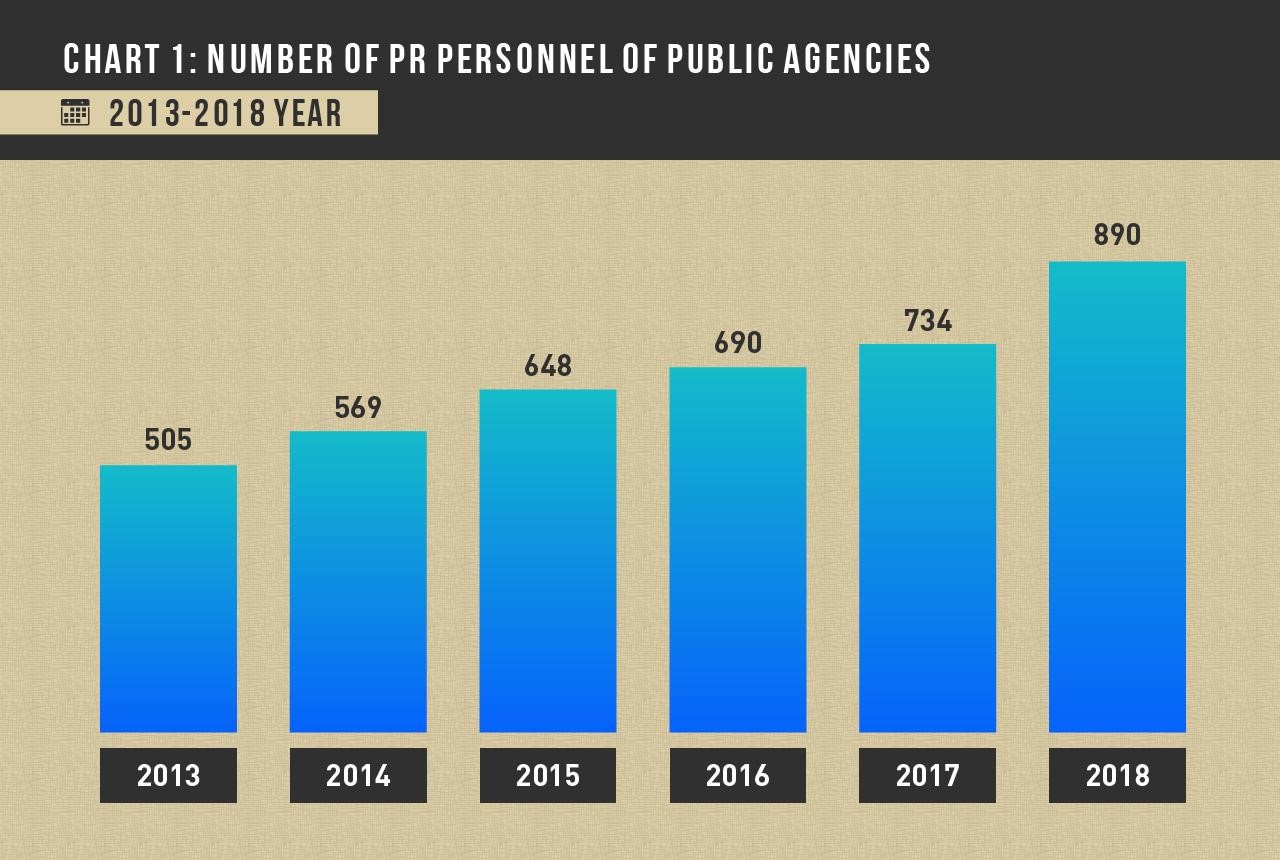 *For maximum precise comparison the table is based on data, retrieved from 133 agencies for the research published in 2018. 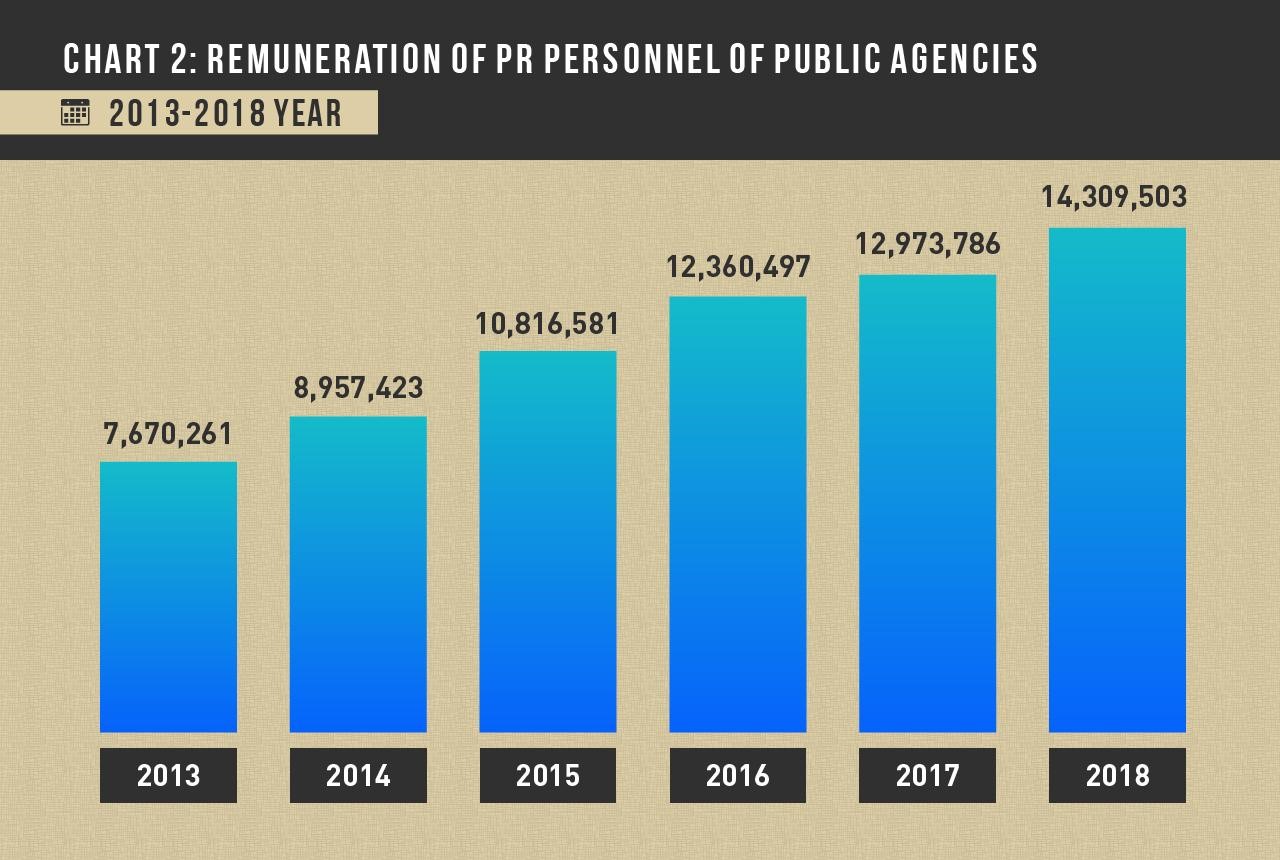 *For maximum precise comparison the table is based on data, retrieved from 133 agencies for the research published in 2018.

Procession of the new information received from 194 agencies evidenced, that the remuneration of PR service personnel of budgetary agencies increased by 1.9 million GEL in 2018 as compared with 2017. The number of personnel has also increased. 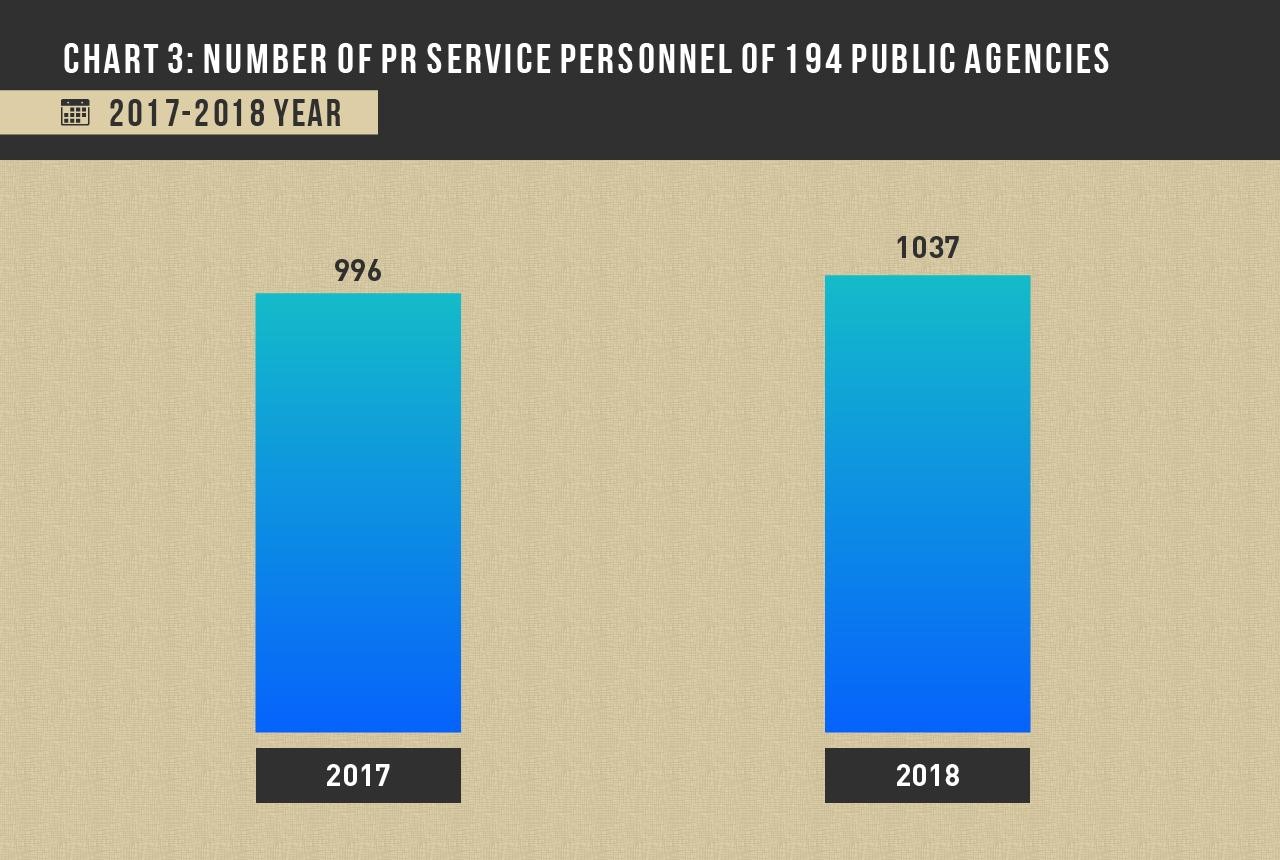 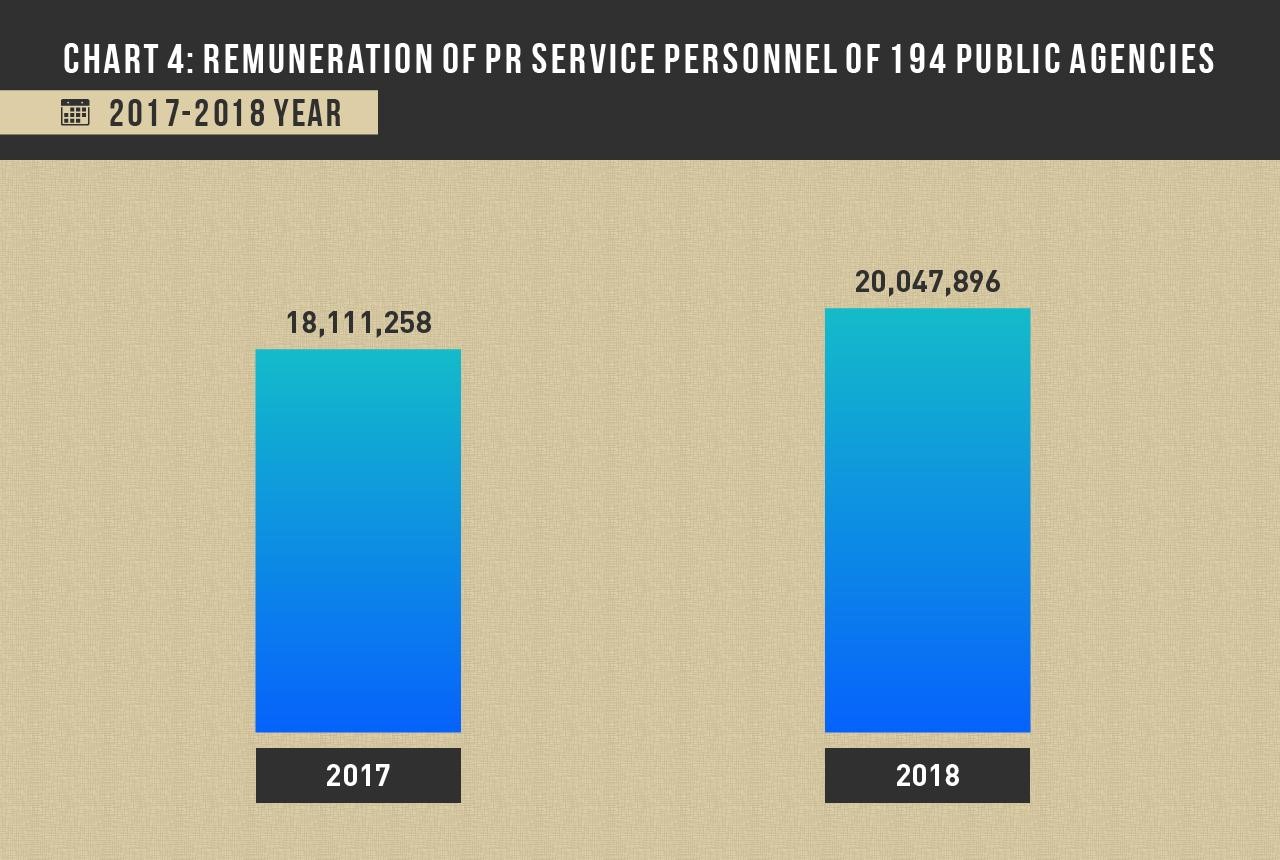 The Media/Public Relations Department of the Ministry of Internally Displaced Persons from the Occupied Territories, Labour, Health and Social Affairs of Georgia has the largest staff consisting of 73 persons. The Ministry of Defense is on the second place. The Top Ten of PR service personnel of 2018 is as follows: 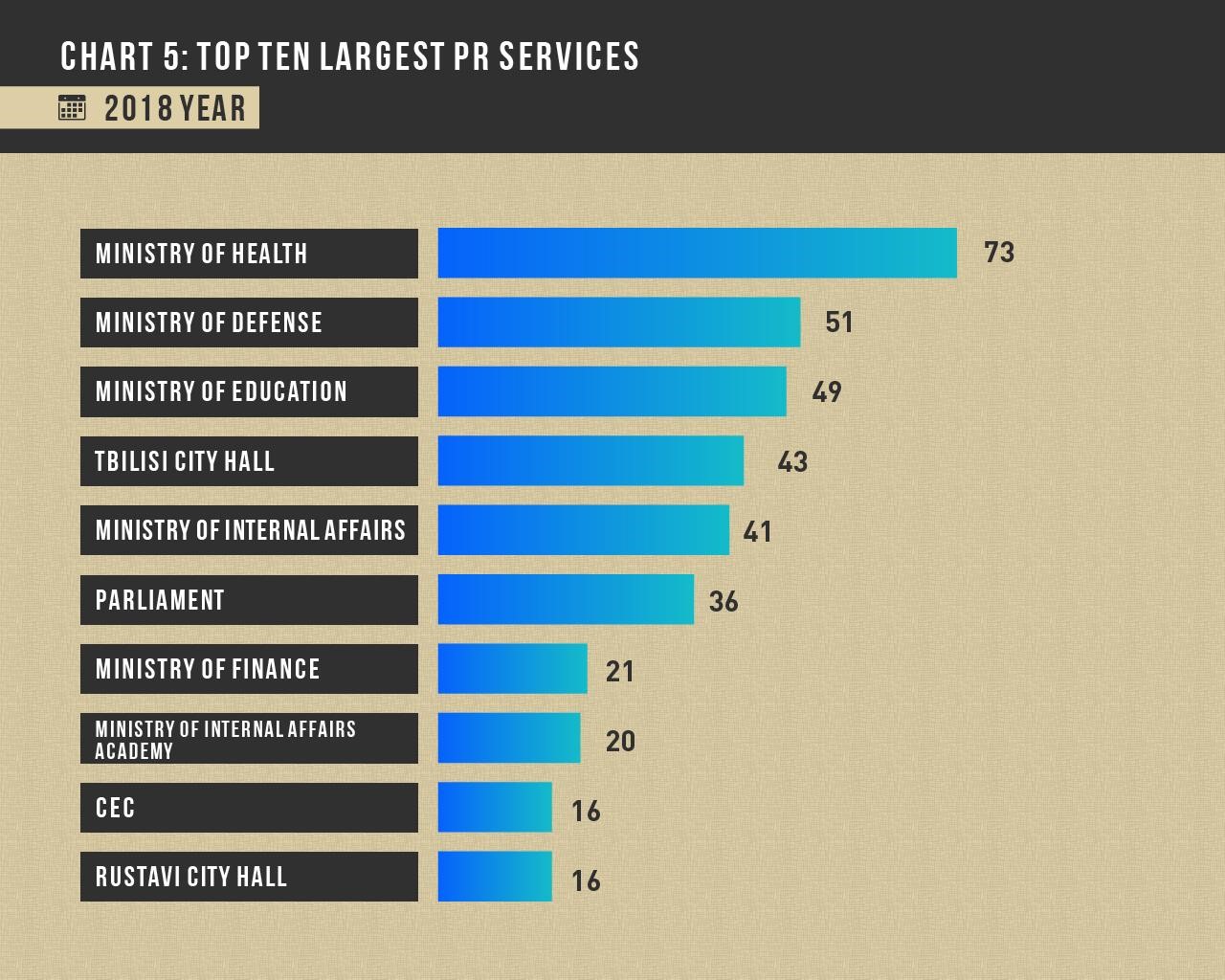 *The Top Ten is selected from 194 agencies

The Ministry of Defense of Georgia is the leading agency according to its expenditures on the remuneration of PR personnel, the Parliament of Georgia are the Ministry of Internal Affairs are slightly lagging back. 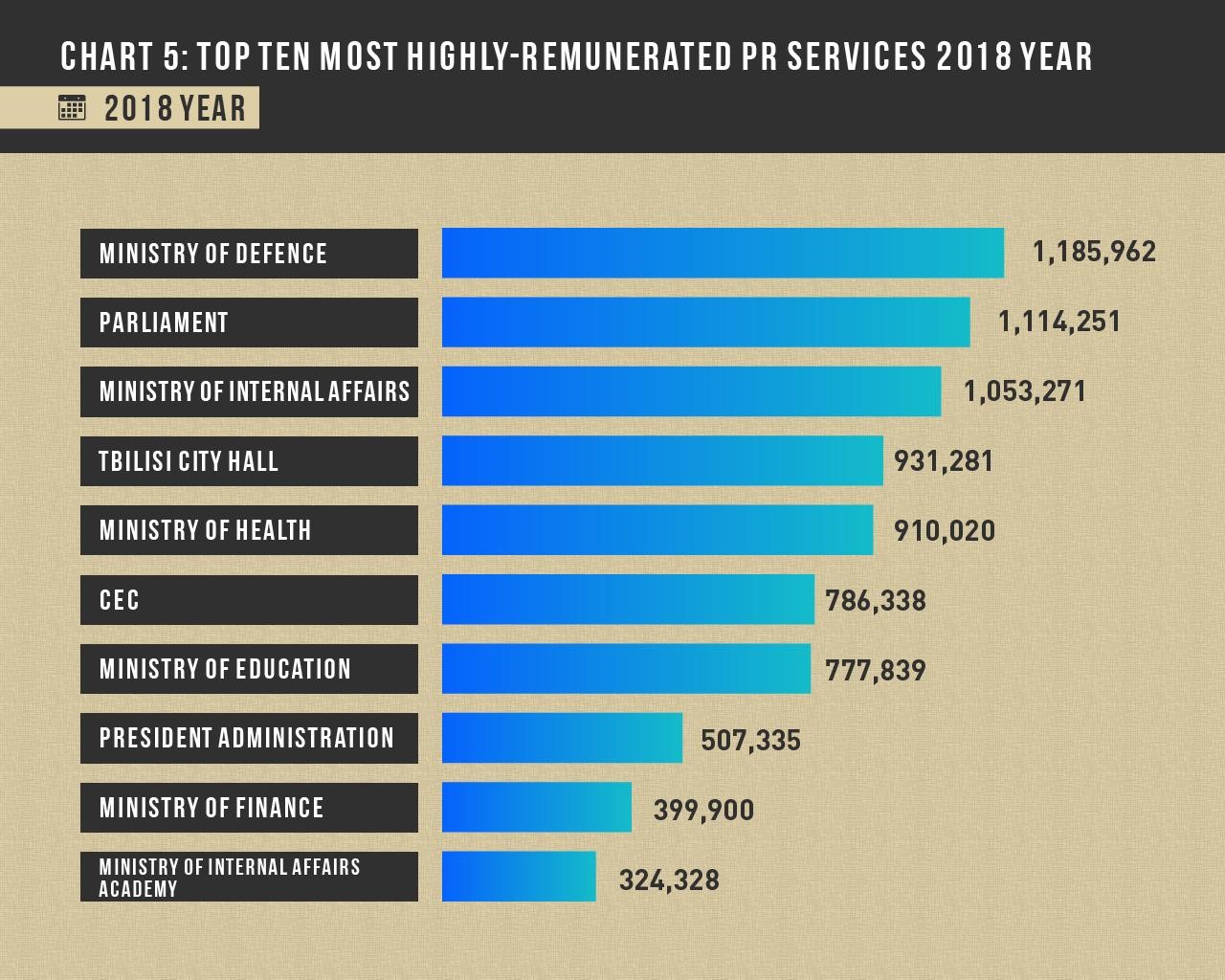 *The Top Ten is selected from 194 agencies Ministry of Defense

In the report published by Transparency International Georgia in 2018, that covered data inclusive in October 2017, the Administration of the Government of Georgia was on the leading position according to the number of public/media relations service personnel and the remuneration paid thereto. Then we obtained this information only through the court. Unfortunately, the current research does not include the Administration data as we failed to get hold of complete information from them irrespective of our multiple efforts.

The data retrieved this year (we requested data for 2017 and 2018) the information regarding 2017 was dramatically different from that of the last year. Specifically according to the letter, retrieved by Transparency International Georgia in November 2017, Public/Media Relations Department had 67 employees, while according to data provided in 2019 the Administration had 42 fewer personnel in the same 2017 - only 25. Information about the remuneration was also inconsistent. Specifically, according to 2017 letter, in total 2 724 525 GEL was expended for their remuneration, while the new letter says that 84 886 GEL was paid for the same period - the difference makes 2 639 639 GEL. 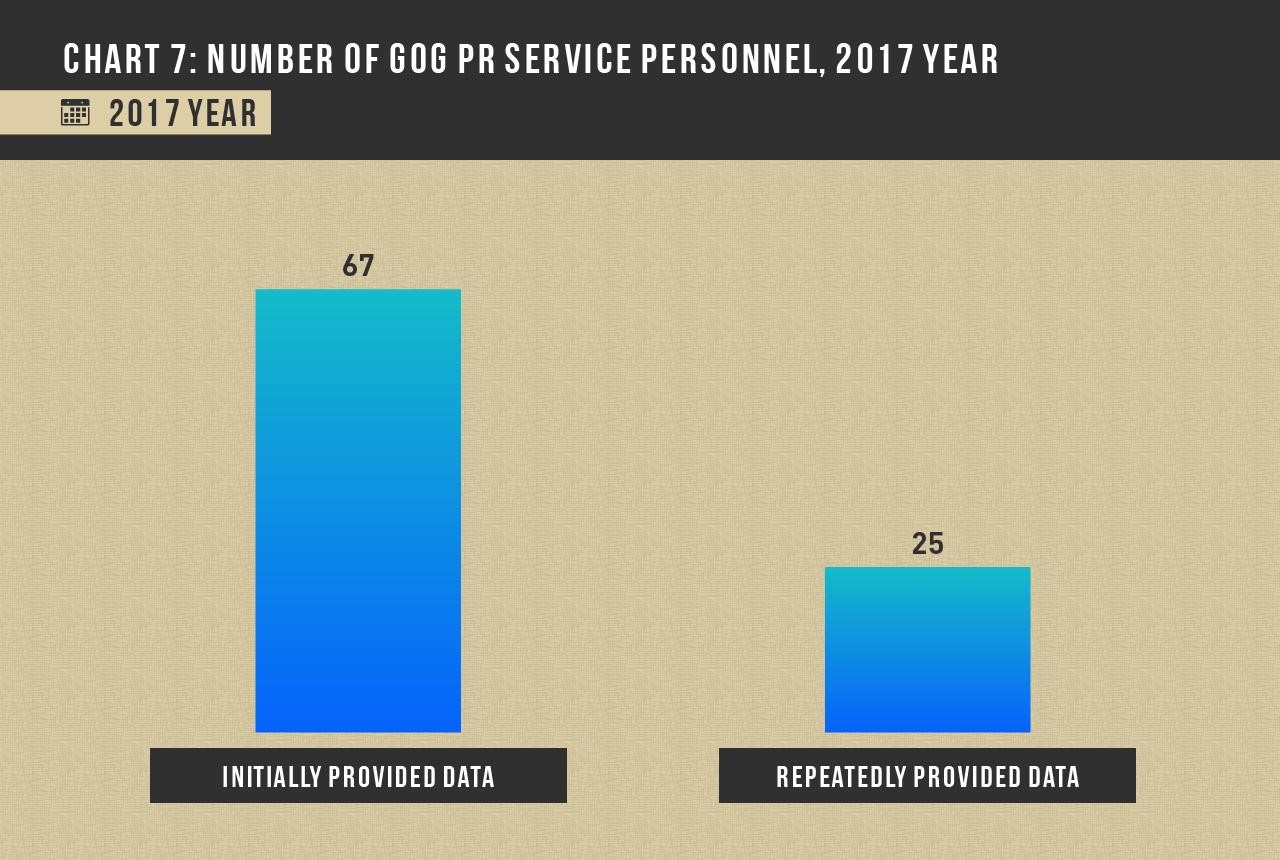 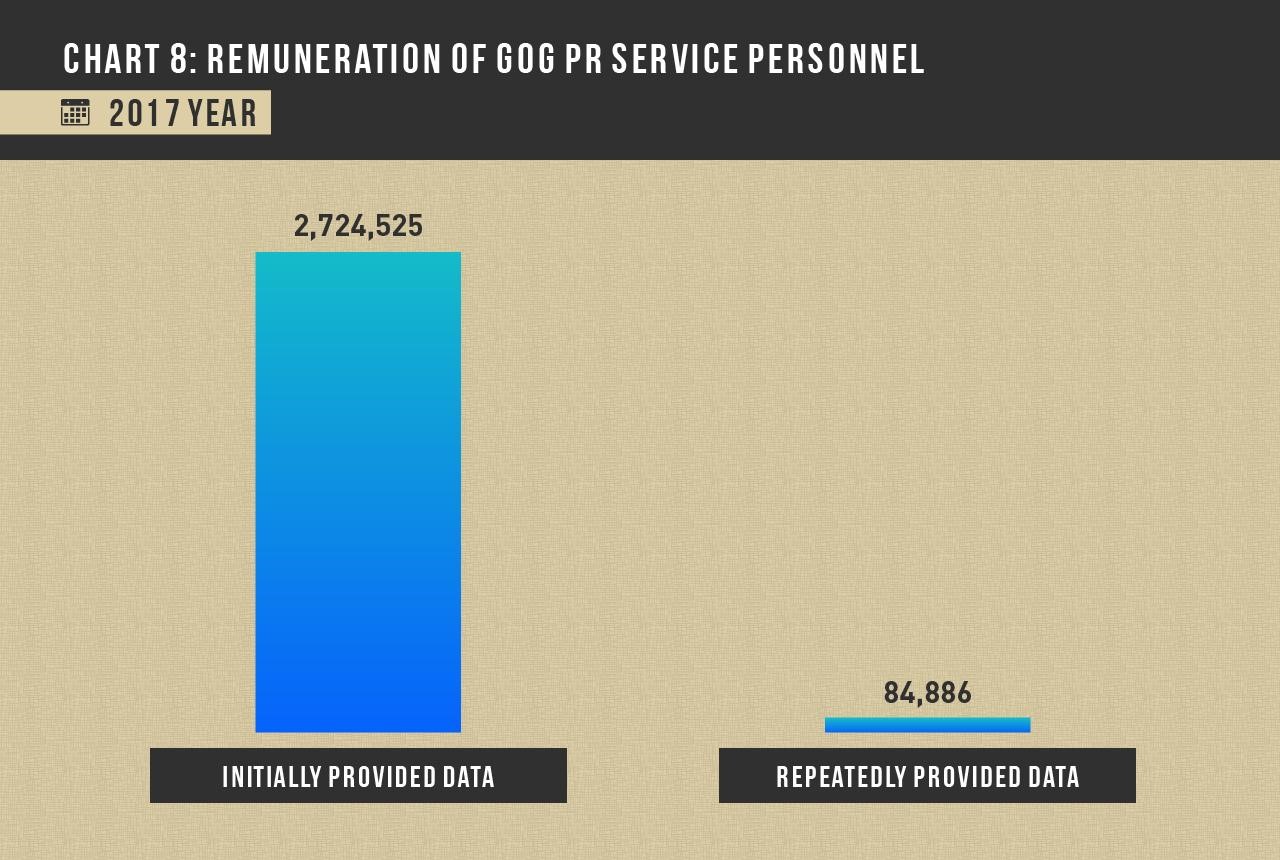 We requested explanations from the Administration with regard to the foregoing. The Agency responded that the letter of 2018 contained information about the "whole subdivision", while the letter dated 20 February, 2019 focused on the employees, who directly deal with Media and "this very situation conditioned the difference between provided data."

This explanation is not convincing due to the following reasons:

We tried to double-check the erroneous data provided thereby with Administration; however we were told during our telephone conversation, that they made a mistake and sent data just for one month. We requested sending correct data anew in writing, but received no answer irrespective of the expiry of statutory time limits set forth for the provision of public information.

[1] The research covers data from the agencies of all three branches of the government - legislative, executive and judiciary, local self-governance authorities and LEPLs.

[2] The data cover the number of both full-time and contract employees.

[3] Whereas the Administration failed to provide us with data about the number of PR service personnel and their remuneration the date from Administration for 2013-1016 are also excluded from chart to demonstrate general trend.