In an article published on February 17, 2020, TI Georgia reviewed the activity of Serpantine LLC – which belongs to the mother of Giorgi Zedelashvili, the former First Deputy Secretary of the State Security and Crisis Management Council – which received more than GEL 105 million from the state budget in the years 2013-2019. The company belonging to Giorgi Zedelashvili’s mother continues to win public tenders without competition. During four months alone, in January-April 2020, Serpantine won tenders worth GEL 7,249,170.06.

In the present article, we will also review the activities of family members of Giorgi Zedelashvili and their business partners, which might be connected with possible corrupt deals. During the research, we also identified common interests of Giorgi Zedelashvili and Irakli Shikhiashvili, the former Chairperson of the Tbilisi City Council, in connection with hydroelectric power plants.

Serpantine retains a dominant position in the Kakheti region in 2020

Serpantine, the company belonging to Giorgi Zedelashvili’s mother, continues to obtain large public tenders in 2020. In January-April 2020, the company took part in 17 tenders and won 16 of them. The company obtained all the tenders from the municipalities of Telavi, Kvareli, and Dedoplitskaro. The total value of the tenders won since the beginning of 2020 alone has amounted to GEL 7,249,170.06.

The total amount that Serpantine has received from the state in the years 2013-2020 already exceeds GEL 112 million.

On May 3, 2018, the then Prime Minister, Giorgi Kvirikashvili, signed two decrees of the Government of Georgia (no. 961 and no. 963). The decrees concerned the rules of operation of two different hydroelectric power plants, although what they had in common was Giorgi Zedelashvili’s evident business interests in both power plants. 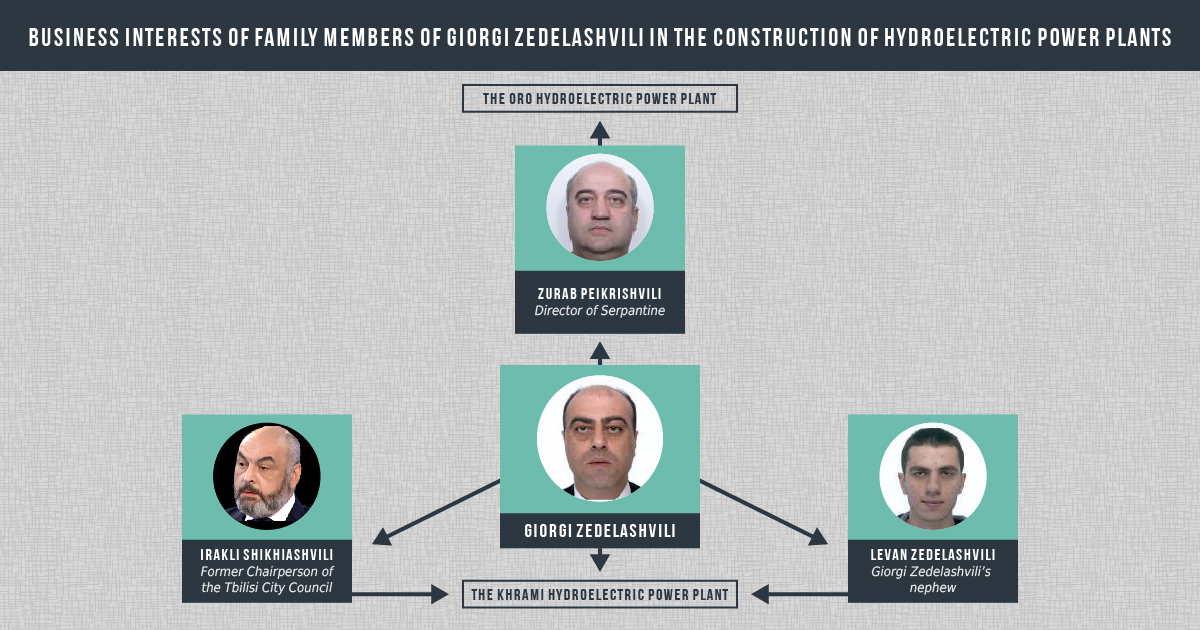 The links of this company with Irakli Shikhiashvili are also confirmed by the fact that in the same year Irakli Shikhiashvili’s son, Levan Shikhiashvili, filed an application, as an authorized representative, requesting registration of changes to the registered data of New Technology 2014 LLC in the Public Registry.

The Government of Georgia, by decree no. 961 of May 3, 2018, approved the conclusion of a memorandum of understanding among the Government, New Technology 2014 LLC, and JSC Electricity System Commercial Operator regarding the Khrami Hydroelectric Power Plant. The memorandum was concluded on June 6, 2018. New technology 2014 LLC took an obligation to construct the Khrami power plant with the capacity of 1.13 megawatts and to put it into operation.

On October 30, 2018, the Prime Minister, Mamuka Bakhtadze, signed decree no. 2024 of the Government of Georgia on “giving consent on the transfer of state-owned immoveable property to New Technology 2014 LLC with the right of superficies and leasing and on its privatization through direct sale”.

On April 3, 2017, Zurab Peikrishvili, the director of the Serpantine company, which belongs to Giorgi Zedelashvili’s mother, founded Energy Investing and Trading Company LLC.

The Government of Georgia, by decree no. 963 of May 3, 2018, transferred immoveable property to this company on the condition that the timeframes for construction of the Oro Hydroelectric Power Plant and for putting it into operation that had been agreed on by the memorandum of understanding concluded on February 27, 2018, would be met. The Oro power plant with the capacity of 1.1 megawatts was put into operation by decree no. 1802 of the Government of Georgia of August 13, 2019, which was signed by the Prime Minister, Mamuka Bakhtadze.

It is noteworthy that the director of both companies, New Technology 2014 LLC and Energy Investing and Trading Company LLC, is one and the same person, Davit Chikovani.

Tenders won by the family business of Irakli Shikhiashvili

When Irakli Shikhiashvili’s interest in the construction and management of the Khrami Hydroelectric Power Plant became evident, he no longer held a public office. However, TI Georgia has found out that while he was in the public service, his family’s business participated actively in public procurements: On February 14, 2013, the Anj-Metal company, in which Irakli Shikhiasvili’s spouse, Ekaterine Asatiani, owns a 25% stake, obtained a tender worth GEL 679,999.47 (SPA130000724) from the Tbilisi City Hall. At the time of obtaining the tender, Irakli Shikhiashvili was a member of the Tbilisi City Council.

On September 30 of the same year, the Anj-Metal company won a tender worth GEL 2,161,000 (SPA130016136) from the Tskaltubo Municipality, in a situation when its two competitors had been disqualified. At that time, Irakli Shikhiashvili already held the position of the Chairperson of the Tbilisi City Council.