The foul odour caused by the processing of fish has been bothering the population of Poti for years. The fish odour appears during the season of processing anchovy which lasts from November until February. The population occasionally stages protest rallies but the problem remains unresolved. Transparency International Georgia published research on this issue in 2018, which determined connections between the fish processing facilities and the persons closely related to the Georgian Dream party. 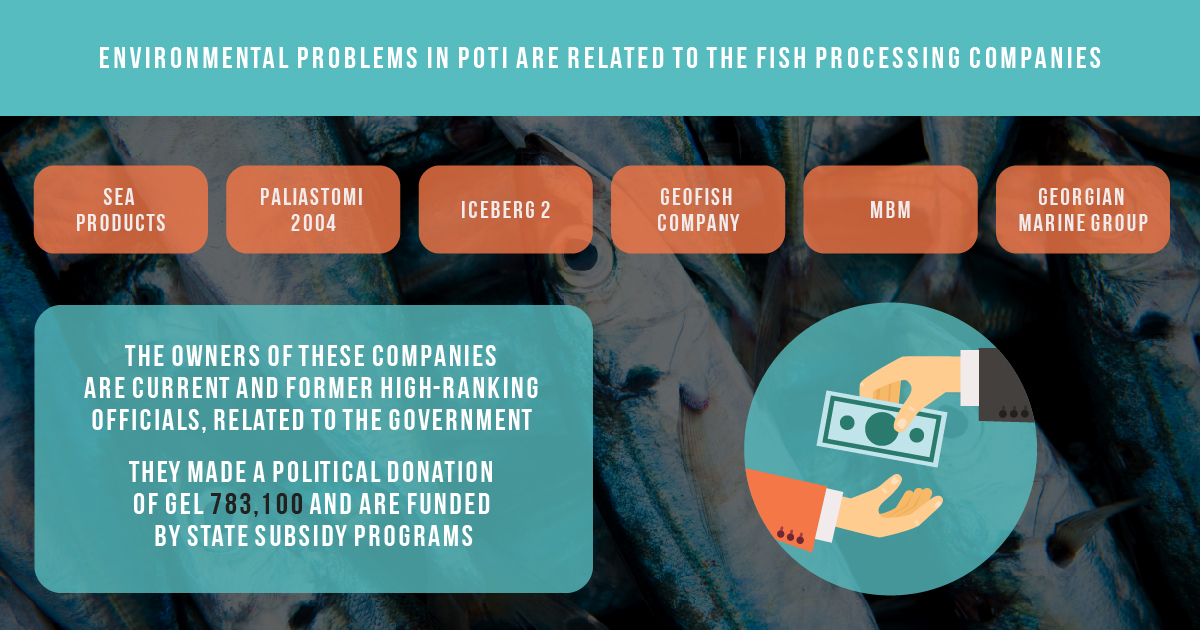 The companies with fishing licenses

The National Environmental Agency issued 9 licenses for fishing in Black Sea water area, which was divided up for 5 companies. These companies are related to each other, as well. 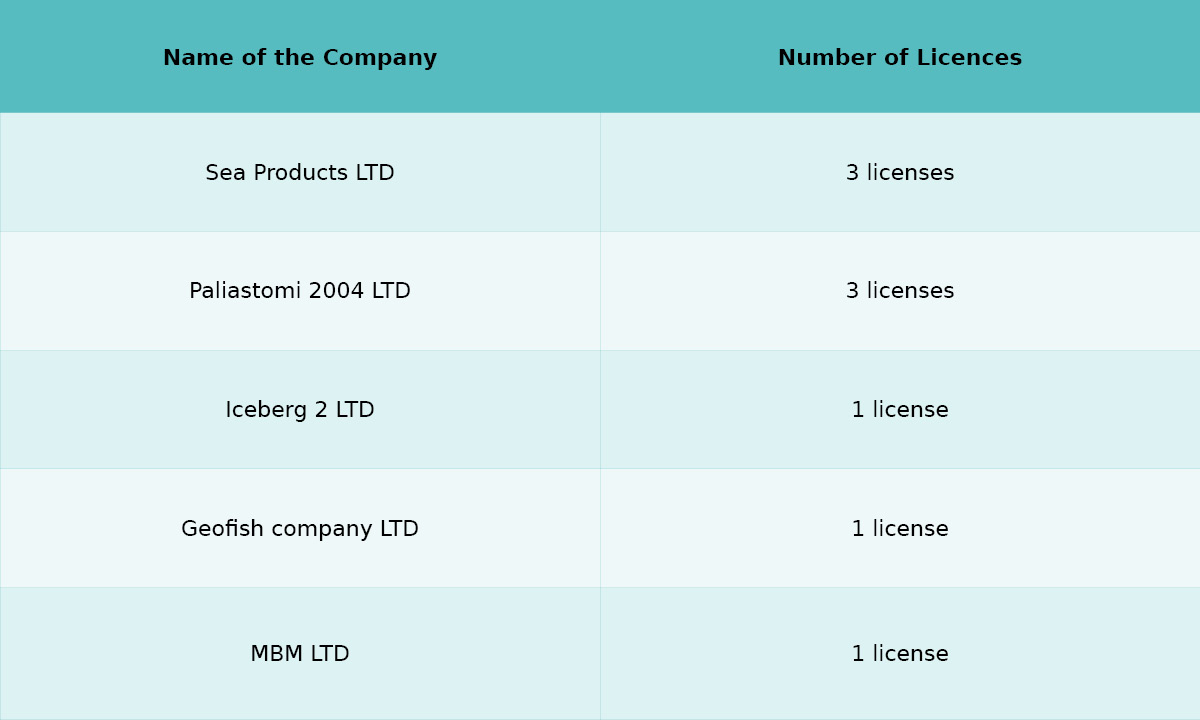 The fishing licenses were issued for these companies in 2006 through an auction. The terms of these licenses were extended in 2019, after the expiry dates, that substantially limited the possibility of new participants appearing in the fishing industry and put the existing companies in the monopoly position.

It is noteworthy that the companies holding the fishing licenses own the mutual company as well - A G S Group LTD. The Director of this company is Kakhaber Lataria, who at the same time, owns 25% of shares in ICEBERG 2 LTD. The shares are distributed the following way:

According to the National Statistics Office of Georgia, all five companies holding the fishing licenses are medium-sized enterprises. According to the National Statistics Office data, a company is considered to be the medium-sized enterprise, when the number of employees lies between 50 to 250 and an average annual turnover falls between GEL 12 to 60 million.

Subsidies received from the state programmes

The government assists the companies that operate in fishing and fish refining business in two ways - on the one hand, it provides funds through the Enterprise Georgia program, and on the second hand, issues the credit guarantees within the Credit-Guarantee Scheme for the companies that are unable to obtain finances from banks and the state transfers the funds in specific bank accounts for ensuring the debts of beneficiaries.

The state assisted two companies within the framework of the Credit-Guarantee Scheme - GEL 472,500 was transferred to the bank account to secure the loan of Georgian Marine Group Ltd, and GEL 945,000 was secured for the loan of Paliastomi 2004 Ltd. The aforementioned amounts must be repaid to the state budget gradually, in parallel with repayment of the company’s financial liabilities with the bank.

These companies will receive a co-funding of GEL 7,814,262 through the Enterprise Georgia program, from which they have received a funding of GEL 14,685 so far. 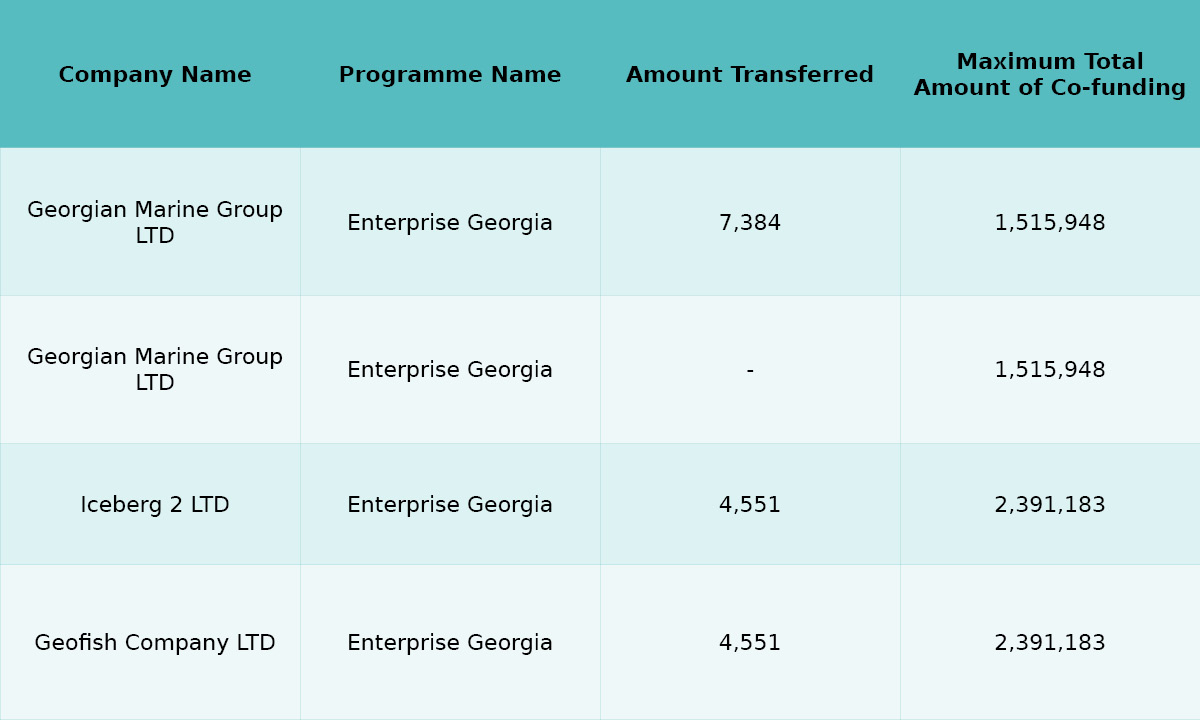 Connections of current and former officials, political party donors and people related to the Georgian Dream with fishing and fish processing companies

Georgian Marine Group LTD is a company registered on December 3, 2020. The Director of the company is Davit Tsitsilashvili, while Paliastomi 2004 LTD owns 100% of shares.

Davit Tsitsilashvili donated GEL 120,000 in total to the Georgian Dream party in 2016 and 2020. His late father, Guram Tsitsilashvili, is a political donor, too. He donated GEL 50,000 to the National Movement in 2012 and GEL 60,000 to the Georgian Dream in 2016. Guram Tsitsilashvili is a business-partner  of Gocha Kurdgelia, the current mayor of Poti, while he owned the shares together with Irakli Khakhubia - the current MP of Georgia, in the company that held the fishing license. - Iceberg 2 LTD.

The Director of Paliastomi 2004 LTD - Paata Zhgenti is a former deputy head of MIA Tbilisi Police Department. The company’s shares are apportioned as follows: Sulkhan Papashvili - 6.67%; Giorgi Kukhaleishvili - 60%; Sea Products LTD - 33.33%. Sulkhan Papashvili is a former head of the State Protection Special Service. He is the brother of a businessman Lasha Papashvili and is engaged in business as well.

25% of the shares of Iceberg 2 LTD is owned by the MP of Georgia (Khobi and Senaki Majoritarian) Irakli Khakhubia. The shares of the company are also owned by: Kakhaber Lataria - 25%; Tengiz Sarishvili - 25% and a company registered in Turkey - Koptur Balikcilik Gida Sanai Nakliat Ve Ticaret Limited Shirket - 25%. Irakli Vekua is the Director of the company, who is the manager of Irakli Khakhubia’s shares at the same time.

It is noteworthy that Irakli Khakhubia, other shareholders and the director of the company have donated GEL 438,100 to the political parties in the past. GEL 131,000 to National Movement, GEL 187,000 to the Georgian Dream and GEL 120,000 to Salome Zourabichvili.

64% of the shares of Geofish Company LTD is owned by Iceberg 2 LTD, whose Director is Irakli Vekua. Aleksandre Tavadze owns 10% shares of the company, while the remaining 26% is owned by Gugolplex LTD.

Gugolplex LTD was registered in September 2020. Its sole owner is Maria Kokhia, who has dual citizenship of Georgia and the Russian Federation, while Tamar Gakharia is the Director.

36% of MBM LTD is owned by a company - Meis Su Urunleri Avciligi Ve Ietishtiriciligi, which is registered in Turkey, while the remaining 64% of shares are equally divided among Besik and Merab Kharabadzes. Merab Kharabadze is also a political donor. He donated GEL 15,000 to Presidential Candidate - Salome Zourabichvili.

The owners, directors and other persons related to the companies mentioned above have donated GEL 783,100 to various political parties at various times. 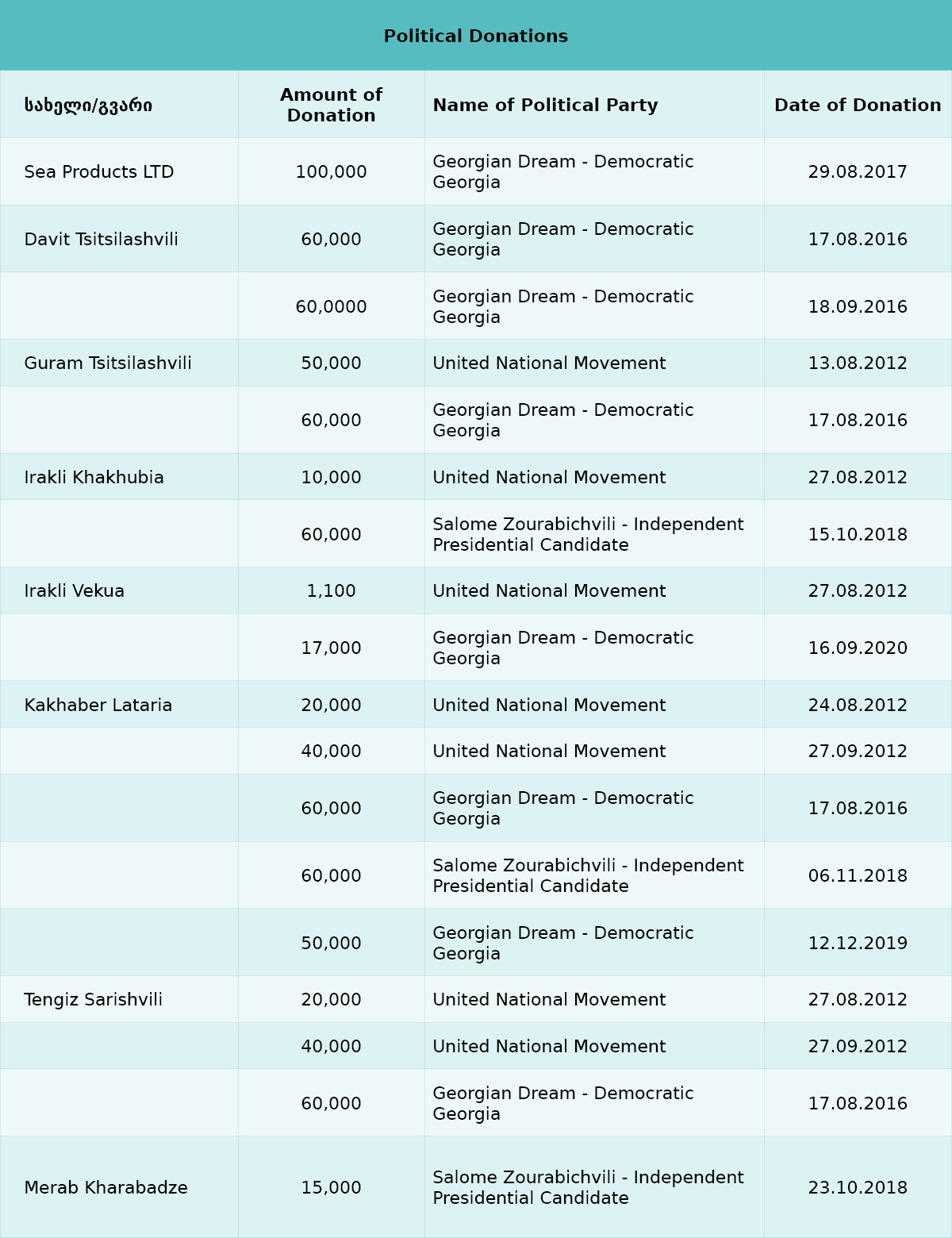 The Environmental Supervision Department has examined activities of the fish and sea products processing facilities several times since 2017 and identified the following violations during the inspection:

According to Poti City Hall, water purification plants have been installed in the above mentioned facilities - Evaporator, which cleanses the pouring water and controls the fish odor at the same time. This equipment cools down the water and reduces the PH indicator (6.5 - 8.5) to the standards defined by the legislation of Georgia. According to the information provided by the Ministry of Environmental Protection and Agriculture of Georgia, the above-mentioned structures are ineffective and do not ensure the purification of water, in addition, the fish processing facilities still have not fulfilled their obligations and do not meet the requirements determined by the legislation of the environmental protection.

The companies with the fishing licenses were fined for the violation of the license terms and requirements in 2019-2020. The sum of these fines accumulated to GEL 15,000:

According to Transparency International Georgia, the actions carried out by the government may be considered to be ineffective as they do not ensure protection of the environment and ecological security. Although companies are occasionally subject to financial sanctions, environmental problems remain unresolved until now.

Therefore, the Ministry of Environmental Protection and Agriculture should conduct a detailed inspection of the facilities and determine specific actions required to avoid pollution of the environment and to reduce the spread of foul odor down to minimum. It is important for the state to take all the measures defined by the law to ensure that the facilities fulfill their obligations and comply with environmental  regulations.

On the other hand, a conflict of interest emerges between the current/former public officials, political party donors and existing problems: The political connections of the company owners may be an impediment to solving the problem.