On 25 September 2015 the Russian energy company Gazprom reported on its  website that the General Director of the company Alexey Miller held a working meeting with the Minister of Energy and Natural Resources of Georgia Kakha Kaladze. According to the press release, the parties discussed perspectives of cooperation in the natural gas sector. The issues of providing Georgia with natural gas and transit of gas through Georgia to Armenia were also addressed.

The matter has become a subject of public discussion since the emergence of the news. Members of the governing Georgian Dream coalition and the government linked acquiring gas from Gazprom to diversification of energy sources and a pragmatic energy policy. The statements made by officials were, however, contradictory. For example, on October, 9 the Minister of Energy and Vice Prime Minister Kakha Kaladze stated that all countries consider diversifying their energy sources. “Here the issue is not only about getting extra amount from Russia: we are actively working with Iran on this issue as well,” - said Kaladze.

In his comment on negotiations with Gazprom, the Minister of Economy and Sustainable Development Dimitri Kumsiashvili agreed with Kakha Kaladze, stating that diversification of import and export is very important to the country.

The Deputy Minister of Energy Ilia Eloshvili said that the gas import is already diversified, as along with transit resources, Georgia has access to Azerbaijani gas, which is a long-term strategic partner.

The statement of the Prime Minister Irakli Gharibashvili was radically different from that of Kaladze. During his unplanned visit to Azerbaijan on October, 10 the Prime Minister said: “There is no talk of diversification or finding substitute to Azerbaijani gas. This is complete nonsense and irresponsible politicians should not mislead the public”.

Transparency International (TI) Georgia followed up with the the Ministry of Energy on the issue of natural gas import with a letter of inquiry. According to the Ministry’s response, the price of gas for households is USD 120 per 1000 cubic meters and USD 143 for thermal power stations(households and thermal power stations are supplied gas at a lower price. Accordingly, these two groups are classified as social segments). In case of commercial gas, there is no universally defined tariff and private companies individually negotiate price and volume of gas with suppliers, independently from the government.

In 2014, the total volume of gas supplied on the Georgian market was 2.193 billion cubic meters, 2.183 billion of which was imported gas. 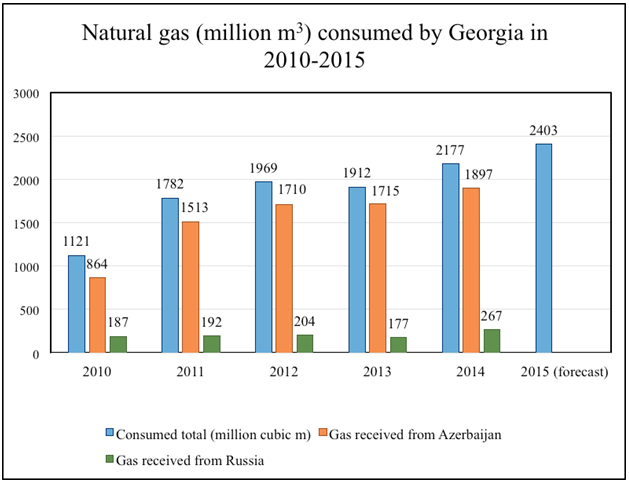 The statement of General Director of Socar Georgia is particularly interesting in the context of increased demand for gas. He denied comments of Georgian officials, including Kaladze, and said that Azerbaijan can satisfy Georgia’s entire demand. This assumption is further solidified by an unplanned and unexpected visit of Georgian Prime Minister to President Aliyev. Aliyev’s statements during his visit in Georgia are also noteworthy: “Azerbaijan has large gas reserves, [...] for at least 100 years from now, Azerbaijan will be able to supply both itself, and neighboring countries, as well as the European states with large volumes of natural gas.” According to Minister of Energy, Kakha Kaladze, Ilham Aliyev did not mean  commercial gas in his statement. The Vice Prime Minister stated several times that Azerbaijan cannot satisfy demand on the commercial market and this is the reason why Georgian government reached out to Gazprom.

TI Georgia, naturally, does not have an opportunity to prove or disprove whether Azerbaijan truly has the capacity to satisfy the Georgian market demand. Azerbaijan has never publically stated that it is not able to satisfy the Georgian demand. Contrary, Socar has made comments suggesting the opposite. Therefore, it is not clear, why Georgia’s Ministry of Energy has not attempted to launch negotiations with Azerbaijan, Georgia’s strategic partner, on meeting the increased demand; especially, considering that the Minister now emphasizes the importance of satisfying the demand, rather than energy diversification. The statements of Georgian and Azerbaijani officials show that no meeting to discuss these issues has been held.

In terms of natural gas supply to Georgia, it must be noted that Georgia will receive additional gas after Shah Deniz Stage 2 becomes operational. On 17 December 2013 Kakha Kaladze stated: “After the pipe becomes operational, we will receive additional gas, which is of critical importance to our country.” According to the existing agreement, Georgian can purchase 5% of transit gas at a discounted price, which in case of full operation of the pipe is additional billion cubic meters. However, Shah Deniz Stage 2 will become operational in 2017.

According to the annual report (p. 73) of the Georgian National Energy and Water Supply Regulatory Commission (GNERC), last year 57% of all consumed gas was non-commercial (household and thermal power stations). Other 43% was used by commercial consumers, which individual subject buy individually from the natural gas provider.

According to the GNERC, to develop competition on the natural gas market, per the order N69 of 2007 by the Minister of Energy of Georgia, the gas market in Georgia has been divided into two parts: regulated part (social gas) and de-regulated part (commercial gas). As we can see, the commercial gas is beyond regulation, and therefore, the individual subjects can purchase gas from any of the suppliers based on individual negotiations. Because of increased demand on social gas, along with 10% received for transit of Russian gas to Armenia, Georgia annually received some amounts of gas from Russia, excluding 2013. Therefore, if there is a negotiation between Georgian and Gazprom on getting additional gas from the transit, the GNERC says that the additionally received gas will be used for social gas.

The increased demand for gas, naturally, has to be met. However, as mentioned above, the ongoing negotiations with Gazprom and contradictory statements of the government officials raise legitimate questions.

For example, if the demand for the commercial gas has increased on the market, why did the commercial entities not address the gas suppliers and ask for increase in supply, and why did the government get involved in this process? If the negotiation concerns acquiring additional gas from the transit, then this gas will most likely be used for social gas, as 10% received from gas transit now is used for meeting the demand on social gas. Therefore, it is not clear why the gas acquired this way applies to the commercial segment.

The issue became even more unclear after, in response to our request, TI Georgia received some clarifications from the Ministry for Energy. According to the Ministry:

Taking into account all of the above-mentioned, it is crucial that the government gives a full account to the public on its negotiations with Gazprom to ensure transparency of the process, and provides full and documented response to the existing questions.