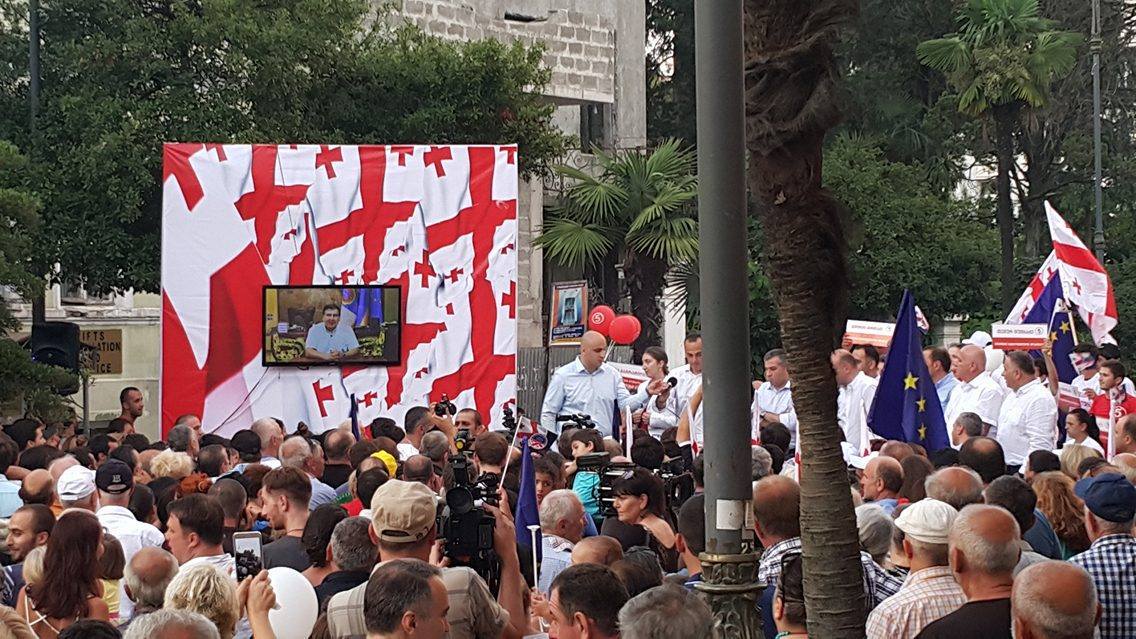 On July 31, 2016, political association of citizens United National Movement presented its majoritarian candidates for the Parliament of Georgia and for the Supreme Council of the Autonomous Republic of Adjara in Batumi. The event was held in the area adjacent to the party’s regional office. The party leaders gave speeches before the supporters, and, at the end of the presentation, the organizers of the assembly showed the activists a recording of a video address of Mikheil Saakashvili, the former President of Georgia and the current Governor of Odessa.

In the video address, the former president gave an overview of the events that had taken place in Adjara in May 2004, thanked the local population for the support they had provided at that time, and also called on those present to once again support the UNM in the 2016 parliamentary elections.

This was not the first time that Mr. Saakashvili had been involved in public meetings held as part of the UNM’s pre-election campaign: he had also urged citizens to support the former ruling party on July 11 in Marneuli and on July 14 in Akhalkalaki. Similarly to Batumi, the party also presented its majoritarian candidates in Kvemo Kartli and Samtskhe-Javakheti.

The former President of Georgia has held the position of the Governor of Odessa in Ukraine since 2015. His appointment was preceded by his adopting the Ukrainian citizenship. Therefore, since that time, Mr. Saakashvili is no longer a citizen of Georgia.

The Election Code of Georgia (Subparagraph F, Paragraph 4, and Article 45) unequivocally prohibits foreign nationals from taking part in pre-election canvassing. And the statements made by Mikheil Saakashvili at the party event of July 31 constituted obvious agitation. According to the legislation, an appeal to citizens in favor or against electoral subjects/subject candidates, as well as any public act that contributes to or interferes with their election and/or contains signs of pre-election campaigning, including participation in organizing/conducting pre-election events, storage or dissemination of electoral materials, working on supporters’ lists, representing political parties, is regarded as pre-election agitation.

We call upon the Supreme Election Commission of the Autonomous Republic of Adjara to study the aforementioned facts at the nearest session and to take measures envisaged by law.