The public expects more coverage of social issues from the media

According to the latest survey, the public considers reporting on social issues as the primary function of journalists. The survey was conducted for Transparency International Georgia by Caucasus Research Resource Centers (CRRC) from April 28 to May 6 in 2015.

The number of respondents who consider reporting on social issues as the primary function of journalists has increased by 11% (to 67%) compared to 2013. The increased importance of social issues coverage in the eyes of the public may be attributed to the recent sharp change in the national currency’s exchange rate and the resulting spotlight placed on economic issues related to it.

The number of respondents who believe journalists should be informing the public of government decisions has increased by 7% compared to the public opinion survey conducted for us by CRRC in 2013.

Even though the survey shows a clear increase in public interest for social issues, it revealed a 10% reduction in the number of respondents who place importance on the coverage of issues faced by individuals marginalized or neglected by society. Compared to the 2013 survey, the number of respondents who believe journalists should be reporting on social inequality has also decreased. 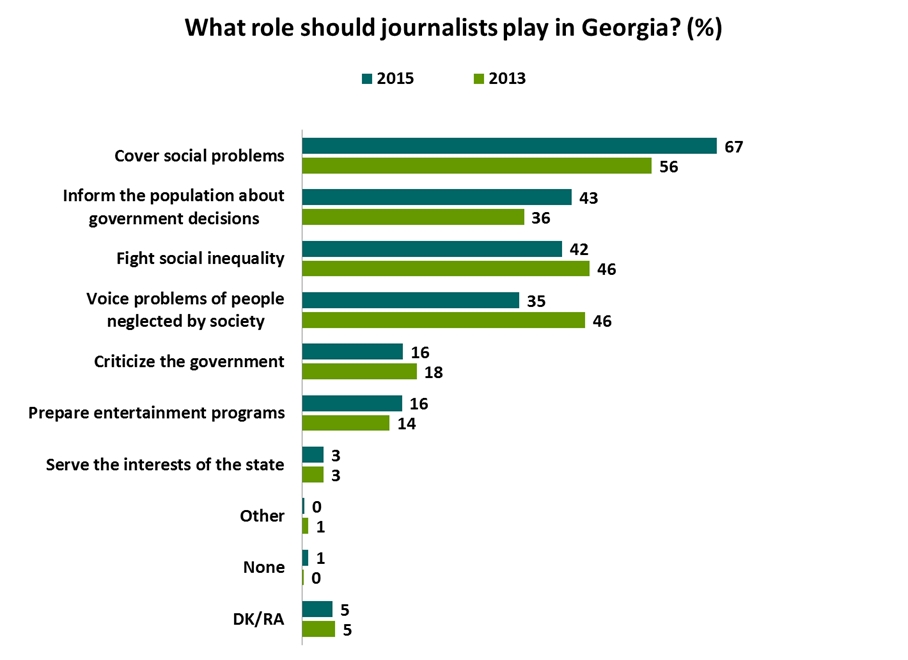 Compared to 2013, more people believe that politics affects media activities. 51% of respondents agree with the statement that politics determines what is currently being covered by the media and how. Meanwhile, the number of people who believe that the media dictates the rules of the game to politicians has decreased. This trend could be attributed to 2013 and 2014 being election years in Georgia, with political coverage taking up most of the media‘s attention.

Media studies have shown that journalists often refrain from in-depth coverage of election related issues out of fear of upsetting the political balance and instead limit themselves to simply stating different existing political opinions. This observation could be linked to an 8% increase in the number of respondents (from 24% to 32%) who consider the current news coverage by journalists to be superficial. 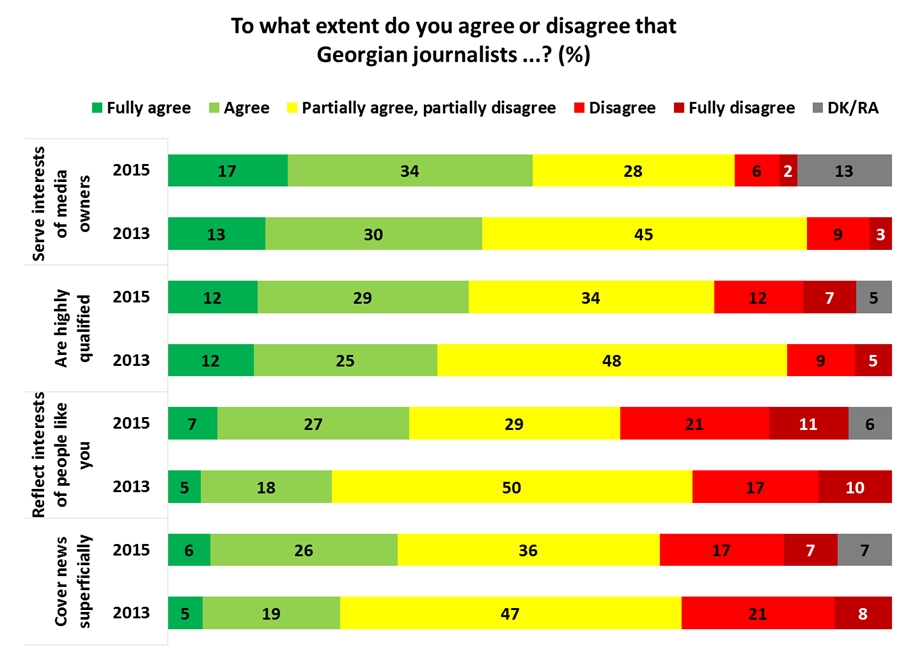 The number of respondents who believe that journalists serve the interests of media owners has increased by 8% (from 43% to 51%) compared to 2013. This trend is particularly noteworthy in the context of media monitoring conducted during the 2013 presidential and 2014 local government elections, which did not find any outstanding violations committed by the media in favor of any specific political party. The monitoring also did not find cases of harassment of journalists by media owners during election reporting. The owners of TV companies Imedi and Maestro, however, did make newsroom staff changes after local government elections were over. Staff changes at Maestro TV in particular placed a spotlight on the confrontation between journalists and media owners. In the summer of 2014, leading Maestro journalists started leaving the TV station. This culminated in October 2014 when the dismissal of Nino Zhizhilashvili, head of Maestro TV’s newsroom, was followed by the resignation of 20 other newsroom journalists. The journalists explained their decision by pointing at attempts by the company’s owners to interfere with the channel’s editorial policy.

Even though the number of daily internet users has increased by 4% since 2013, 46% of the population remains completely offline.

Internet in Georgia is most often used for social networking (75%) and as a source of information (41%). However, only 4% of the population receives their television signal via the internet.

38% of the population receives their television signal via satellite dishes, while 25% uses cable broadcasting. According to surveys conducted by the National Democratic Institute (NDI), television remains the main source of information for the majority of the population (87%).

32% of respondents receive their television signal via antennas. This segment of the population will be most affected by the changes following the country’s transition to digital broadcasting. Even though 90% of respondents are informed about this transition, 49% remain unprepared for the change.