The spread of the COVID-19 has had a major impact on Georgia's 2020 state budget. The economic crisis caused by the pandemic has significantly reduced budget revenues. At the same time, health and social care spending have been increased. On June 24, many amendments were made to the Law on State Budget for 2020, as a result of which a virtually new, so-called anti-crisis budget was adopted. Transparency International Georgia has already published an analysis of the 2020 anti-crisis budget.

In parallel with the amendments to the Law on State Budget, the Ministry of Finance also changed the program plans for revenues and expenses for the first six months of 2020 (January-June). Accordingly, the changed planned figures at the end of June were as close as possible to the actual figures for the first half of the year. Therefore, it is interesting to see the impact of the pandemic on the 6-month plan of revenues and expenses of the initial budget for 2020 (approved in December 2019).

Transparency International Georgia studied the basic features of the six-month performance report of the 2020 state budget and presented specific recommendations for remaining challenges. Taking these recommendations into account will make a budgetary policy more sustainable and effective.

The Government of Georgia (GoG) forecasts a 4% economic downturn by 2020. Prior to the spread of the COVID-19, the current year's economic growth forecast was 4.5%.

According to the preliminary data of the National Statistics Office of Georgia (Geostat), in the first half of this year, the Georgian economy shrank by 5.8%. If we look at the quarters, the economy grew by 2.2% in January-March and fell by 12.6% in April-June.

The economic downturn and some temporary tax breaks imposed due to the pandemic have reduced the budget's 6-month plan for Tax Revenues by GEL 468 million. The new plan – GEL 4,570 million was fulfilled by 100.4%. The plan for the second quarter of value added tax (VAT) revenues was reduced the most - by GEL 357 million.

The 6-month plan for Grants was reduced by GEL 8 million and amounted to GEL 46 million, however, due to the increased foreign aid, the budget received a GEL 77 million of grant in 6 months and the plan was fulfilled by 169%.

The 6-month plan for the Disposal of Non-Financial Assets (privatization) was reduced by GEL 1.5 million to GEL 56.5 million. The updated plan was fulfilled by 101.2%.

The 6-month plan for the Decrease of Financial Assets (returned loans) was reduced by GEL 8.4 million to GEL 54.3 million. The updated plan was fulfilled by 146%, the loan of GEL 79 million was repaid.

Budget Receipts also include government borrowing. Due to declining revenues and rising expenses, the GoG has increased its debt by 2.6 times in 2020. The GoG will borrow a total of GEL 8 billion in 2020. The 6-month debt plan has also been increased. According to the initial budget, taking of GEL 1,430 million of debt was planned in 6 months, while the updated plan increased this number by more than GEL 1 billion - to GEL 2,541 million. The new plan was fulfilled by 112%.

Overall, the 6-month plan for the Receipts increased by GEL 761 million to GEL 7,661 million. The updated plan was fulfilled by 104.6%, the budget received GEL 349 million more than planned. 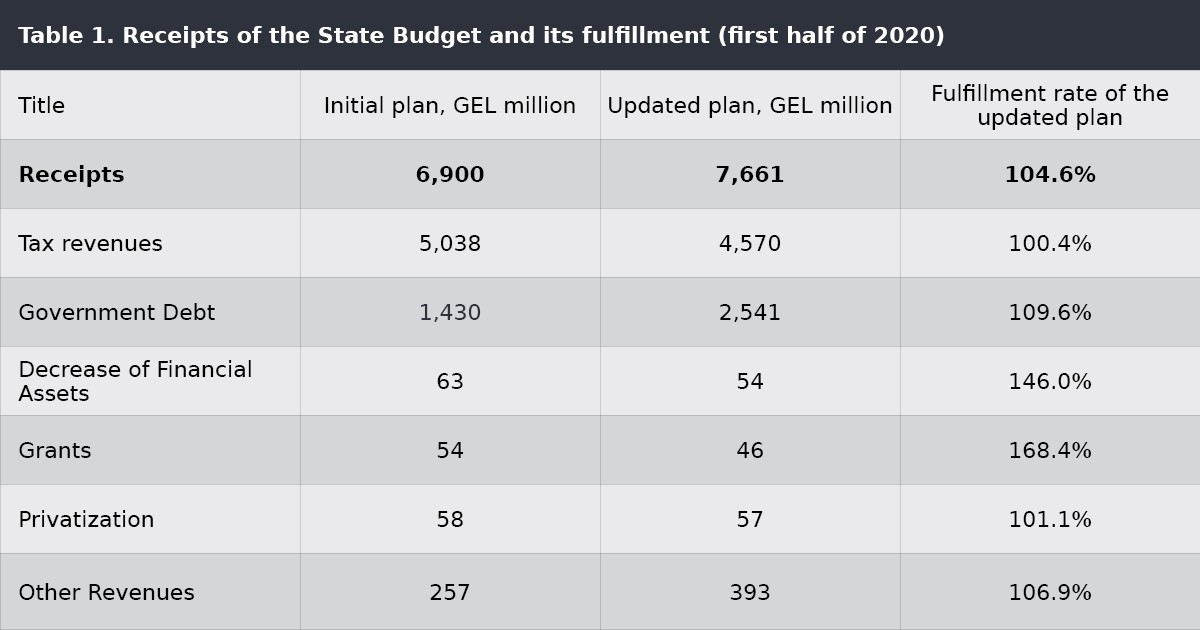 Increased expenses due to the pandemic affected the 6-month plan of Expenditures that was increased from GEL 6,978 million to GEL 7,422 million. However, the updated plan was implemented by 92.9% and GEL 6,897 million was actually spent.

The 6-month plan for the Procurement of Goods and Services was also characterized by low performance. The initial plan was increased by GEL 43 million to GEL 748 million. However, in fact GEL 625 million was spent and the plan was fulfilled by 83.5%.

It is interesting to see a breakdown of the Procurement of Goods and Services, as these are exactly the costs that the pandemic should have had a significant impact on, especially in the second quarter of this year.

Maintenance expenses of transport, equipment and military weapons were significantly reduced. In the first 6 months of 2019, GEL 66.4 million was spent in this direction, as for 2020, this number was decreased by GEL 20.3 million to GEL 46.1 million. In 6 months, the representation expenses were decreased by 48% and amounted to GEL 4.8 million, which mainly includes hosting of foreign guests.

Although part of the state institutions worked remotely, the office expenses were decreased by only GEL 3.6 million (7.2%) in the second quarter of 2020, compared to the same period of 2019.

The 6-month plan for health care expenses was increased from GEL 595 million to GEL 737 million. A new program, the management of the COVID-19, was added to the existing healthcare programs. GEL 55 million was allocated for this program in January-June, but only GEL 40 million was spent.

As in previous years, the amount allocated to the Universal Healthcare Program was insufficient. The initial plan for 6 months was GEL 434 million, which was increased by GEL 89 million to GEL 523 million. In fact, GEL 522 was spent. With the amendment to the 2020 State Budget, the annual funding for the Universal Healthcare Program has been increased from GEL 757 million to GEL 802 million. However, this increase will not be enough either, as GEL 690 million has been spent as of 31 August. By the end of the year, the cost of universal health care is expected to reach GEL 1 billion.

The 6-month plan of another important component of the Budget Expenditures - the Acquisition of Non-Financial Assets (also known as capital/infrastructure expenses), was reduced by GEL 118 million to GEL 826 million. The updated plan was fulfilled by 99%.

The 6-month plan for the Increase of Financial Assets rose by GEL 318 million. The increase was due to the accumulation of funds on the budget balance. However, due to the large amount of foreign aid, the balance increased by almost 5 times than planned and the 6-month plan of the Increase of Financial Assets was fulfilled by 303%.

The last category of the Expenditures is the Reduction of Liabilities that covers state liabilities coming from the loans taken in previous years. Initially, it was planned to repay the debt of GEL 506 million in 6 months. The plan was reduced to GEL 480 million and was fulfilled by 99.6%. 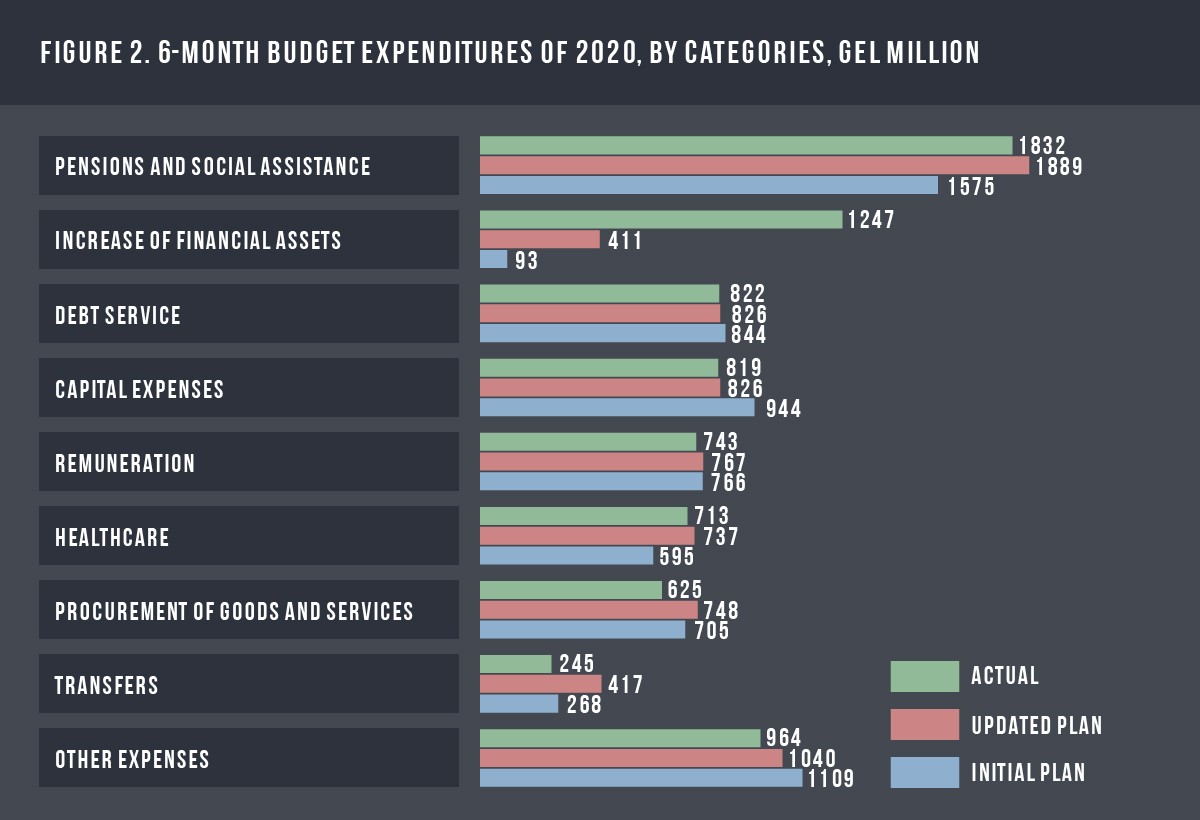 GEL 924 million of the budget deficit[3] was planned for the first half of the year. Under the updated plan, this number was increased to GEL 2,061 million, while the actual deficit was GEL 2,308 million. The increase in the deficit was due to the decline in revenues and the increase in expenses caused by the economic crisis.

For this year the budget deficit is planned to be GEL 7 billion. Consequently, in the second half of the year, if the budget expenditures are fully utilized, the deficit will be much higher than in the first half of the year, which will contribute to some macroeconomic instability on other equal terms. Especially challenging is the stability of prices and the exchange rate of GEL.

By the end of 2020, the GoG will borrow more than GEL 8 billion, but at the same time it will repay the previously taken debt of GEL 1 billion. As a result, this year the government debt will increase by GEL 7 billion to GEL 27.6 billion, which will be 54.8% of projected GDP (up 60% is allowed by Georgian legislation). The government will not spend GEL 2.5 billion this year from the debt taken in 2020. 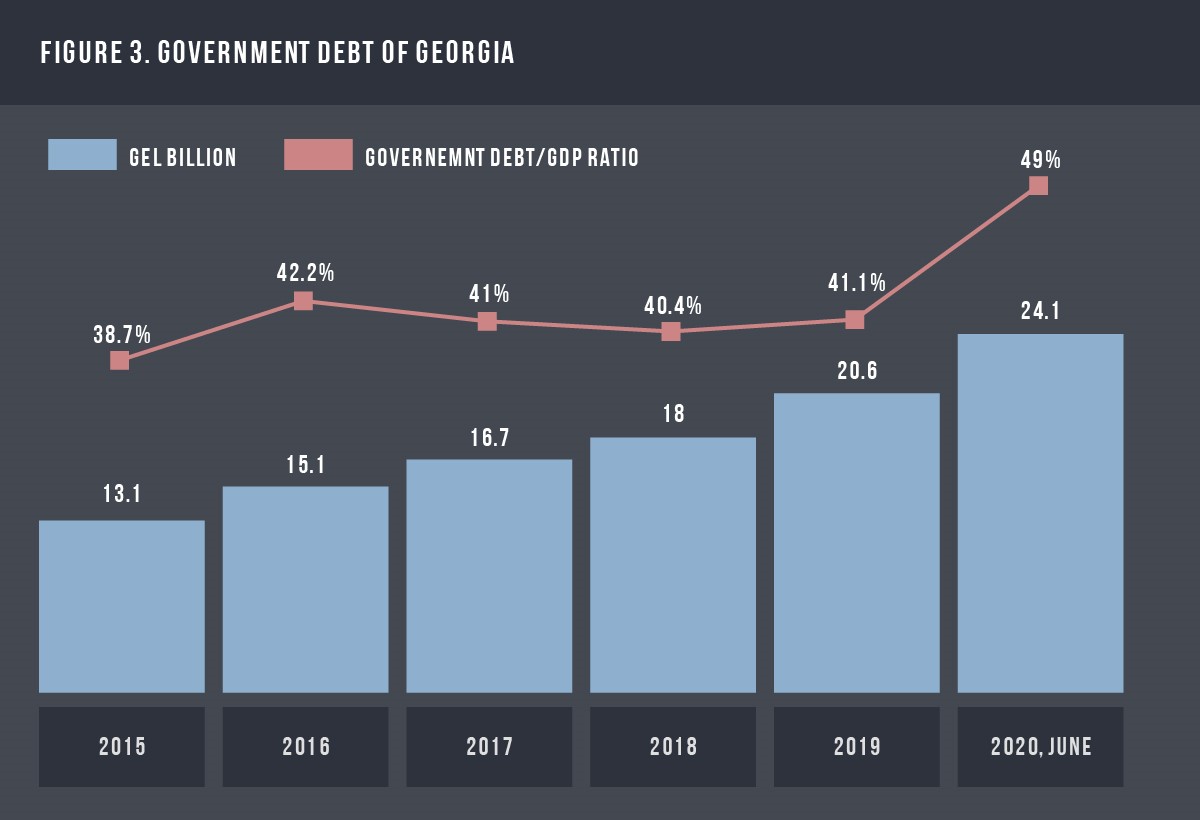 The damage caused by the pandemic led to the creation of new spending programs in the state budget. Programs were created in 3 areas: healthcare, social assistance and business subsidies. In the first half of 2020, GEL 460 million was allocated for new programs linked with the COVID-19 of which GEL 370 million was spent. 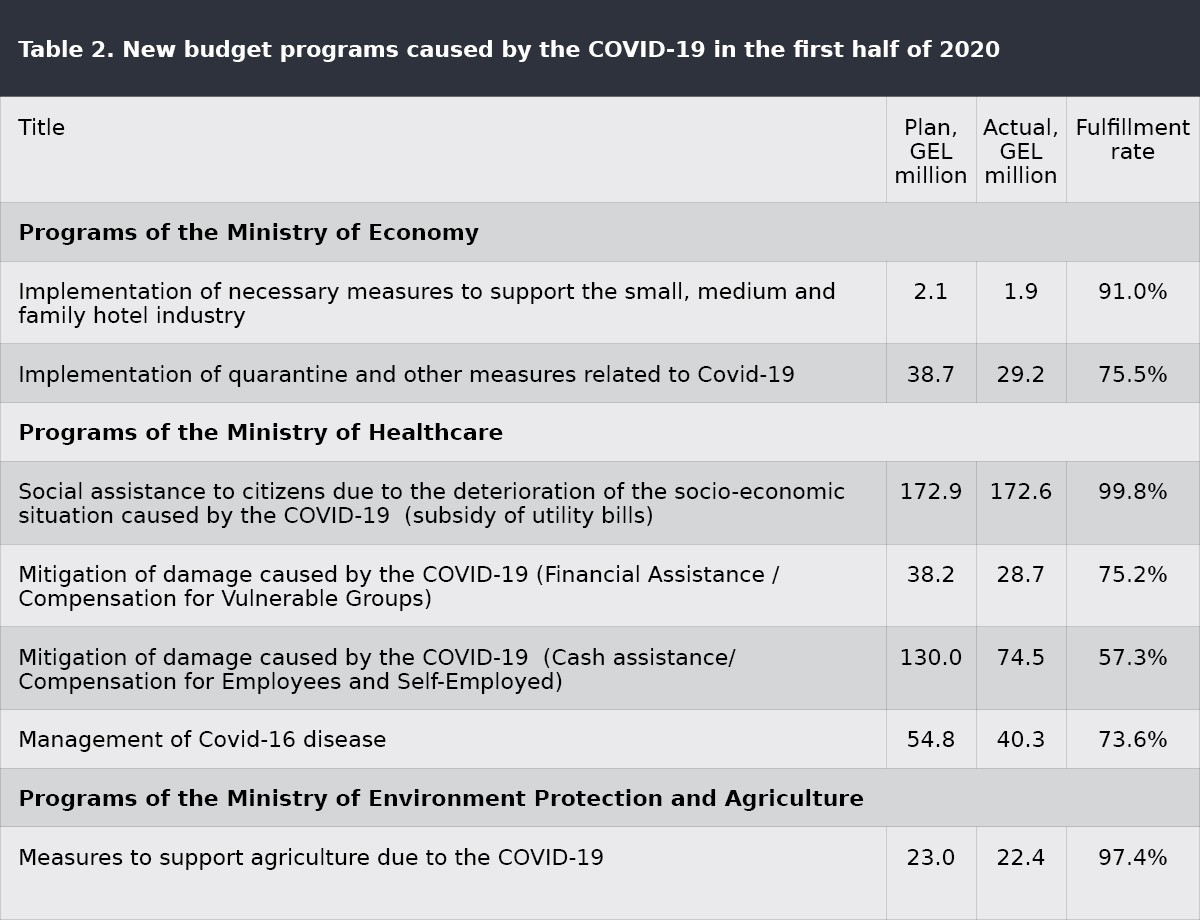 VII. Public institutions and programs expenses which have been significantly altered by the COVID-19 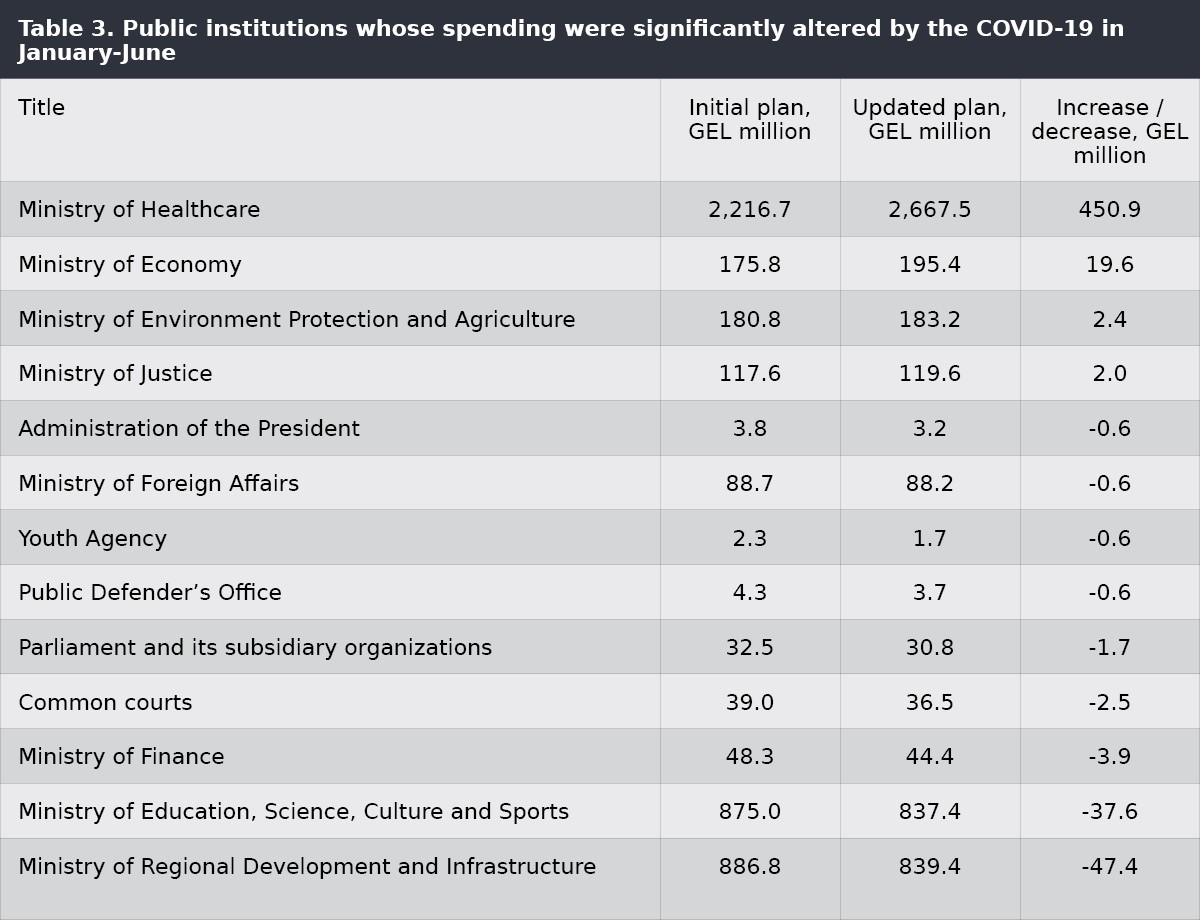 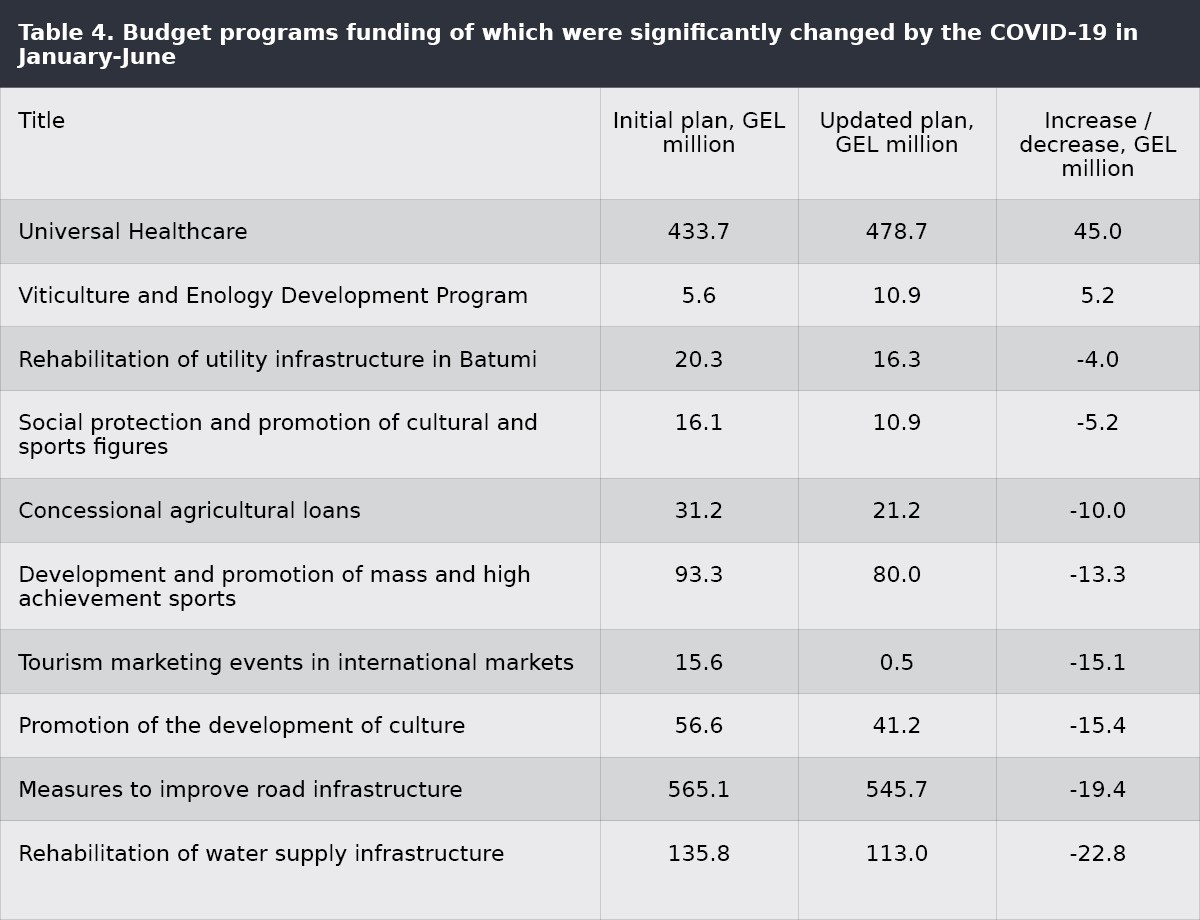 VIII. Public institutions and programs with the lowest fulfillment rates

After the spread of the COVID-19 in Georgia, government institutions began to make some savings. Although quarterly spending plans have changed since June, procurement of goods and services that were not an urgent need have been suspended since March. Agencies had low rates of implementation of the 6-month plan in terms of Procurement of Goods and Services and Acquisition of Non-Financial Assets.

Among all public institutions, the Office of the State Inspector spent the least compared to its 6-month plan - 54.8% of the plan. Then comes the Cabinet of the National Security Council with 59% fulfillment of the plan.

The Central Election Commission spent 63.6% of the planned amount in 6 months. More specifically, only GEL 502 thousand was spent out of the allocated GEL 5.3 million for the program of election activities. GEL 153 thousand was spent on the procurement of goods and services while the plan stood at GEL 3.9 million.

Table 6 shows the programs and sub-programs for which the 6-month plans were implemented with less than 60%. The plans were completed by 0% or the money was not spent at all on 3 programs, namely: management of public clinics, Batumi bus project and Tbilisi solid waste management project.

Among the high-budget programs the 57.3% fulfillment of the 6-month plan of the financial assistance program for the unemployed as a result of COVID-19 is worth mentioned. GEL 130 million was allocated for this program.

[3] According to the Georgian legislation, the budget deficit a gross negative budgetary balance. Since the gross balance does not fully include revenues and expenses, the definition of the budget deficit used in this report includes change of liabilities or sum of lacking money, which was financed by taking new loans.