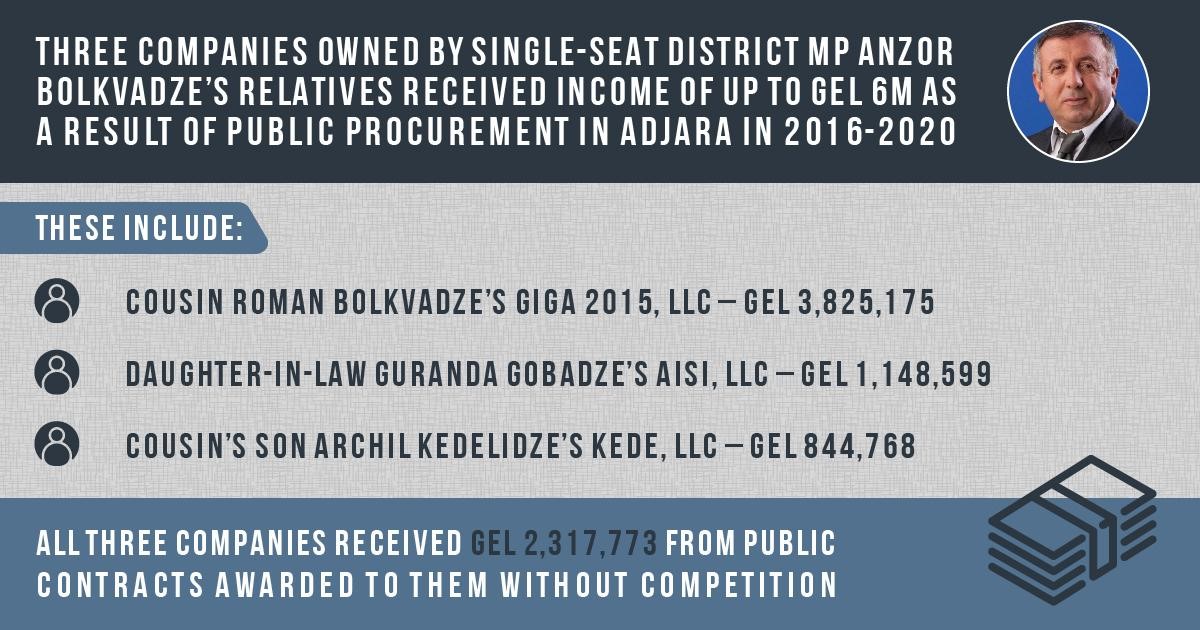 Transparency International Georgia continues investigating the economic interests of Anzor Bolkvadze, single-seat district MP from the high-mountain municipalities of Adjara (Khulo, Shuakhevi, Keda). In March 2020, our organization presented to the public a study that demonstrated that the single-seat district MP does not include in his asset declaration the complete information about his and his family members’ property, companies, and income received from these companies. We have asked the Civil Service Bureau to respond to the shortcomings we have uncovered.

Anzor Bolkvadze has been a single-seat district MP for 12 years. It is likely that Bolkvadze managed to ensure a steep increase of the assets and income of his family as well as relatives and other people close to him at the expense of state procurement precisely thanks to his close ties with the incumbent and previous governments and corresponding influence:

-          Over these years, his family registered the ownership of hotels in Beshumi and Goderdzi mountain resorts which come with tens of thousands of square meters of land attached to them;

-      In 2008, soon after his election as a single-seat district MP, his son Roland Bolkvadze was hired by the Adjara Roads Department. Currently, he [Roland Bolkvadze] is the head of the Logistics Service and a member of the tender commission;

-          In the past five years, through public tenders and simplified procurement procedures, the companies that belong to the MP’s relatives – Aisi, Keda, and Giga 2015, received up to GEL 6m from this department and other procuring organisations operating in Adjara. It is our opinion that the artificial creation of a non-competitive environment for these companies must become a basis for the inquiry by investigation bodies.

Below you will find detailed information about company assets, companies, and income received by these companies as a result of public tenders – all linked to Anzor Bolkvadze’s family and relatives.

Arsiani is a hotel at the Goderdzi resort that opened in 2020. Anzor Bolkvadze’s son and later his wife became the owners of the hotel and shareholders of the company after the initial owner of the hotel, Roland Shantadze, failed to fulfill his obligations: after the involvement of Bolkvadze’s family members, the Adjara Ministry of Finance and Economy rescheduled the fulfillment of these obligations for Shantadze twice. In exchange, Shantadze handed over the entire property on Goderdzi that he received via an auction to the company whose shares later became the property of Anzor Bolkvadze’s wife. These shares, as we wrote in the study published on 2 March 2020, were not indicated in Anzor Bolkvadze’s asset declaration.

In 2016, it was precisely Roland Shantadze who won the auction announced by the Adjara Ministry of Finance and Economy in which the autonomous republic sold a 300 sq. m building and 3,614 sq. m of non-agricultural land attached to it. The purchase price was GEL 46,950. The agreement was signed on 1 August 2016. It had a provision that the buyer was to open an eating establishment before 31 December 2017 but Shantadze failed to fulfill this obligation. Later on, the fulfillment of the conditions set out by the agreement was deferred for Shantadze until December 2018.

The State Audit Office pointed out the failure to fulfill the obligations. The document published in September 2019 (page 30) lists the shortcomings with regard to the management of state property on the territory of Adjara in recent years.

Roland Shantadze became an official business partner of Anzor Bolkvadze’s family in July 2017, after the auction of the Goderdzi property with attached conditionalities: this is exactly when Aisi Goderdzi, LLC was founded. Roland Shantadze and Anzor Bolkvadze’s son, Nodar Bolkvadze, together with another person, Raind Shantadze, became the company’s shareholders. Later, on 11 January 2019, Nodar Bolkvadze gave his shares to his mother, Tina Bolkvadze, as a gift. After that, on 30 July 2019, Shantadze mortgaged this property to take out a loan from Liberty Bank, JSC. The Bolkvadzes took out a loan from the same bank, too: the properties mortgaged were commercial properties of 194 sq. m, 107 sq. m and 88 sq. m in Batumi, at 57, Tbel Abuseridze Street, and a 68.9 sq. m greenhouse in Tbilisi, at 50, Samtredia Street.

One month after signing the mortgage, Roland Shantadze gave the entire property purchased at the auction in 2016 to Aisi Goderdzi, LLC as a gift.

Another company linked to the Adjara high-mountain single-seat district MP and which benefits significantly from the procuring organizations operating in the region is Giga 2015.

Since the appointment of Roman Bolkvadze to the director’s post, Giga 2015, LLC has been actively participating in public procurement and has been awarded contracts by the Adjara Roads Department. Under Anzor Kamadadze as its director, the company received the total of GEL 52,542 as a result of one tender and one simplified procurement procedure. After the appointment of Roman Bolkvadze as its director, during the period from 2016 and until 1 April 2020, the company’s income from public procurement increased by a factor of 73, amounting to the total of GEL 3,847,120. This includes GEL 1,290,493 (33 percent of the income) received as a result of non-competitive tenders and simplified procurement procedures. Giga 2015 won a total of 79 contracts.

In addition, 84 percent of the total amount received by the company – GEL 3,252,372, came from 69 procurements of the Adjara Roads Department. This circumstance is important because Anzor Bolkvadze’s son, Roland Bolkvadze has been working for this department for 10 years. Moreover, for years, he has been a member of the department’s tender commission, including during the procurement procedure which resulted in signing agreements with Giga 2015. Roland Bolkvadze was the head of the Service for Material Resources and Mechanisation at the department and is currently leading the Logistics Service there.

Benefits received by Giga 2015, LLC as a result of tenders held by budget-funded organizations operating in Adjara, 2016-2020: 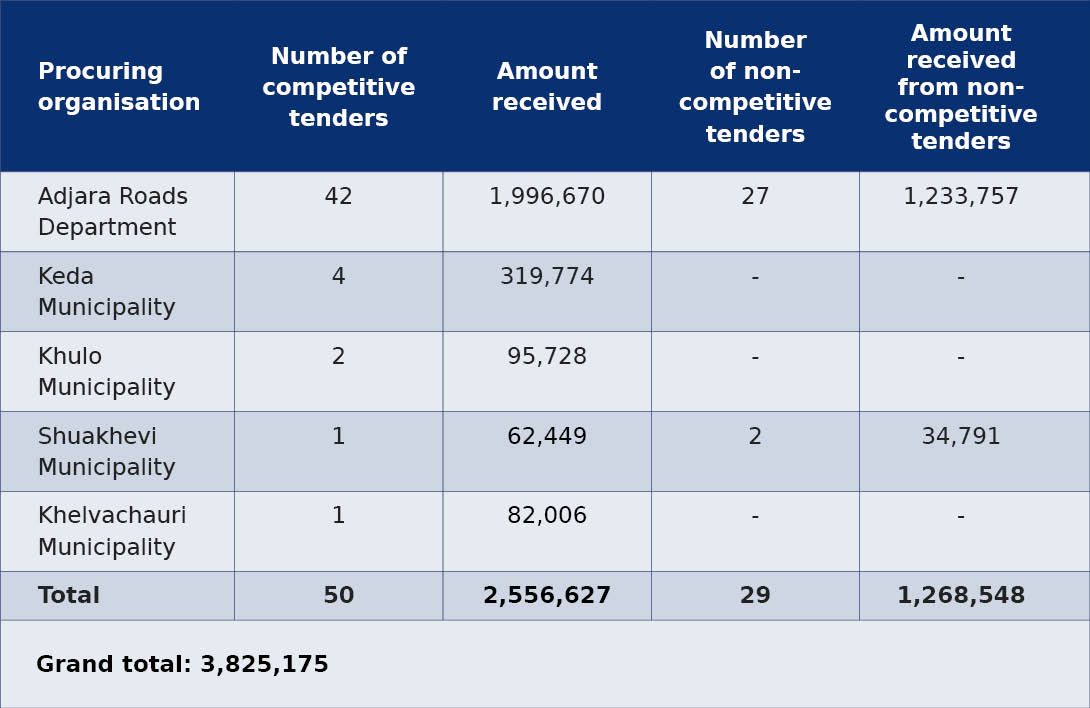 The table shows that that the company won 29 tenders without any competition, 27 of these were the procurements of the Roads Department from which the company [also] received one contract worth GEL 21,945 through a simplified procurement procedure.

Yet another company, Aisi, is linked to the people who are closely associated with Anzor Bolkvadze. It actively participates in the procurements announced by Khulo Municipality, winning without any competition in most cases.

The founder and director of Aisi, Rezo Ananidze, is also the director of Horizonti, a company in which Anzor Bolkvadze’s wife Tina Bolkvadze owns 100 percent of shares. The company’s legal registration address is a non-agricultural land plot owned by the MP in Khulo.

Aisi, LLC was registered with the Public Registry on 25 August 2014. Rezo Ananidze was the owner of 100 percent of shares of the company and its director. On 22 January 2018, Rezo Ananidze sold his 100 percent of shares to Roman Bolkvadze (Anzor Bolkvadze’s relative) and Elguja Abashidze for GEL 20,000. The latter also became the company director.

It is since 2018, after Anzor Bolkvadze’s relatives became the company shareholders, Aisi began to actively participate in public tenders. So far, the company has received GEL 1,148,599 from 11 public procurements, GEL 773,984 (67 percent of the income) of these as a result of six non-competitive procurement procedures. The company implements infrastructural work on the territory of Khulo Municipality.

Benefits received by Aisi, LLC as a result of procurements announced by Khulo Municipality and Adjara Roads Department

Aisi, LLC owns 2,824 sq. m of non-agricultural land in the village of Vashlovani in Khulo Municipality. The company’s concrete production plant is located there. The noise and dust caused by high-capacity transport moving on the territory of the plant bothers the residents of the nearby social housing – they have staged several rallies demanding to move the plant. The company temporarily suspended its operation in 2018. Elguja Abashidze, director of the company at the time, offered assurances that the company would try to reduce its damage to the environment. Later on, the company resumed operation. 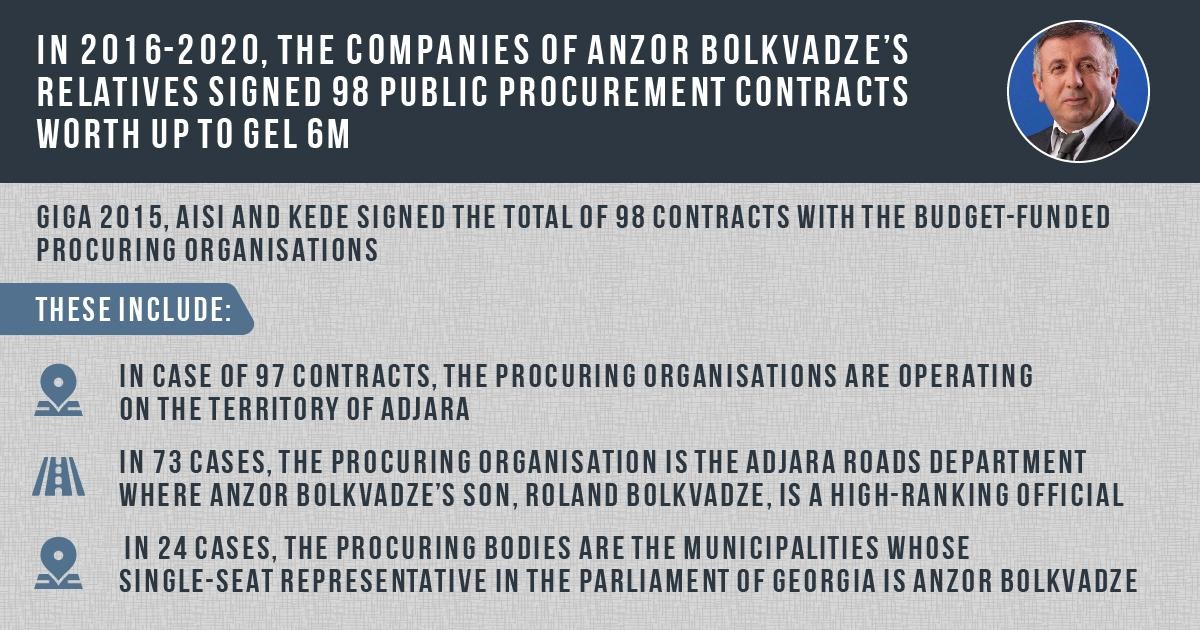 Benefits made by the company of Archil Kedelidze, son of the MP’s cousin, from the budget-funded bodies operating in Adjara

Archil Kedelidze is a son of Anzor Bolkvadze’s paternal cousin and a former director of Kurorti Beshumi, LLC. He was the head of this hotel since 8 July 2014 when the owner of 100 percent of shares of Khulo District Communal Services, LLC, Anzor Bolkvadze’s father, Nodar Bolkvadze, renamed the company and selected his sister’s grandson as its director. On 30 November 2018, Anzor Bolkvadze’s mother, Semie Bolkvadze, managed 100 percent of shares of Kurorti Beshumi, LLC after her husband’s death, transferred all the shares into the ownership of Archil Kedelidze’s brother, Giorgi Kedelidze, for GEL 1.

Archil Kedelidze manages 100 percent of shares of Kede, LLC. This company was founded in April 2016 and its director is Archil Kedelidze’s uncle, Vakhtang Kedelidze. In 2017, the newly established company won the tender worth GEL 95,974.27 announced by Keda Municipality, assuming the responsibility to build and reconstruct the water system in the villages Zendidi and Tskhemni. In addition, in 2018, the company was awarded eight more public contracts worth GEL 748,794.29 in total. It is noteworthy that in two of these tenders Kede, LLC was the only bidder – both non-competitive tenders whose total worth amounted to GEL 275,242.39 were announced by Khulo Municipality. 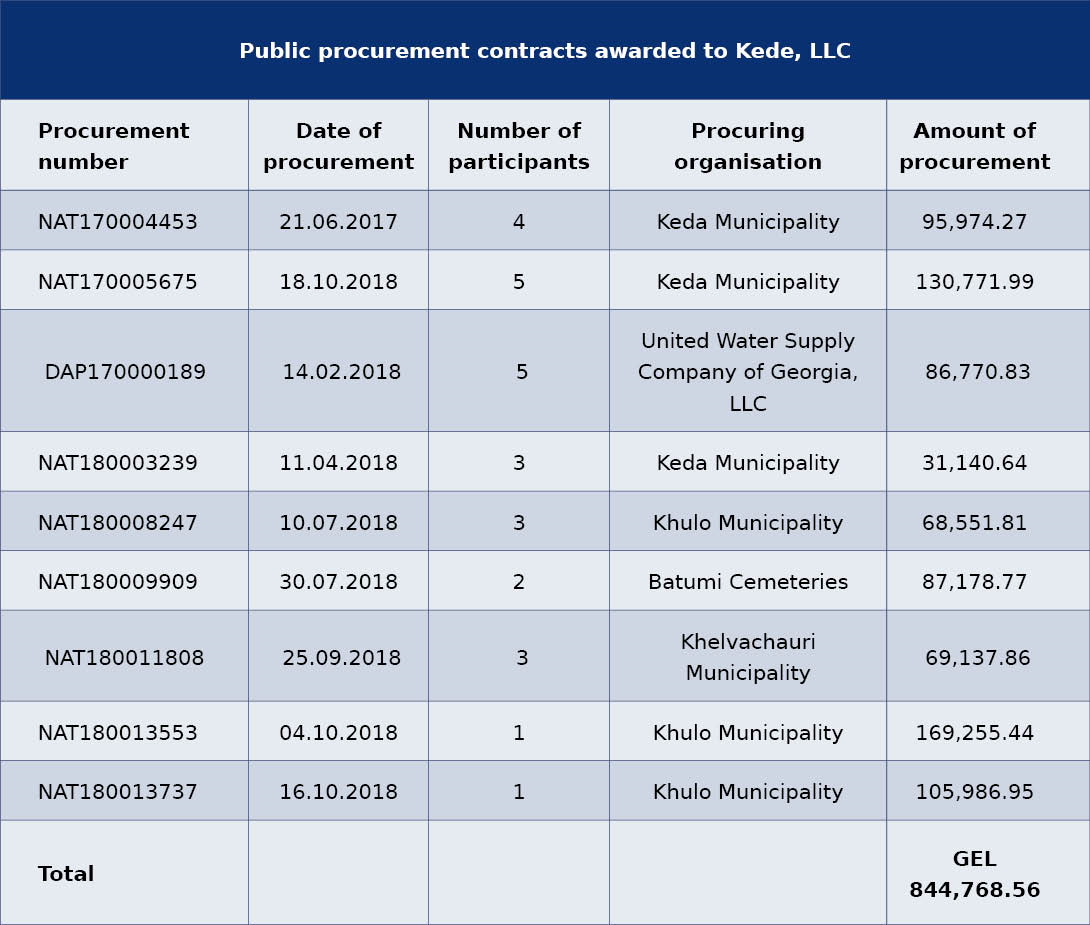 It is the opinion of Transparency International Georgia that the business activities of the single-seat district MP from Khulo, Shuakhevi and Keda, his family members and his inner circle raise many questions related to the risk of corruption, nepotism and the mandate of an MP. Economic activities of this MP are particularly conspicuous given that Anzor Bolkvadze is not particularly active in law-making (in 12 years as an MP, Bolkvadze presented a total of five initiatives to the Parliament for consideration. He was the author of an initiative in only two of these five cases – one of them he had prepared independently and another – together with other MPs. The remaining three documents that were presented had been prepared by the Government of Adjara, the Environment Protection Division of the Government of Adjara, and Batumi City Hall).

Economic activities and interests of Anzor Bolkvadze and people who are close to him clearly demonstrate the shortcomings of the mixed election system which is in place in the country. Various single-seat district MPs have been taking advantage of it for decades: they enjoy strong economic and political influence in their election districts and this often results in employing people close to them by the civil service, while companies linked to them have an advantage. As a result, the public is facing increased risks of corruption and a flawed public administration.

Based on the fact cited in this study, we call on:

-          The Anti-Corruption Agency of the State Security Service to immediately begin an investigation into the public tenders in which the companies Aisi, Kede and Giga 2015 were awarded contracts without any competition;

-          The Civil Service Bureau, given the facts that have been mentioned here, to especially check the information contained in MP Anzor Bolkvadze’s most recent asset declaration and, in the event of discovering that the declaration is incomplete, act in accordance with the provisions of the law.

Administrative Expenses of the Government of Adjara in 2018-2019