This report presents the analysis of pre-election advertising expenditures of political subjects carried out during[1] the last 10 elections and covers the period of 2008-2020[2]. 2012-2020 data is based on the cash expenditures[3] in declarations[4] submitted to the State Audit Office – the body responsible for monitoring political finances. However, the Central Election Commission (CEC) was responsible for monitoring political finances during the period of 2008-2011, thus this report includes[5] the declarations submitted to the CEC for this period of research. It is important to mention that before 2012 CEC was responsible solely on collecting the information and did not exercise an oversight function. There are a number of discrepancies in declarations fulfilled by electoral subjects, thus the transparency[6] is not sufficiently ensured. Since 2012, when this function was delegated to the State Audit Office, the system has been relatively improved, however, flaws[7] still exist. This circumstance complicates precise analysis of expenditures  carried out by the political subjects.

Speaking about the monitoring period, it has to be taken into account that the expenditure forms that are to be submitted by political subjects have been changed[8] several times during these years. The filled out and published forms of expenditures submitted  by majority of political subjects during 2012 parliamentary elections are partially or completely unreadable[9], while the State Audit Office no longer possesses the original versions as they were disposed[10] in accordance with law. However, we succeeded in obtaining majority[11] of the declarations. The aforementioned faults may bring insignificant errors forward, however, this does not affect general tendencies and findings.

Analysis of the political advertisement expenses

Transparency International Georgia studied the advertisement expenses spent by political subjects during the period of 2008-2020 and to what extent was the ruling party dominating in this direction. The domination problem of the ruling party is frequently discussed in assessments by local and international organizations[13].

During the last 10 elections conducted in  the period of 2008-2020 political subjects spent GEL 225 Million, out of which GEL 134 Million (59%) was political advertisement expenses. 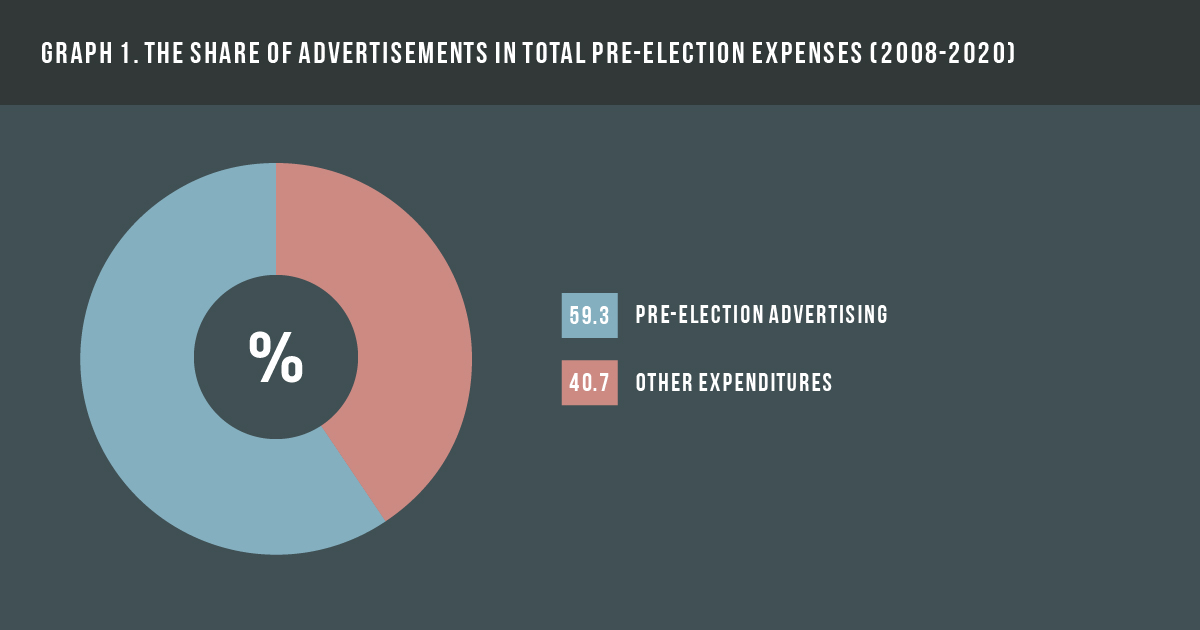 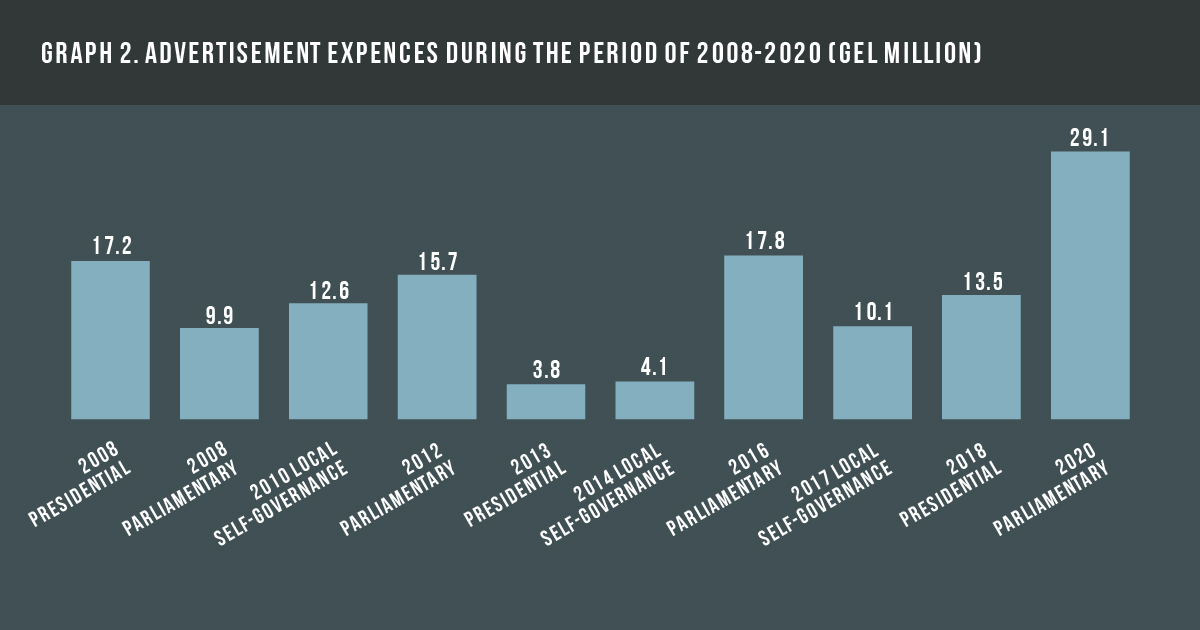 Internet advertising is one of the most stably growing pre-election advertising types. In 2012 expenses for the Internet advertisements amounted to GEL 50 Thousand, whereas in 2018 it summed up to GEL 800 Thousand[14] and by 2020 it exceeded GEL 3 Million. The least expense is related to branded accessories, which in 2012-2020 reached less than GEL 1 Million[15].

The research revealed a definite tendency that the subjects of the ruling party or candidates supported by them spend the highest expenses on advertisements that in 2008-2020 summed up to GEL 98 Million. This is 73% of the total amount spent on advertisements by political subjects. 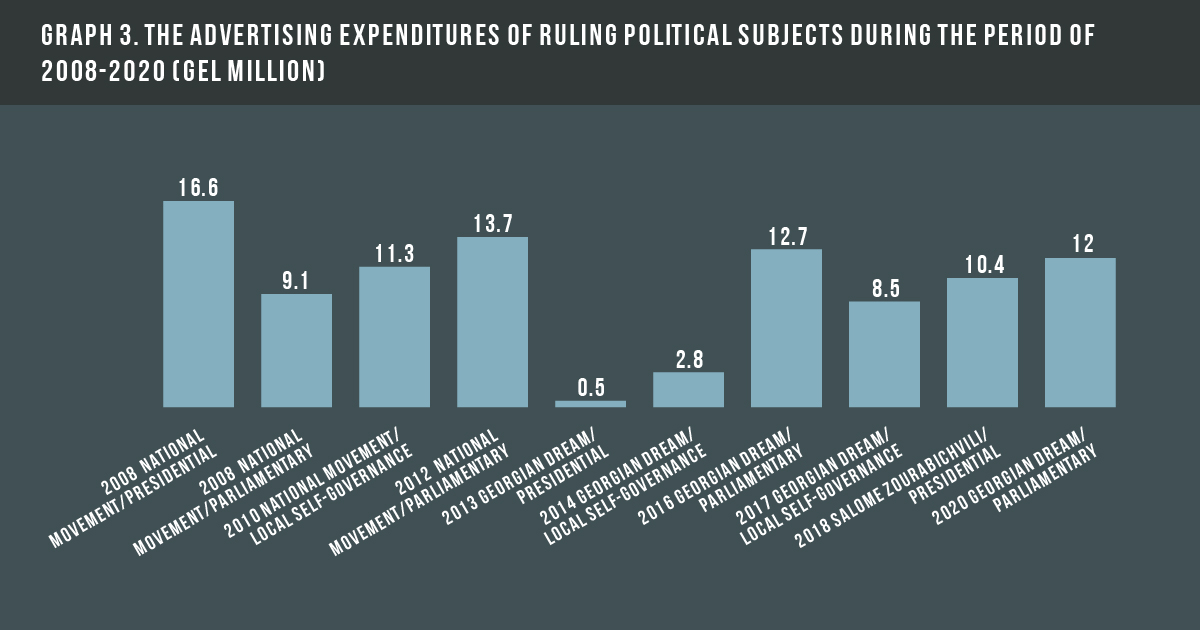 2013 Presidential Election is the sole exclusion from this context, when the ruling party spent only GEL 471 thousand on advertisements, whereas four times more, GEL 2.1 Million, was spent by Nino Burjanadze’s opposition party Democratic Movement – United Georgia and GEL 1.1 Million was spent by the former ruling party – United National Movement.

For more clarity, we should look at the allocation of political advertisement expenses among the political subjects during each election conducted in the period of 2008-2020. 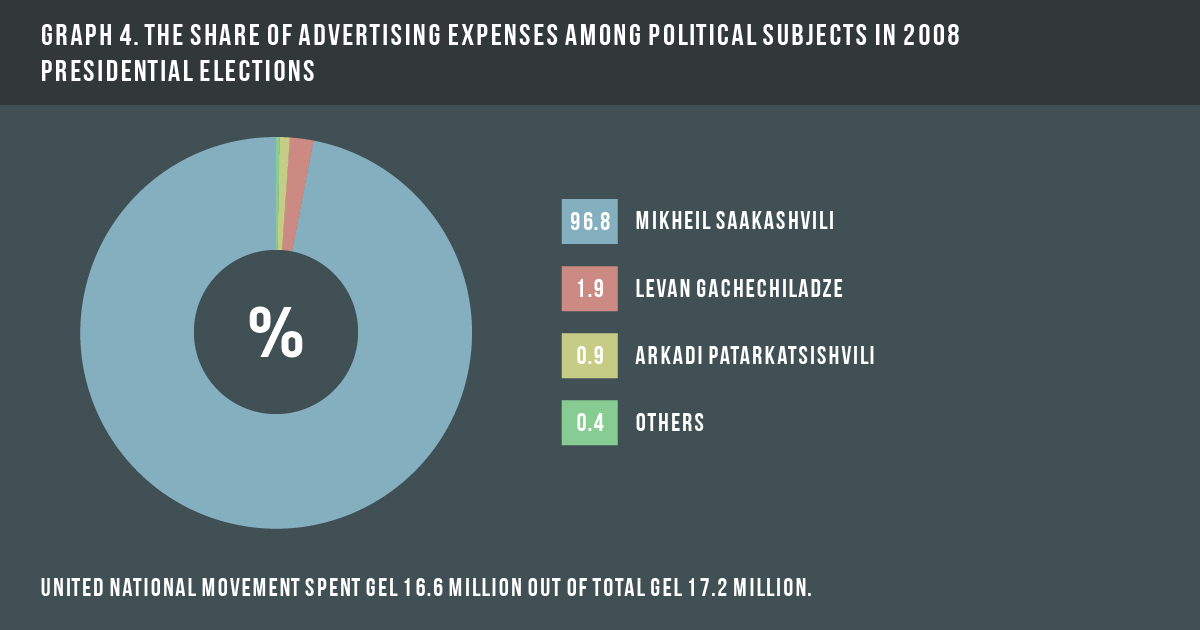 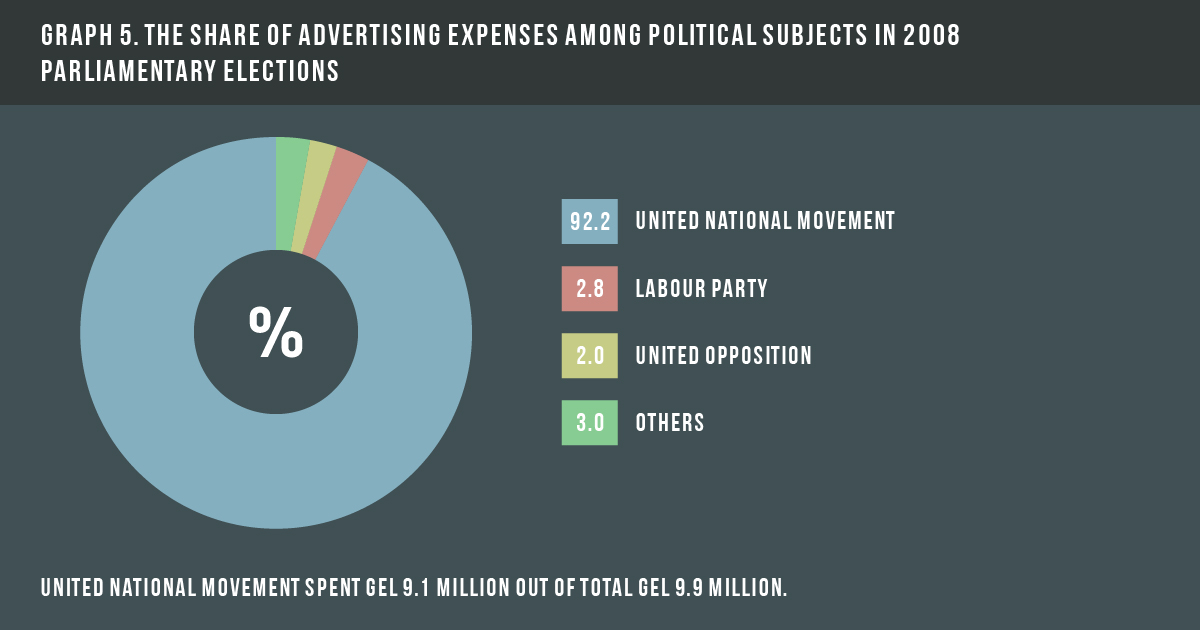 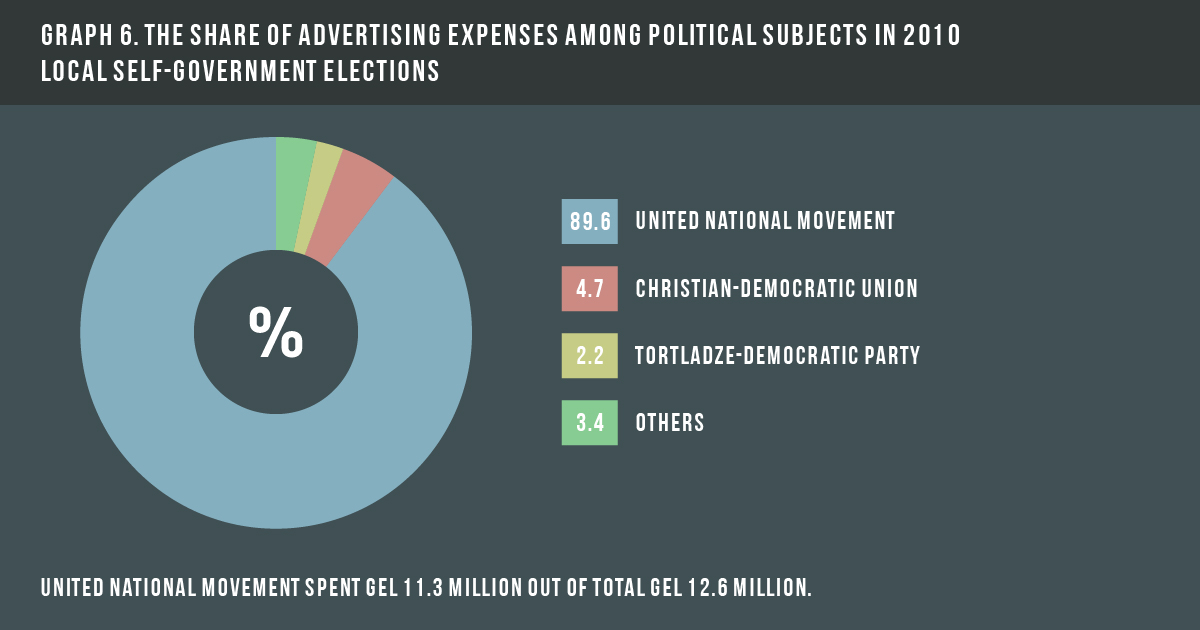 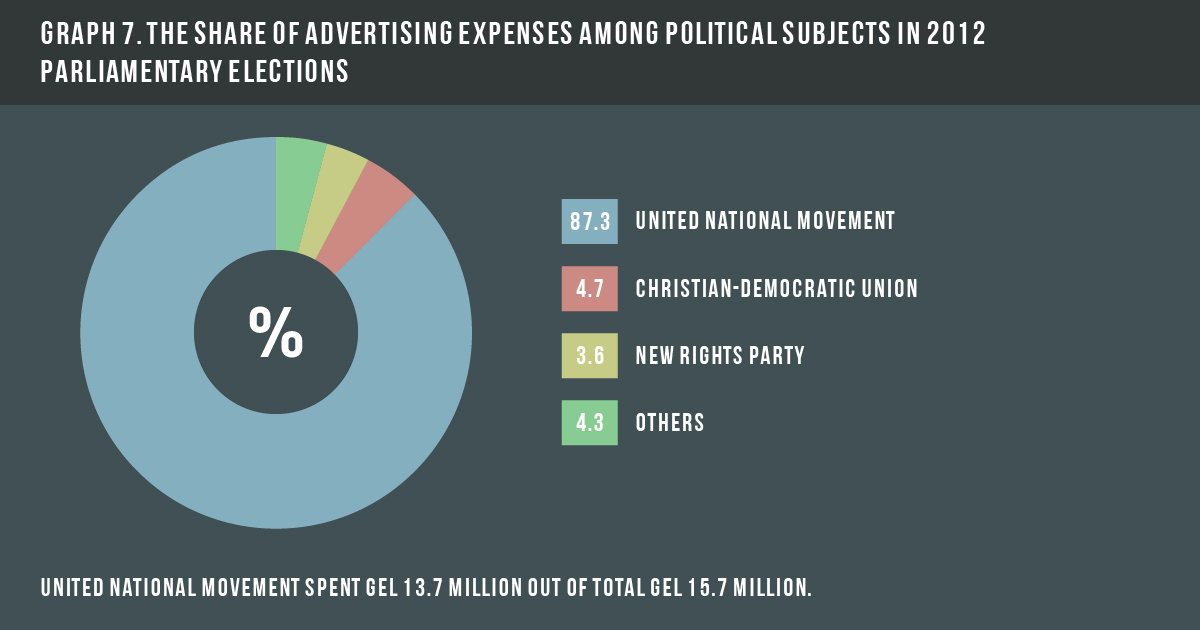 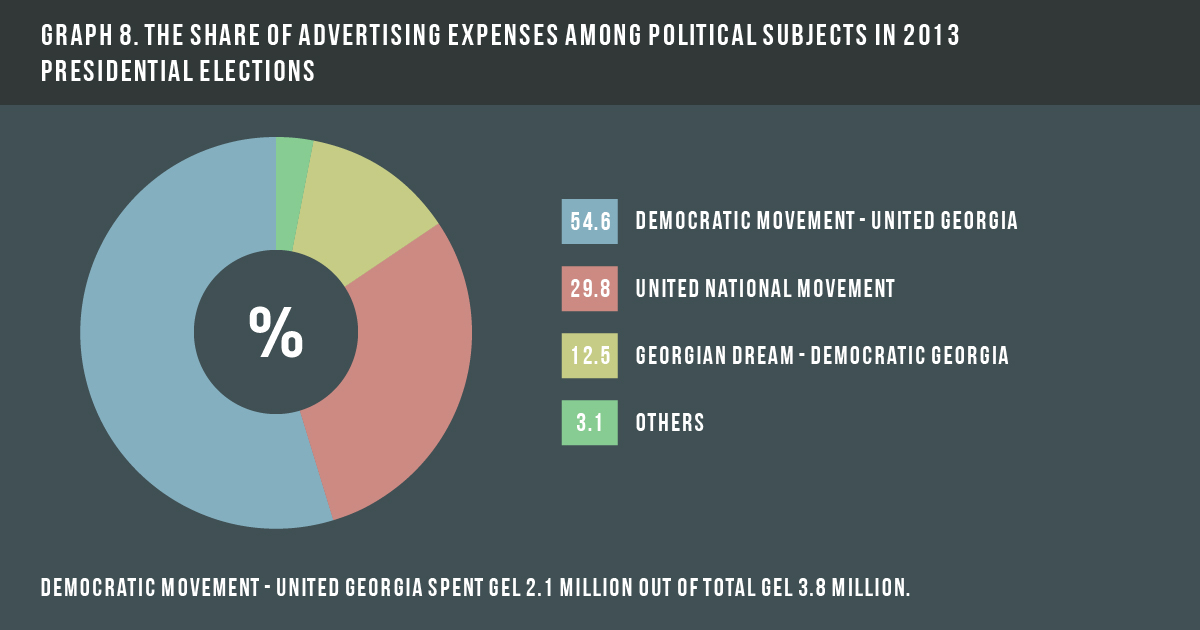 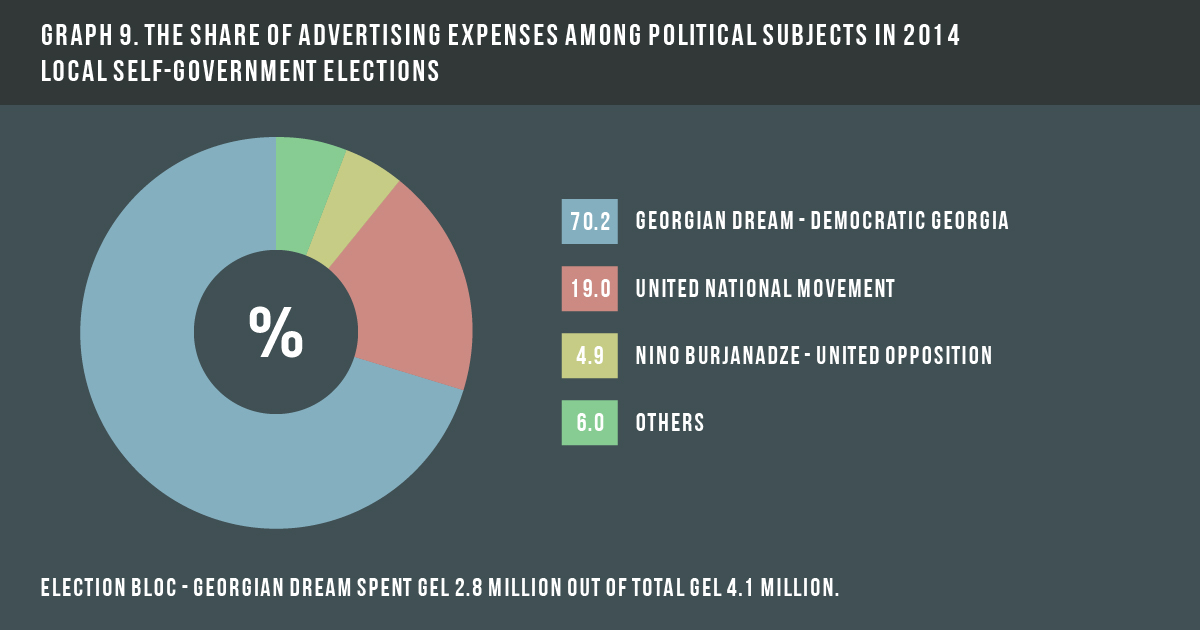 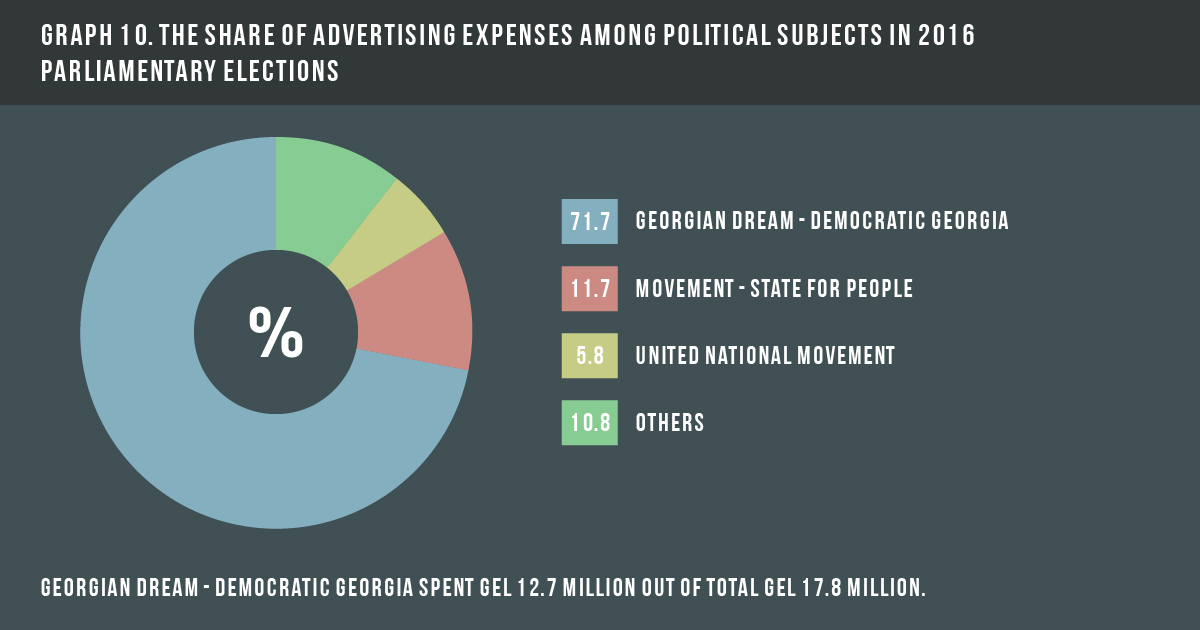 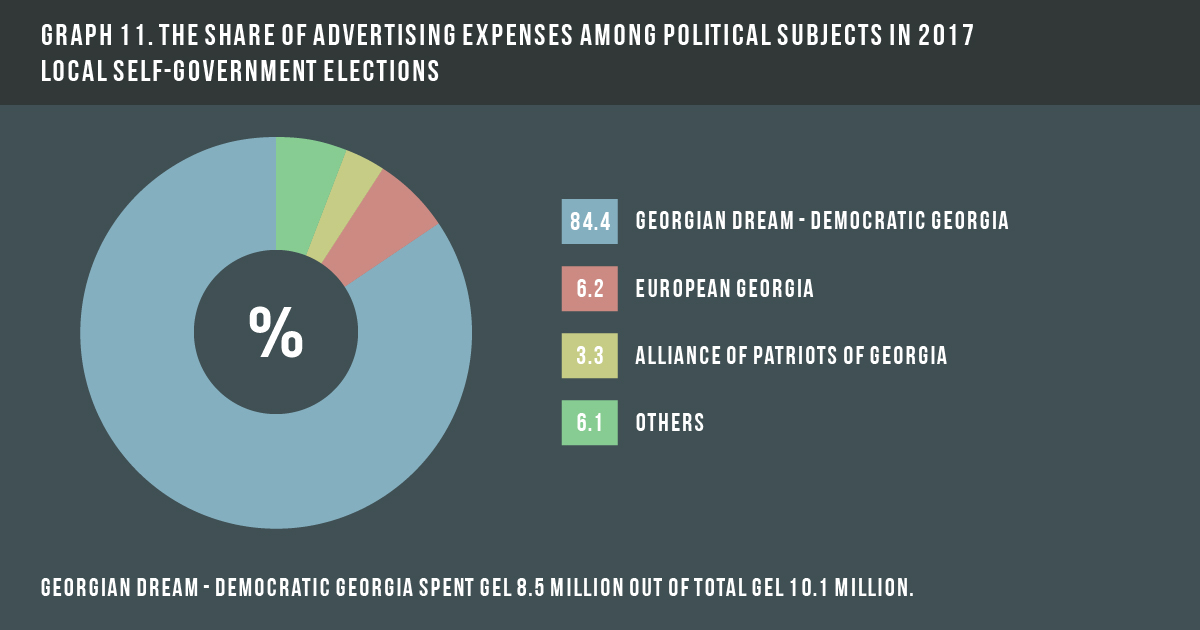 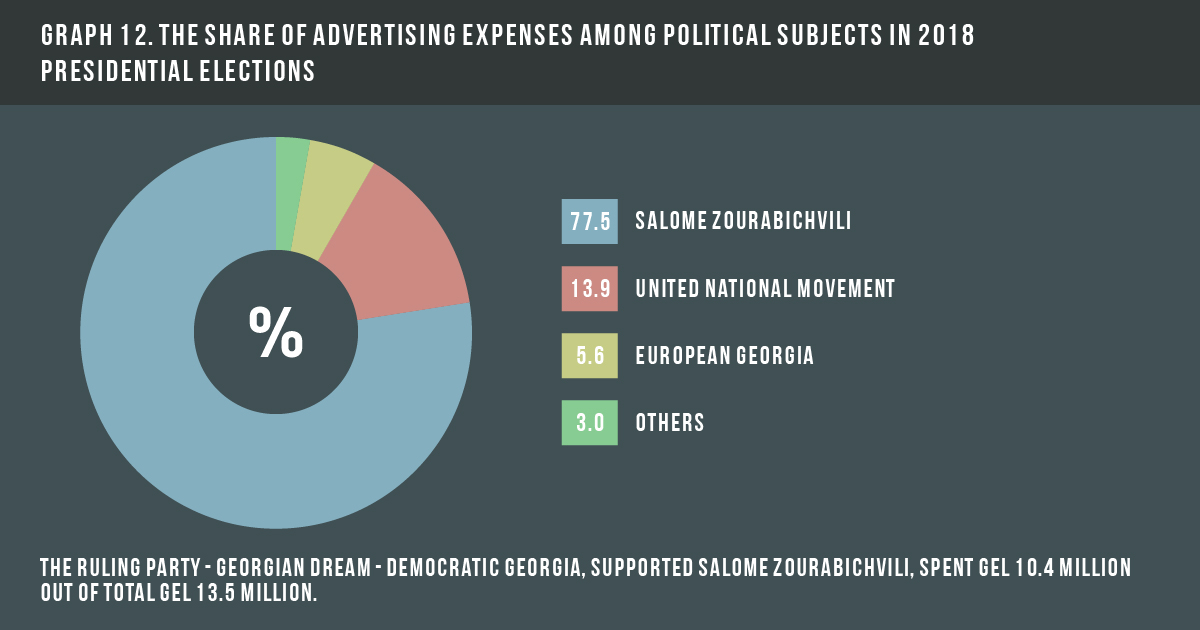 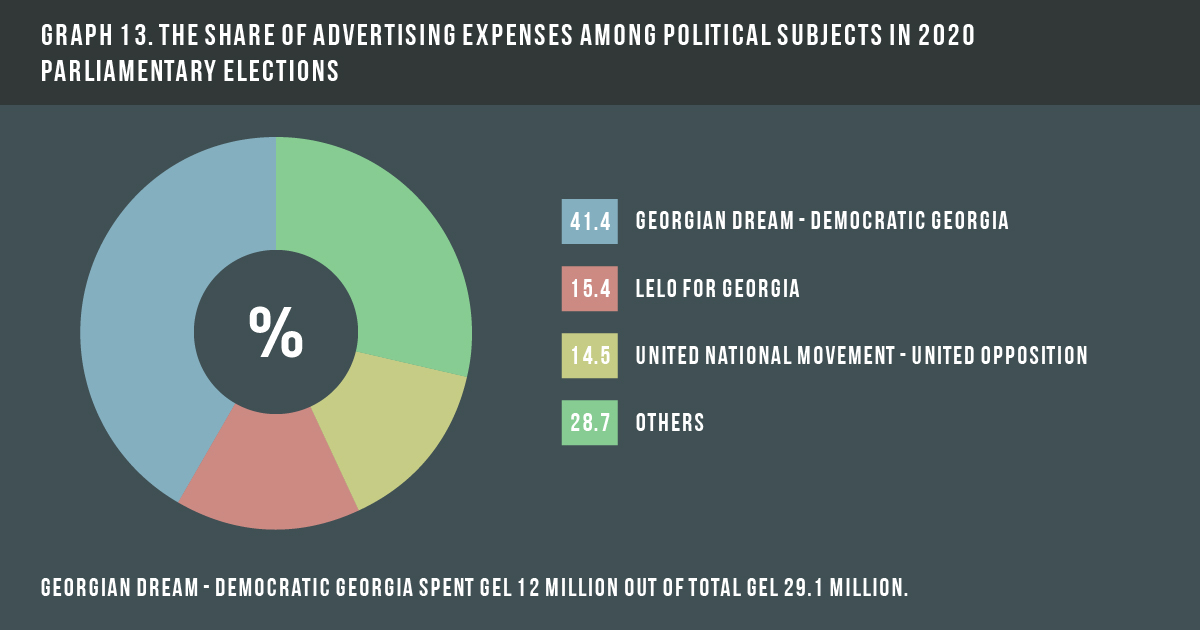 [14] “Internet Advertising Expenses” were not filled in separately before 2012.

[15] “Branded Accessorized Advertising Expenses” were not filled in separately before 2012.