Political parties spend a substantial amount of money on political TV advertising during pre-election periods, which is a significant part of broadcasters' revenues.[1] In the framework of the present study, we researched the data related to the placement of political TV advertisements by political entities in the pre-election period during the 4 general elections held in 2016-2020.[2] In particular, we analyzed the data[3] submitted by political entities to the State Audit Office and the Central Election Commission. The advertising placement practice of parties reflects the polarization characterizing the Georgian political and media space.

Among the elections held in 2016-2020, the largest amount of money was spent on political advertising during the 2020 parliamentary elections, which totaled GEL 14.5 million. As for the revenues received by TV channels, Mtavari Channel – a TV channel which is critical towards the government - leads the list with GEL 4.5 million. Imedi TV - a pro-government TV holding, is slightly behind Mtavari Channel.[4]

The 2020 data reflected the new reality we have in the media. In previous years, Imedi TV and Rustavi 2 were the largest earners in the advertising market. After the change of ownership of Rustavi 2, new broadcasters - Formula and Mtavari Channel - appeared in the market. The latter is in serious competition with other broadcasters and has established itself as one of the major players in the market.

In the 2020 parliamentary elections, along with the ruling Georgian Dream-Democratic Georgia party and the main opposition bloc – “United National Movement - United Opposition - Strength is in Unity”, other opposition parties such as Lelo for Georgia and Giorgi Vashadze – the Strategy Aghmashenebeli also actively placed political ads both in traditional and new media. 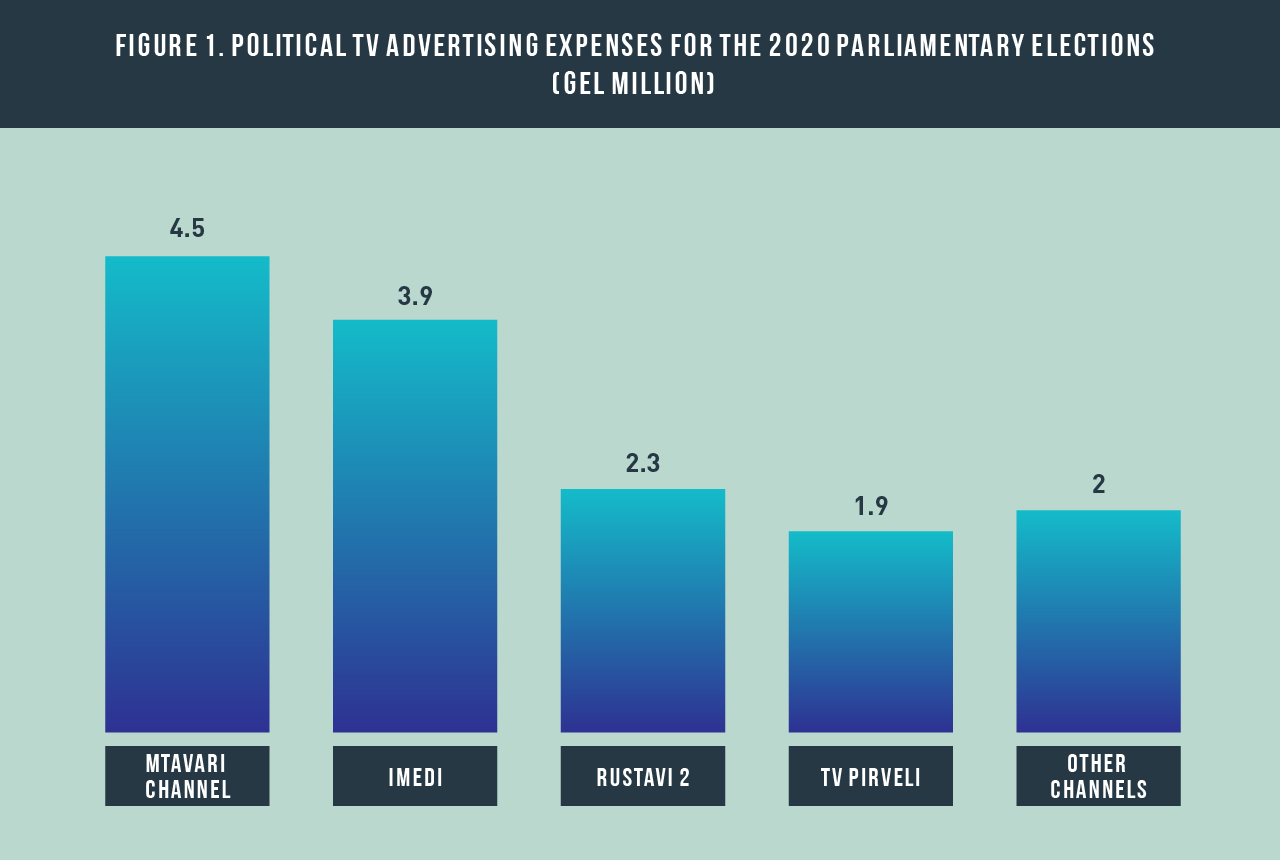 Georgian Dream is the only party that placed political advertisements with GEL 259 thousand on PosTV – another pro-government broadcaster.

TV Pirveli got the most political ads from a political party Lelo for Georgia. As for Rustavi 2, most of its political ads were placed by the Georgian Dream. 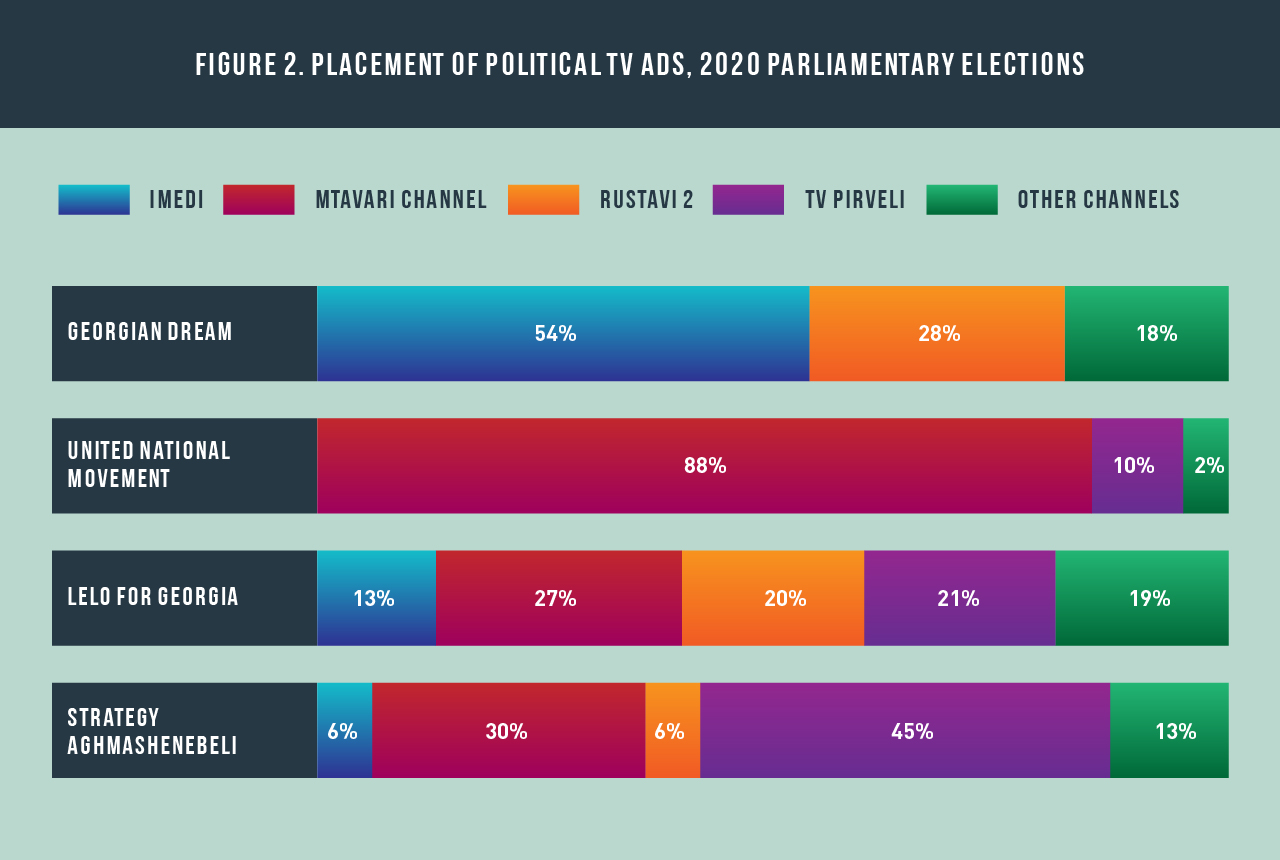 During the 2018 presidential election,[5] a total of up to GEL 8 million was spent on TV advertising. Salome Zurabishvili, a candidate supported by the Georgian Dream, spent the most - GEL 4.7 million. Her main rival from the United Opposition - "Strength is in Unity" - Grigol Vashadze spent GEL 1.7 million. The highest-valued political advertisements were placed on Rustavi 2, a pro-opposition TV channel at that time. Rustavi 2 was followed by Imedi and TV Pirveli. 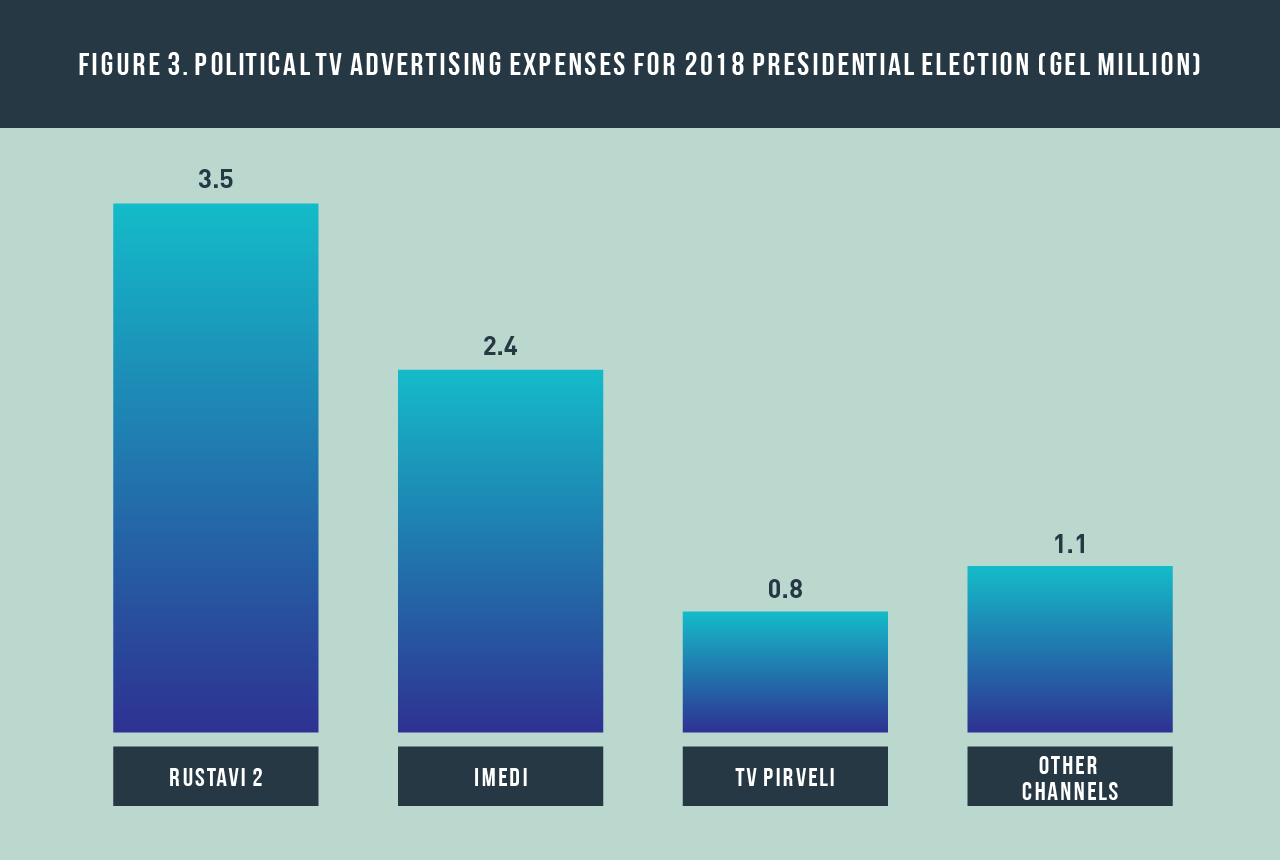 Salome Zurabishvili placed most of her ads on Imedi TV holding, and Grigol Vashadze - on Rustavi 2. Vashadze did not place any paid political advertisements on Imedi TV. In total, Rustavi 2 and Imedi received up to 76% of the total amount spent on TV advertising before the elections. 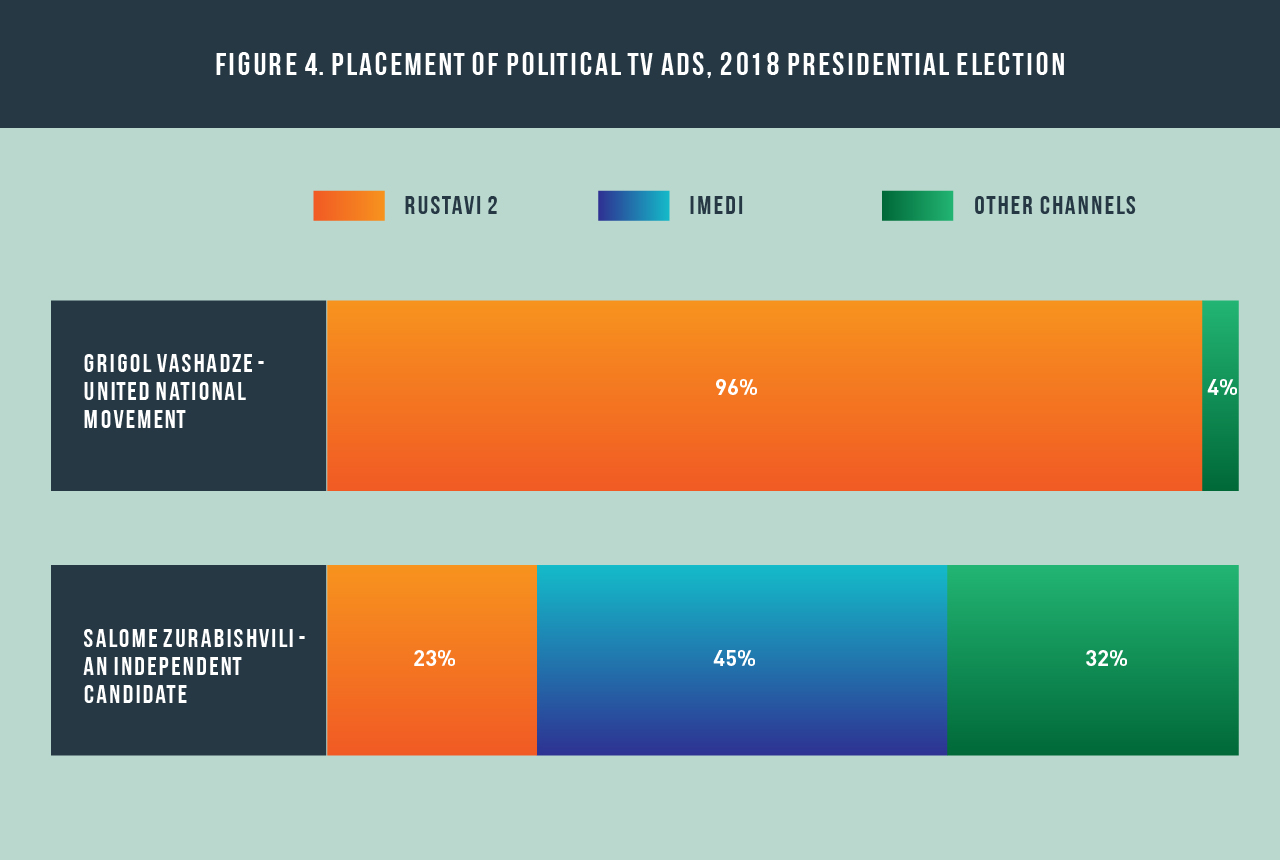 In the 2017 local self-government elections, political entities spent up to GEL 6 million for political TV advertising, from which Imedi Holding received the most income. The United National Movement did not place any political advertisements on Imedi TV. In this case, too, most of the money (74%) spent by political entities on pre-election advertising was redistributed between two market-leading TV companies. 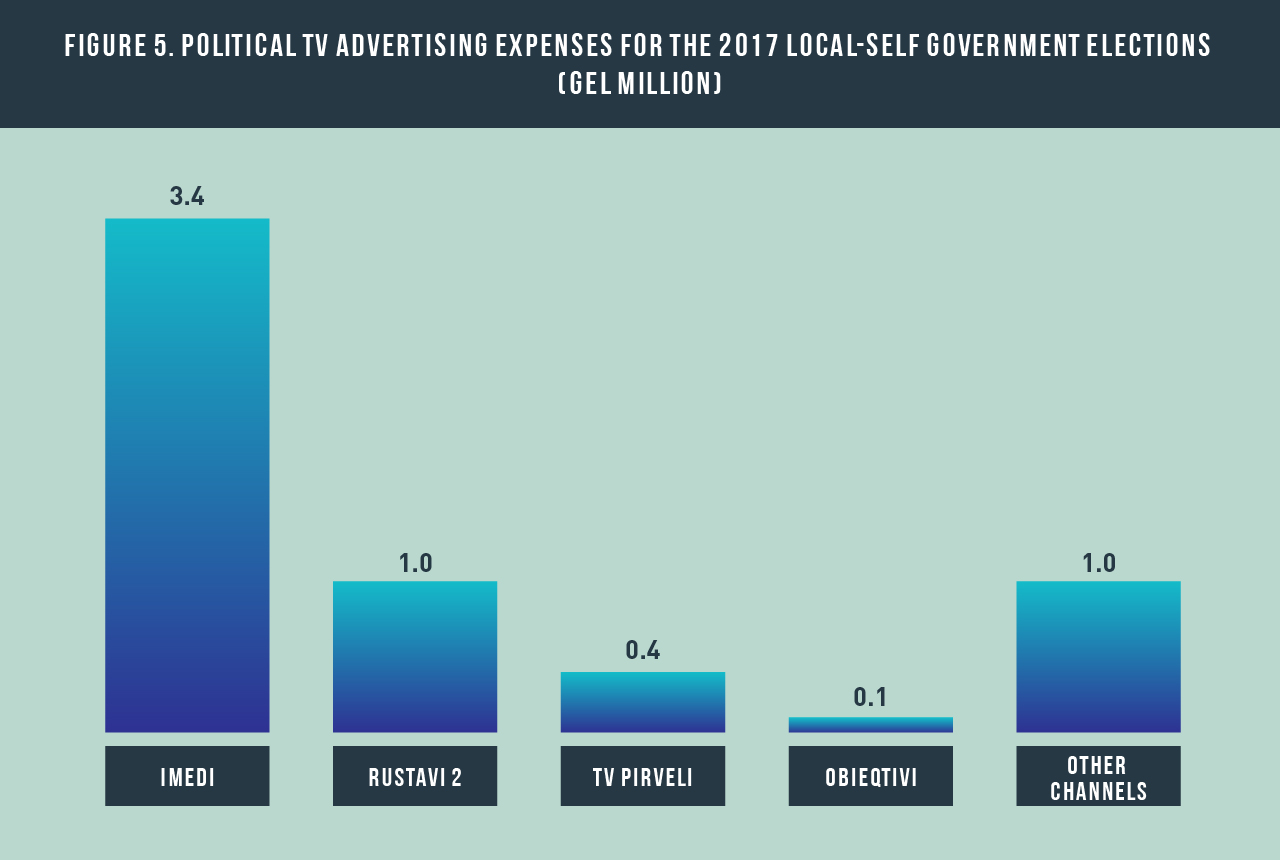 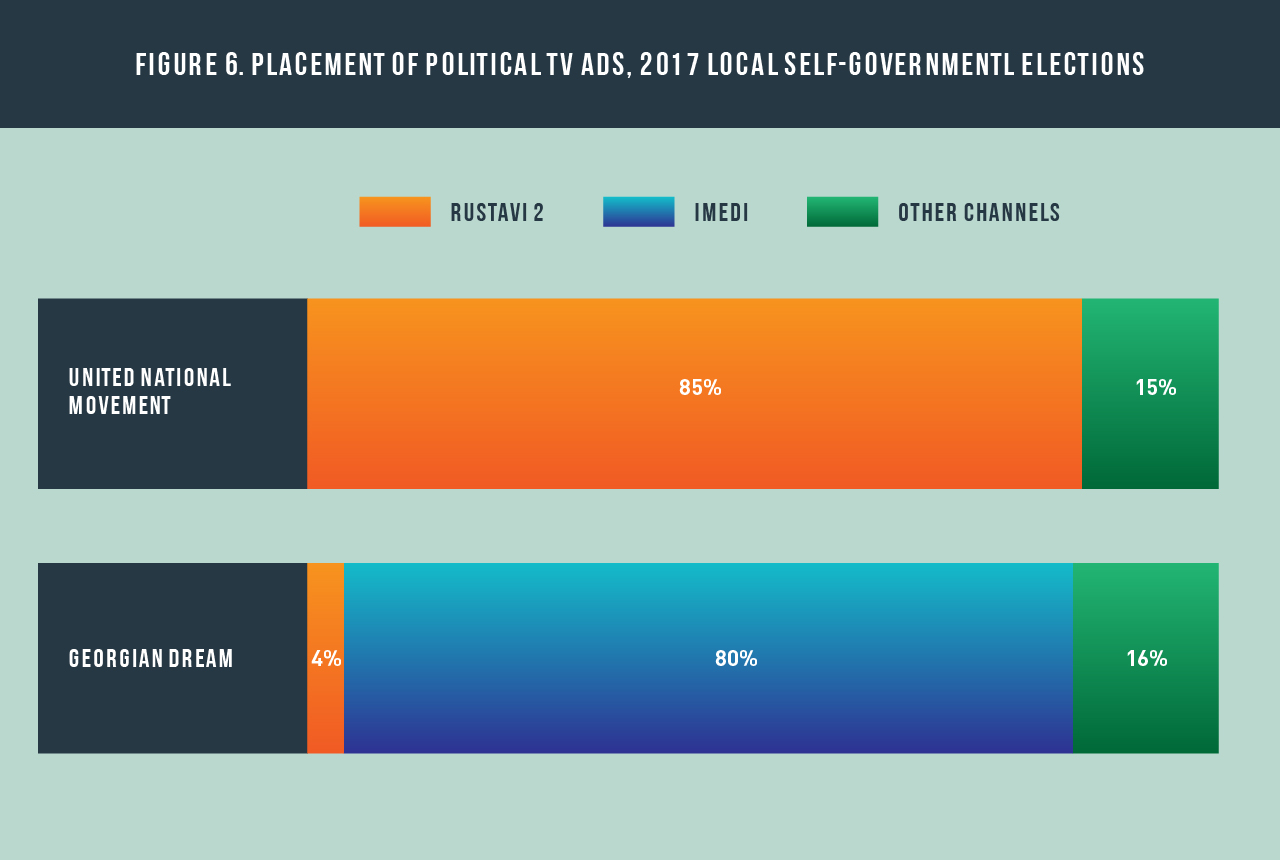 In 2016, the expenses on political TV advertising amounted to more than GEL 9 million. The most – GEL 3.6 million worth of advertising was placed on Imedi TV. 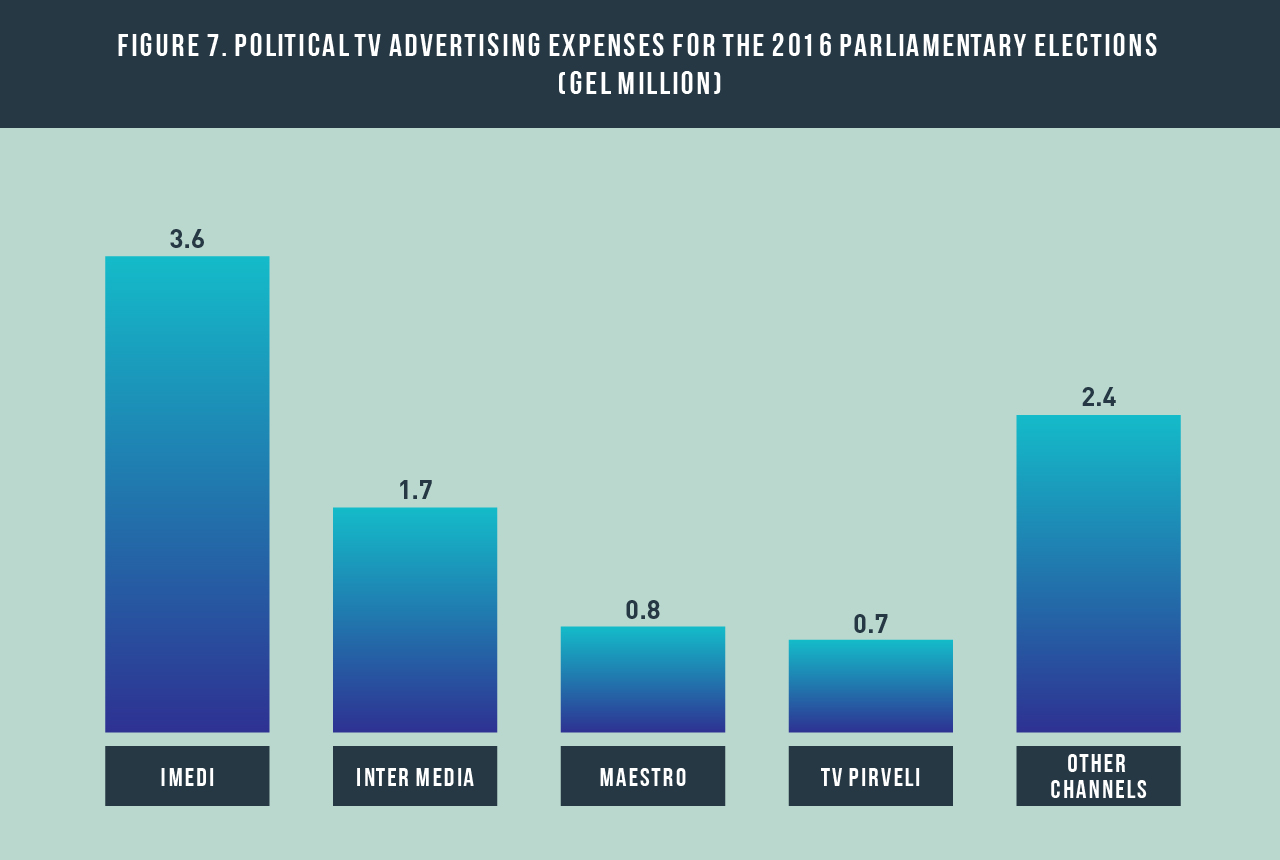 Based on the documents submitted by political entities to the State Audit Office, it is not possible to identify exactly on which channel some parties placed their political advertisements. However, according to the available data, during the 2016 parliamentary elections, the Alliance of Patriots of Georgia ordered an advertisement worth GEL 32 thousand to the advertising sales house Inter Media. Paata Burchuladze's movement – the State for the People[6] also ordered political ads of GEL 1.6 million to the same organization. At that time, Inter Media was selling all TV commercials of Rustavi 2 Holding[7] and part of ads of TV Pirveli and Kavkasia TV.[8] 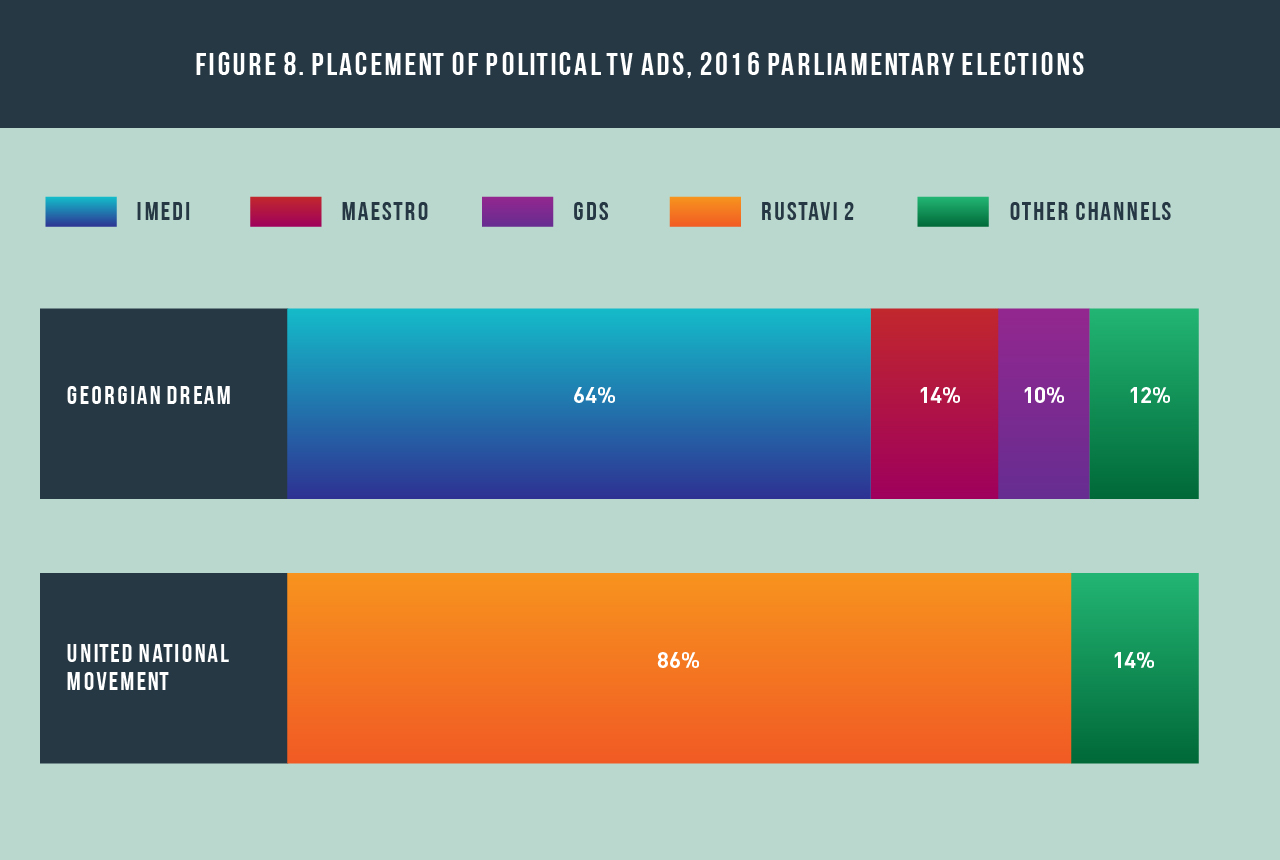 [3] In 2016, election subjects were required to submit to the State Audit Office the information specifically where the money allocated for TV advertising was spent and on which television station the advertisement was placed. The data provided in the study are based on the information submitted by political entities to the State Audit Office, which we filled in with the data of the Central Election Commission (CEC). According to the law, the CEC reimburses part of the costs of placing TV commercials for qualified election subjects. The data of the CEC and the State Audit Office sometimes do not match, thus the data may contain a small error. However, it will not affect the overall picture. The data of the 2020 parliamentary elections are provided by the CEC as of 28.01.2021.

[4] Maestro and GDS have been merged into Imedi Holding since 2017, so the data of all three TV stations in 2017-2020 were counted together.

[5] Two rounds were held in the 2018 presidential election, therefore, the amount paid for advertising is calculated according to both rounds.