Transparency International Georgia, based on open data and public information, has collected large infrastructure projects to be implemented in Kutaisi as promised by politicians. These projects had been announced for years and public presentations have been held, however, the majority of them have not even been launched yet. 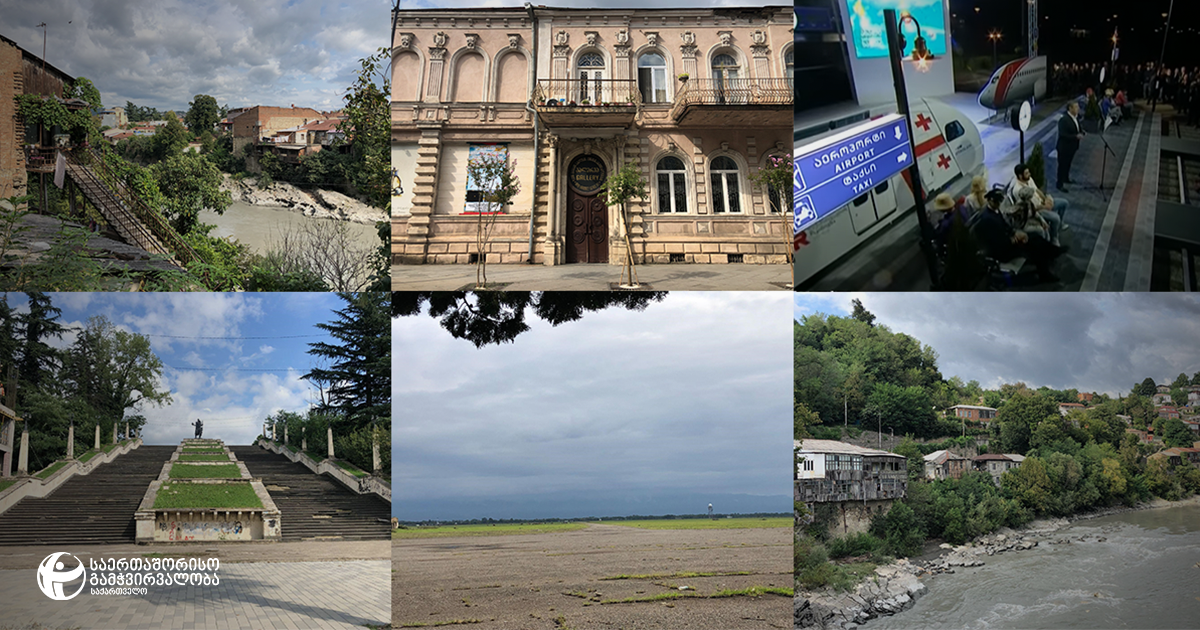 The rehabilitation of the Rioni riverside houses in Kutaisi was announced by the Mayor of Kutaisi by that time, Giorgi Chigvaria, in April 2018. According to him, the project envisaged the reconstruction of almost 70 houses on the both sides of Rioni river, located near Jachvi, Rustaveli and Red bridges. The project had to be completed in 2-3 years and GEL 6 million was allocated for this purpose.

Kutaisi City Hall named this project as the largest and the highest priority project of 2018. The same year, the City Hall negotiated with the Cultural Heritage Agency, the Ministries of Infrastructure and Economy and presented the project to the Municipal Development Fund.

On November 22, 2018, during inspection of the houses, the Director of Municipal Development Fund, Giorgi Shengelia, announced that the fund would work on designing the project in 2019, start the process of rehabilitation in 2020 and complete the works in the following two years.

During the business exhibition that was held in Kutaisi In May 2019, Giorgi Shengelia confirmed again that the project would be launched during the first quarter of 2020, however, this time, the estimated cost of the project was GEL 25 million, according to him.

Reconstruction - Rehabilitation of the Davit Kakabadze Gallery of Fine Arts

In 2018, in addition to the Rioni riverside houses, the Municipal Development Fund announced the start of the rehabilitation of the Davit Kakabadze Gallery of Fine Arts in Kutaisi.

The implementation of the project has not started so far.

Rehabilitation of the 100-Steps Stairs

The City Hall made the sketch of the project publicly available and stated that it would spend GEL 500,000 for the works. Later, during the process of planning the 2020 budget, GEL 1,000,000 was allocated for it. The City Hall assumed the rehabilitation project would be complete 1,5 year after the announcement of a tender, however, nothing has been done so far.

The tender on reconstruction of the Hundred-Step Stairs in Kutaisi was announced on April 3 of the same year. Estimated cost of the purchase was GEL 736,306. There were two competitors in the electronic tender - an individual entrepreneur Besik Ivanishvili and Lamoderna LTD. Besik Ivanishvili is an entrepreneur residing in Sachkhere and he made a bid lower than that of the Lamoderna LTD, therefore, he was a real contender for winning the tender, however, following the spread of information on his alleged connections with Georgian Dream by the media outlets, the City Hall declared Lamoderna LTD as a winner, despite the fact that it had the higher bid. Later, the tender was cancelled by the City Hall and it stated that the project had to be discussed publicly.

No public discussions have been held since then and the construction works have not been launched either. The 2021 budget does not envisage implementation of this project[1].

The construction of a factory of electric vehicles was announced in April 2019 by Prime Minister of Georgia by that time, Mamuka Bakhtadze. A spectacular presentation was held in Kuraisi in June, 2019. During the presentation, it was stated that the factory would supply electric vehicles to the market from 2020.

In 2019, the state transferred a 100 hectares land plot along with the buildings on it to the Big Service’s (the company) account for GEL 99,000. According to the privatization terms, the owner had to build a factory within two years, which would produce at least 5000 electric cars and employ 300 people.

The company actually started small-scale construction works on the territory intended for the factory, however, the factory has not been completed yet. The construction process was postponed until 2022 by mutual agreement with the Ministry of Economy. According to the company’s representative, the project was postponed because of the Covid-19 pandemic.

In March 2016, construction of a multi-functional center next to the former building of the Parliament of Georgia was announced in Kutaisi. The project envisaged construction of hotels, aqua park, casino, cinema, entertainment facilities and other related objects. According to the information, the project was planned by AIA Entertainment LTD with a total investment of EUR 273 million.

In February 2016, the representatives of the company addressed the Ministry of Economy and Sustainable Development with the construction proposal of Kutaisi Resorts investment project and asked for privatization of 70 hectares of land using the direct procurement. A part of this land plot - 204,606 sq/m was on the account of Kutaisi municipality. This territory was transferred to the state by the Decree N244 of March 21, 2016 of the City Council of Kutaisi based on the application of the National Agency of Property Management and the State Representative. However, the construction of a multi-functional center was not launched in Kutaisi and the land plot was returned to the account of the self-government by the National Agency of Property Management in 2020, meaning that the project will not be implemented.

In 2016, the Then-Prime Minister, Giorgi Kvirikashvili, announced the construction of a railway connecting Tbilisi to the Kutaisi Airport. The presentation of the project was held on April 3, 2017, according to which, a new railway station was planned to be built next to the Kutaisi Airport. According to the presentation, the project would be completed in 364 days, however, it was not even launched.

This decision was revised later. In 2019, the representatives of the government decided to rehabilitate the existing old station instead of building a new one. The old station is located far from the Airport.

The rehabilitation plan of Kopitnari Station of the Georgian Railways was finally concluded in 2020 and the tender was announced by the end of that year. Inzhmsheni 96 LTD won the tender and the contract was signed in March 2021. The cost of the contract amounts to GEL 1,247,736 and the construction has to be completed by December 30, 2021.

[1] According to the latest information, the financing of the project is planned within the EU and state integrated program. Bids accepted from September 26, 2021.