Transparency International Georgia presents information about remuneration, bonuses and salary supplements paid by the administrations of nine State Representatives – Governors of Georgia in 2017, as well as these administrations' expenses in telephone communications, business trips, fuel and food and restaurant services.

Our organization published an analytical study last year as well. Even though, compared to last year, there is a trend of decrease in expenses, this trend does not affect salaries and fuel expenses. Similar to last year, the Administration of Samegrelo-Zemo Svaneti remains at the top of the list in terms of the amount of salary supplements as well as fuel expenses; Kakheti Administration paid out the highest amount in bonuses; Imereti Administration spent the highest amount on food and restaurant services. 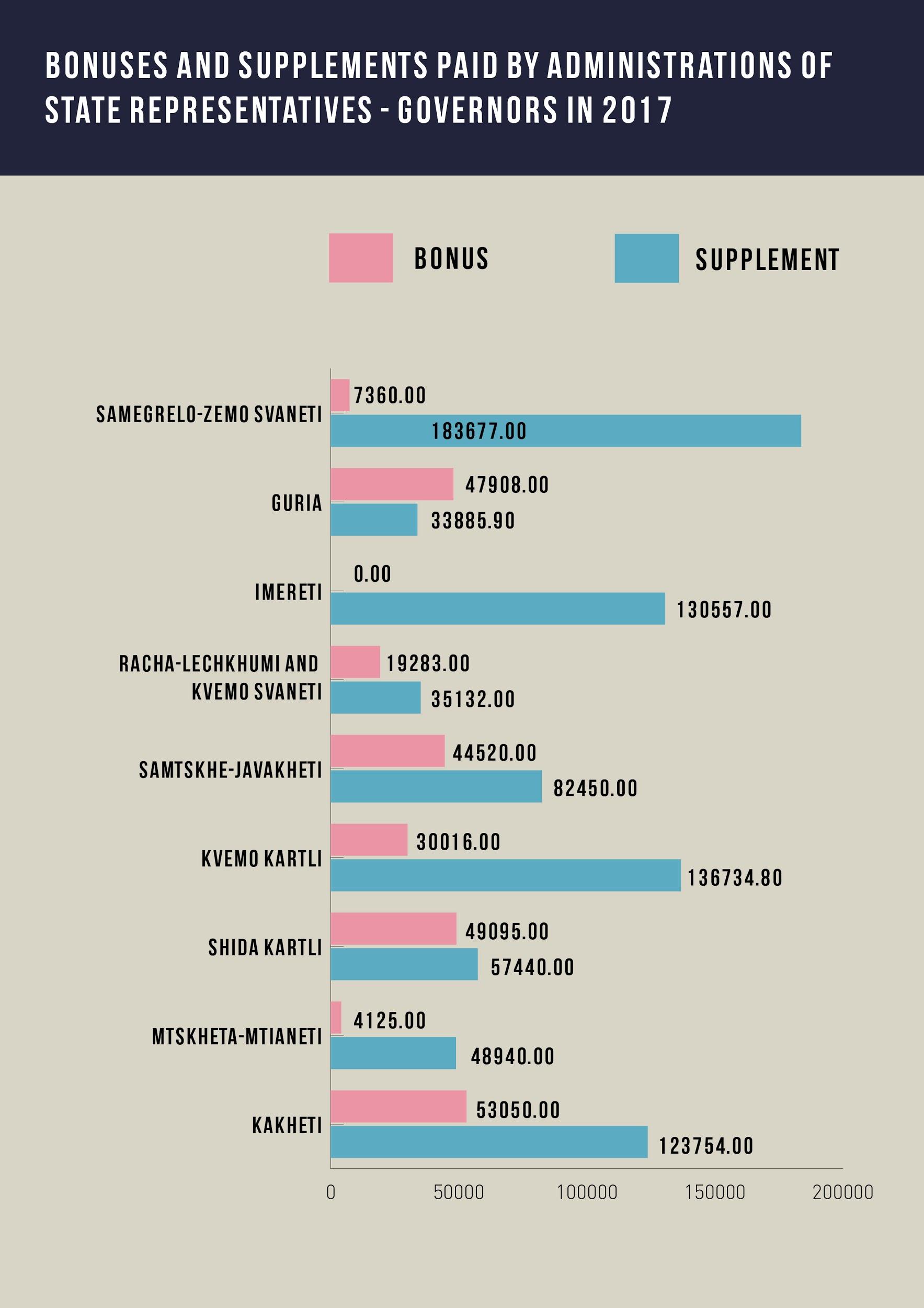 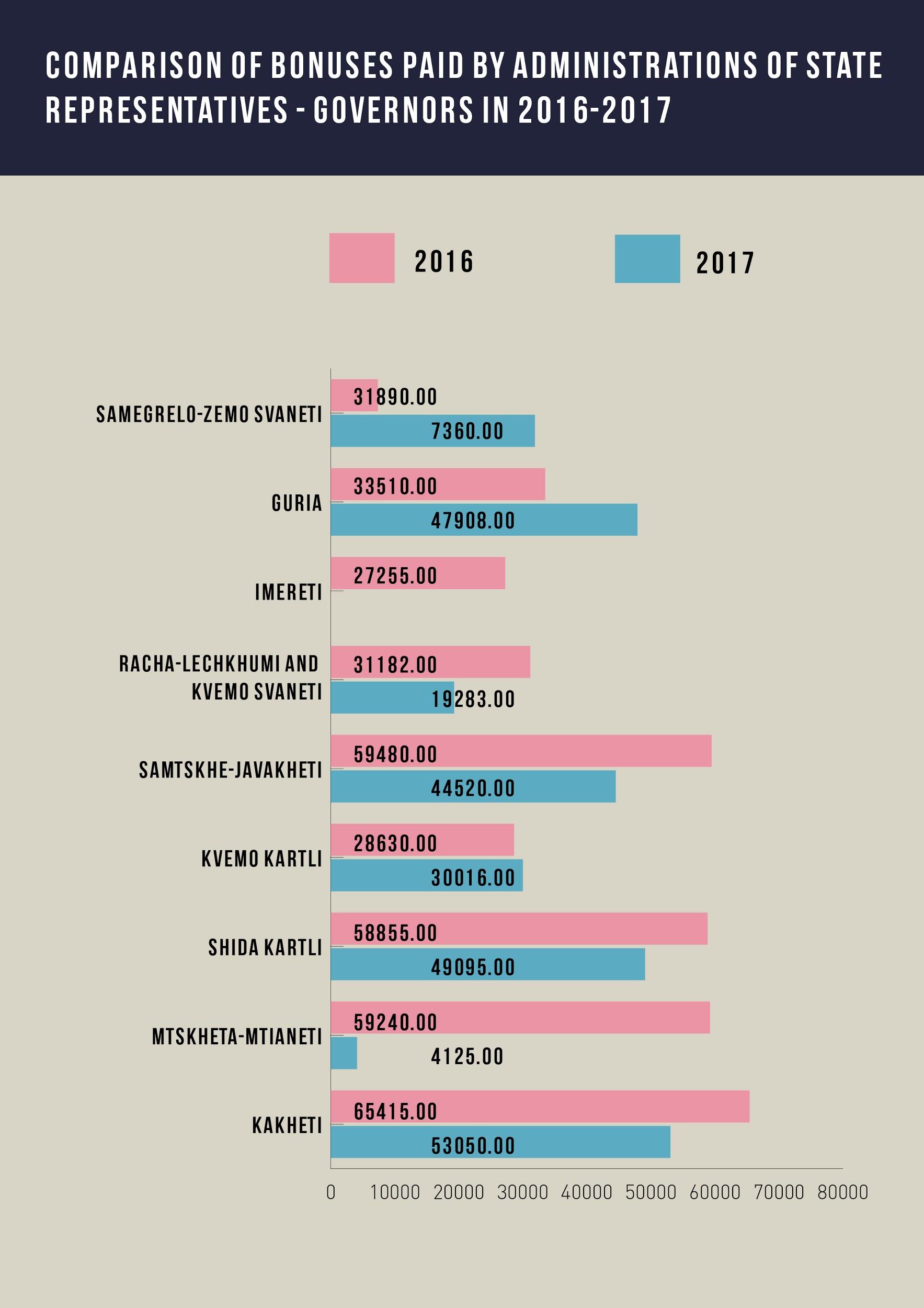 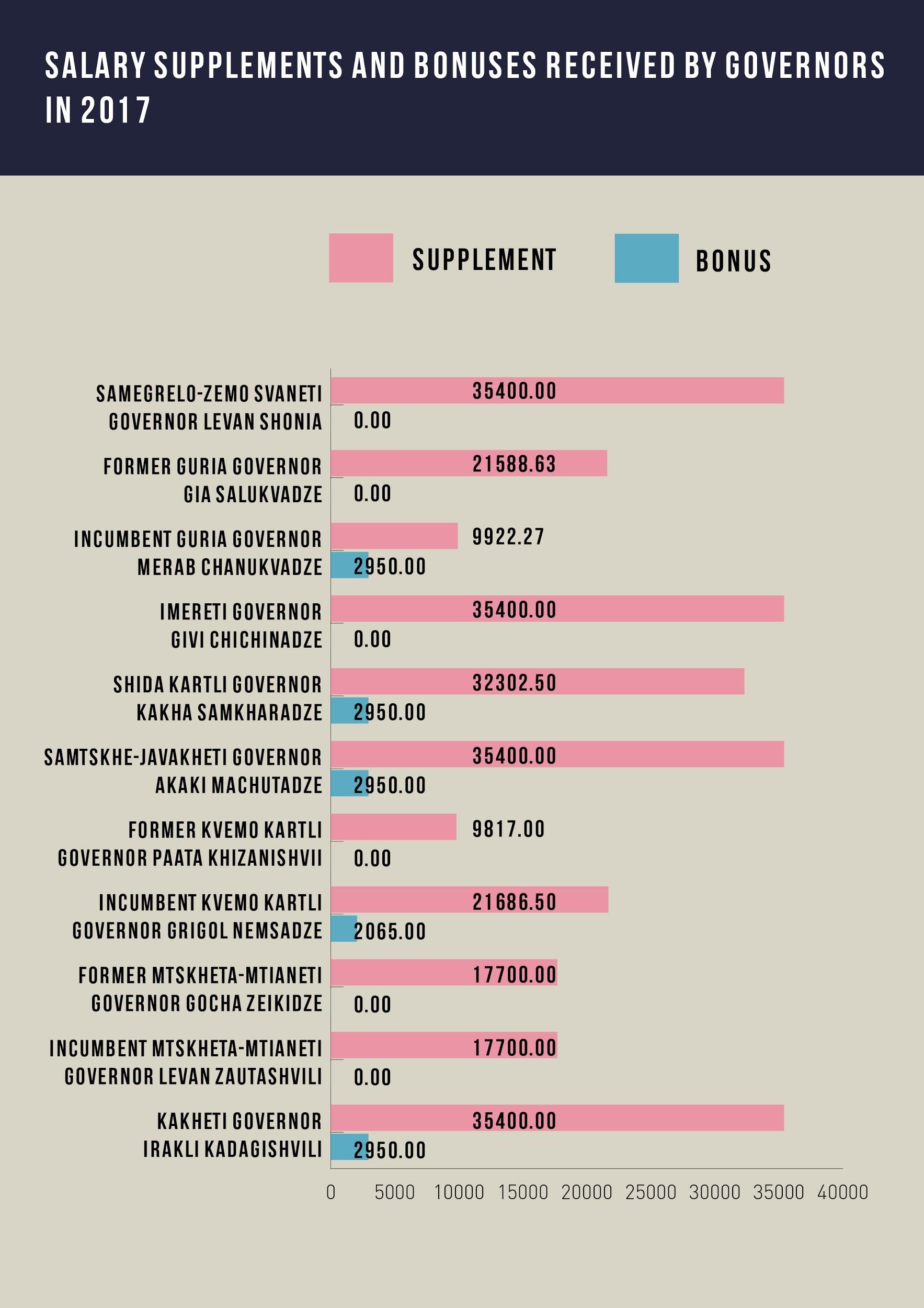 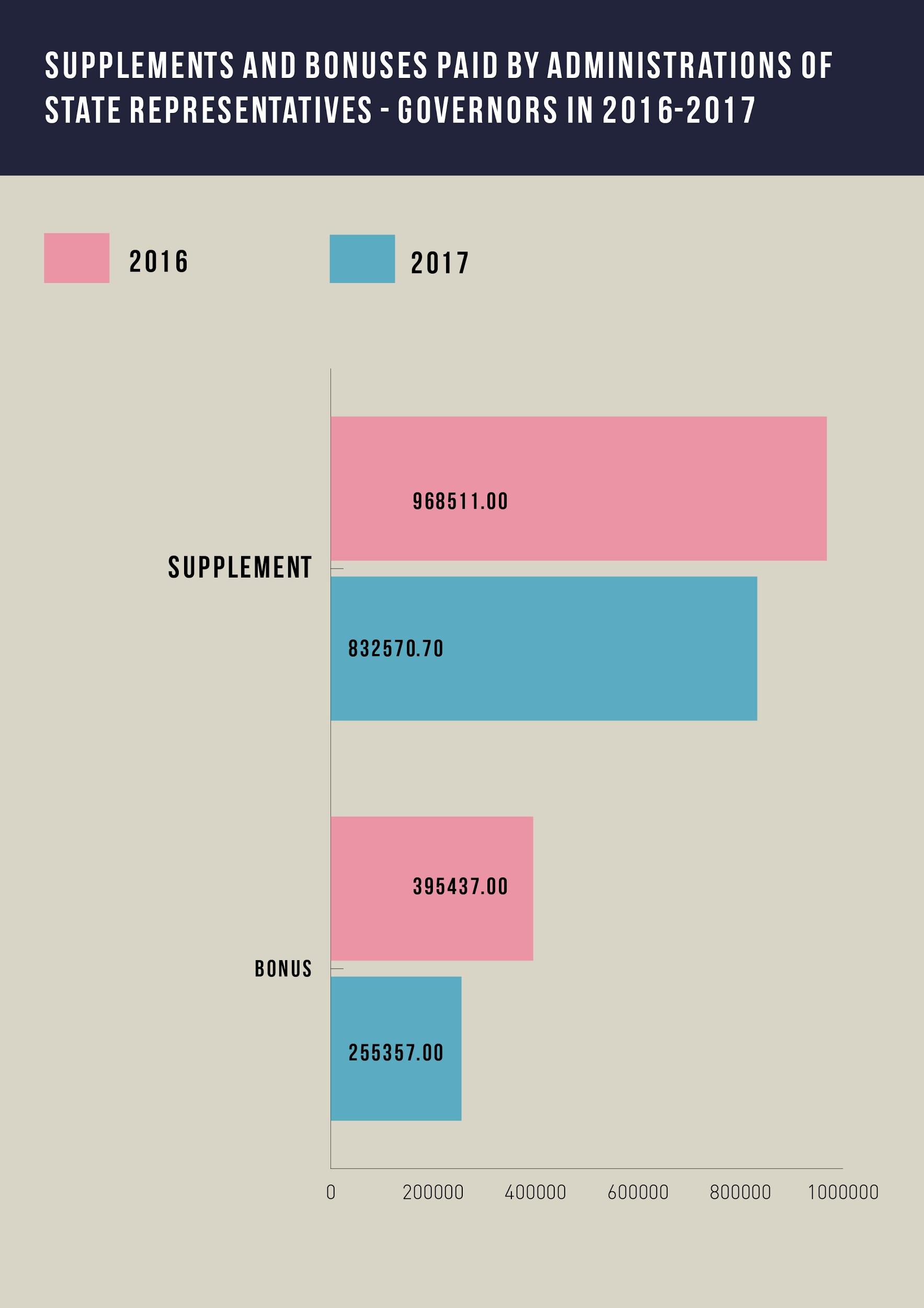 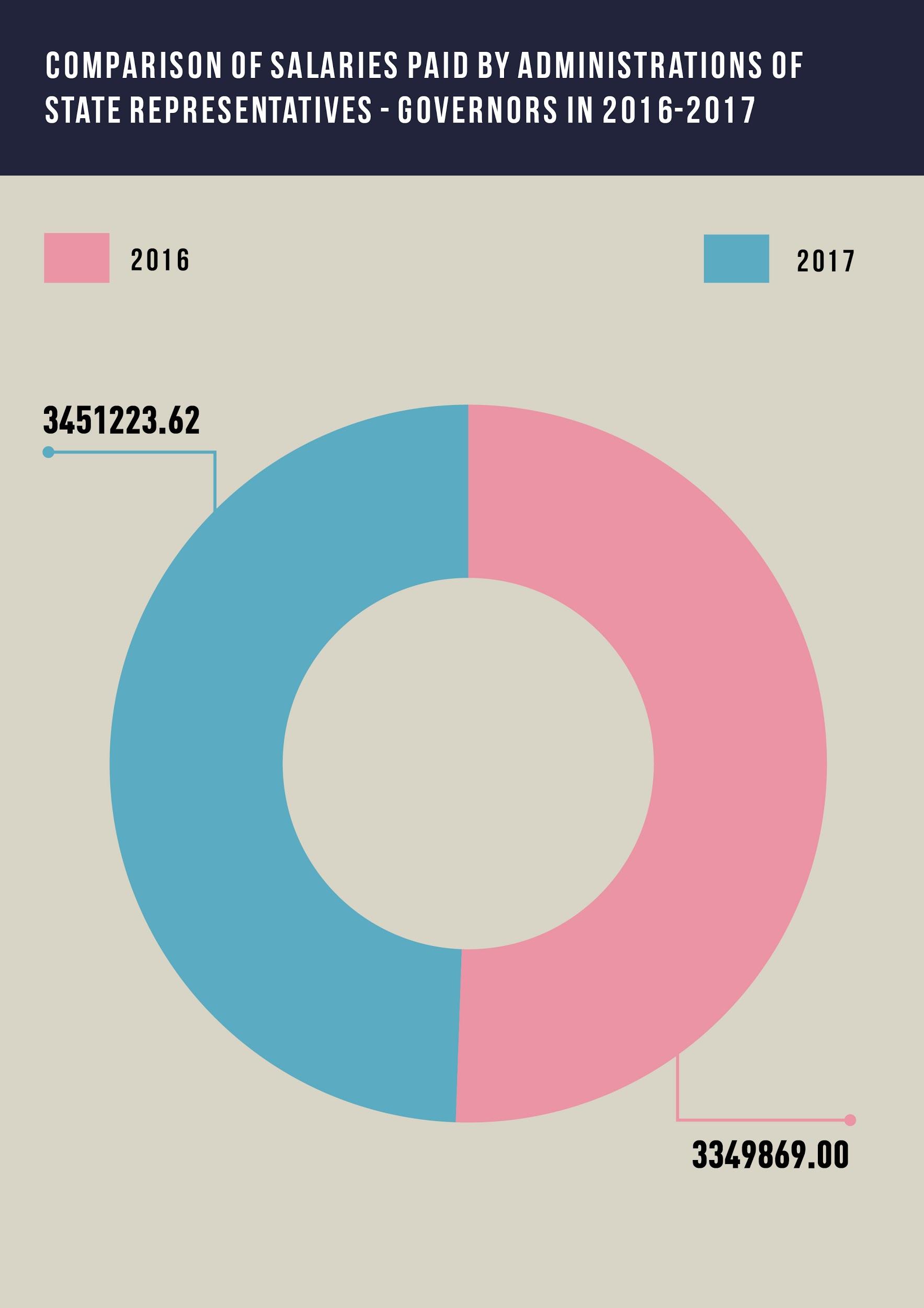 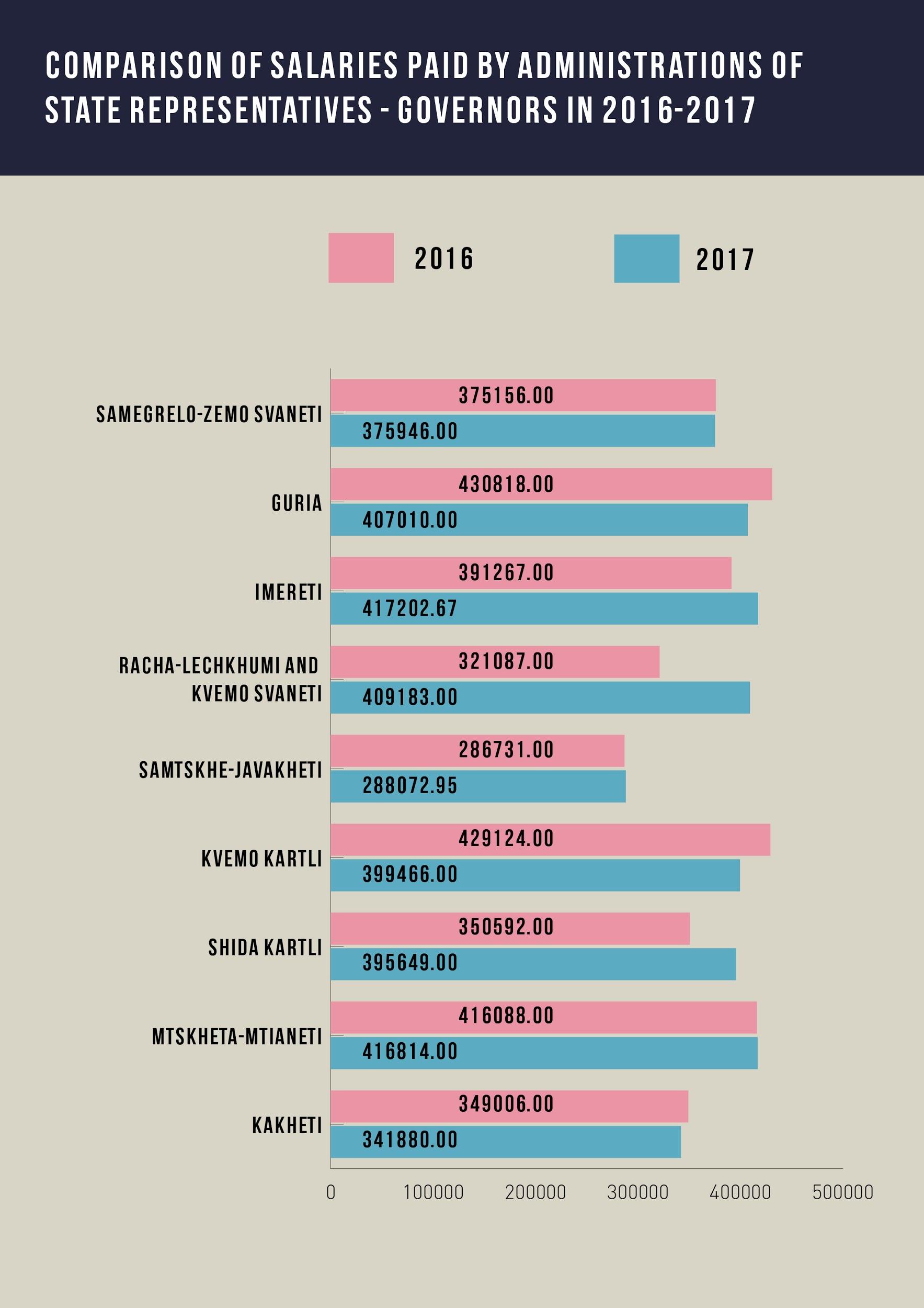 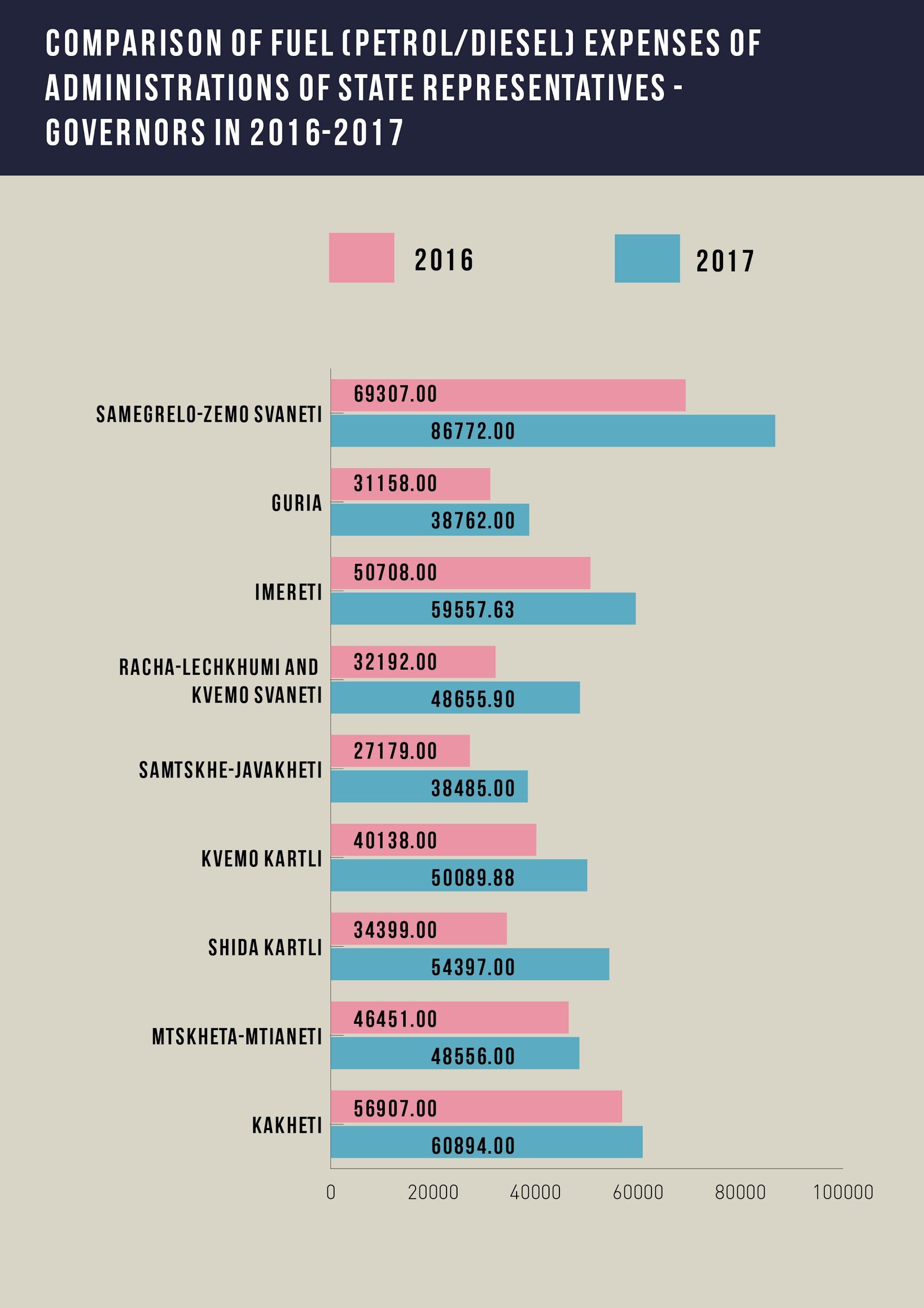 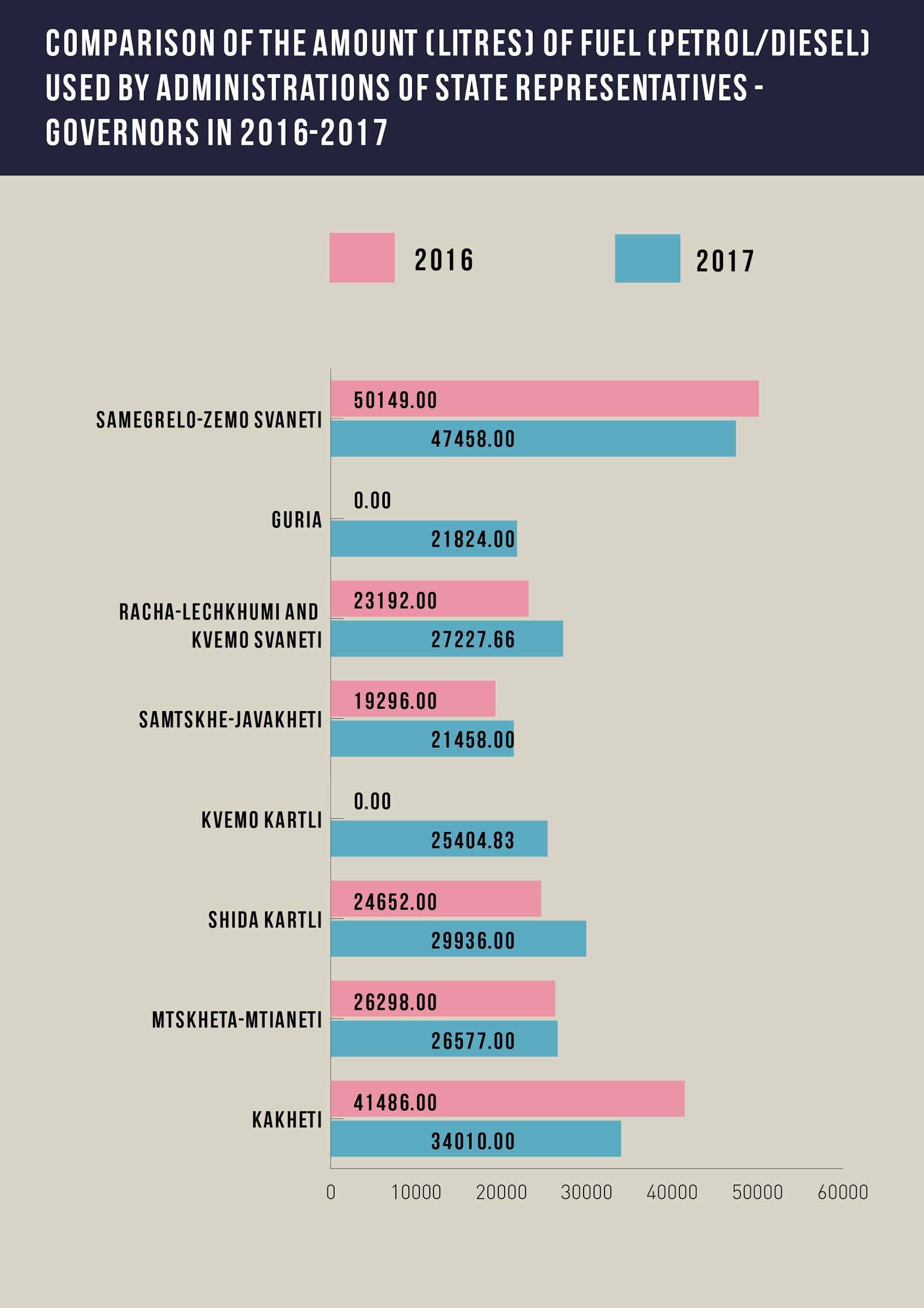 The administrations of State Representatives – Governors spent GEL 27,101.55 on telephone communication in 2017, although this information is not complete as Shida Kartli Administration only provided us with the information about the limit set for telephone communication expenses. As for employees' domestic and international business trips, GEL 60,727.97 were spent on these in 2017. 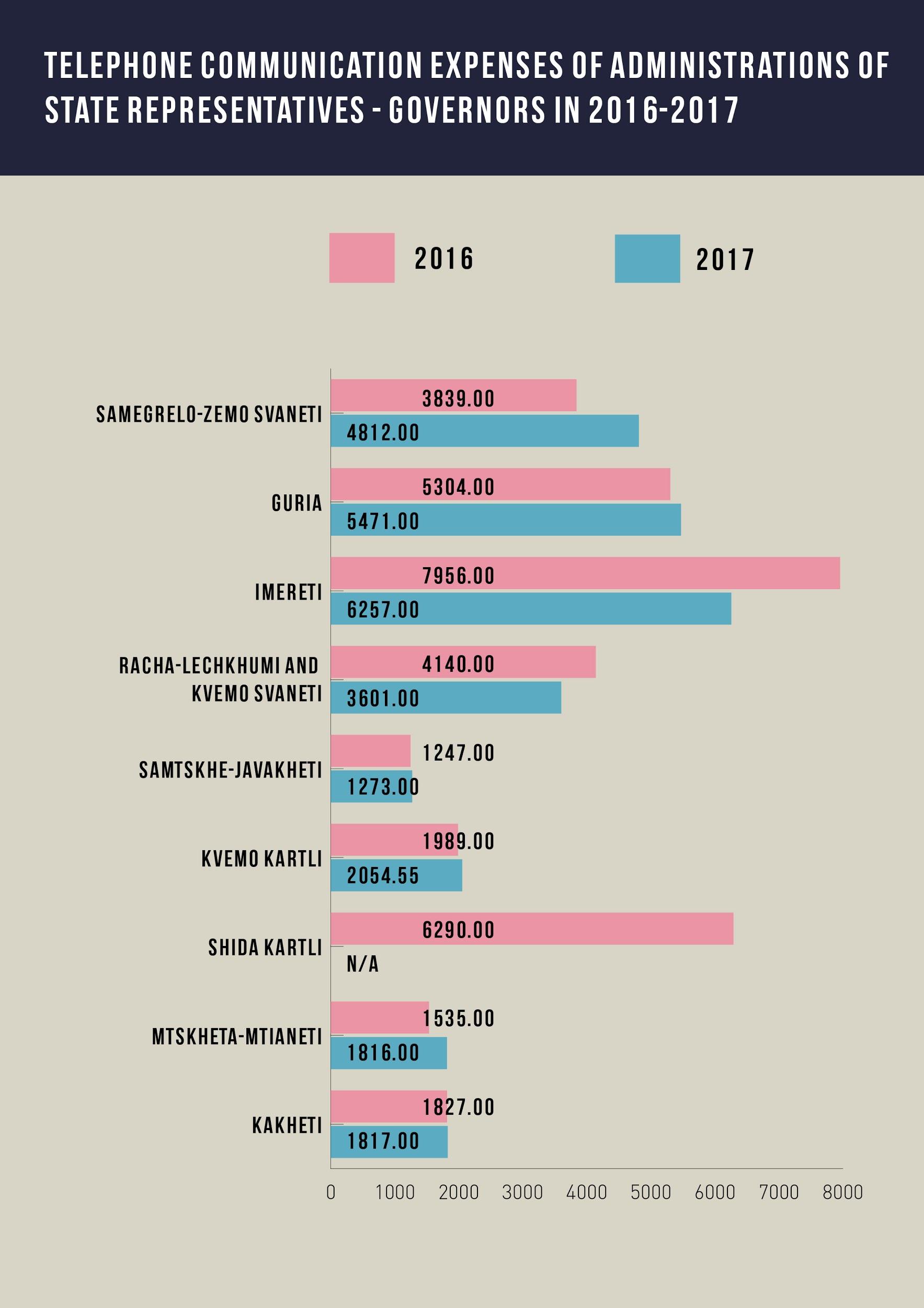 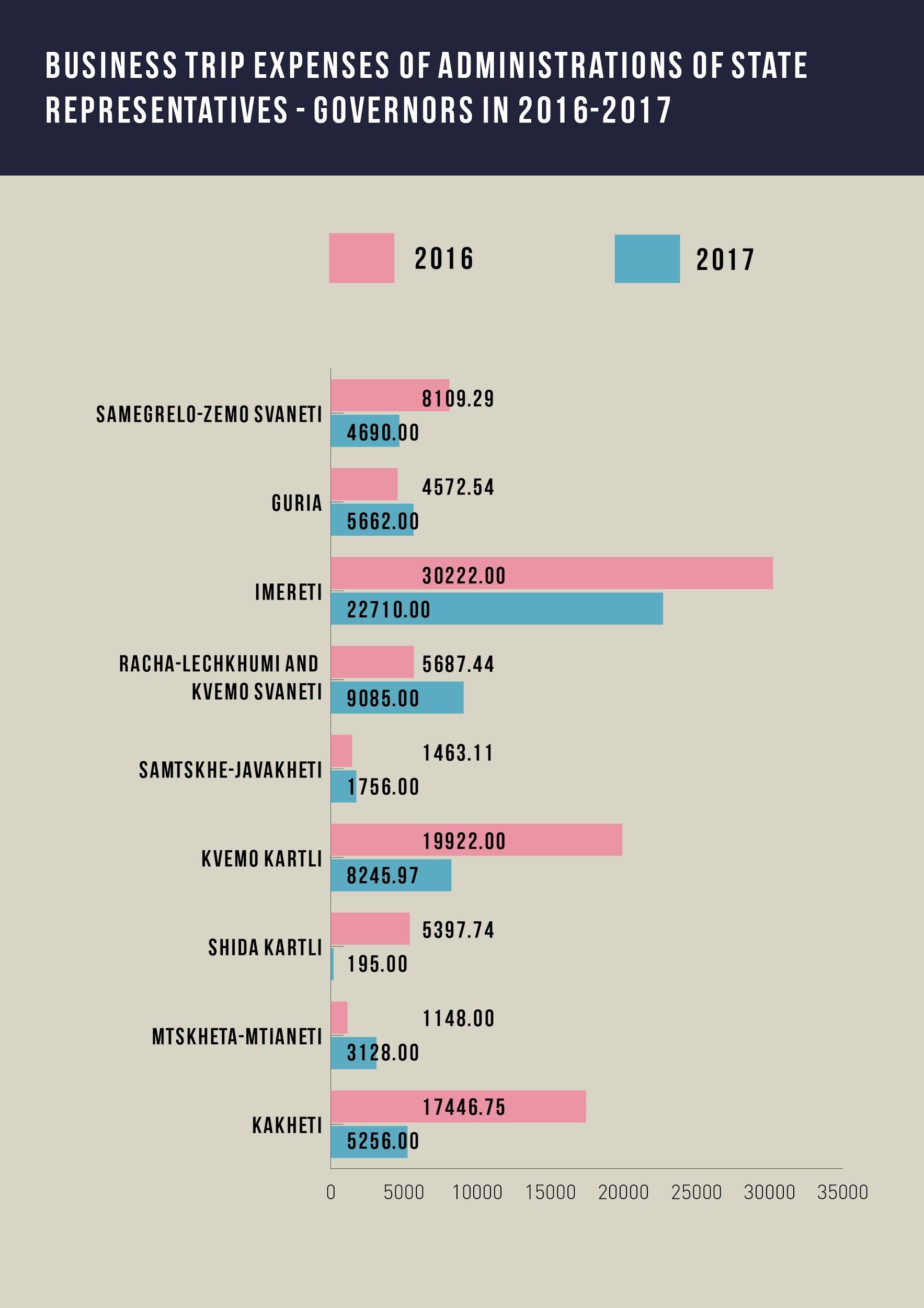 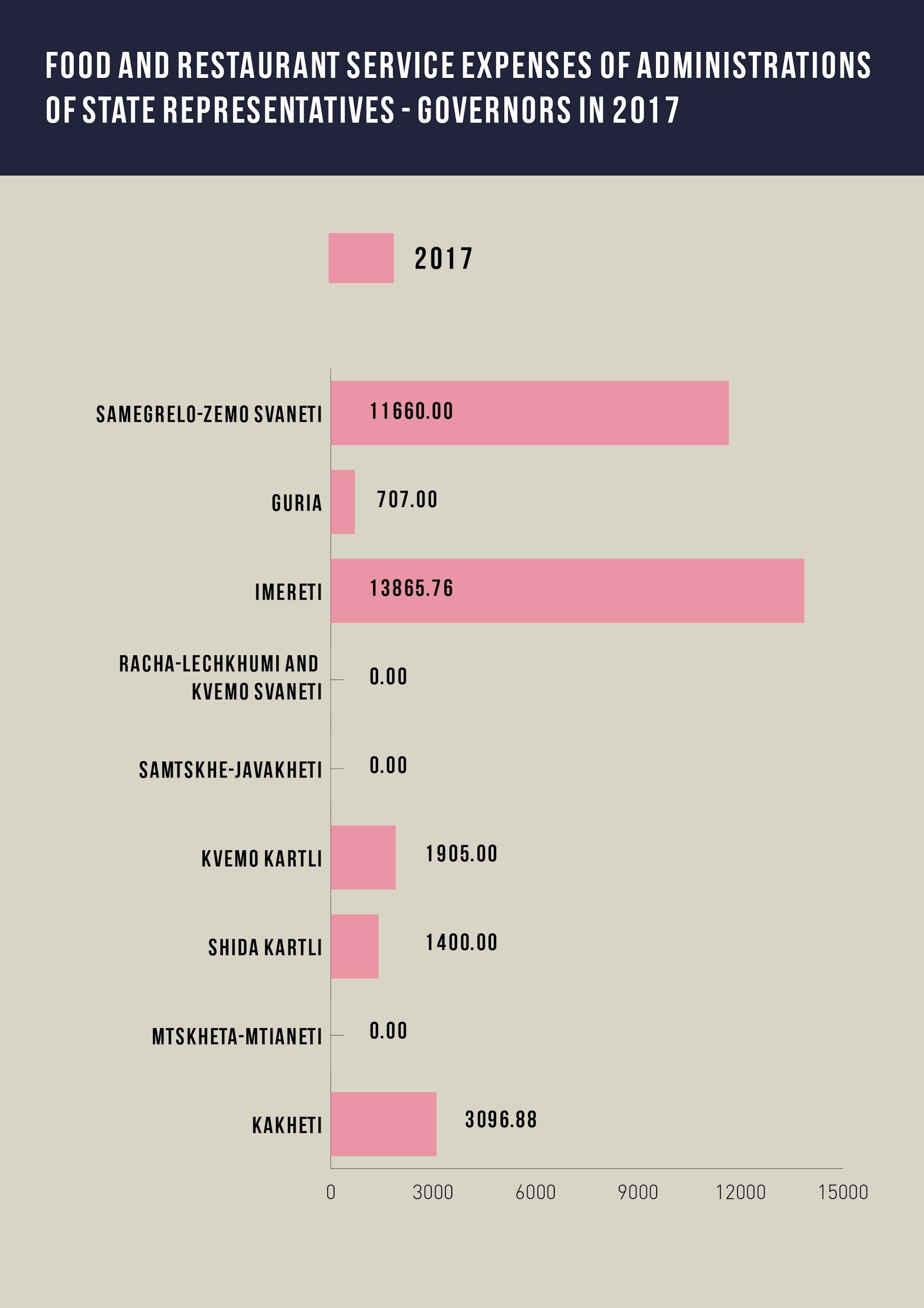 It is a welcome development that the amount paid by the administrations of State Representatives – Governors in bonuses and salary supplements as well as their communication expenses decreased in 2017 compared to the previous year. However, despite this, the practice of paying supplements to some public officials on a monthly basis remained a problematic issue.

The 19 November 2014 Resolution No 627 of the Government of Georgia On the Approval of Civil Service Reform Concept, a salary supplement is defined as a temporary increase of salary caused by various objective factors, for example, a work location or working overtime. Supplemental remuneration is assigned for a period of time during which the circumstances causing such assignment last.

According to the Law on Civil Service, a salary supplement a civil servant receives is commensurate with the overtime work performed on the superior public official's assignment; in addition, in case of assignment of additional functions, including working at night, on weekends or public holidays and when the working conditions involve health hazard.

Salary supplements were paid to individual public officials of administrations of State Representatives – Governors throughout the year, without substantiation, which contradicts the principle of paying supplements: it is safe to say that such supplements can be considered salaries. It is our opinion that such practice is not justified, and the administrative agencies must provide a corresponding substantiation of the need to pay a supplement in each individual case and to indicate the criterion based on which a supplement is paid to a civil servant.