As a result of analysis of the past four years, several noteworthy trends have been identified:

These findings make it clear that the challenges identified during the previous parliamentary cycle (the years 2012-2016) have remained largely unaddressed in this period. It will be impossible to cope with the existing challenges without a large-scale reform of the country’s anti-corruption system. A key element of such a reform should be the creation of an independent anti-corruption agency with broad powers. The relevant legislative initiative, which was prepared by a group of independent MPs and TI Georgia, was submitted to the Parliament of Georgia in September this year.

TI Georgia periodically publishes the National Integrity System (NIS) assessment. The methodology of the study is based on the opinion that prevention of corruption in the country requires the existence of strong democratic institutions. Therefore, the study contains the assessment of the activities of these institutions. 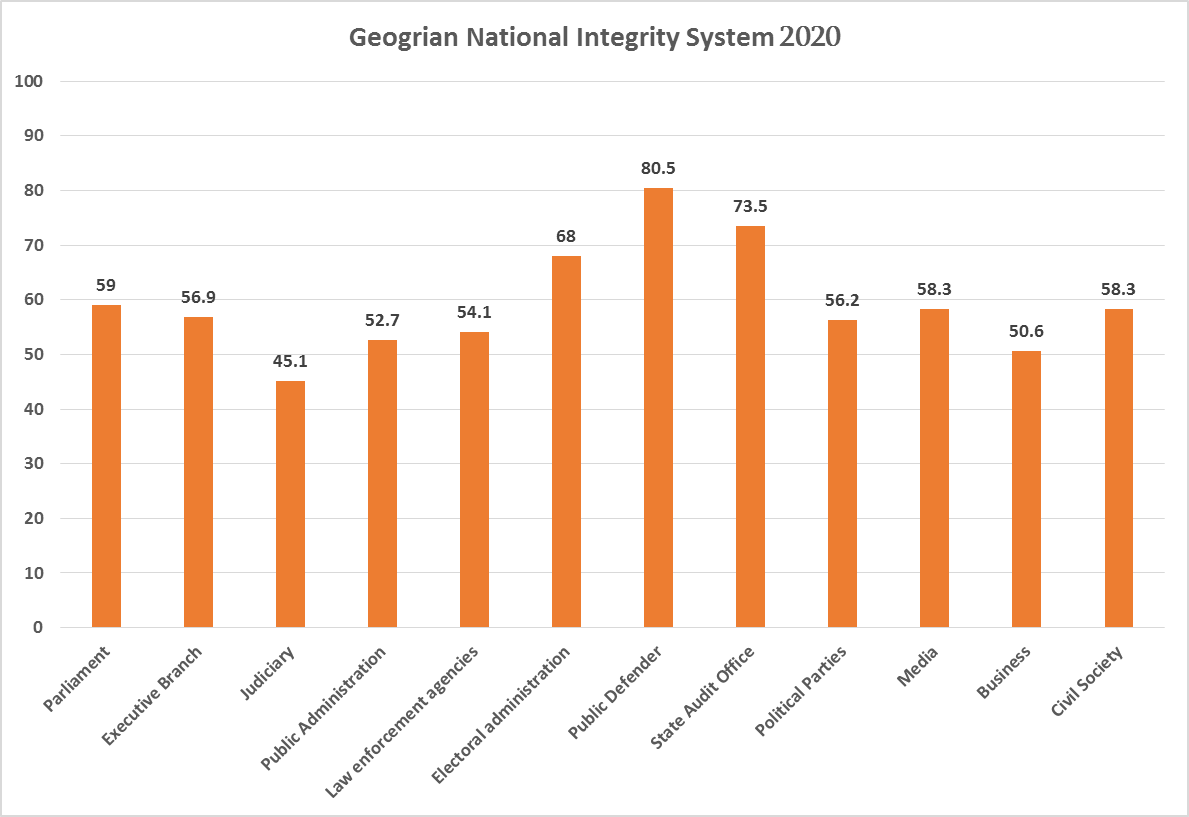 According to the study, only three out of the 12 institutions of the NIS have a score that is high or close to high. The main problems of the system include the extreme concentration of power in the hands of one party, informal influence on public institutions, weakness of political competition, and attacks on the media and the civil society.

The comparison of the results of the study of 2020 with those of the previous study (2015) points to a considerable backsliding in some of the institutions – the executive branch, the judiciary, and law enforcement agencies. Significant progress was only observed in the institution of the Public Defender. 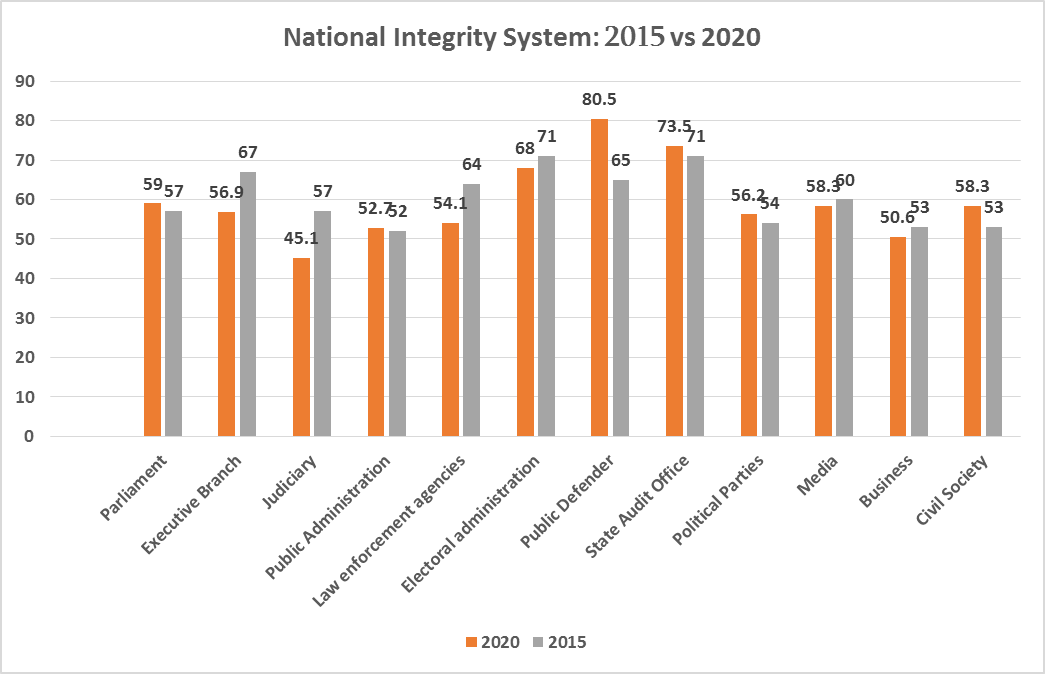 Georgia’s score in the Corruption Perceptions Index didn’t change significantly in the years 2016-2019, which points to the stagnation of anti-corruption reforms during this period. In addition, the score of 56 out of the possible 100 (2019) indicates that the country still has significant problems in terms of corruption. 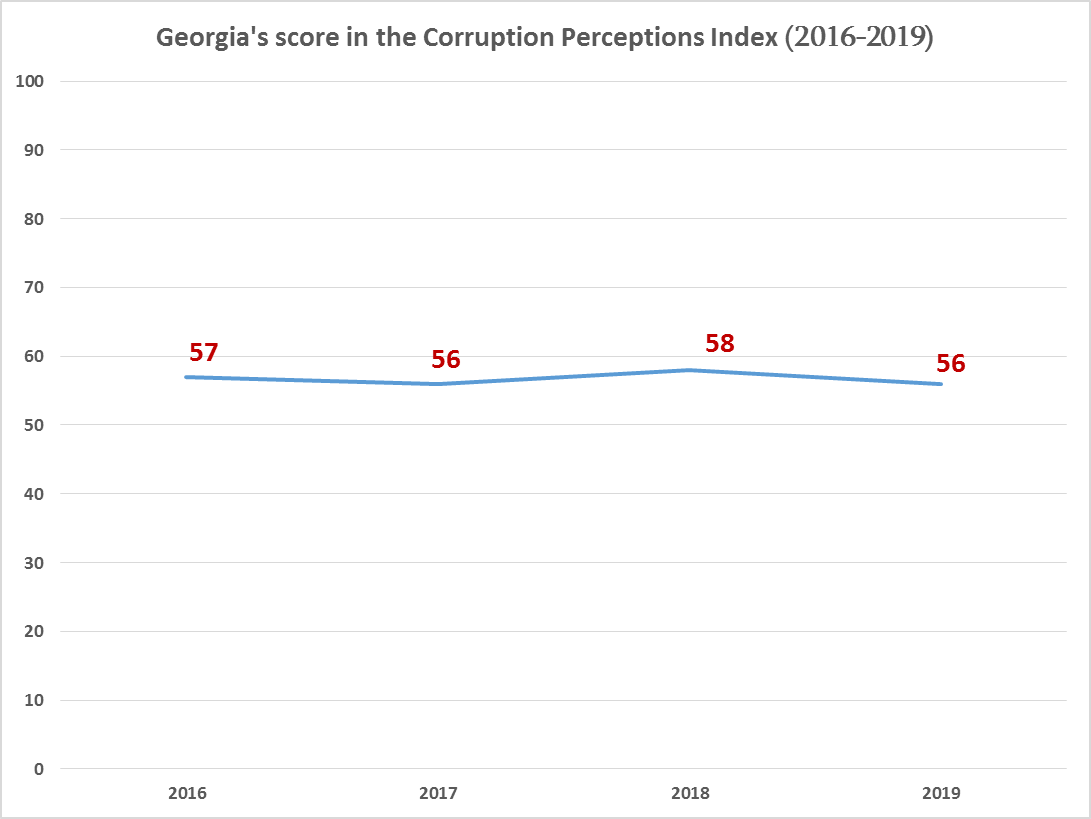 The regional report of the Corruption Perceptions Index of 2018 mentioned the following among the challenges in Georgia: “A lack of accountability of law enforcement, corruption and political interference in the judiciary, state capture and government-sponsored attacks on independent civil society”. For this reason, the organization named Georgia among the countries that required further observation in terms of risks of corruption. The problems of state capture and undue influence over key institutions were also emphasized in the 2019 report.

According to public opinion surveys, cases of petty corruption are still rare in Georgia. In the surveys conducted by TI Georgia during the said period, the number of respondents who said that they or their family members had been asked to pay a bribe for a public service never exceeded 1%. 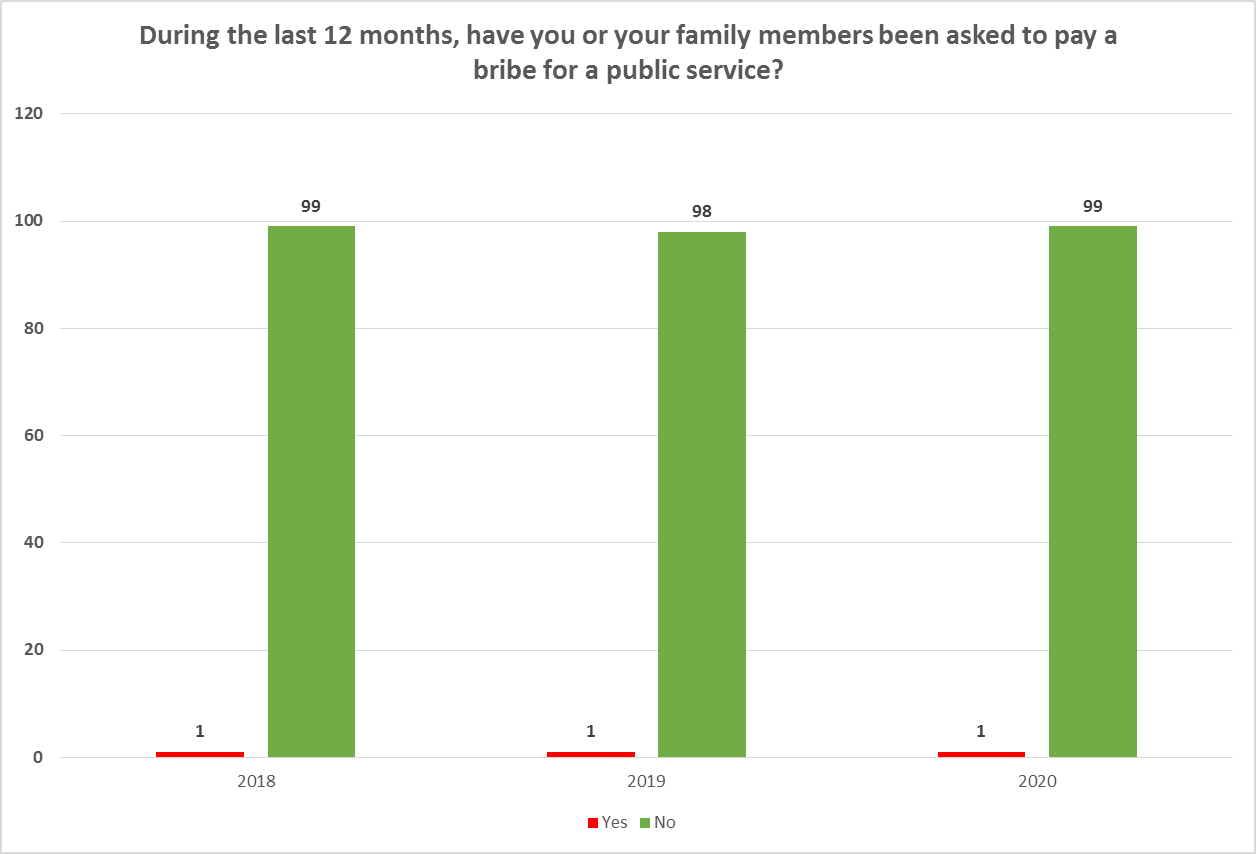 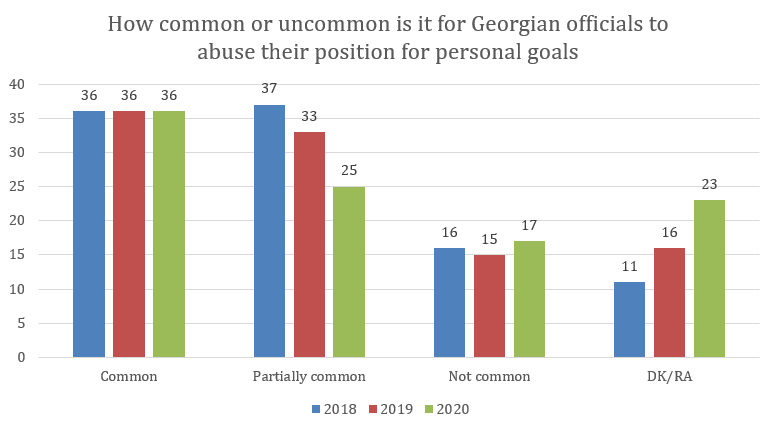 A big part of those surveyed think that cases of possible corruption are not properly investigated in Georgia when they involve high-ranking officials or influential individuals connected with the ruling party. 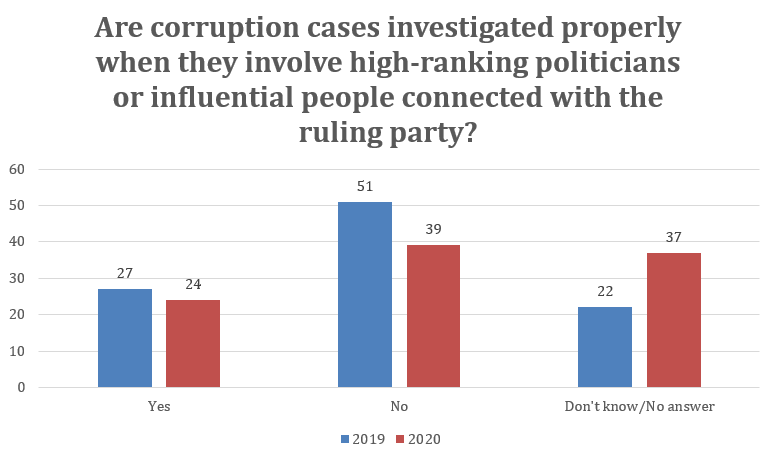 The latest strategy (approved in 2019) consists of the following elements: (1) situation analysis, (2) vision, (3) sectoral priorities for combatting corruption, (4) implementation, (5) monitoring and assessment. The sectoral priorities of the strategy are as follows: the Anti-Corruption Council and inter-agency coordination; the civil service; openness, availability of public information and citizens’ involvement; education and raising of public consciousness; law enforcement bodies; the justice system; public finance and public procurements; the customs and taxation system; the private sector; the healthcare and social sector; political corruption; the defense sector; the sector of sport; infrastructure projects; regulatory bodies; municipalities.

It should be noted that the latest report on the implementation of the Anti-Corruption Strategy and Action Plan, which is currently posted on the website of the Ministry of Justice, covers the year 2017, while the corresponding documents for 2018 and 2019 are not available.

Anti-corruption legislation and the role of the Parliament

We should give a negative assessment to a legislative amendment adopted in 2019, according to which a public official’s failure to include in an asset declaration his or her involvement in a company which has been inactive for the past six years or more no longer constitutes a violation. This amendment makes it extremely difficult for civil society organizations, media, and concerned citizens to monitor the business ties of public officials, because they are deprived of the possibility to verify whether or not a company was active during the past six years (because this information is not public).

As in the previous period, in the years 2016-2020, ensuring effective enforcement of anti-corruption legislation remained a considerable challenge. In this respect, we should mention several areas:

Regulatory norms on the so-called “revolving door” – Despite statutory restrictions, the risks of corruption related to former public officials’ transition to the private sector are practically not managed. There are no effective mechanisms for enforcing the relevant legislative norms in practice, and no agency is responsible for enforcement. As a result, all the cases of possible violation of these norms that were made public in recent years were left without a response.

Monitoring of asset declarations – In 2017, the system of monitoring of public officials’ asset declarations was put in place, which was an important positive change. However, some shortcomings of the monitoring process now complicate the achievement of the main goals of the monitoring – prevention of conflict of interest and revealing cases of illicit enrichment. The analysis of the statistics of violations revealed by monitoring in recent years indicates that the monitoring is almost entirely focused on the verification of completeness of the information contained in the declarations and that less attention is paid to revealing possible cases of conflict of interest and corruption. In the years 2017-2019, the Civil Service Bureau revealed 9 violations in total as a result of monitoring of 1,347 declarations and forwarded the relevant information to investigative bodies.

The EU-Georgia Association Agreement, as well as the 2017-2020 Association Agenda that was approved by the parties with the aim of facilitating the implementation of this agreement, implies the collaboration of the parties in combatting corruption and makes Georgia obliged to take measures to combat all forms (including complex forms) of corruption.

The main goals of the 2017-2020 Association Agenda include the following: “Ensure effective implementation of the National Anti-Corruption Strategy and Action Plan to prevent, detect and address corruption, in particular complex corruption, as well as implement the verification of the asset and income declarations of all relevant officials”.

The commitments related to combating money laundering which proceed from the Association Agreement have been fulfilled partially.

Recommendations of the OECD Anti-Corruption Network

The Istanbul Action Plan is a program launched in 2003 by the Anti-Corruption Network for Eastern Europe and Central Asia (ACN) of the Organization for Economic Co-operation and Development (OECD), which aims to facilitate anti-corruption reforms in the region by analyzing the situation in terms of corruption in each participating country, preparing recommendations, and monitoring their implementation.

The OECD ACN approved its latest monitoring report on Georgia in 2016. Together with the analysis of the situation that existed at that time, the report contained recommendations for resolving problems revealed by the monitoring. As of 2019, when the organization released the latest report, Georgia had not made progress in the majority of the 81 points of the recommendations.

Recommendations of the GRECO

In the fourth evaluation round of the Council of Europe’s Group of States against Corruption (GRECO), Georgia was given 16 recommendations related to prevention of corruption among members of parliament, judges, and prosecutors.

The recommendations that were implemented satisfactorily dealt with better regulation of the procedure of transfer of judges from one court to another; introduction of an objective and transparent system for the allocation of cases to individual judges; reduction of the influence of the government and parliamentary majority on the appointment procedure of the Chief Prosecutor and on the activity of the Prosecutorial Council; introduction of clear and objective criteria for the assignment and withdrawal of cases to/from prosecutors; and ensuring effective monitoring of asset declarations.

The recommendations that were not implemented dealt with the limitation of the immunity of judges, extension of the obligation to submit asset declarations to all prosecutors, and improvement of the system of disciplinary liability of prosecutors.

During the said period, risks of corruption in public procurements remained a problem. It is suspicious that a big part of the donations received by political parties goes to the ruling party, while donors of the ruling party receive large amounts through public procurements. For example, 84% of the donations in 2019 – GEL 7,036,166 – went to the ruling party. From January 1, 2019 to May 1, 2020, nine companies donating to the Georgian Dream and 15 companies connected with individual donors got public procurement contracts worth GEL 141,843,663. During the state of emergency in 2020, in the period from March 21 to May 22, companies connected with donors of the Georgian Dream and President Salome Zurabishvili received contracts worth more than GEL 45 million in total through direct procurement, which is 35% of the total amount spent through direct procurement during that period.

The tendency of suspicious success of companies connected with local public officials in municipal public procurements is disturbing. 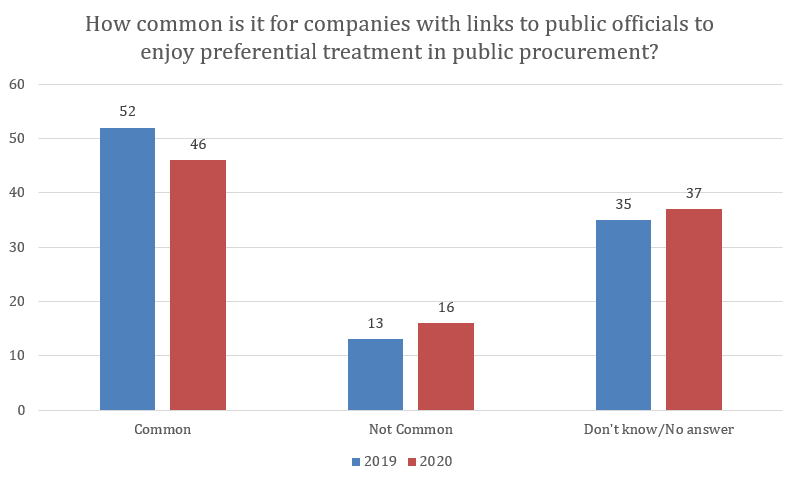 As in the previous period, in 2016-2020 too, investigation of possible cases of corruption – which allegedly involved high-ranking officials or influential individuals connected with the ruling party – remained problematic.

During the same period, cases of possible high-level corruption were left without an effective response. These include:

The European Parliament Resolution adopted in 2018 notes that “high-level elite corruption remains a serious issue” in Georgia and that the country still does not have “a solid track record of investigations into high-level cases of corruption”. The Resolution calls on Georgia to ensure that the Anti-Corruption Agency is independent, free of any political interference and separated from the State Security Service.

The overview of the situation in terms of corruption and anti-corruption policy in Georgia in the past four years makes it clear that the challenges identified during the previous parliamentary cycle (the years 2012-2016) have remained largely unaddressed in this period. At the same time, the reform of the anti-corruption legislation has practically stalled, and some problems, including possible cases of high-level corruption, informal influence on key public institutions and signs of state capture, have become even more evident.

It will be impossible to cope with the existing challenges without a large-scale reform of the country’s anti-corruption system. A key element of such a reform should be the creation of an independent anti-corruption agency with broad powers. The relevant legislative initiative, which was prepared by a group of independent MPs and TI Georgia, was submitted to the Parliament of Georgia in September this year.